Yes, an All About review series on the Nokia Lumia 1020 is coming in due course, but let me first squeeze in a quick four way imaging comparison, courtesy of sample shots from four relevant camera-centric smartphones from Matt Miller and his extensive Flickr gallery. As ever, I'll save you the trouble of downloading dozens of JPGs and working out which is which - see below for my crops from the Nokia 808 PureView, the Lumia 1020, the Lumia 925 and the HTC One.

I've taken two of the most foolproof of Matt's sample scenes (those unlikely to be tainted by line direction or moving foreground subjects) and looked at detail from each of the aforementioned camera-toting smartphones.

Firstly, a sunny tower block against the sky - and with plenty of detail at the centre of frame for analysis. 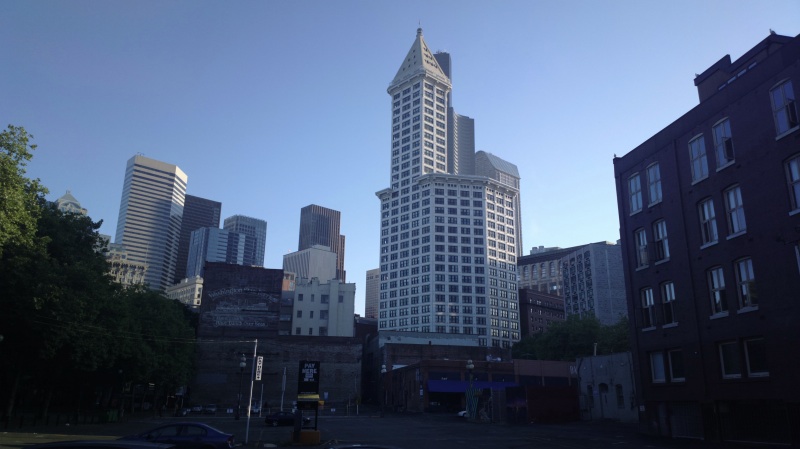 Here then are central crops from (clockwise from top left) the Nokia 808 PureView, the Nokia Lumia 1020, the HTC One and the Nokia Lumia 925, all in 5MP (or near enough, the 925 was using Nokia's Smart Camera to force it - normally it would shoot at 8MP) modes: 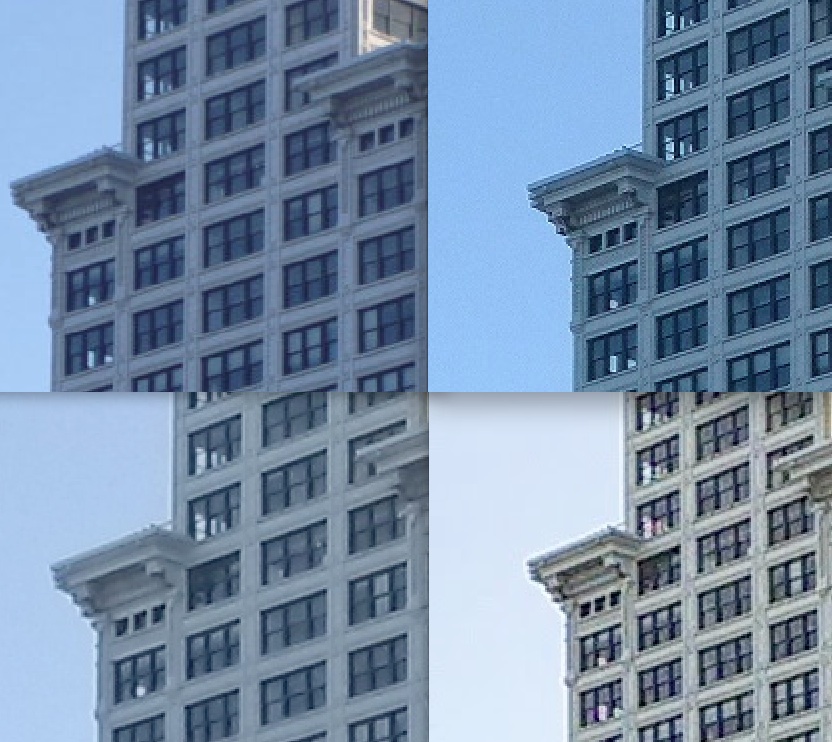 Fascinating stuff - Nokia has been saying that it has optimised the image processing in the Nokia Lumia 1020 for maximum detail in good light, which means very little noise reduction and quite a bit of edge enhancement. Looking at the top two crops, they have roughly the same amount of 'information' and 'quality' but very different characters. To the untrained eye, the 1020's crop looks much clearer, but what you're seeing is (roughly) a sharpened version of the Nokia 808's image. Notice also that there's noise in the sky in the 1020's photo - I still think that a future firmware update will tweak the image processing to get somewhere between the two images shown here.

The Lumia 925, also running Windows Phone 8, doesn't do badly, but is limited by us restricting it to 5MP here. In good light, that 8MP sensor will produce better results, though not as directly comparable here. So don't judge it too harshly. The HTC One's photo is pretty awful really. Given the size of its 'ultrapixels', I can only assume that the fault is in HTC's image processing...

Next up, a detailed nautical display in lowish light: 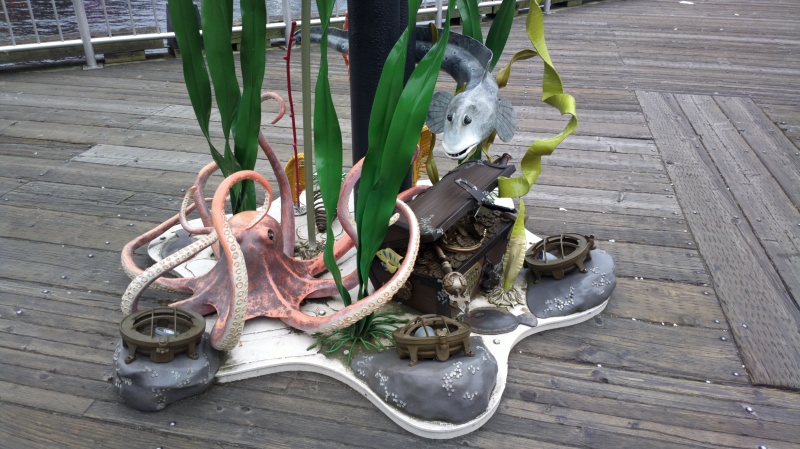 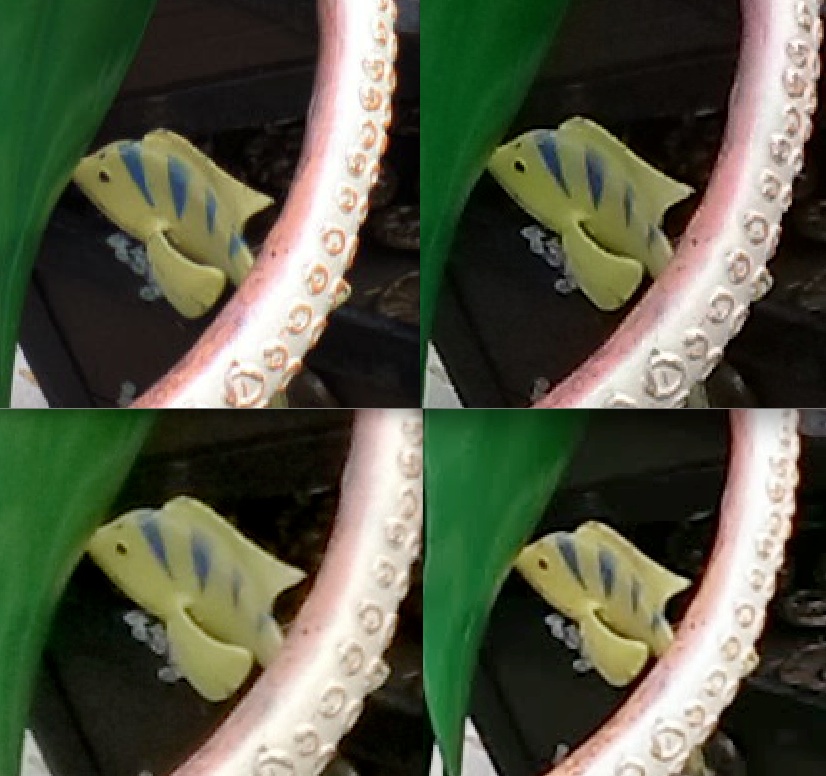 There's far less between the shots this time, perhaps aided by the absence of straight lines(!) The HTC One's photo has artefacts and isn't quite as clear, while the Lumia 925 again impresses beyond its 1/3" sensor (and would do better if allowed to go up to 8MP).

The Nokia 808 and Lumia 1020 battle it out again, with the 808's image looking the most natural and the 1020's showing edges that are over-sharpened and pixellated, but generally presenting content clearly to the casual observer (and remember that I've cropped in quite savagely here). I do feel as if it could do with a tweak along these lines, mind you.

Of course, these photos are just two more quick data points (thanks Matt, see his Flickr stream for all the original images, and/or if you fancy doing some comparisons yourself) and, though controlled, didn't exercise any of the extra capabilities of the Nokia 808 or Lumia 1020. We'll be returning to image comparisons in a lot more detail when the Lumia 1020 is finally in house and when we've had enough time to play with it.

The 'character' of the Lumia 1020's camera, relative to the 808 PureView's, is starting to become a lot better known now. We established yesterday that the Lumia 1020's 41MP camera worked in a slightly different way to that in the 808, with far more being done in software and less in a dedicated imaging chip. The downside of that approach is that the 1020's 'oversampling' isn't perhaps going to be using as powerful a pixel reduction algorithm as on the 808, but the considerable upside is that it's far more configurable. Nokia calls it 'adaptive oversampling', meaning that the processing parameters change according to the light conditions and camera mode.

Typically, when coming up with a set of image processing algorithms, a manufacturer like Nokia would try out hundreds, nay thousands, of test shots and iterate until it was felt that the best formulae were being used. Despite my feeling that there's just a little too much sharpening going on with the current set-up, it's early days. Let's give our own team time to run the 1020 through our own test shots and Nokia time to tweak the firmware if needed (remember that the Nokia 808 went through several firmware updates in the initial months, to patch up the camera slightly).