It's a fair cop, I'm firmly in camera geek territory again here. We see a lot of smartphone camera comparisons online (not least here on the All About sites), but all this talk of optical formats and pixel sizes rather gets in the way of the man in the street understanding the simple physics involved. To help out, I've summarised all available data on smartphone camera sizes and apertures and present the result graphically. So the Lumia 1020 has a 1/1.5" sensor - what does this mean? And how does it affect the ability of the device to gather light? This and much more below...

The 1/n" optical format specification is all a bit confusing, referring to an obscure equivalence to the 'old' camera world. But the numbers are all relative to each other in the right proportions, of course, with the sensor area of each smartphone camera going roughly as the square of the optical format number.

Don't worry, we've done the maths for you and have represented the sensors graphically below. Your browser will probably downsize the image anyway, so note that the absolute sensor sizes are smaller than they appear on your screen (even the very largest is, in real life, not much bigger than a square centimetre!): 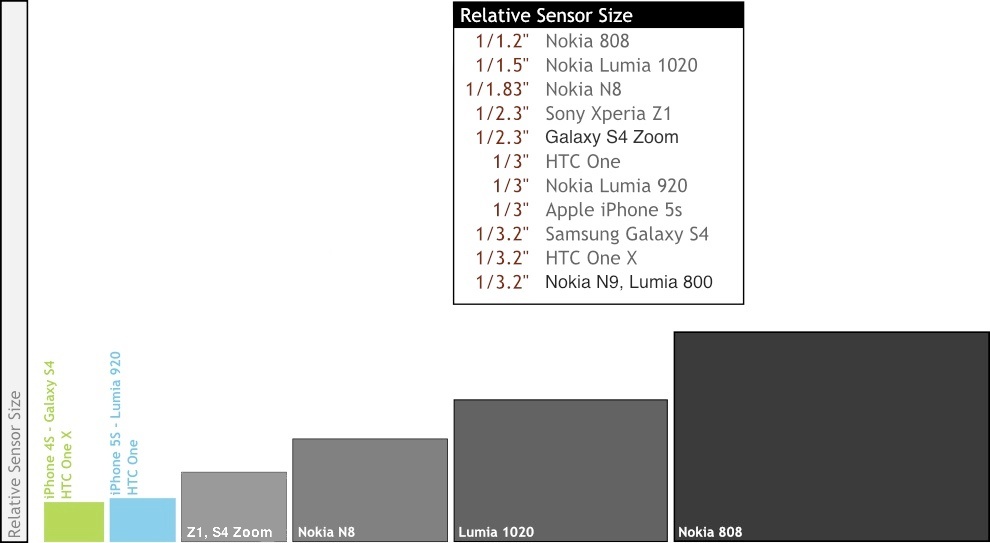 The differences in sensor size are quite dramatic - remember that 'square' factor mentioned above? So, for example, Apple made a big thing of making the sensor bigger for the iPhone 5S camera. In the chart, going from the green rectangle to the blue one. Now compare that sensor size to that in the likes of the Nokia Lumia 1020 or 808 and you start to see why the latter two phones keep winning out in camera comparisons when conditions get tough - ultimately, physics/optics play a huge part in how well (phone) cameras perform.

Surprisingly, even the much vaunted 'large' 1/2.3" sensors in the Samsung Galaxy S4 Zoom and Sony Xperia Z1 seem tiny compared to the monster sensors in Nokia's camera flagships.

Now, there's more to camera performance than physical sensor size, of course, which is why more maths is needed. There are other optical factors like aperture size and whether the sensor is Back Side Illuminated. Plus there's the whole image processing chain, converting the raw light input through Bayer filtering, oversampling (if relevant, e.g. on the Nokia 41MP sensor devices and the Sony Xperia Z1) noise reduction, colour corrections and sharpening. And, at the end of all of this, a photo is produced!

The image processing chain varies according to manufacturer, smartphone platform, device and firmware version number, but we can at least get a handle on the raw light gathering ability (LGA) of each smartphone camera with some more maths.

In order to estimate LGA, for each device under consideration, I took the quoted optical format and:

With the (somewhat hairy) maths done, the LGA table for all smartphone cameras considered looks like this (sorted from highest amount of light gathered to least):

As with the graphical chart earlier, the gulf between the two Nokia PureView flagships and the rest is larger than you'd expect. So, even when we factor in aperture and BSI, the Nokia 808 and Lumia 1020 have roughly three times the light gathering ability of their nearest challengers. And note that nowhere in any of this analysis have I mentioned 'megapixels' - the actual resolution that the manufacturer chooses to implement, i.e. how to divide up the sensor, is largely irrelevant for this analysis.

The extra step mentioned above is 'image processing', of course, an amorphous factor which is hard to pin down. Plus there are other factors which you have to take into consideration when trying to decide which smartphone camera is 'better':

This mass of caveats and extra factors not withstanding, I thought you'd find the comparison chart and table interesting - and hopefully worth bookmarking or sharing.

PS. Watch this space for more real life test photo testing comparisons. Lumia 1020 vs Sony Xperia Z1 is the next big one to look out for.

PPS. Thanks to Manpreet for his help with the graphic.