What difference does a Snapdragon 800 make to Windows Phone performance?

As we noted in our in depth review of the Lumia 1520, Nokia's most recently released smartphone is the first Windows Phone device to be powered by a Snapdragon 800 SoC. The quad-core (2.2 GHz) processor is clearly a significant upgrade from the dual-core (1.5GHz) processor used in the previous generation of high-end Windows Phone devices, but the critical question is what impact does this have on overall performance?

Looking at the benchmark scores from WPBench the extra performance theoretically available with  Snapdragon 800 (MSM8974) is self evident, with the figures suggesting the Lumia 1520 is roughly twice as powerful as the Lumia 920 / 925. However, while benchmarks are useful as an indicative measure, what really matters is how a device performs in day-to-day usage. 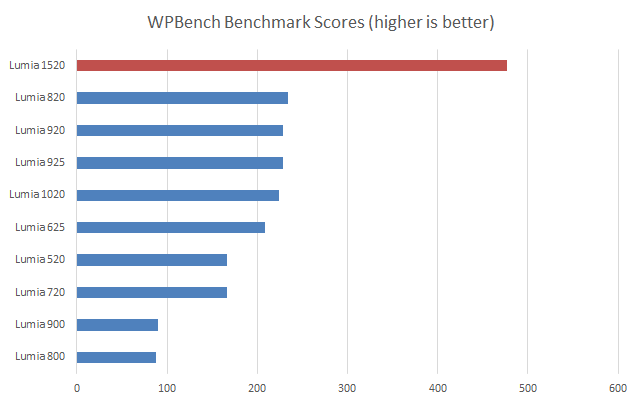 For the built in app there's no discernible difference between the three devices, underlining Windows Phone's excellent performance credentials on lower specification devices.

However, it is a different story for third party apps. The Lumia 1520 is the fastest, followed by the Lumia 925, with the Lumia 620, as you would expect, in third place. The difference for most  third party apps is relatively small, such that most users are only going to notice the one-step difference if they do a side by side comparison, but it does become more noticeable for resource heavy, or poorly implemented, apps and games. Device start-up time, arguably the least important metric assessed here, also shows a difference, but the difference between the Lumia 1520 and 925 is small, representing only a small fraction of the overall start up time.

In more general performance terms there are differences when performing resource intensive tasks within an app, such as the creation of a panorama in Microsoft's PhotoSynth app. Another example of a resource intensive process is the rendering of large web pages (2MB+), but, as with most app specific tasks, it is difficult to measure this objectively (e.g. the need to take into account network conditions, differences in non-processor hardware elements, and other factors).

The key point from the video is that while Windows Phone performance is a better on the Lumia 1520, the difference, for some of the basic app performance measures, is not as big as the raw specifications might suggest. This reflects the fact that Windows Phone is arguably the most efficient of the major smartphone platforms, able to run core smoothly on a wide range of hardware.

So what's the point in having a Snapdragon 800 inside the Lumia 1520? Firstly, there is a performance difference, secondly some of the extra power goes into driving the higher resolution screen of the Lumia 1520 (480p versus 768p  versus 1080p), thirdly there are performance elements we haven't discussed above (e.g. shot-to-shot time for the main camera is twice as fast on the Lumia 1520 than the Lumia 1020), and fourthly it helps future proof the phone.

The last of these points is the most important. The current app and game performance constraints are set by the specifications of the existing devices. The Lumia 1520 significantly exceeds these constraints, which means it, and its sister devices, will be able to run apps and games at levels the current devices can not (e.g. run a game at higher frame rate, colour depth, or resolution).

Filed: Home > Features > What difference does a Snapdragon 800 make to Windows Phone performance?