The subject here is Store bloat. And it's something which I've been ranting about now for four years, on various sites. Yet the people in charge of the main smartphone app stores haven't learned. In fact, if anything, they're getting worse.... at letting in 'apps' which mainly serve to dilute the world's overall impression of that particular OS and ecosystem. Here are three questions that the QA employees concerned should be asking themselves before hitting the 'approve' button.

Author's note: This article is hosted primarily on All About Windows Phone and the examples quoted are from the Windows Phone Store, but the principles apply to the Nokia (Symbian / Series 40) Store too, which is why I've tagged it for All About Symbian as well. And yes,  I know that the Nokia Store has now frozen for Symbian users, but all this applies/applied to that Store's frozen content too. Plus it applies to the Android and iOS application stores, lest other platforms feel left out!

Let's start with the straws that broke the camel's back in terms of my motivation for writing this piece... Candy Crusher Saga Pro for Windows Phone. Candy Crush Saga is a top-grossing freemium game on other platforms and the Windows Phone world has been eagerly awaiting it too. And along comes the aforementioned, a similar game with an extremely similar and therefore misleading title, yet inferior production qualities and evidently not the real thing. How was this allowed through the QA process in Microsoft's Store approvals department? I accept that 'clone' games are perfectly acceptable provided they play well enough and don't cause too much confusion. But in this case, the game title includes every character from the branded original. Did no one stop and think "Hmm.... isn't this just going to confuse users and players? Maybe we should ask the developers to find a different name?" Apparently not. 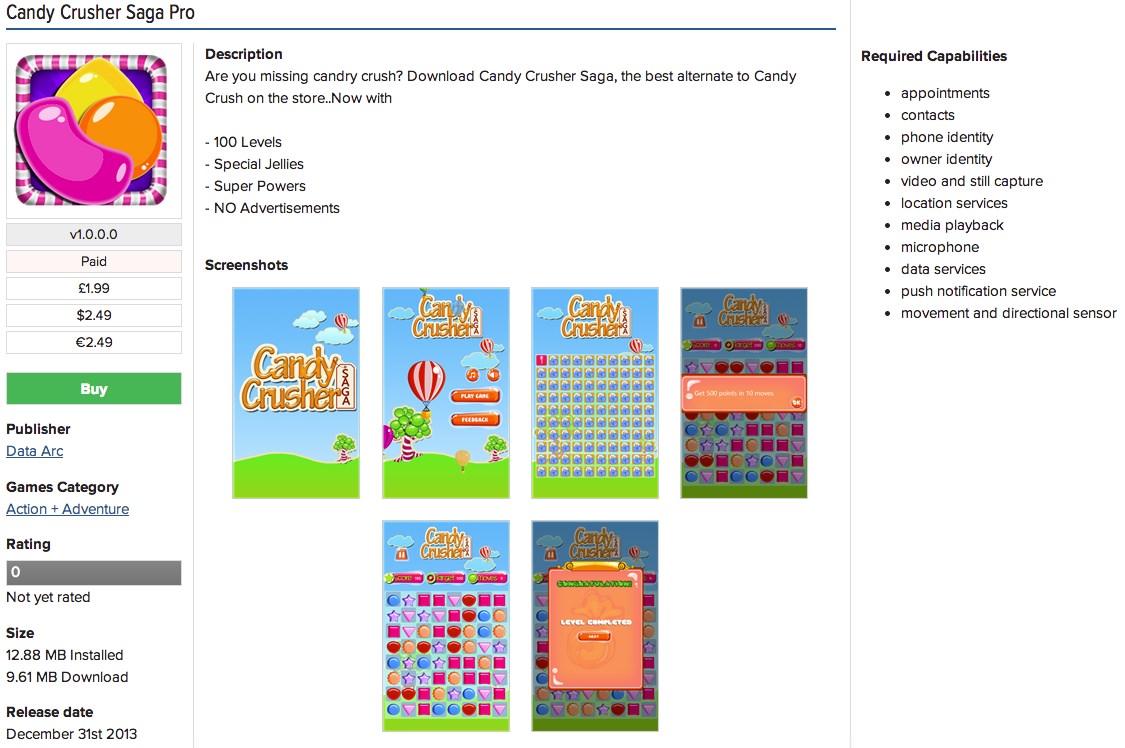 The listing for the Candy Crush 'clone' - I'll come back to those right hand permissions later, below...(!)

When an application/game is submitted to any mobile Store, there are a number of checks that have to be made, most of them legal or technical - are any manufacturer brands used without permission, is there offensive content, does the title crash the smartphone OS, does it terminate properly if asked to do so, and so on. As far as I know, there are no 'common sense' questions asked at all.

There's not even a basic check for a duplicate name. As was evidenced by another 'straw' from yesterday, as part of my research into guitar tuners for Windows Phone. It turns out - get this - that there are up to fourteen (depending on how you count) applications called "Guitar Tuner" in the Store. Fourteen. To misquote Sheldon from BBT: "In what universe could this possibly be allowed to happen?" What goes through the mind of a Microsoft Store QA  employee as he's looking at the fourteenth application called "Guitar Tuner"? How do his neurons ever get to the point where they trigger the motor action to click on 'Approve' on his or her screen? 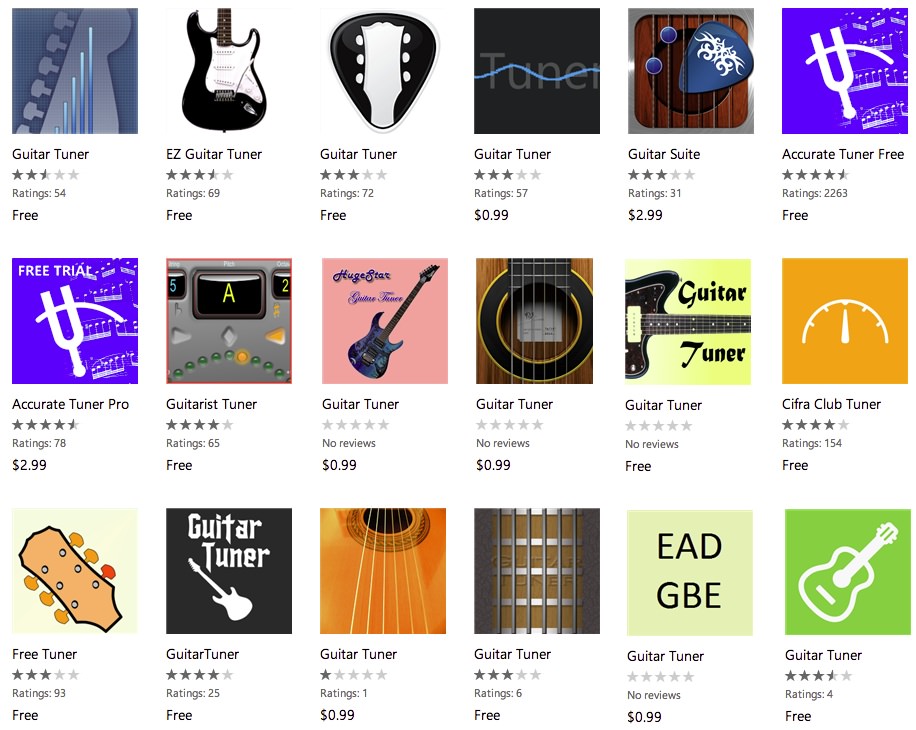 11 "Guitar Tuner"s from the first few screens in the Windows Phone Store, plus some other variants for good measure...

And this is just the tip of the iceberg - looking through the raw 'new apps' feed (which we get access to as part of the AAWP back end) is shocking - something like 80% (figure justified below) of all applications seem to be irrelevant cash-in novelties of one sort of another.

I'm sure you can think of plenty of other examples of items in mobile app stores which are little more than a confusing waste of space.

Now, thankfully, when you look for 'new apps' here on AAWP, we present you with those that are 'featured' and thus curated to some degree. But the poor user, when searching the Store on their smartphone (whether WP or Symbian or iOS or Android), has to wade through the full mass of detritus.

I've been ranting and railing for years that mobile app stores should be better curated, but the people behind each Store and ecosystem merely seem to want the application 'number' to keep rising and don't seem concerned at all with the quality of the applications themselves. I got so fed up with it on Symbian that I even compiled my own (low tech) curated list of the best apps and games - the only ones you actually need. Such an exercise on other platforms would be a little impractical because even a curated store would number in the thousands of titles. But put (say) four thousand into perspective against getting on for 200,000 in the Windows Phone Store [and up to a million in the iOS and Android stores]. Am I really saying that 98% of titles in the Windows Phone Store are worthless and shouldn't have been allowed in, in the first place?

Yes. Well, maybe. In addition to the 2% of 'essentials', I'll accept another 18% that are simply very 'niche' - typical longtail apps. But that still leaves 80% of Store content which falls into one of the damaging classifications listed above.

So, I'm working in a mobile Store approvals centre. I've checked that app/game XY doesn't crash my four test phones, nothing in its branding or graphics looks likely to offend anyone or cause legal issues, what questions should I also ask before approval? How about:

If either the answer to any of these questions is 'Yes', then I'd politely decline the Store submission, replying to the developer with some boiler plate text explaining why.

What do you think? Would such common sense questions help keep the dross down and improve your Store experience? Would you rather have a Store with 'just' 30,000 applications but all of them worth looking at?

PS. In case you think Apple and Google do a better job in their app stores, try searching for 'Guitar Tuner' on an iPhone or Android device. Same deal, same issue, same lack of common sense.