Podcatchers aren't the only app genre on Windows Phone that has seen a lot of competition - sound recording utilities is another genre that's worth taking a slice across. What follows isn't necessarily (yet) definitive, but I've tried to pick all the most likely candidates - so start with these. Whether you want to record your band, your voice or your baby, there's something for you below.

In contention here we have:

Much as I'd love to test each with bird song in Cornwall and at the front row of a Motorhead concert, practicality prevailed. I used live acoustic music as my test case though - a.k.a. my 12 string played at almost point blank range (around 30cm). The dynamics of a steel strung 12 string acoustic guitar should show up any tendencies to over-compress or frequency restrict the respective recordings. I then listened to each recording through 'pro' over-ear headphones.

In addition to top quality, I was also looking for:

Unique in the applications featured here, Audio Recorder Pro gets its audio signal directly from the phone hardware. This allows it to record audio with up to 96kHz sampling rate (as used in professional studio audio processing). In contrast to the typical 16kHz sampling rate available through Microsoft's official APIs, as used by all the other apps, Audio Recorder Pro's captures are of tremendous quality, limited mainly by the quality of the phone microphone itself. My guitar test was full bodied and you could hear both high and low frequencies. The only quibble I have is that automatic gain control occasionally produced distorted audio artefacts - but overall very impressive.

Add in a straightforward interface, with a full feature set, foolproof operation (with large main button and 'VU' meter display) and excellent archiving/backup and it's clear that Audio Recorder Pro sets the bar very high. 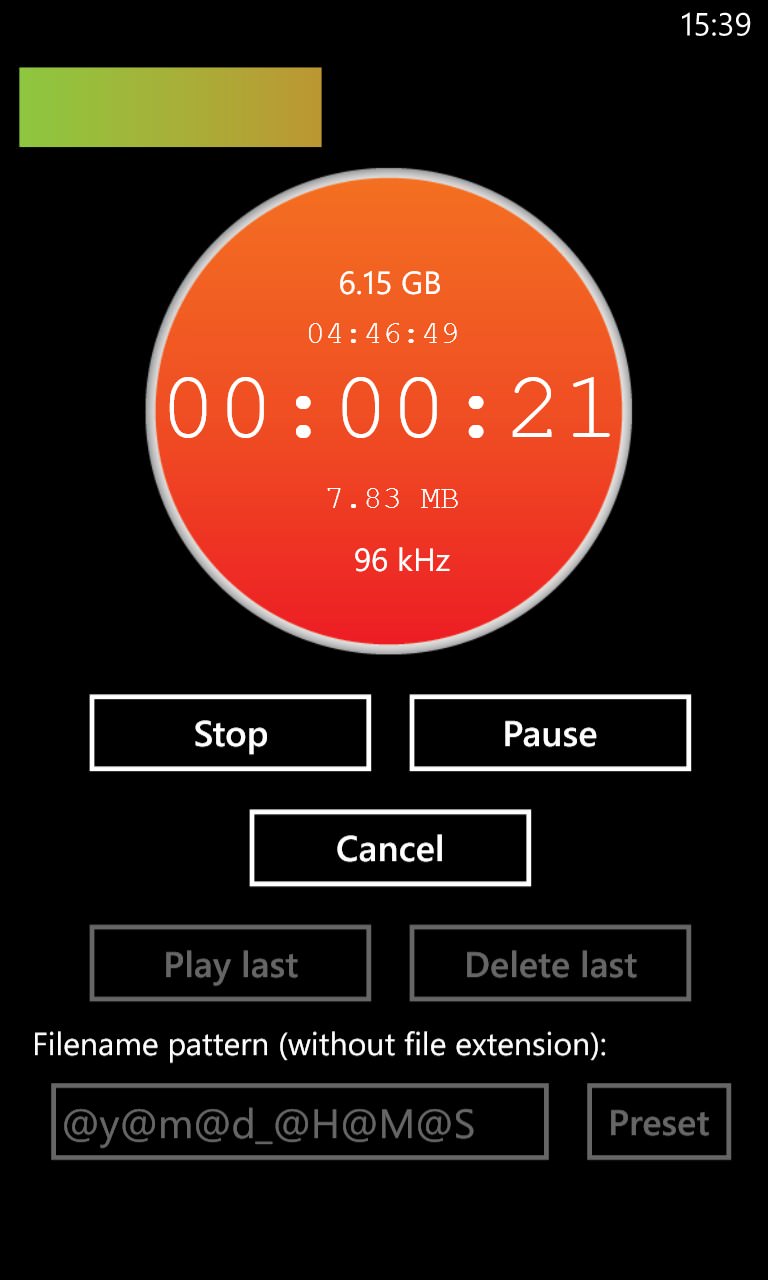 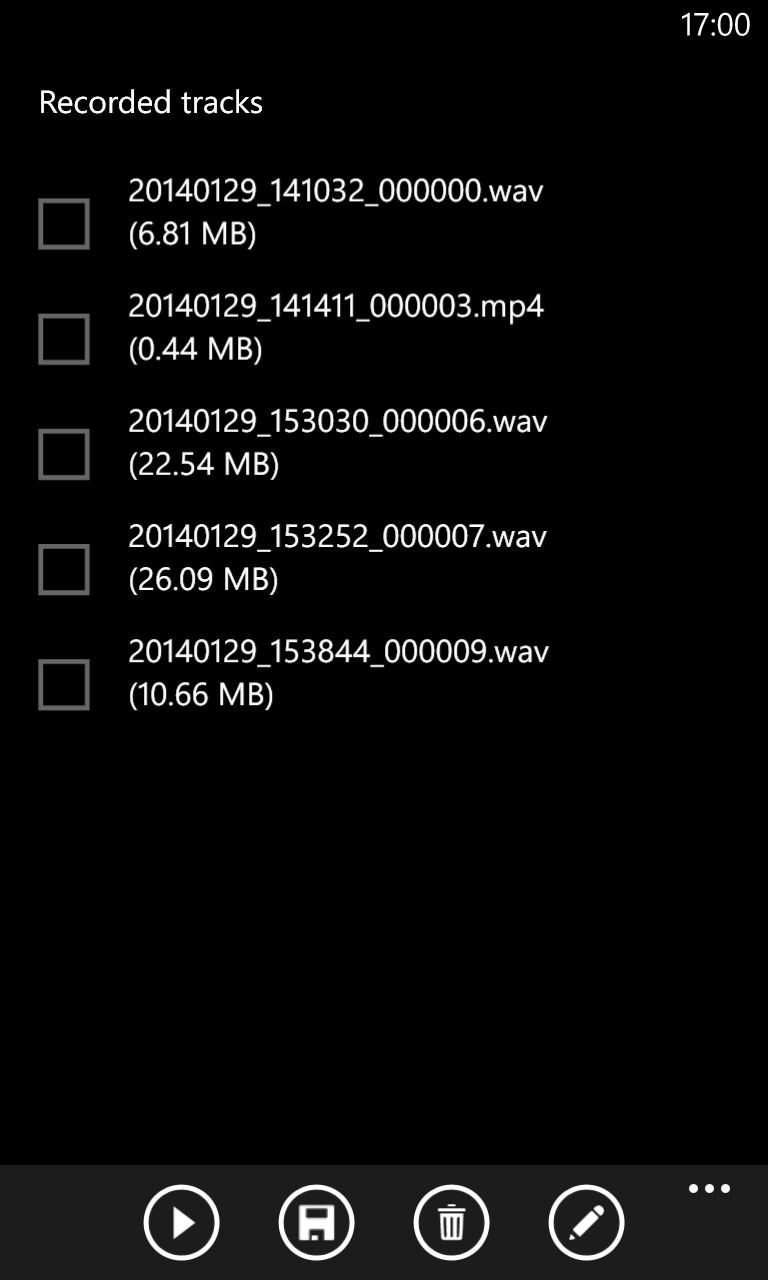 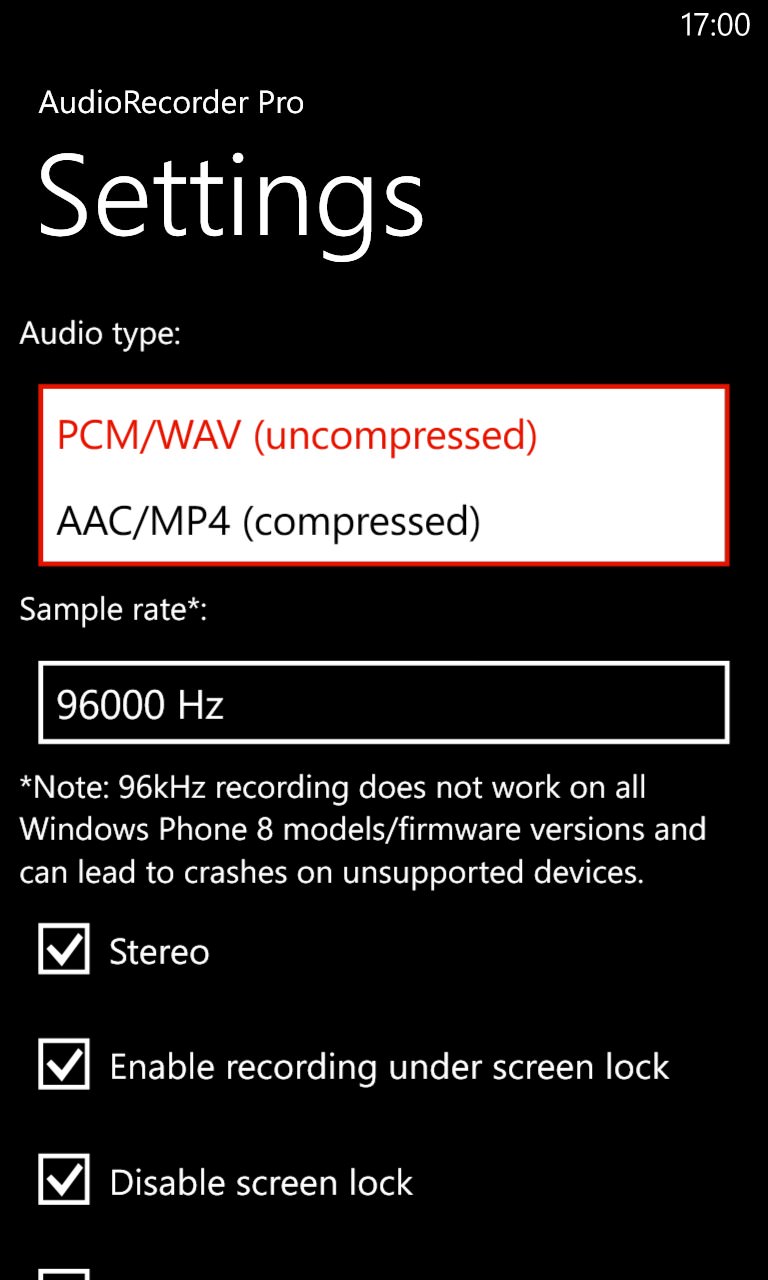 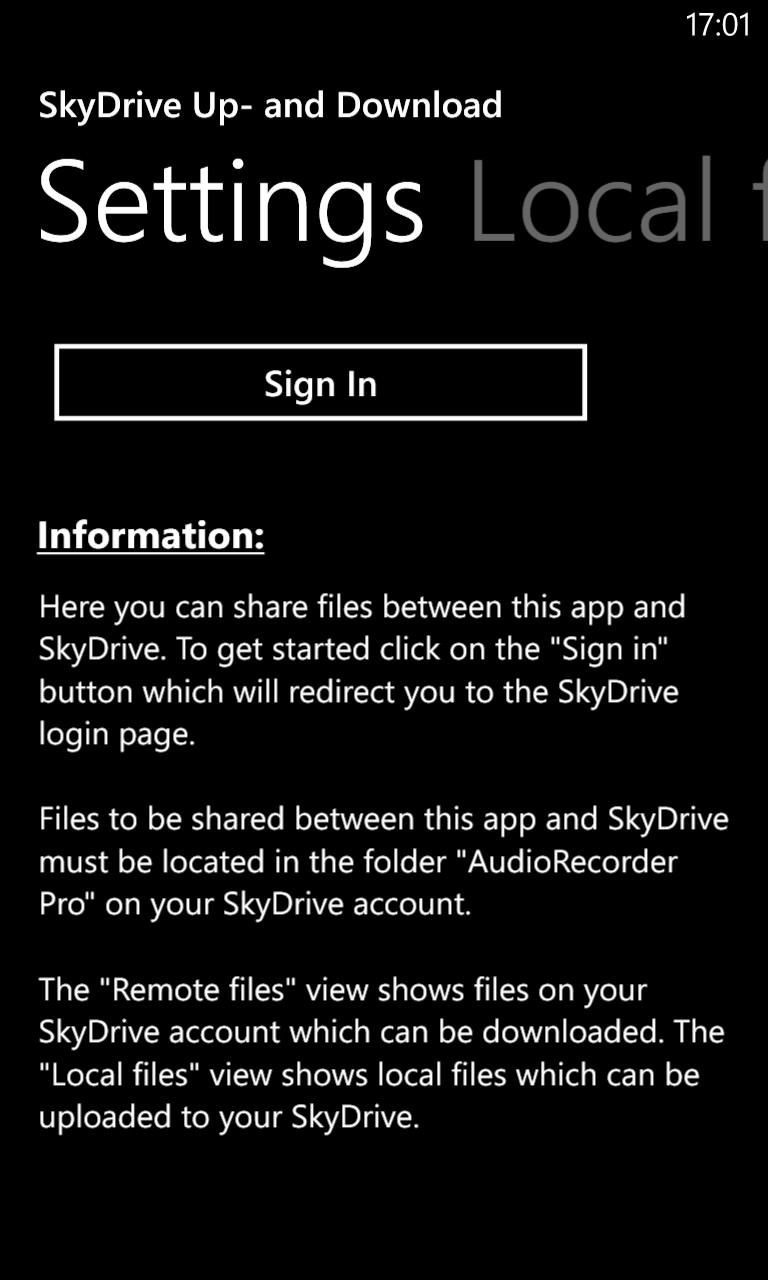 * Not explicitly, but by using the Windows Phone playback volume control, you can long press and hold to nudge forwards and backwards, albeit very imprecisely.

** And to Dropbox as well

We're back in the world of standard Windows Phone APIs here, and limited by the sampling rate that the OS makes available to 'normal' third party applications, i.e. 16kHz - as a result, recordings are acceptable for voice, but flat and tinny for music. Of special note is that if you try recording with your headphones plugged in as well, the gain gets screwed up horribly and the recording is very distorted.

The UI's simple - just tap the counter to start and tap to stop again, while 'View recorded' brings up everything stored so far. Of special note here is that, while recording, there's a pleasant volume-related colour tile effect that animates - very cool indeed even if it's little practical use! 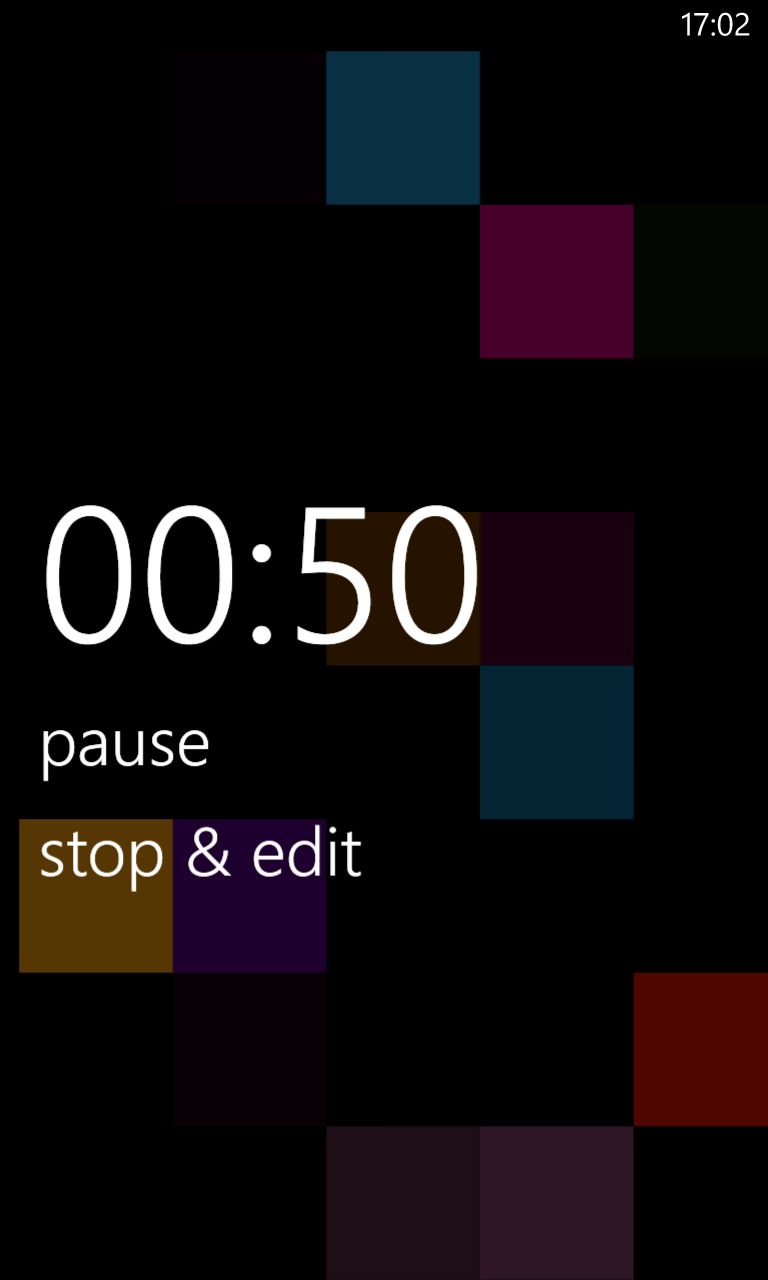 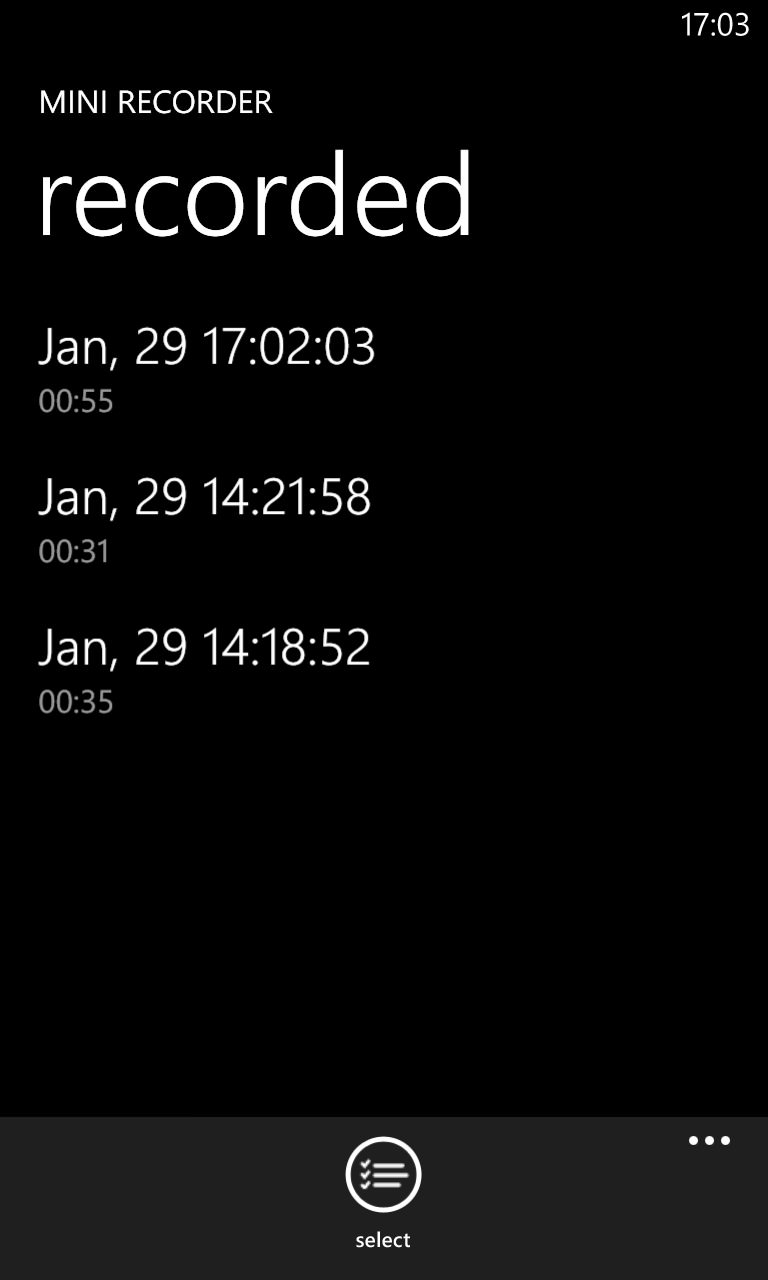 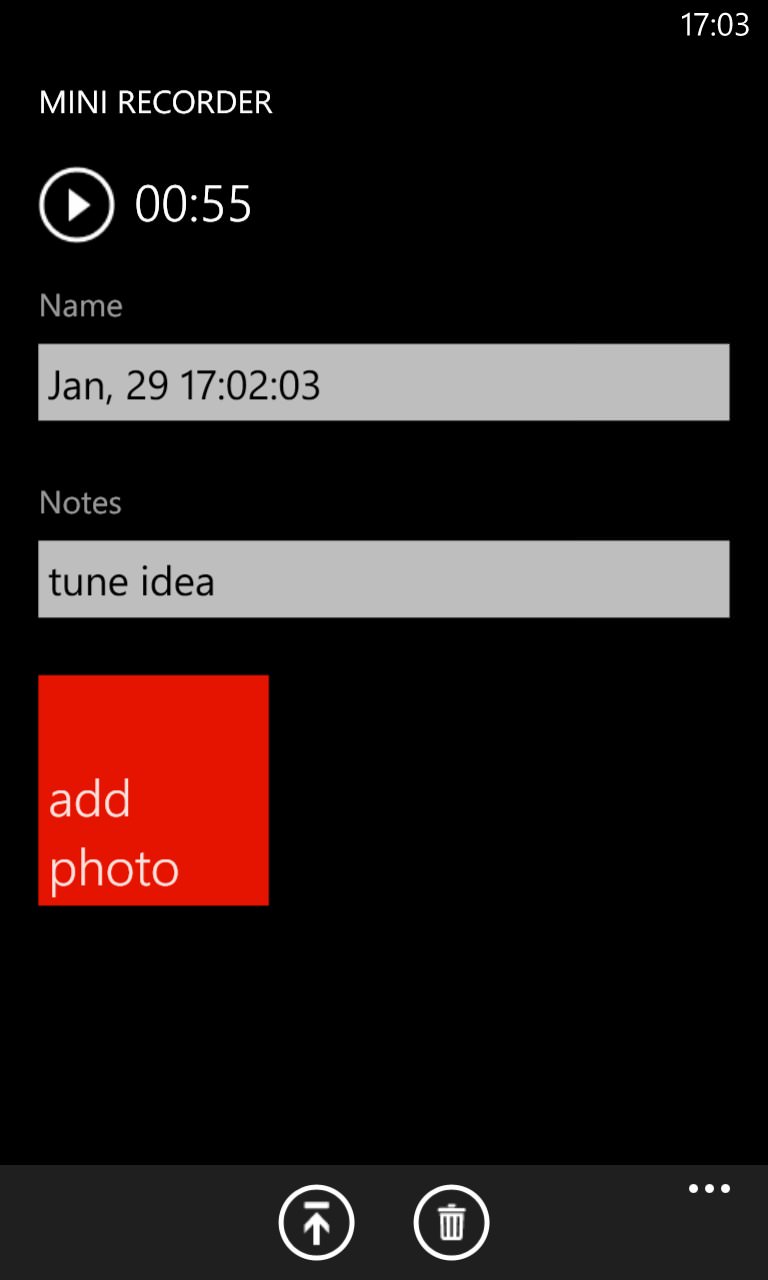 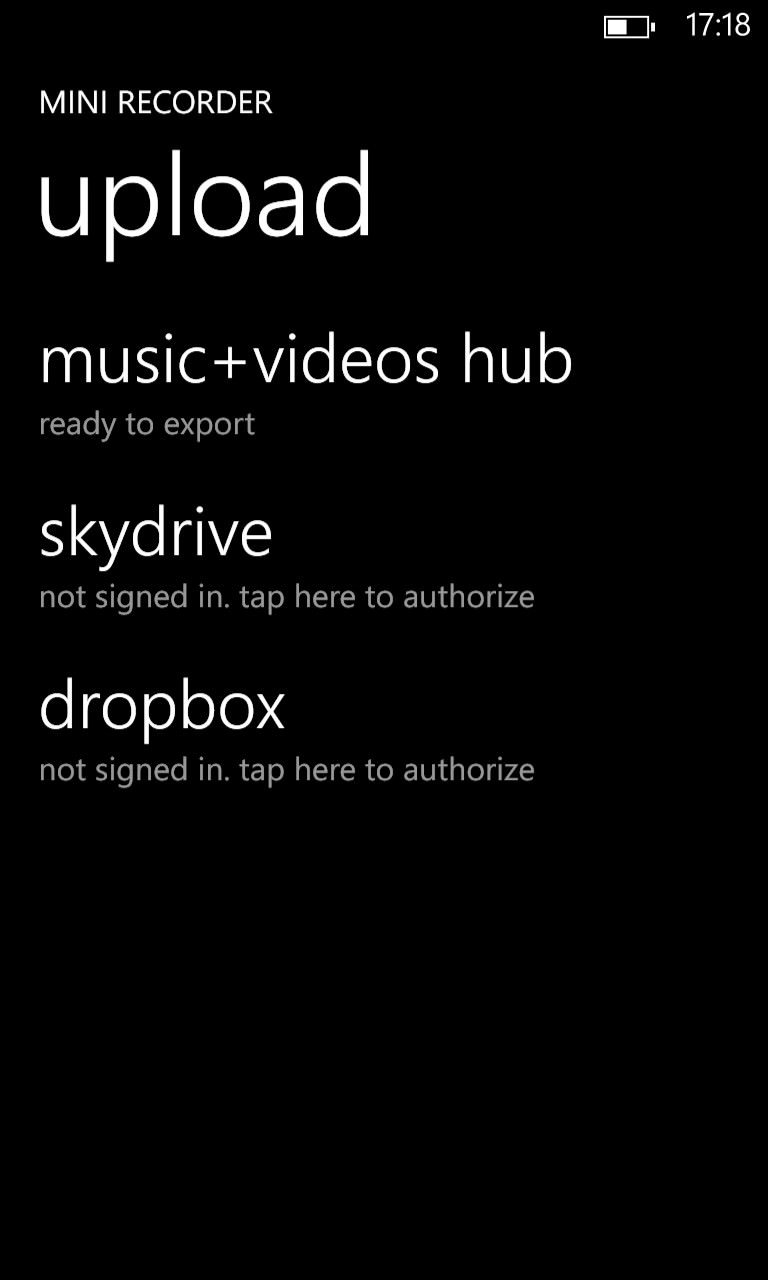 * In fact, interrupting recording (e.g. by pressing the Start key) merely pauses the recording, so you can resume it later and save at that time.

** Tap and hold works on the integral playback screen, but it's not proper 'scrubbing'.

Opening to a 'donations' screen seems a little keen, but hey, that's what shareware has done since the dawn of time, so...  A big microphone icon sits on top of gradually animating background (for no reason whatsoever, it seems). Recordings can be paused at any time and, later, even cropped, though I did encounter a few errors that seemed inconsistent with what I was doing - so there are some bugs here that need addressing.

Despite lacking cloud backup support, Pocket Recorder does seem quite ambitious. There's a 'scan' function that will take your recordings and just play the bits with a waveform, i.e. all silence is omitted - this could be rather useful in some situations. Plus there are 'video' tutorials built-in, slide shows and animation of how to use the application, with audio track.

Actual recorded quality is average again, though at least here headphones could be left inserted during recording. 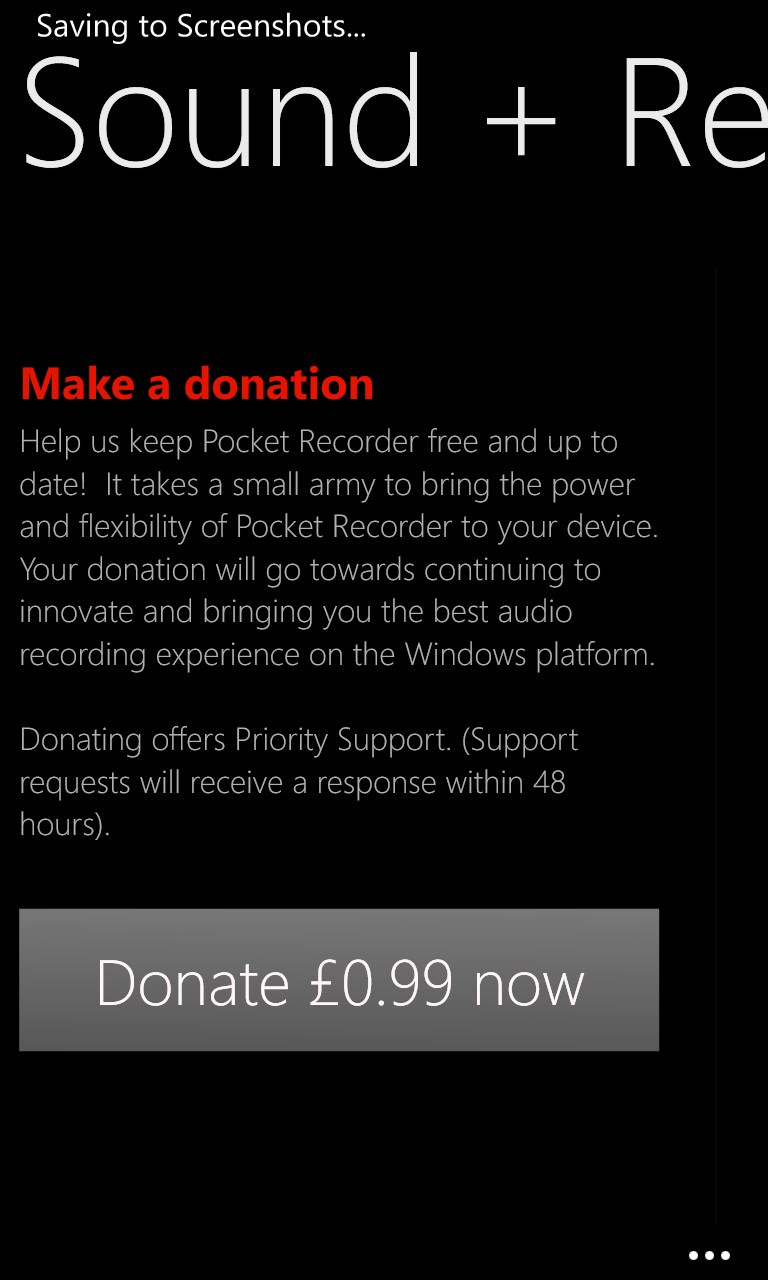 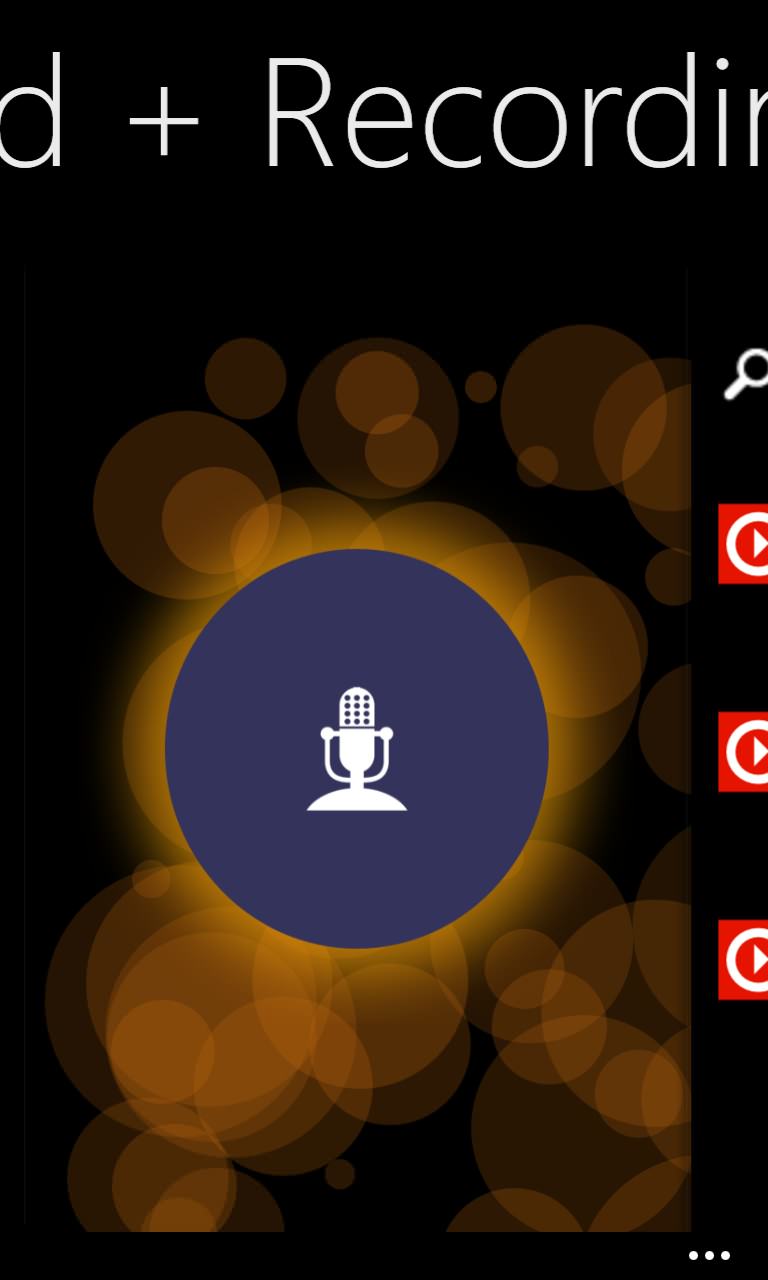 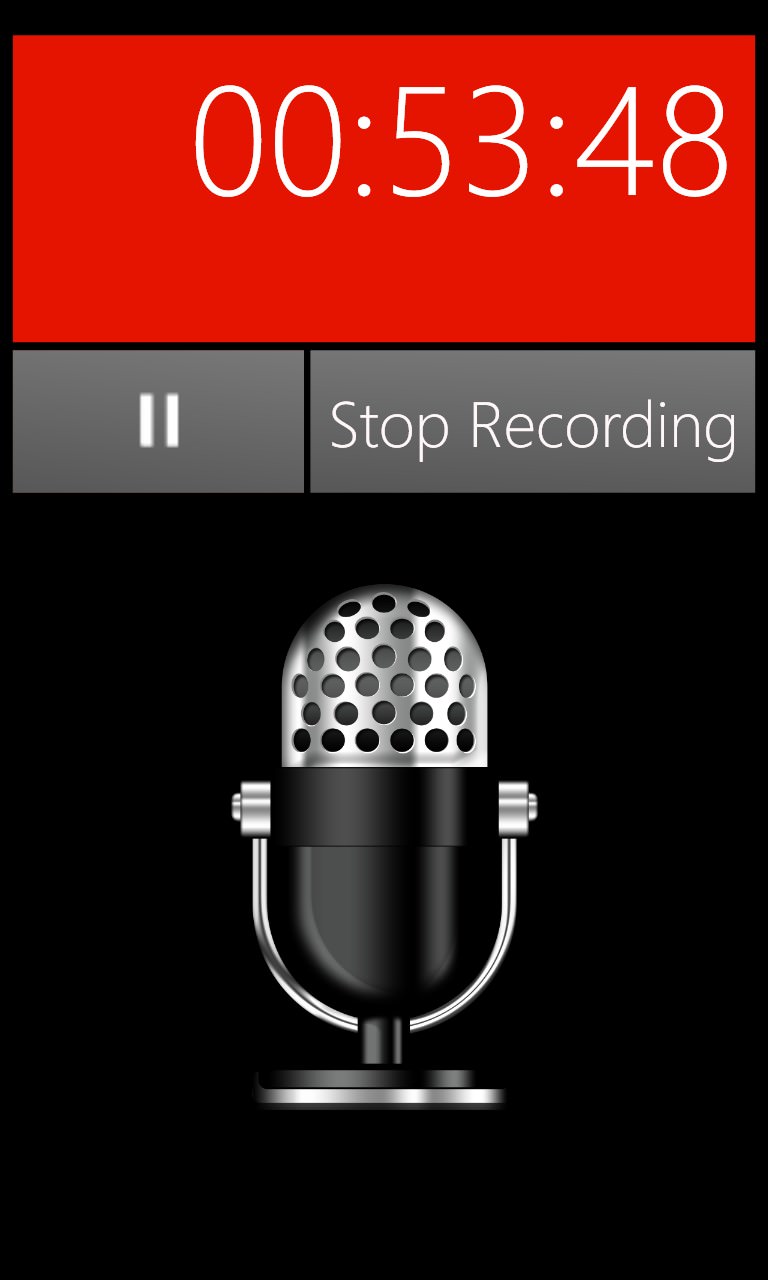 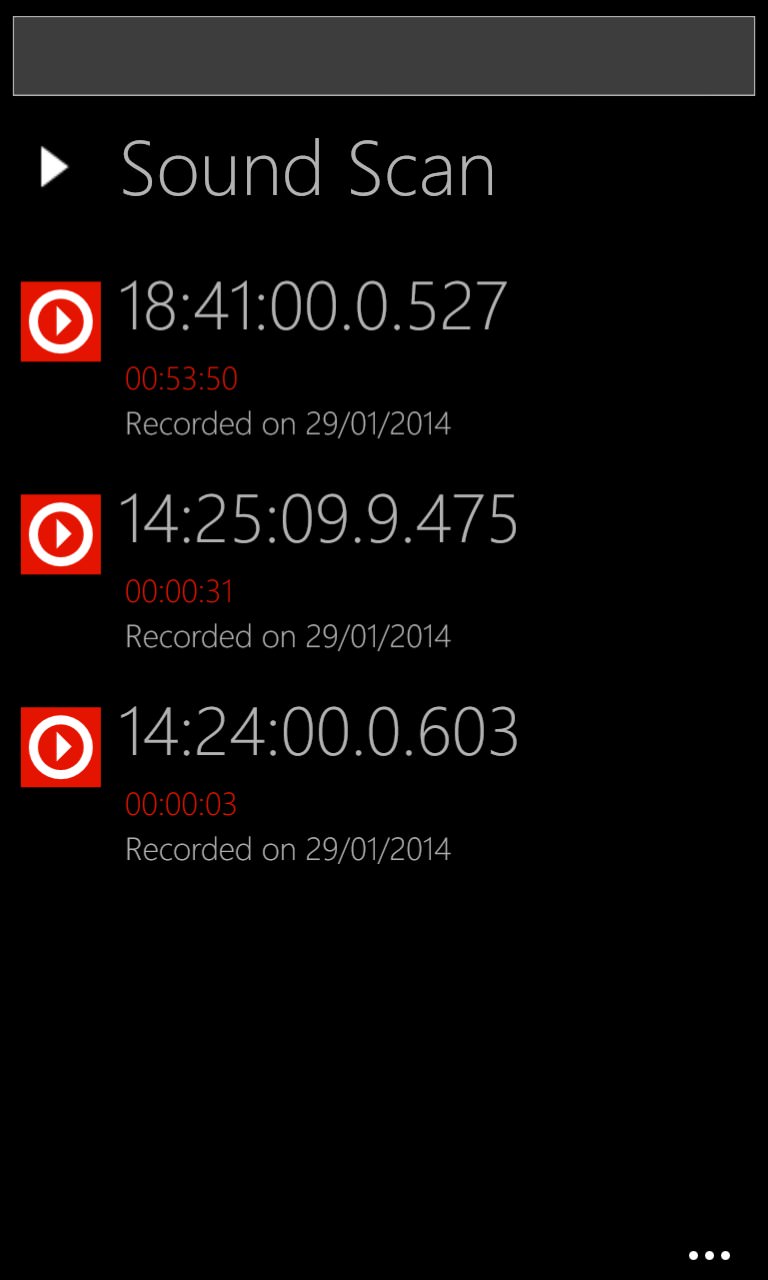 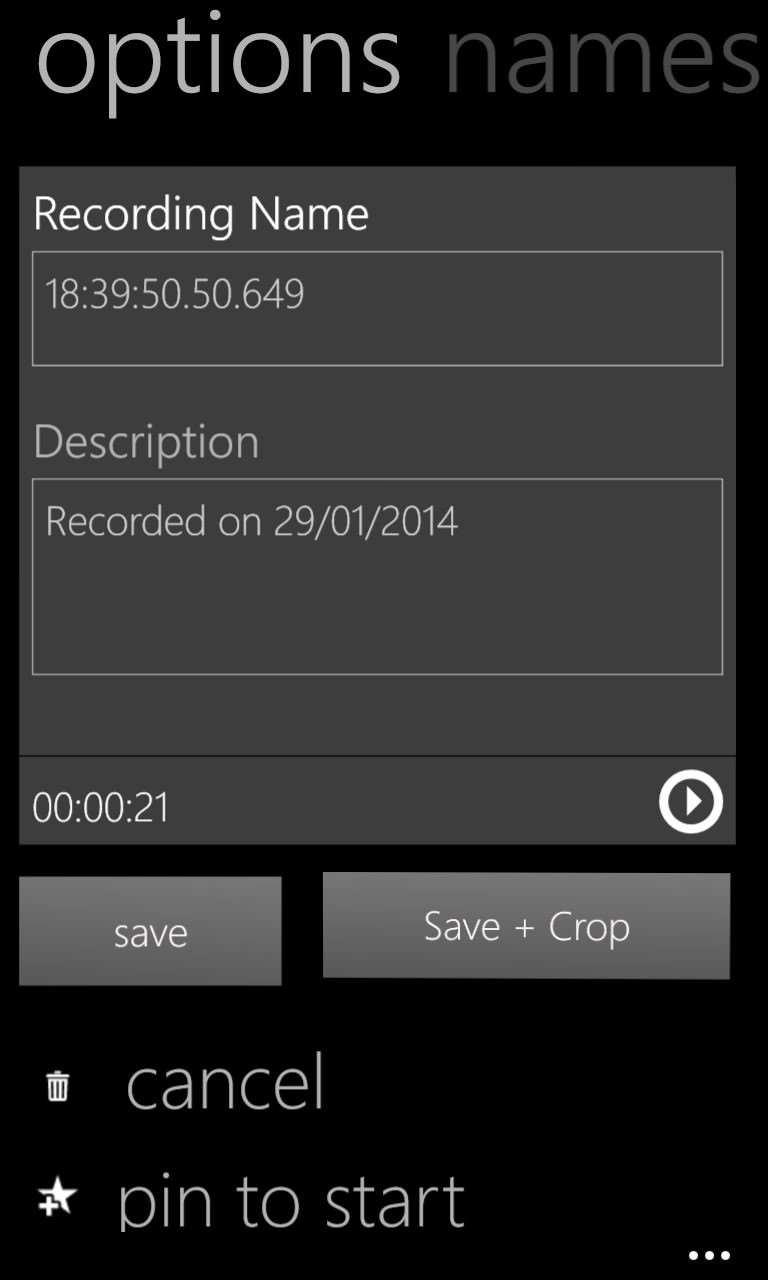 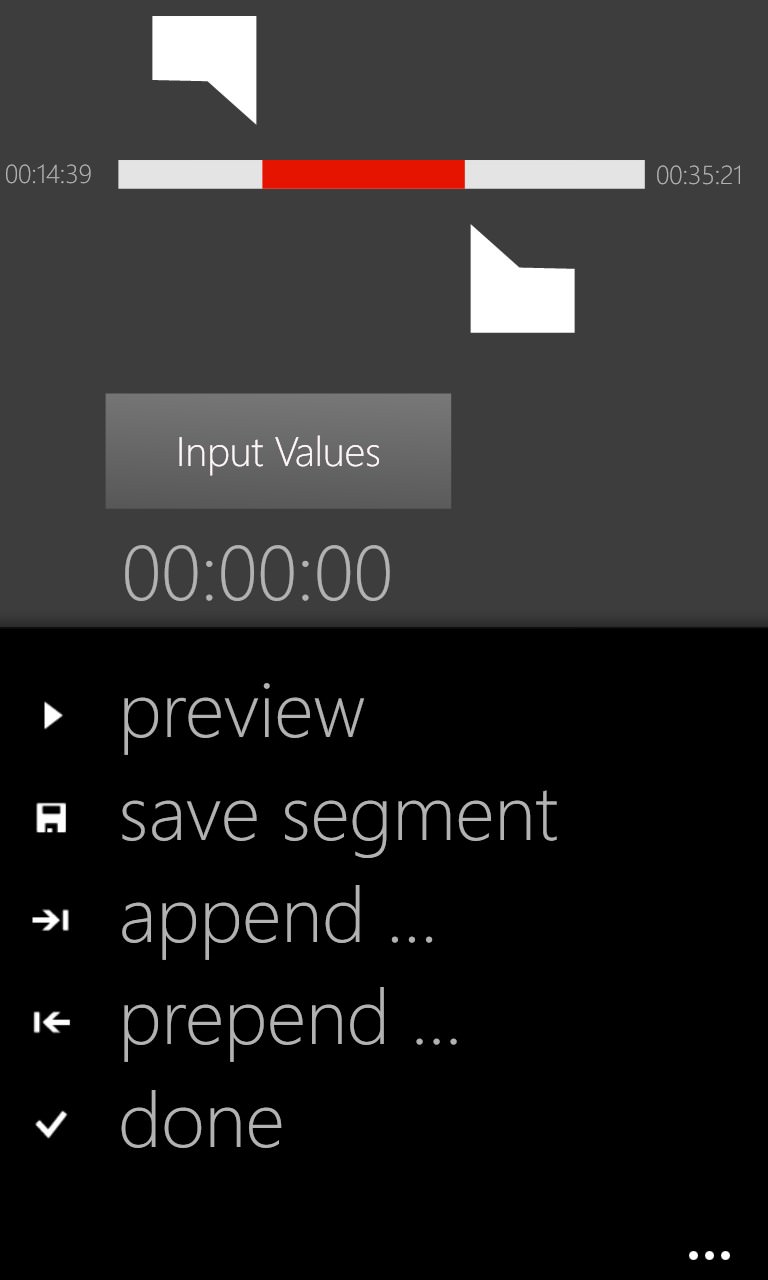 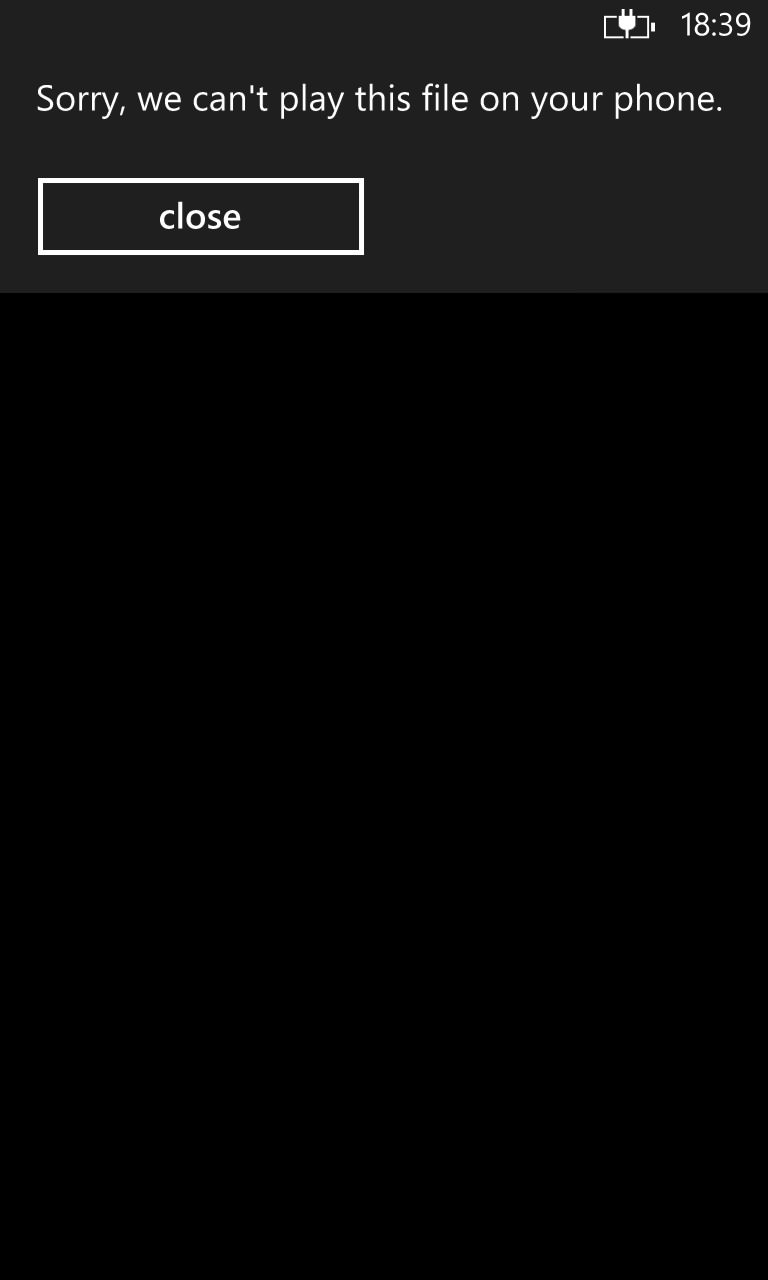 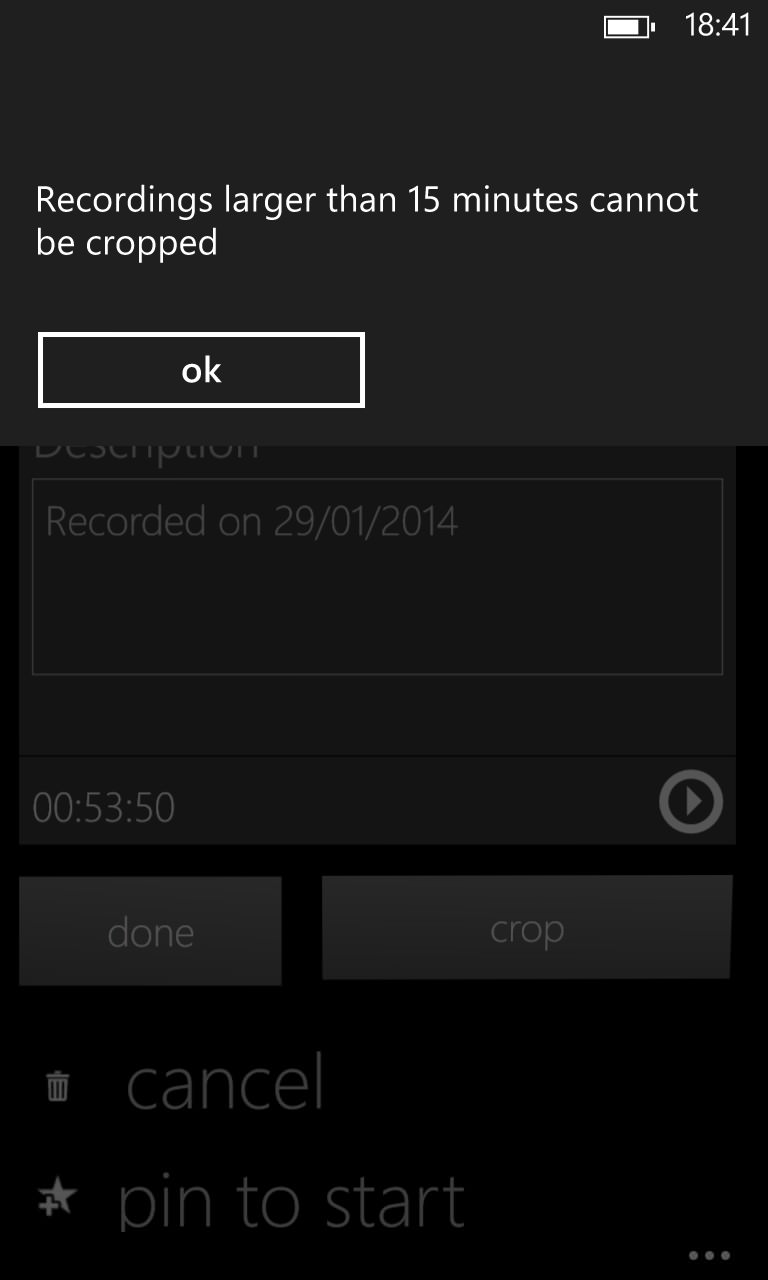 A mock theatre graphic introduces a big red record button, while 'peak' LEDs flash to show recording volume - which is all fine as it goes, but Recorder simply doesn't do the job. Recordings show speed changes and distortion throughout, all quite horrible. And, again, things get even worse if you try recording when headphones are plugged in.

The UI is otherwise fairly restrained, though the lack of auto-saving or auto-resuming recording is another concern. 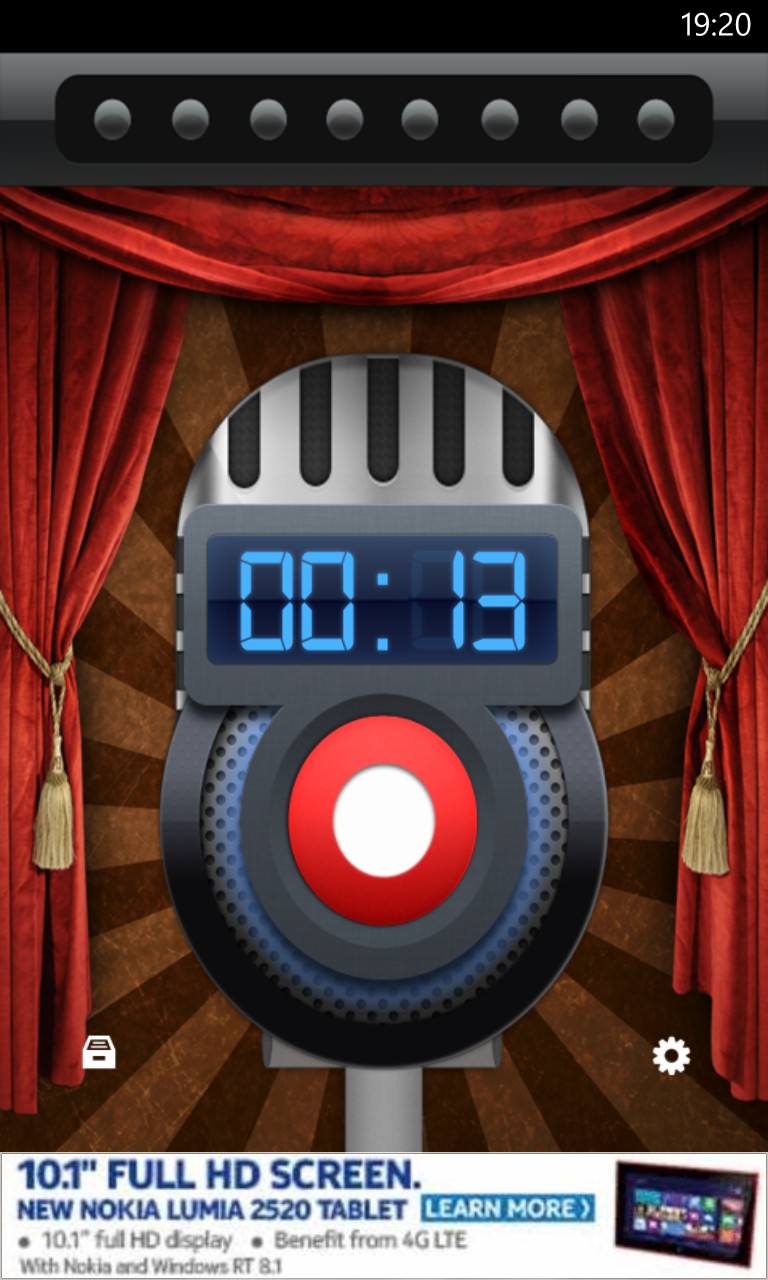 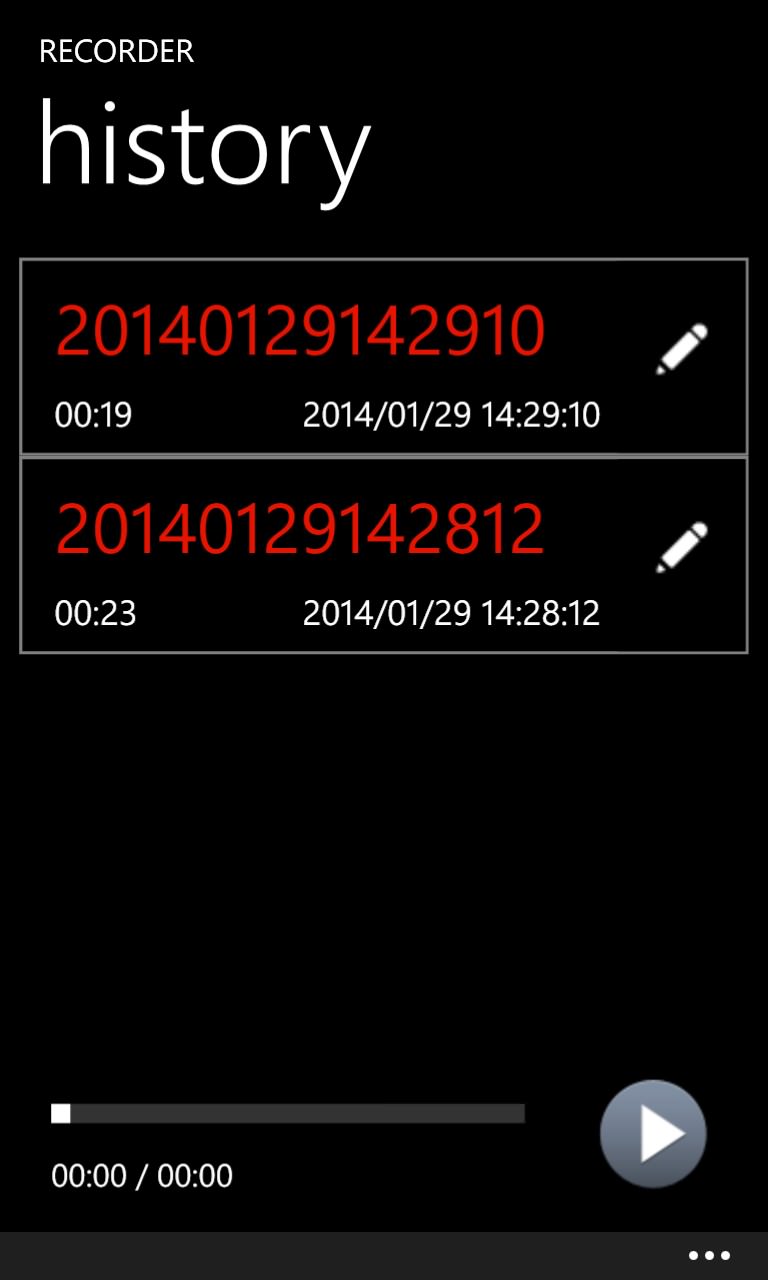 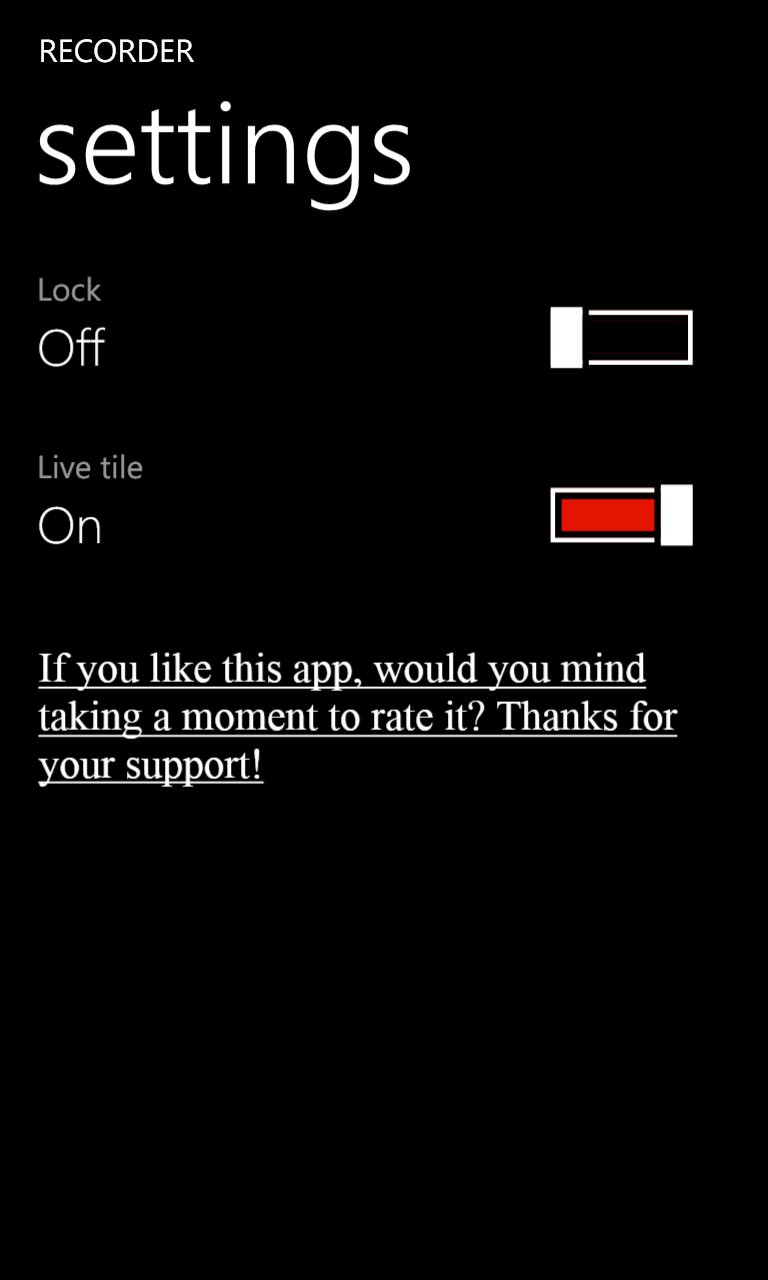 * By tapping and holding the appropriate fwd/rew(ind) controls

Remarkably, this sticks to the UI metaphor of a 1980's cassette tape recorder, right down to spinning reels, sound effects for the mechanical controls and appropriate labels and 'insert into recorder' menu options. It really is skeumorphism gone mad. Yes, it's novel and attractive, but you have to wonder how many people born since 1980 won't know what to do because they've never even seen a cassette recorder?

Recording quality was (16kHz) average again - and the lack of auto-save or resume means that it's tough to recommend this application for serious use. 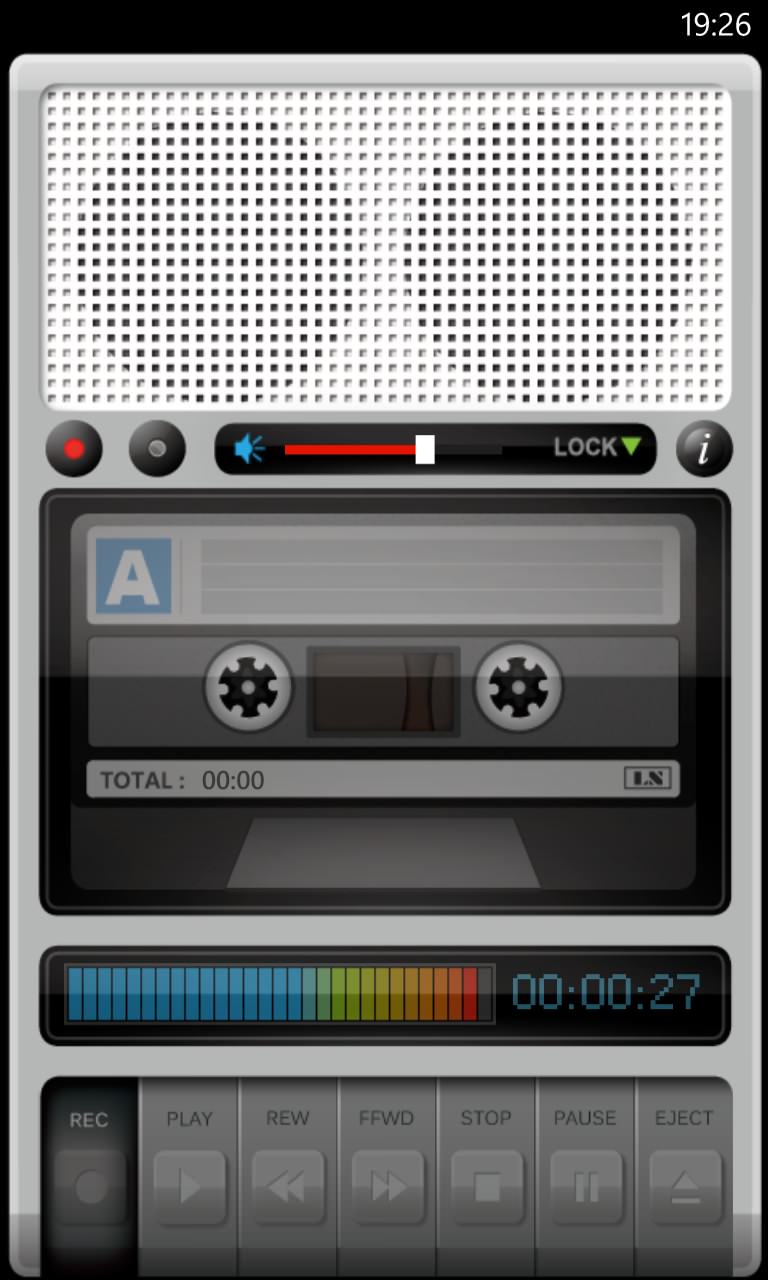 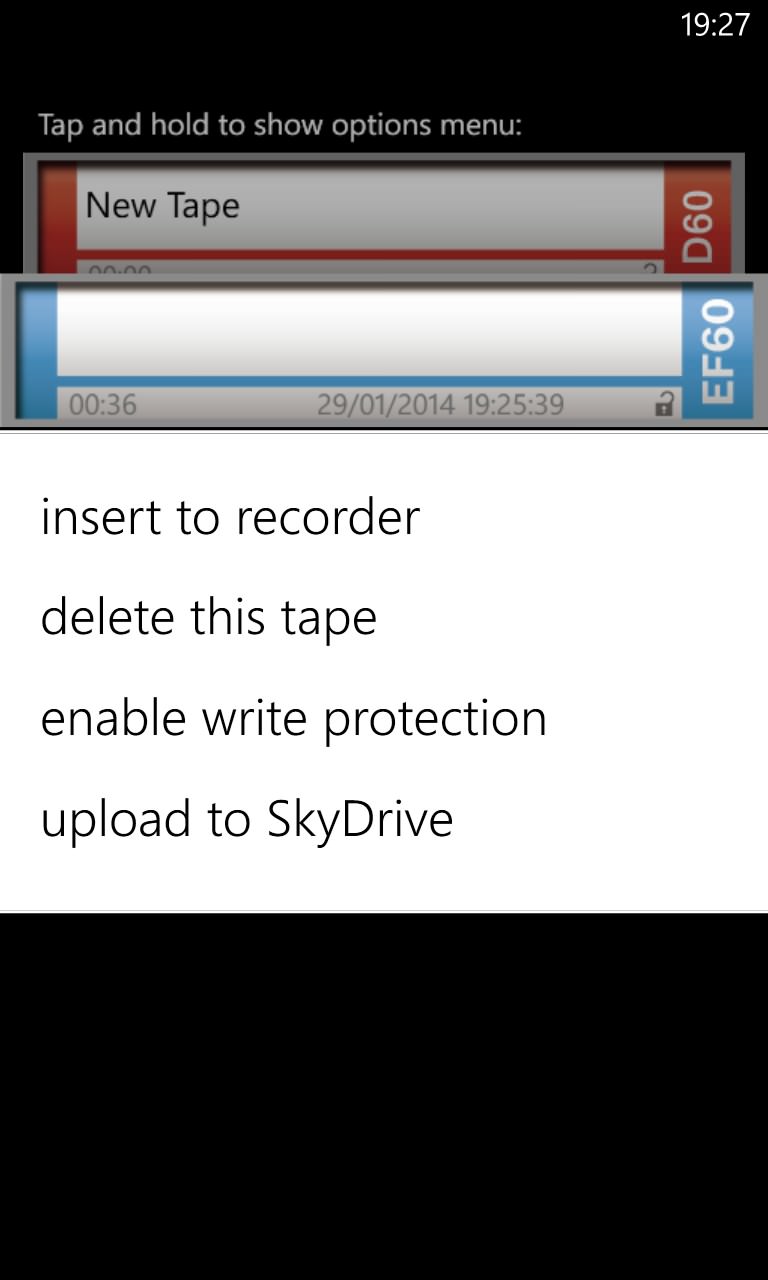 A minimalist UI, with banner ad support, recording quality was again average - at least this app is up front about the lack of professional quality audio sampling. Recording interruptions are handled deftly, with recording immediately resumed when the app is restarted.

Everything works, though there's minimal use made of standard Windows Phone UI components, witness the file/recording browser which is, unbelievably, a drop-down pick list rather than a scrolling list in the usual way.

Hard to recommend as a first choice utility in this company though. 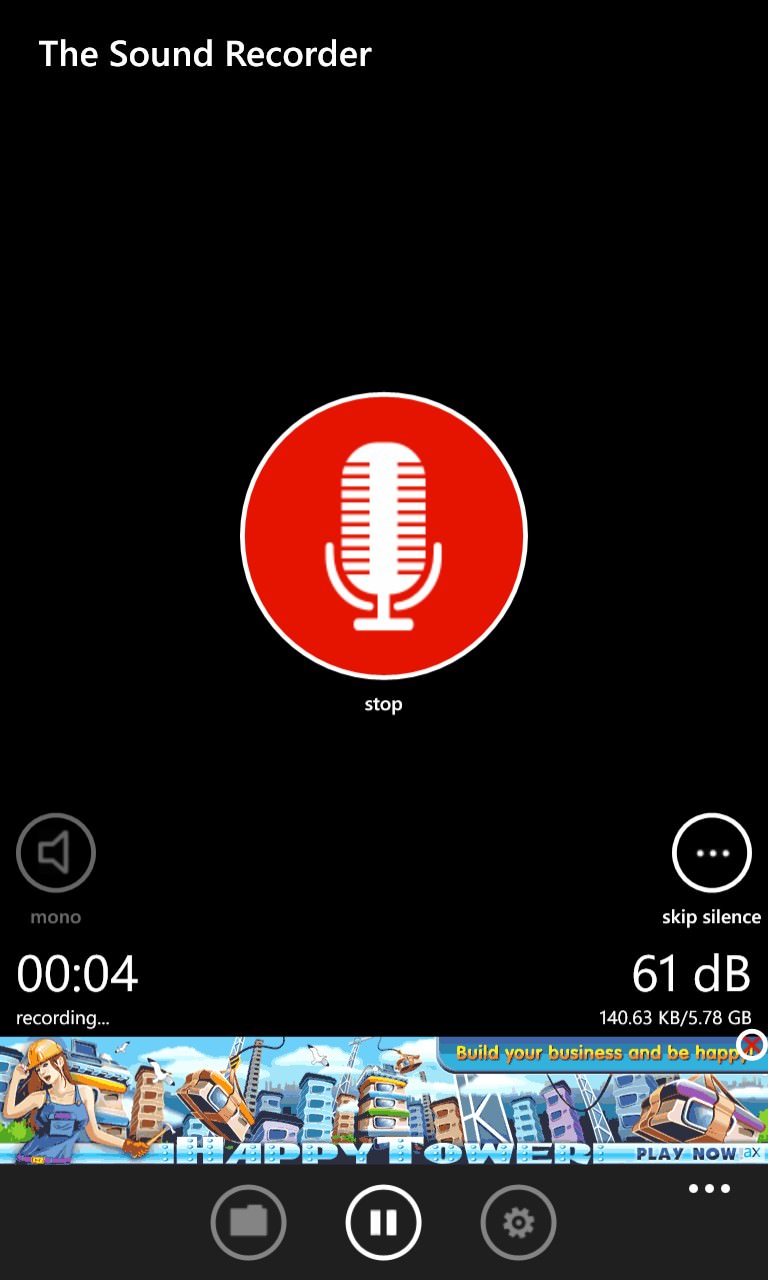 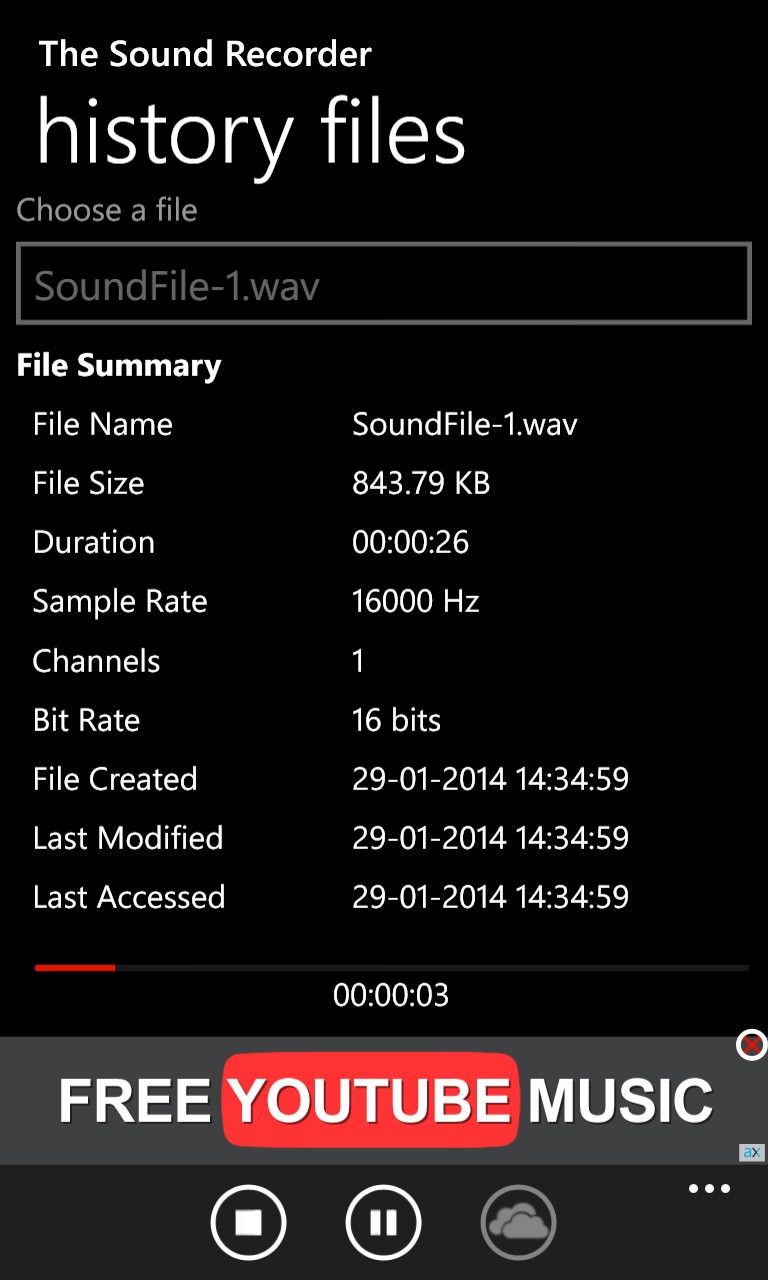 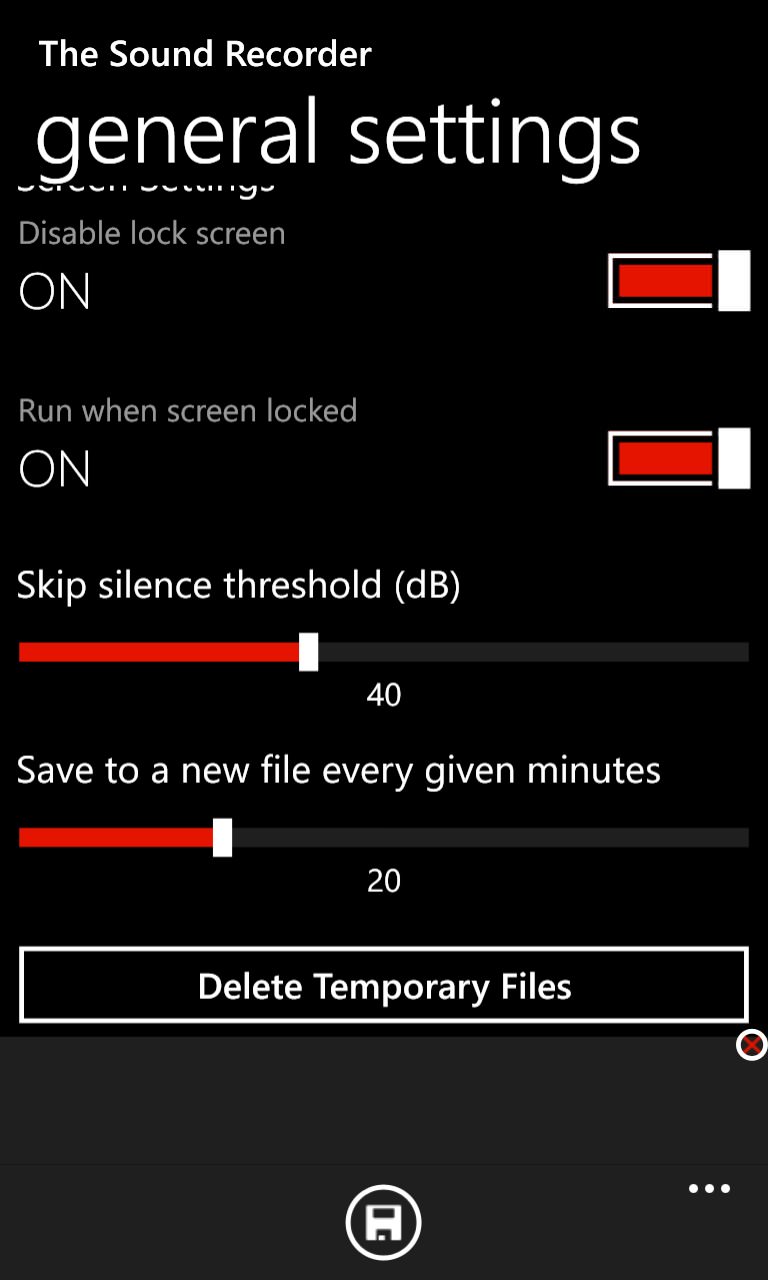 * using long press and hold on the playback controls

There's no doubting when ZeSoundRecorder is recording - the giant button pulses and animates in reassuring fashion.... until the standard Windows Phone screen timeout kicks in... and then your recording so far is lost. Worse, when you turn the screen back on, the application is corrupted and simply pops up an error when you try and record anything else.

In fact, you can't record anything else - period - until you've terminated ZeSoundRecorder or restarted the phone. Quite simply, a disaster of an application in the current version. Add in average sound quality again and there's nothing to see here. 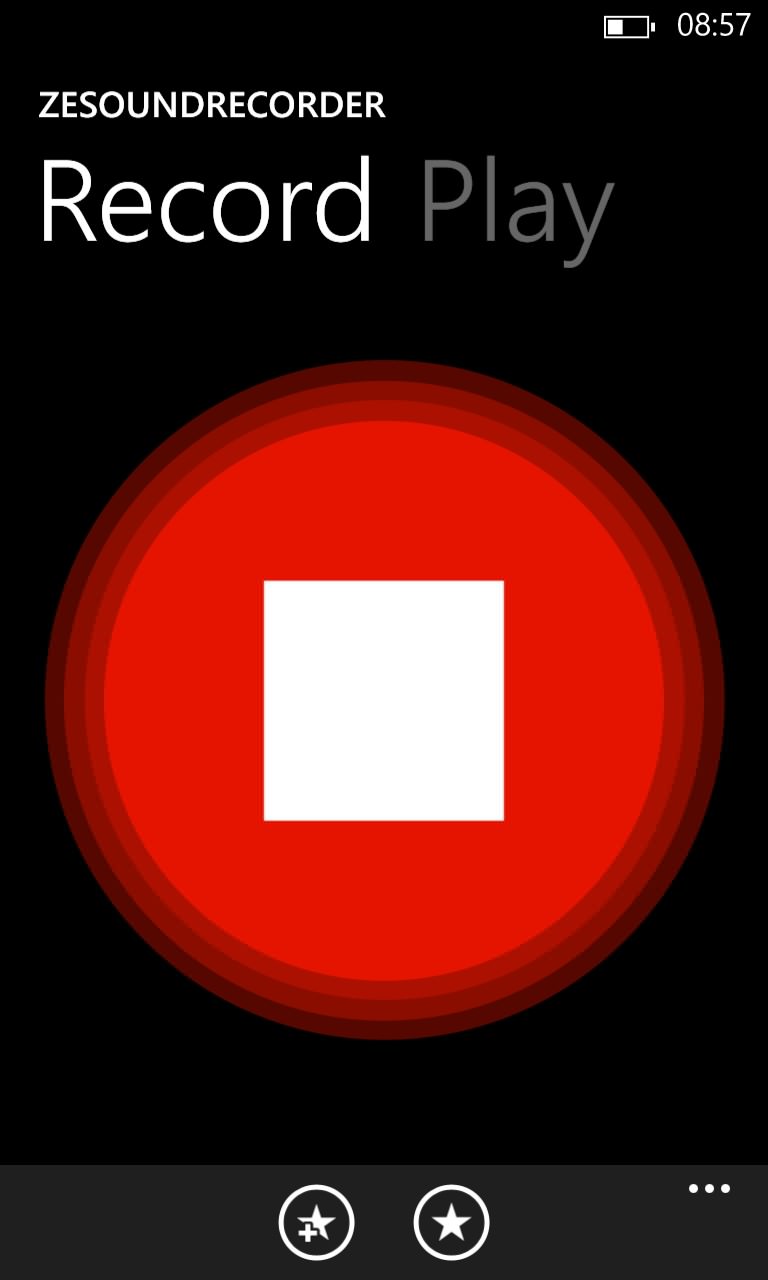 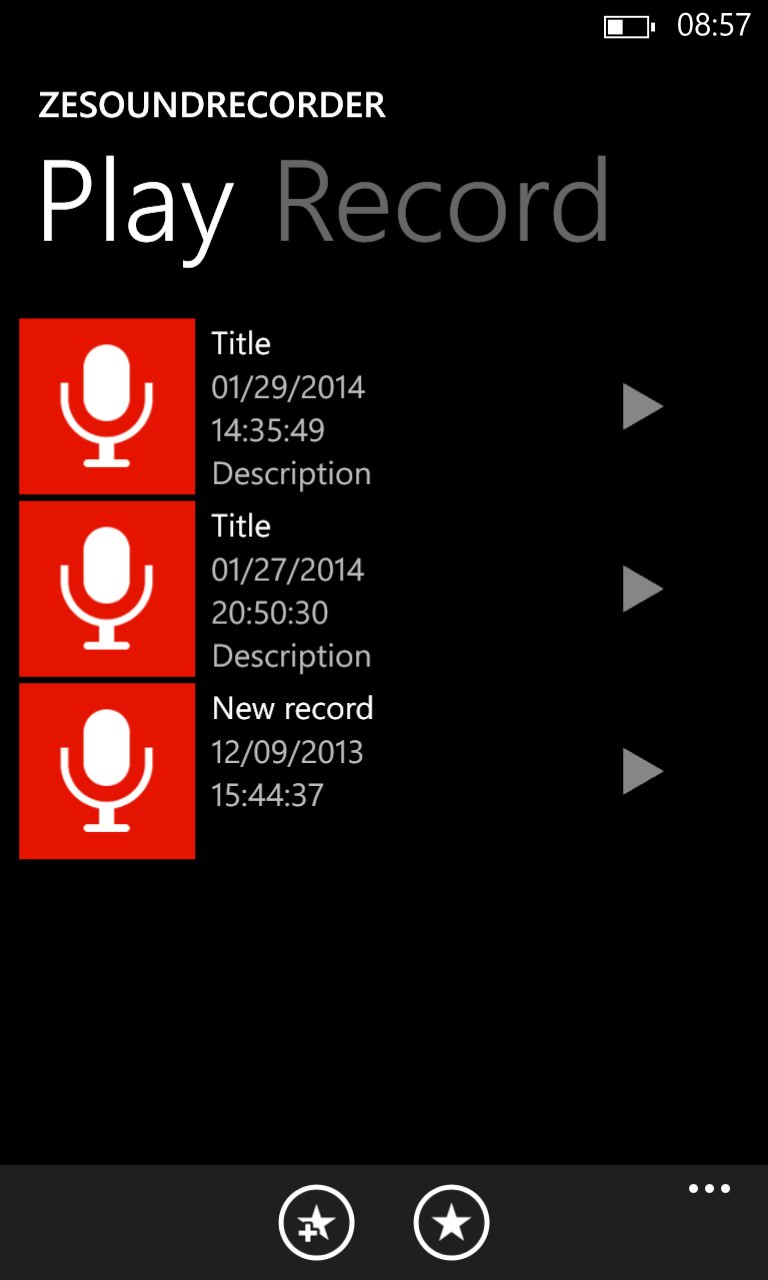 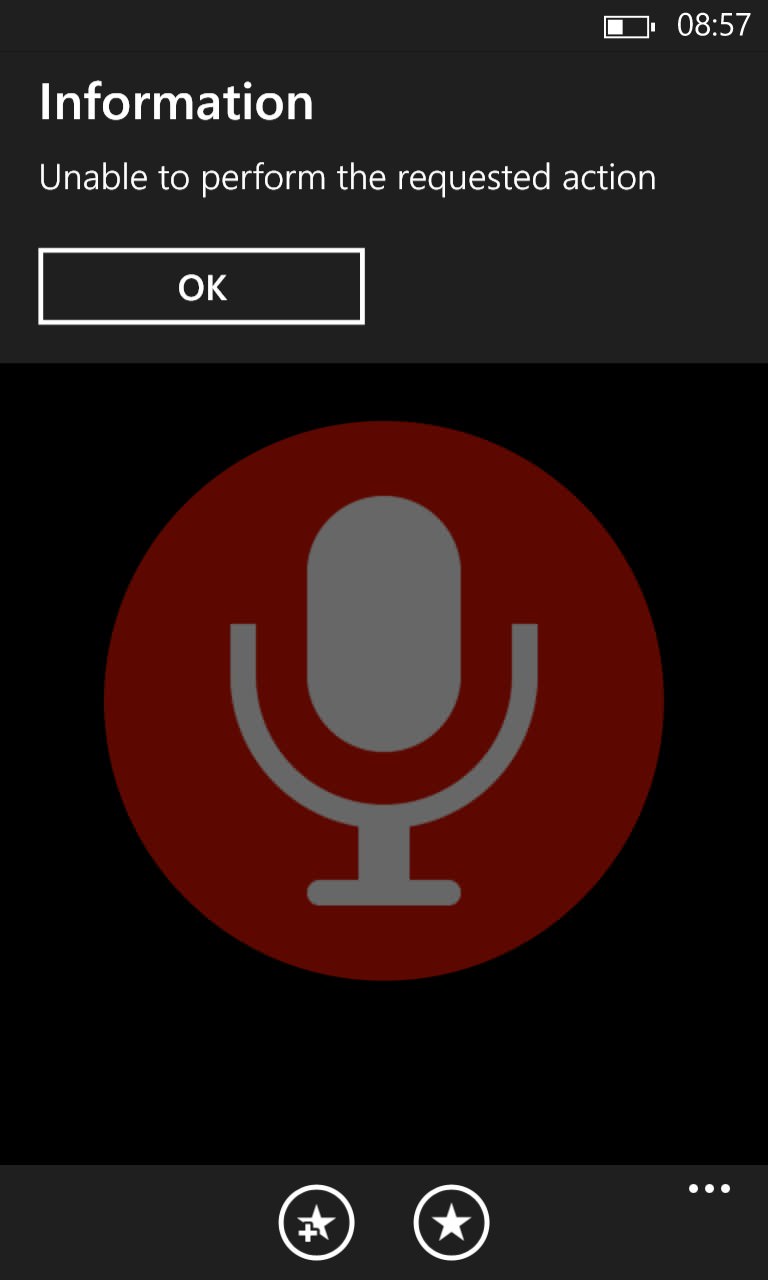 Although extra applications will doubtless get added to this round-up in time, there's no doubt as to the current Rolls Royce of the group - Audio Recorder Pro is the only one to go the extra mile in terms of accessing the highest quality audio direct from the (optionally) stereo microphones and their chips inside a top end Windows Phone. The difference is night and day, as you can hear here, first you'll hear typical 16kHz output from Mini Recorder, then some 44kHz capture from Audio Recorder Pro, and apologies in advance for the amateurish guitar playing(!):

It's true that there are some nice editing and UI touches throughout other applications here, but the quality difference is so vast that for anything other than plain speech you're best off sticking with Harald Meyer's (teq-IT's) application.

What about you? I recognise that this roundup is currently just seven applications from dozens in the Store - is there a gem I should be looking at and including in the next update to this application roundup?