This is both horribly controversial and also horribly subjective - and I know it's a popular meme to hate Microsoft's new 'tiles', especially on the desktop. But, regardless of their shape, the Windows Phone Start screen elements make me more efficient - I'm comparing it all to trying to live with Android, iOS, Symbian and Blackberry OS 10 - and Windows Phone is the one I keep coming back to with a sigh of satisfaction. And yes, that surprised me too...

I should make it clear that the shape of the Start screen components is irrelevant here - yes, I know Microsoft keeps making a big thing of them being square, and is matching the whole UI in the big Windows 8 transition that's currently causing controversy in desktop circles* - what's important is the density, flexibility and activity.

* for what it's worth, Windows 8's UI makes a lot of sense on tablets, but is a stretch too far on non-touch laptops - but that's just my tuppence worth....

You see, I've been bouncing around between half a dozen different smartphone UIs and so have had plenty of opportunity to get to grips with the pros and cons of each UI:

Against this background of UI whinges from yours truly, there is, I contend, the relative wonder that is a well configured Windows Phone 8 Start screen, modelled here by Rafe on his Lumia 1520: 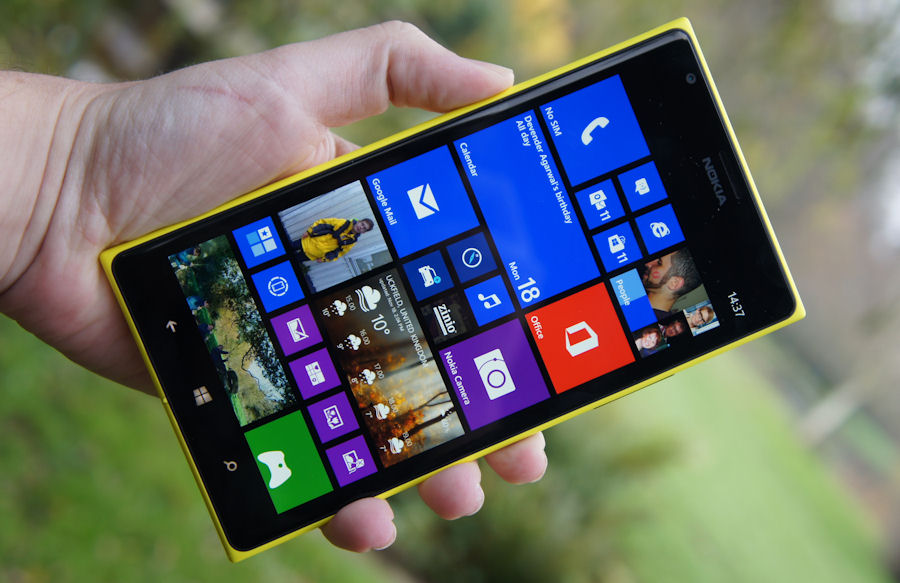 Again, don't fixate on the square nature of the elements. Add in imaginary rounded corners if you must - though don't get sued by Apple in the process! But the square interface does represent perfect efficiency in terms of layout. In Rafe's layout above there are 24 applications or widgets ('live tiles' in Microsoft parlance) and as you can see from the photo, Rafe wasn't even trying. In turns out, if you do the maths, that you can fit 60, repeat SIXTY, application shortcuts on a single Windows Phone Start screen without swiping at all. Add in another screen's full and you double that. In a real world layout like Rafe's above, add in about 1.5x extra screens full and you've got 60 or 70 items, some with large rich live tiles with active content, some with less and some just shortcuts.

The sheer possible density of shortcuts and information also gives rise to extra flexibility. Even more so than Android, every person's Start screen is likely to be totally different to every other's. And you can tweak positioning and tile sizes without having to remove them and re-add them (e.g. picking a different widget size à la Android). Plus I'd mention that the 'flipping' (animating) of live tiles means that they can shown two different sets of relevant information each, if programmed to do so - so in many cases you really do get two for the price of one (e.g. in weather forecasts, with today vs the rest of the week).

Finally, and possibly controversially, given the clamour for a notifications system in Windows Phone 8.1, there's the numeration of new 'things' on many live tiles. The original concept for the UI was that you could take in the status of your smartphone/life with a single glance ("Two new app updated, will look at them later, five new emails, will check them soon, no Twitter DMs, ooh, a new SMS, will just tap through to see that one" and so on. Plus the information delivered by the live tiles themselves, in terms of upcoming appointments, weather, stock prices, flight delays, etc.

(The 'recent apps' list on Windows Phone is - famously - limited to seven thumbnails - this is often quoted as limiting, though in view of what I complained at above with iOS and Android, being only able to go back seven apps does completely get round the 'swiping and swiping until you get to what you wanted' issue - either the app is there in the first couple of screen's worth or it's not there at all!)

In short, the single Start screen which often doesn't need swiping at all, the notifications which just appear and thus don't need to be swiped down and then swiped away, plus the sheer density of application shortcuts/information, all mean that - utterly to my amazement, as a long time 'Microsoft doesn't do good UI design' thinker - I'm more at home now on Windows Phone's Start screen than in any other smartphone OS front end.

Is it just me? Have I been drinking too much Redmond kool-aid? Or do you think I'm making valid points about Windows Phone's Start screen UI and that it's quite possibly underrated?