I've been tracking the standby battery drain from Windows Phone for the last six months, from version 8.0 of the OS through to the official Windows Phone 8.1 release with Lumia Cyan, here on my Lumia 1020. Now, being a scientist by trade, I'm appalled by the number of caveats involved in producing the chart below, but the result is still very clear - the official release of Windows Phone 8.1 is (by far) the most battery friendly one yet. [updated] 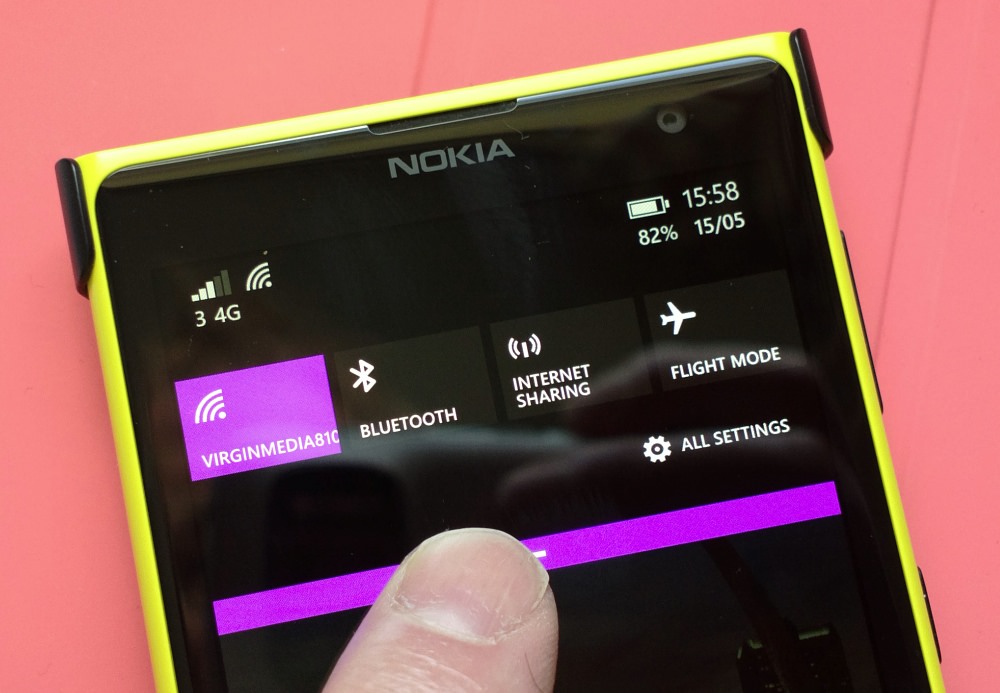 Core to a smartphone's battery efficiency is how much power is drained while the smartphone is doing 'nothing', i.e. the screen is (nominally - Glance aside) off, the speakers and camera inactive, and so on. Of course, the device is still connected to Wi-fi and to cellular networks, there are still periodic connections for data/message sync, so 'nothing' is a bit misleading. But we all know how dispiriting it can be to see a smartphone's battery gauge descending during the day even when we're not using it.

Hence my testing of the 'standby' drain here. I tried not to use the 1020 as much as possible, i.e. screen 'on' time was minimal. I looked at the reported battery status through the day and the results are in the chart below. Caveats you should note are:

These notwithstanding, a clear picture of under the hood optimisations by Microsoft emerges, in terms of battery efficiency in the final, official release of Windows Phone 8.1/Lumia Cyan: 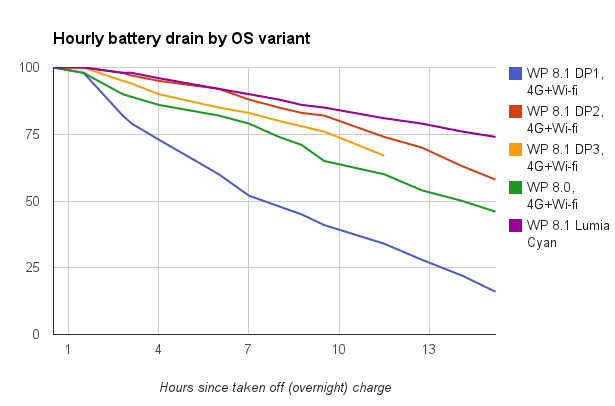 So - the most battery-efficient version of Windows Phone yet, by some margin - well done to all at Microsoft!

The difference between the first Developer Preview (of 8.1) and the final release is massive. As you can see from the blue (DP1) and magenta (Cyan) lines above. The former could drain a battery in a day on its own, with no actual use of the phone by the owner(!) - demonstrating yet again why flashing a bleeding edge developer build of an OS may well get you some extra gadgets and functions, but it won't be optimised for day to day use. Whereas the official 8.1/Cyan release is far better behaved and in line with other mobile OS - thankfully.

Interestingly, the results contradicted my initial impressions immediately after the Cyan update, but then there was a lot of restoration, installation and set-up to do, plus 'play time'. The results above are of a largely un-played with device, on day three with Cyan and with all apps/modules stable and in place. And I'm now much happier with 8.1, it's now truly fit for purpose.

Your comments welcome though - have you too seen an improvement in battery life with Lumia Cyan installed?

PS. by popular demand, I've also charted the Cyan data above against the plots for some other mobile OS, measured on whatever I had to hand: Galaxy Note II, Nokia 808 PureView and iPhone 4S. So absolutely not 'comparing apples with apples', but hey, it's of interest: 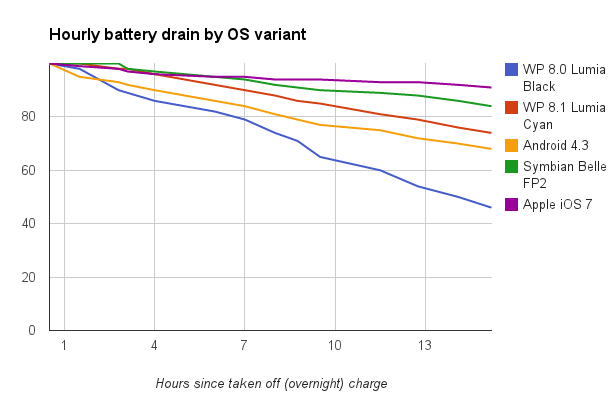