[Editor's note (Steve) - we also have another Lumia 735, on which I'm basing my more formal review, which will be up on Monday and which will include proper camera samples and analysis...]

One of the most stunning things for me about the Lumia 735 was that first moment out of the box. In my hand it felt like the Lumia 800 - the phone that started it all for me (on Windows Phone), and a device that I used as my main phone for eighteen months. The Lumia 735 has the same blown cushion styling, the curved glass blending into the polycarbonate chassis, and sits comfortably in the hand with the curved edges of the rear conforming nicely to my hand. Heck it even spins around on a flat surface on the base in the same way! 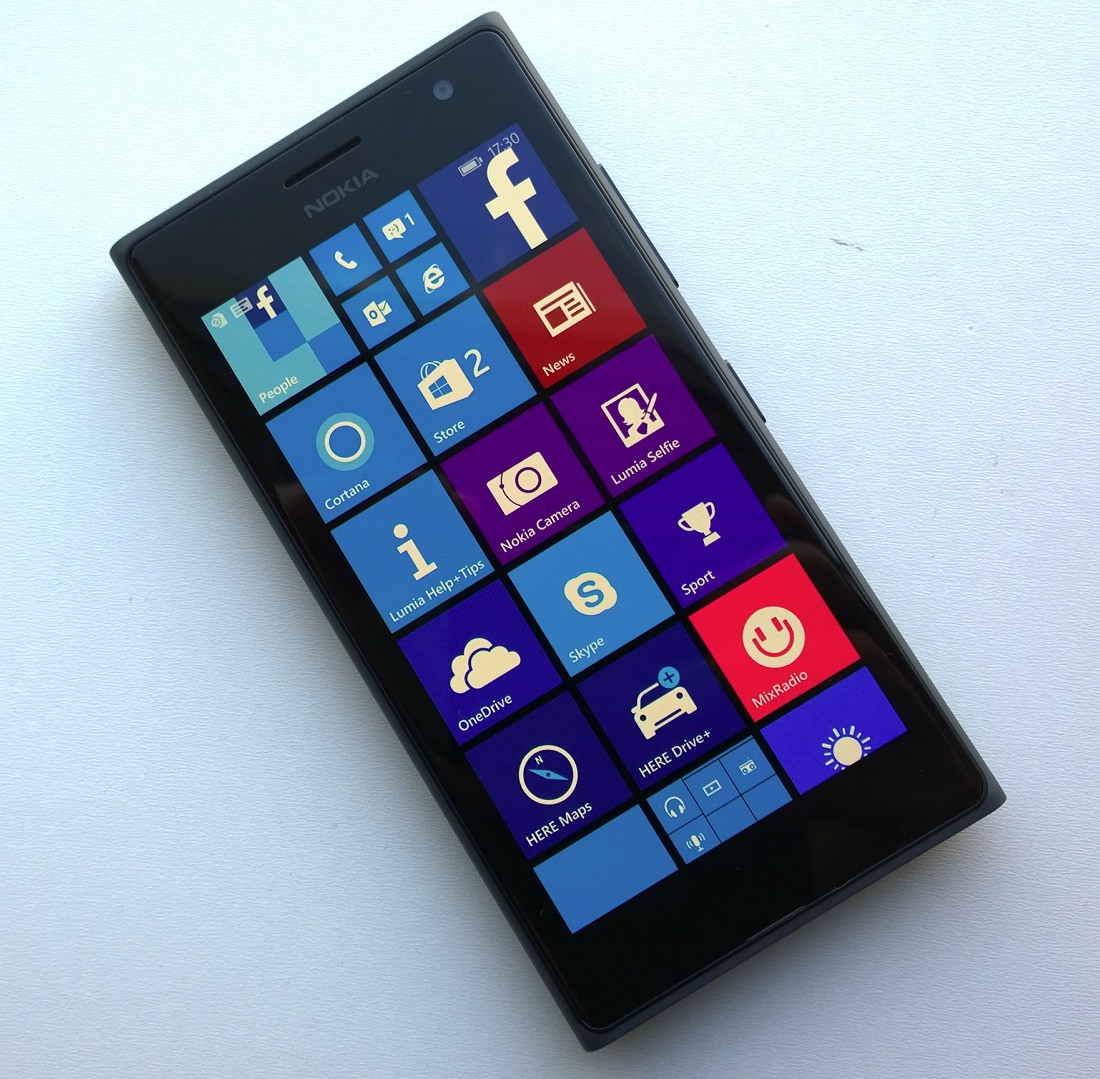 Of course, the 735 is slightly bigger than the 800 (except in thickness). At 134.7 mm x 68.5 mm x 8.9 mm, it measures up nicely to other new handsets such as the iPhone 6 (the 735 is slightly wider and shorter). The 134g of weight is a little on the heavier side, but only by a few grams. I suspect the extra packing required to make a user-replaceable battery work will have had the biggest impact on the weight, followed by the Qi wireless charging mechanism. I think that's a trade I would be happy to make.

Unlike the Lumia 800, the back of the Lumia 735 is removable (and interchangeable so you can buy alternate colours if you fancy a switch), as is the battery. Taking the back cover off gives you access to the microSD card slot, and the nano SIM holder. If you are upgrading to this phone, you're going to need to get your network to send you a nano SIM, or you need to find someone with a Nano SIM cutter and accept that it's going to be rather a snug fit for your chopped card. 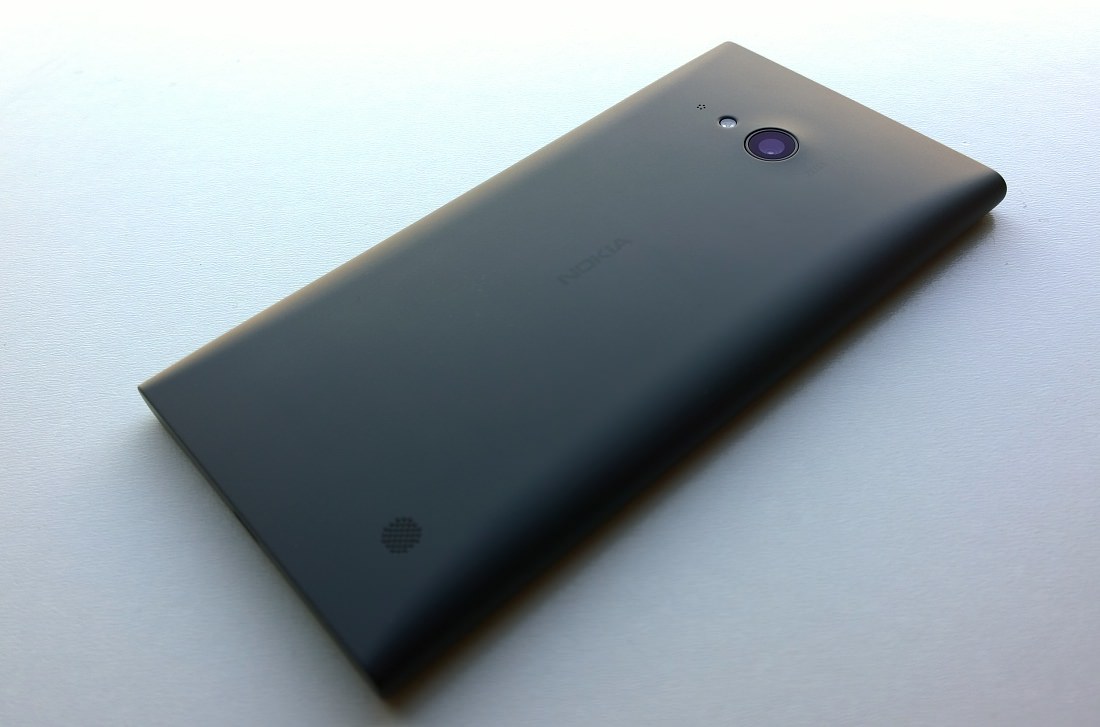 In terms of positioning, the former Nokia team now at Microsoft has placed the 735 squarely into the mid-range, and will be promoting this heavily as the 'selfie' camera phone. That's reflected in the hardware and the marketing. Surprisingly, after the Berlin IFA reveal of most handsets for the Christmas market, the 735 is the only handset to stake such a claim for selfies. Given the strong love for Windows Phone in European pay as you go markets (and a rising tide of WP handsets in school playgrounds), this might be one of the smartest niche marketing plays yet seen from Redmond.

It's backed up by the five megapixel HD camera on the front of the unit, with a wide-angle f/2.4 lens. Microsoft is pushing the resolution of this camera heavily, and rightly so. In terms of photo size that is captured, the Lumia 735 takes a much larger picture (in 16:9 ratio, not just 4:3 of the competition) and the resulting pictures are more than suitable for social media and lots of sharing of the original image.

It's not as high quality as an image taken by one of the PureView handsets, but Microsoft is right to label this as one of the best forward facing cameras in the current smartphone market. 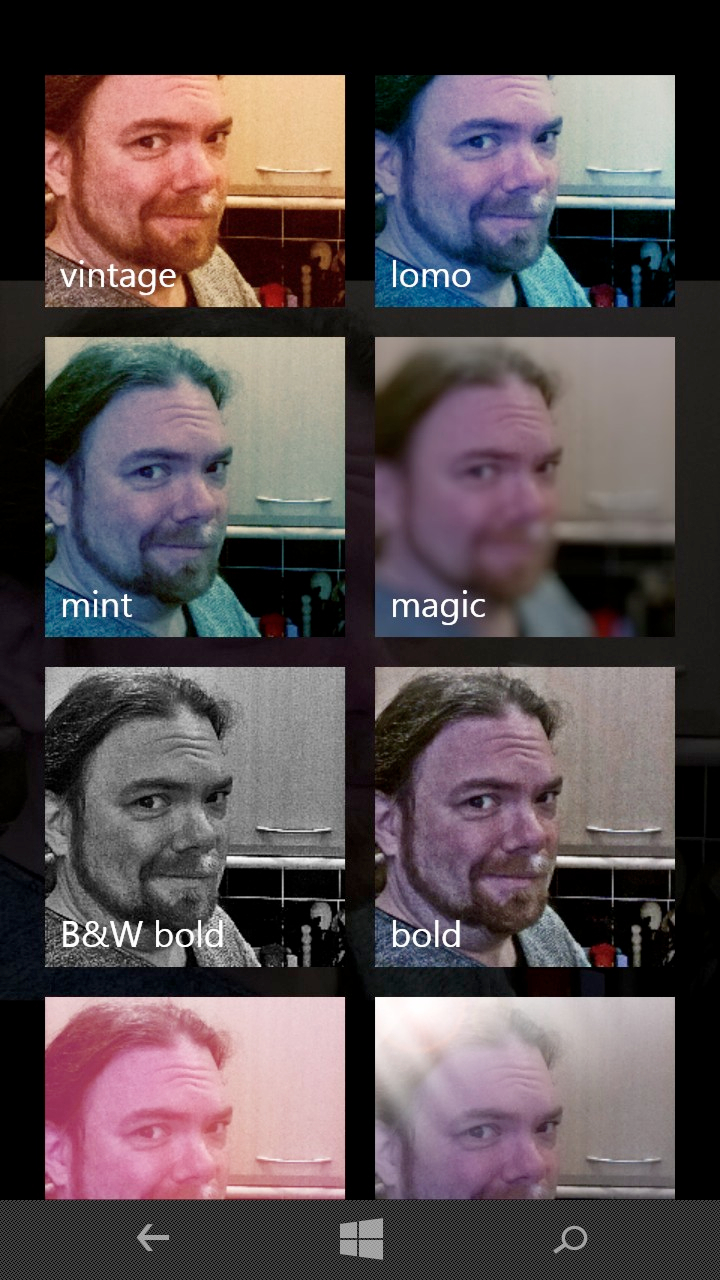 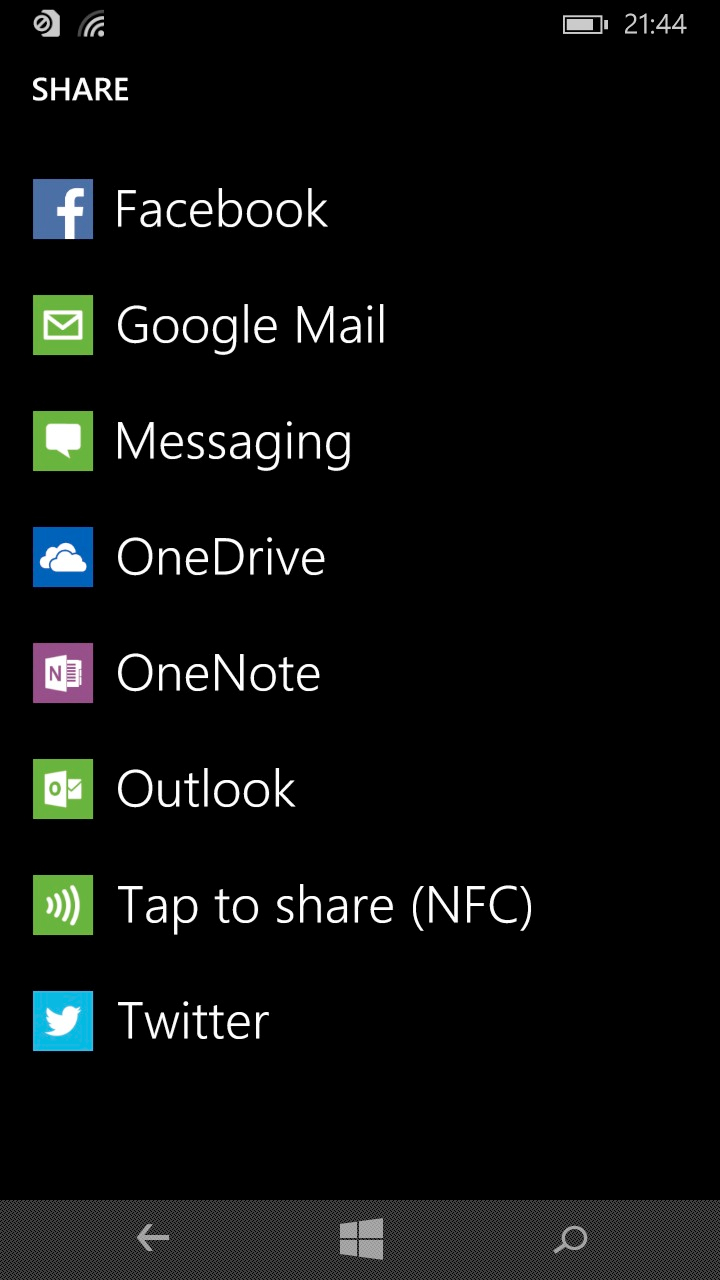 Prominent on the live tiles available out of the box is the Lumia Selfie app. This is an update to Nokia's Glam Me, which has featured on other handsets, but it's given a much more prominent place in the 735.

The interface is distinct from the main camera application, with a large camera shutter button at the bottom of the screen, and four icons along the top. These take you to your photo gallery, switch between the two cameras, (between the forward facing selfie, and the main camera), toggle the flash mode, and activate auto-selfie when using the rear camera - which is less of a gimmick than you might expect.

With no physical camera button, you could hover your finger over the soft key on the screen, or you could switch on auto-selfie. This uses facial recognition to know when a face is in the middle of the shot, and a series of rapid tones will let you know the app is 'locked on' and will take a picture a few moments after the tone starts. It's a nice touch, and even in a dark environment can pick out my facial features.

After taking the picture, it's not automatically saved (which is an interesting design choice). The app offers you the opportunity to crop the picture (square, landscape, or portrait), and apply one of a number of built-in filters (which purists will likely hate, but are still all the rage). Finally, you have the option to share the snap to your favoured network using the standard Windows Phone share pick list (or save the image and upload the image later).

The selfie app doesn't break any new ground, but it does provide a fast-moving environment to take some great pictures without adding too much complexity (you have the full-blown camera app for that). It highlights the promoted feature of the handset well, and the work that Nokia put in to Glam Me before it was all handed over shines through.

We'll have a more detailed look at the camera(s) in our formal review here on All About Windows Phone.

The Lumia 735 runs Windows 8.1 with Lumia Denim. The update is something we've talked about before here on All About Windows Phone, and the 735 is the first handset on the high street to come with it all loaded up.

First impressions are that it's a lot... busier. Yes, it provides access to a lot more options, and it delivers what consumers think 'smartphones' should be doing in 2014, but the overall feel from a long-time Windows Phone user is that Microsoft has reacted to outside influences, rather than trust its own ideas.

Android's impact is noticeable. The clean lines and focus on (large, clear) typography that made Windows Phone 7 stand out, and were mostly retained in Windows Phone 8, have been superseded by reducing text size to ensure all the information is displayed on the screen. This makes the UI far more accessible and easier to switch to, and the pragmatic part of me agrees that this is the right thing to do. But it means the Lumia 735 feels a little bit more generic than previous Windows Phone handsets.

The notifications bar, which you pull down from the top of the screen in a similar way to Android, brings quick actions and a history of your notifications to Windows Phone. The quick actions can be changed from the Settings app (which is a sprawling list of choices now, and rather daunting for a newcomer), and you can decide which apps will show up in the notifications. The settings and filters are clearer than those on Android and iOS, although with two different font sizes there is a feeling that too much is being crammed in at the top of the screen. 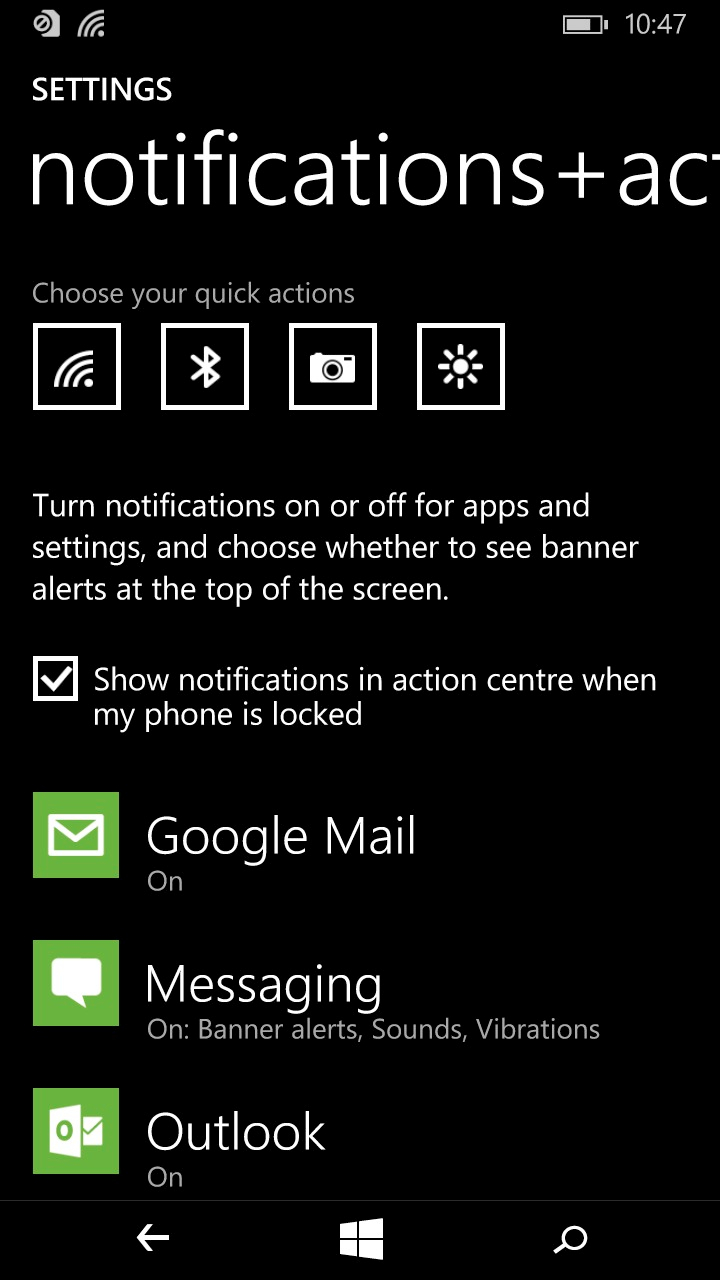 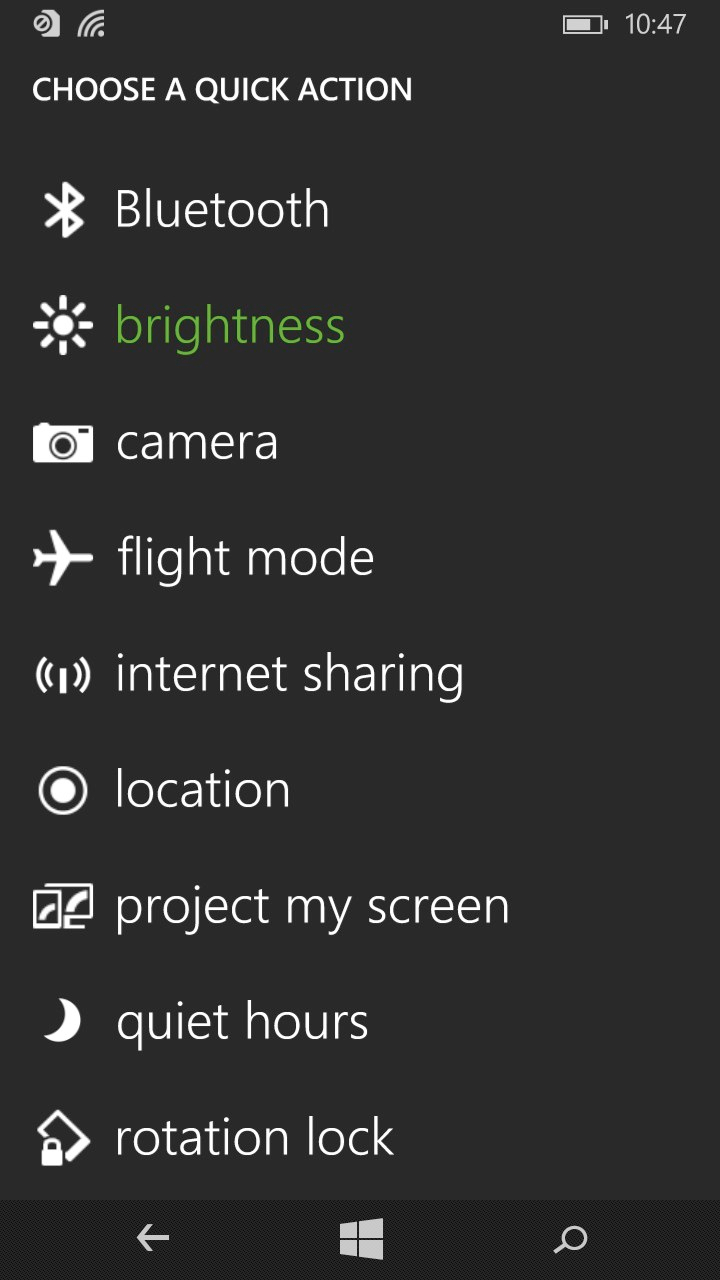 The other major point is Cortana - with the UK and India joining the US in using the digital assistant (in beta). Matching the functionality of Siri and Google Voice, the Halo-inspired natural language interface allows you to manage the majority of your PIM features, control a number of applications, and trigger searches on Bing.

It's a great feature to show off the handset, and in certain circumstances (driving being one of them), but like Siri and Google Voice, it's a secondary feature, and not something I would say is a deal breaker in deciding which handset to buy.

The other area that was a surprise was the addition of 'word flow' to the keyboard. In my opinion, Windows Phone already had one of the most accurate keyboards over all the smartphone platforms, and that functionality hasn't been taken away. The addition of word flow, which lets you trace a line between the letters of a word, has improved the speed of the keyboard. I like that you don't need to toggle between tap and word flow, you just decide on the fly and the keyboard will know what you want to do.

The main point of my first day or two with the Lumia 735 is that I want to keep using and exploring it. That's never a bad thing. The physical design is comfortable to use, although the lack of a camera shutter button seems to be a strange choice given the PR focus on the selfie capability. Software wise, the additions to Windows Phone will give the handset a shallower learning curve. The UI is snappy, and I never saw any slow down or stutter while using the built-in apps.

The Lumia 735 is a good mid-range device, with enough unique features that it could put up a respectable showing in a head-to-head with Android and iOS devices. The obvious Windows Phone weaknesses in the UI have been addressed, although the third-party app questions remain. Hardware-wise it's tough to fault the handset, given the price (from £199 in the UK, off contract - Ed).

The question now is whether Microsoft can get this into the stores and get customers to buy the handset. The design team has certainly given it the best possible opportunities.