Caveat alert: Breaking down the Windows Phone installed base by device

In their latest blog post, the folks at AdDuplex have painted a picture of the low end of Windows Phone dominating more and more as time goes on, i.e. in terms of price and spec. While this is an interesting data point, it certainly doesn't tell the whole story, and I thought some balancing caveats were in order. Just what are the proportions of Windows Phones/Lumias out there?

Here's the headline slide from the blog entry: 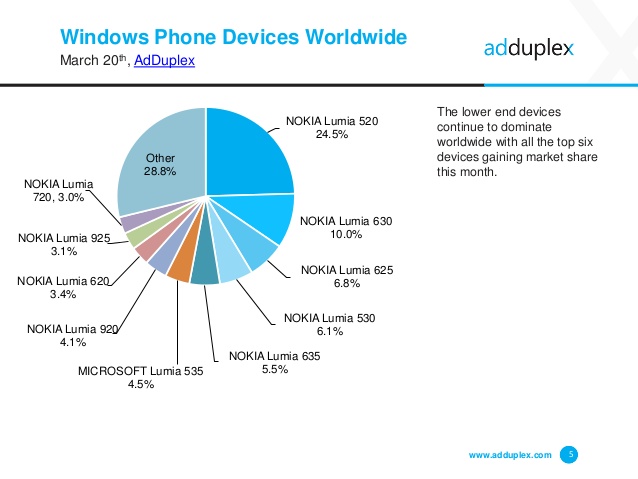 AdDuplex says: "This report is based on data collected from 5,265 Windows Phone apps running AdDuplex SDK v.2. The raw data analyzed was collected over the day of March 20th, 2015 (UTC time)"

Now, right up front, I should add that the stats above look roughly right - but only roughly, and I suspect there's a skew that isn't evident to the casual reader.

For starters, there are the obvious caveats:

But then there's the real kicker, which takes some lateral thinking. At first glance, the chart appears to show the proportions of Windows Phones in use - as I say 'installed base'. And it's along the right lines. But it's only counting users running applications which happen to have a specific ad network's code included.

Looking at my own phones, I have almost NO ad-supported applications installed - if I like an app that much, I pay for the 'pro' version or pay in-app to get rid of the apps, which simply get in the way. However, looking at my 10 year old nephew's Lumia 630, there are ads in every single game and in every third party application. Something of a personal observation then, but I did check via Twitter opinions, and it seems as if there's an extremely clear correlation between limited means and the use of ad-supported apps. The logical conclusion is that these users will be those buying the cheapest and lowest end phones, as borne out in spades by AdDuplex's chart.

However, the highest end Lumia in the chart is the classic 920, at 4.1% and there's no mention whatsoever of the 1520 or 1020, and so on. Now, I don't pretend that the chart should be the other way around, I do agree that the low end will naturally dominate - after all, the cheaper something is, the more units will be sold. But I do contend that there's a slight skew in AdDuplex's stats too much in favour of the low end.

Just a guess, but I'd estimate that a truer installed base breakdown would be:

Your comments welcome, though of course AAWP itself will have its own natural skew, towards enthusiasts and 'power users'. Gah. Lies, damn lies and statistics, eh?