How to: ditch Photos and use Lumia Storyteller instead...

The apparent duplication in having both Windows Phone 'Photos' and 'Lumia Storyteller' on most Lumias is a little confusing, but a little investigation reveals that the latter can on the whole be used as a replacement for the former, and with significant extra features and tie-ins. It doesn't make much difference for the everyday Lumia, but for the Lumia Camera 5-compatible smartphones, it's very worthwhile making the switch, opening up the full gamut of modern features.

Photos is very familiar to all Windows Phone owners, of course. The emphasis has shifted through the different OS versions so as to now present all images rather than having to make you know to dive into 'Camera roll', but not that much has changed over the years. Support was put in, back in 2013, for the 'Reframe' function for high megapixel PureView images, but to my knowledge nothing significant has changed since then.

Meanwhile, Lumia Cyan brought 'Living Images', short snatches of video grabbed with each photo and potentially played each time the image is browsed to, and Lumia Camera 5 (for compatible devices) brought Rich Capture, the customisable combination of multiple photos at capture time to create HDR and dynamic flash effects, plus the facility to grab (up to) 8MP stills from 4K fast-captured video bursts. And, sadly, Photos hasn't been updated by Microsoft to allow for any of these various innovations and the file changes needed behind the scenes.

Now, living images is something of an affectation, I'd argue - if it's not supported then no one's going to shed any tears. However, not being able to edit 'rich captured' images and not being able to grab moments from (up to) 4K video bursts is a much bigger deal. A huge deal, in fact. And, with Windows 10 development now consuming all of Microsoft's mobile development talent, it's extremely unlikely that such core elements of the existing Windows Phone 10 will receive any update love. Photos will be there in Windows 10, of course, and it remains to be seen how much of the Lumia Camera stuff makes it into codebase by means of support.

Happily, a viable replacement for Windows Phone Photos has been hiding in plain sight - Lumia Storyteller (née Nokia Storyteller, try the link if it's not already on your device!) turns out to include all the functions of Photos, even if not all of them are obvious at first. Don't get too put off by the initial 'feature overview' (this is later accessible on the menu, by the way), which emphasises geolocation of photos and the creation of online video stories - you don't have to use any of this if you don't want to.

Here then are some of the main features of Lumia Storyteller that you will use - and appreciate - if you stick with it, instead of Photos:

By default, Storyteller tries to group photos in sets or 'clusters', sorted by date and by location - this works very well if you either use geotagging on your photos (I don't, for privacy reasons when sharing - I'd hate to have to remember to keep stripping location when I go public, so I just don't save location, period) or if you shoot in bursts, at events (again, I don't, I shoot every day, in addition to at events - what can I say, I'm prolific!), but it's a buggy mess when faced with a constant stream of location-less photos, as seen below, left: 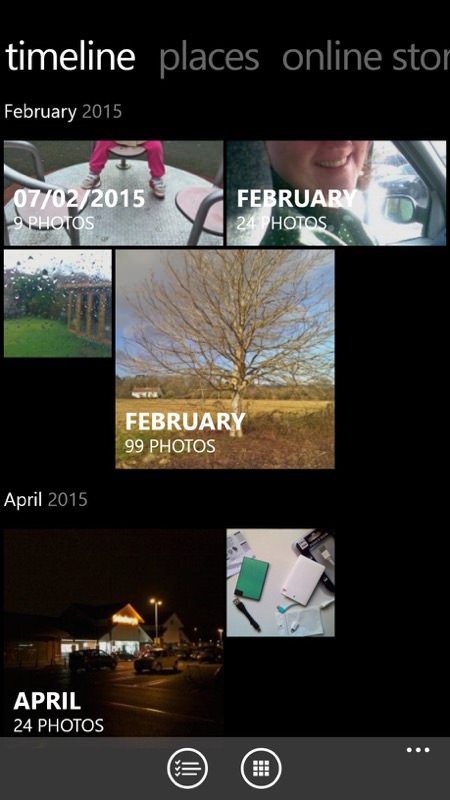 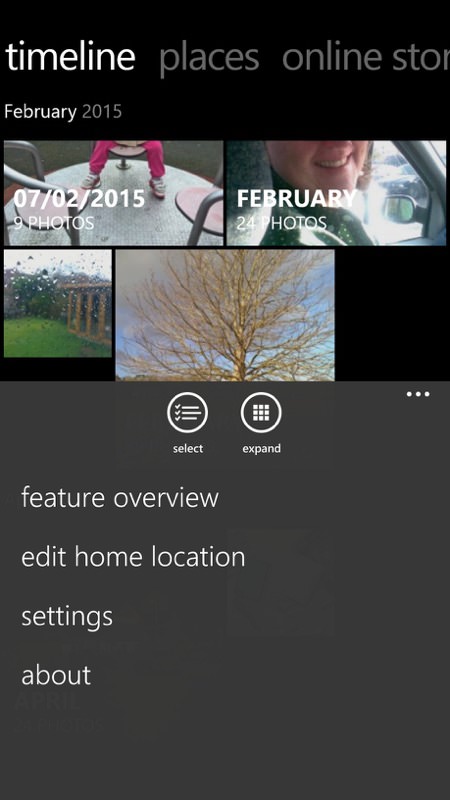 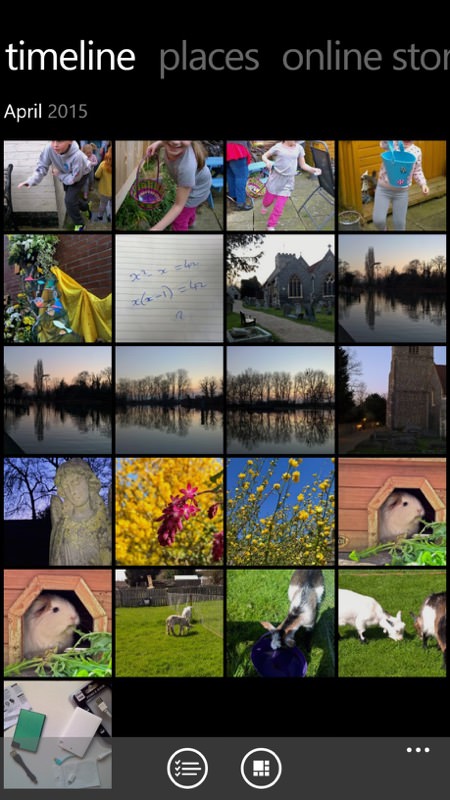 Happily, look on the toolbar, there's a slightly cryptic 'expand' control - this 'expands' the clusters into the full timeline of all photos, whenever and wherever they were taken. This, for me at least, is a hundred times more useful, but of course your mileage may vary.

Not displayed here, for obvious reasons, but living images are fully supported, if you had this feature turned on in one of the Lumia Camera versions. Those initial pre-capture mini-videos will play as you browse from image to image in Lumia Storyteller.

Also full supported are the multitude of extras that came in with Lumia Camera 5. So, after shooting a Rich Capture image (the example below uses the dynamic flash feature, i.e. with and without), there's the direct opportunity to edit/tweak it. 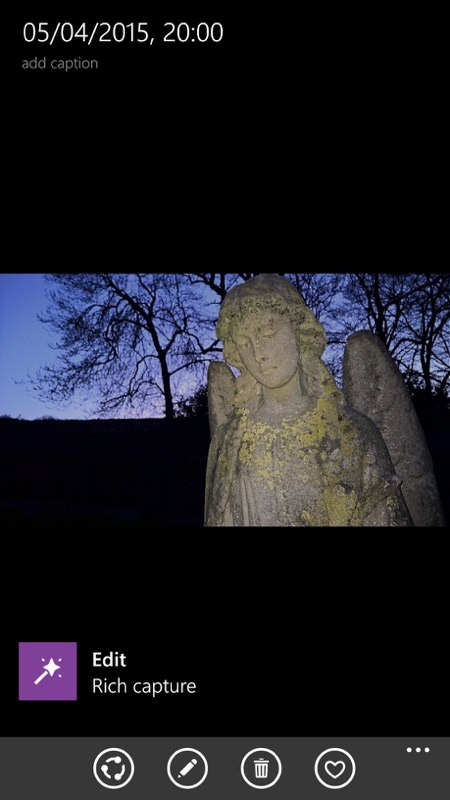 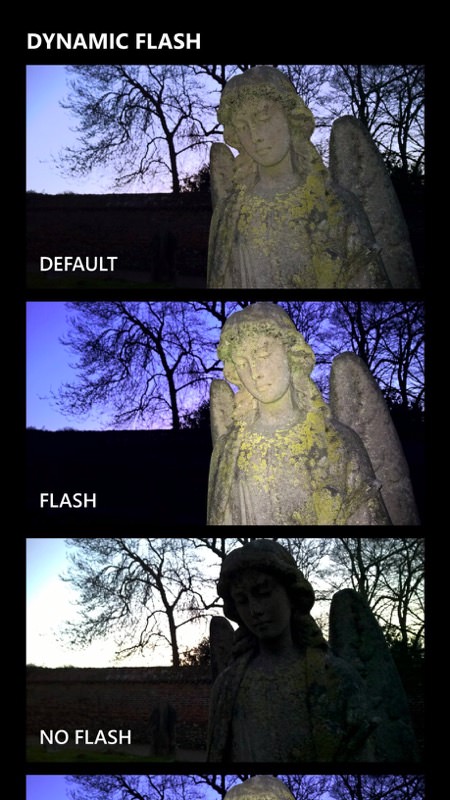 Also, though not shown here, after taking a video, 'Edit moment' is also offered, taking you straight through into the Lumia Moments editor.

One of the bug bears of Photos is that you can't select videos for deletion in the same way as photos. So, at an event, if you take a dozen video clips, if you later want to delete some of them, you have to do it individually. When trying to reclaim some space in a hurry, this can be a real pain. Happily Lumia Storyteller supports multi-selection of both photos and videos, as shown below, left: 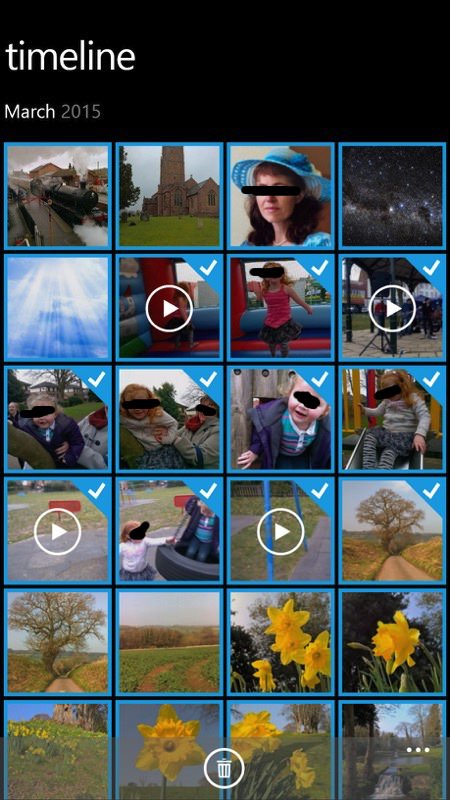 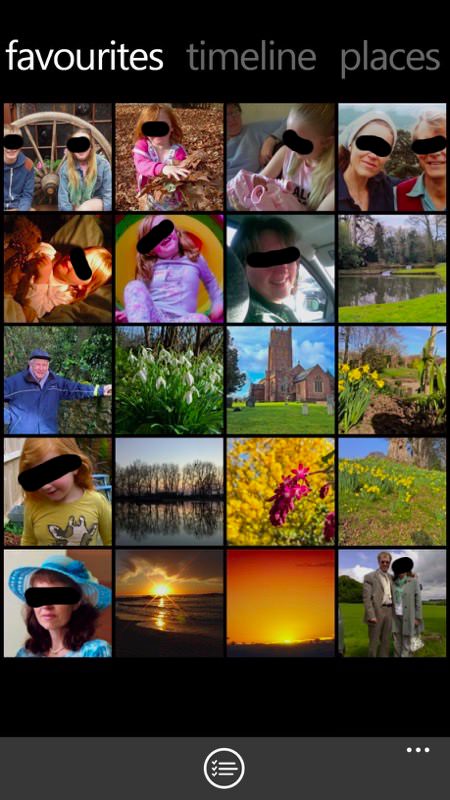 One worry will be that, by switching to a different application, you'll lose all the 'favourites' that you've marked over the months and years in Photos. Not so, your existing tagging of photos with a 'heart', i.e. as a favourite, is all preserved, and Storyteller also has a Favourites view, above, right, just as you remembered from Photos.

Plus, of course, the extras that Lumia Storyteller boasts about, using the online story sharing tool, expanding geolocated photo sets on a map to show exactly where each was taken. There's plenty here to explore when you're ready.

One thing that may puzzle you is how to be specific as to which folders are and aren't shown in Storyteller's timeline. In my case, for example, I do a lot of screenshots and I didn't want these to show up, but you may have other photo/image sources. The secret is to go into settings within Storyteller: 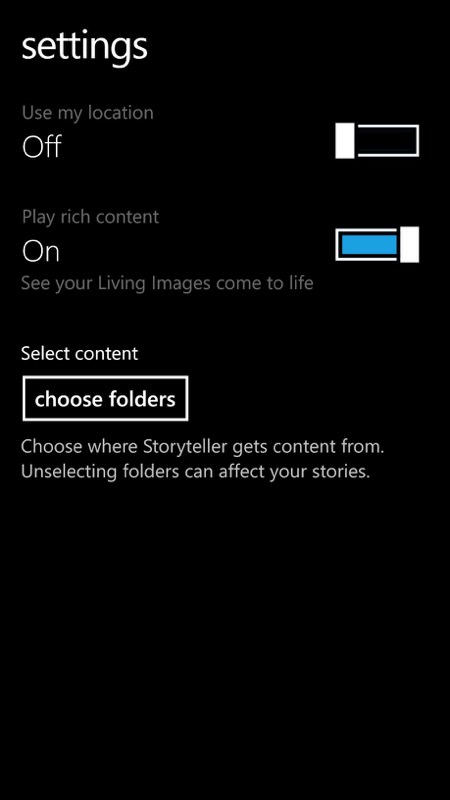 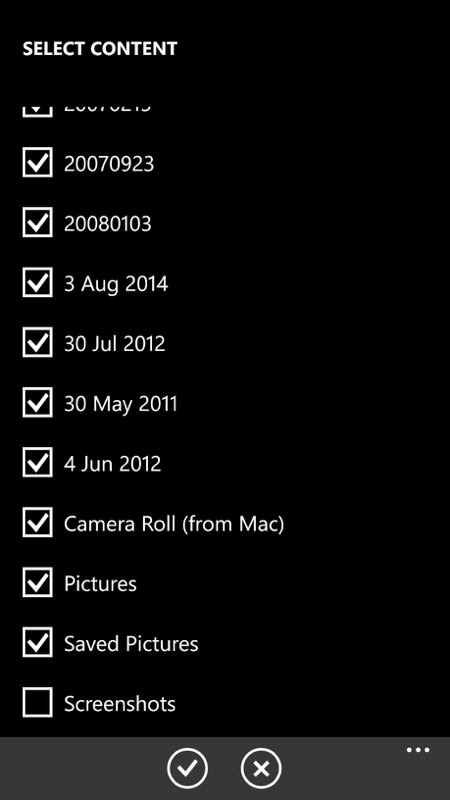 Tap on 'choose folders' and then de-select any that you don't want included in Storyteller's timeline.

Like Photos, you'll want Storyteller front and centre on your Windows Phone's Start screen (hint: long press Lumia Storyteller in the main applications list). It too supports a double-wide tile, cycling through and animating some of your favourites, so it's effectively a direct replacement for Photos here too: 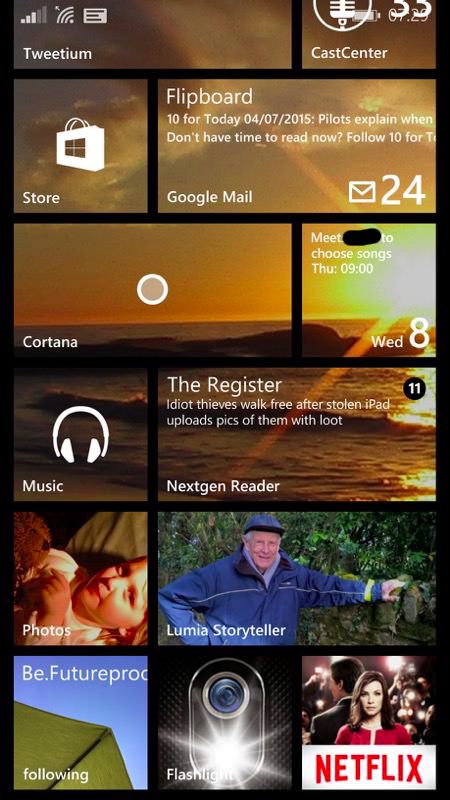 As you'll see above, I do keep a smaller Start screen tile for Photos as well, but it's mainly so that I can manage screenshots (in my role at AAWP), in most cases you can probably 'unpin' your old Photos tile once Storyteller is 'pinned' properly.

Surprising me at every turn with its tie-ins to Lumia Camera 5 and other 'modern' Lumia functions, Storyteller has now become one of my most used Windows Phone applications - maybe it'll become one of your favourites too?

Filed: Home > Features > How to: ditch Photos and use Lumia Storyteller instead...