The state of iPlayer on Windows Phone: more attention needed by the Beeb!

Look in the Windows Phone Store for BBC iPlayer (at least, if you're in the UK, anyone else need not apply!) and you'll see a client for this incredibly popular streaming and catch-up TV service from the UK's national broadcasting operation. Look a little closer and you'll see huge numbers of negative reviews, talking about laggy performance, constant buffering and break-up. How can an application be this bad? Well, in fact it's not. But it's also demonstrably in need of attention by the BBC, should anyone from the media division be listening to AAWP. You see, it only works fine on a specific portion of the Windows Phone hardware range.

Going in search of a way to catch up on some documentaries from the last month, I headed for BBC iPlayer on my Lumia 1020. There it was in the Store, along with the aforementioned terrible reviews. Hmm.... I installed it anyway and, sure enough, trying to watch archived programmes or, indeed, live TV ended up with stuttering video that was all but unwatchable. And this was with a very fast Wi-fi connection. Plus there was no way to download programmes for complete offline viewing.

How could it be this bad? What was the issue? At least I was seeing the same as all the reviewers in the Windows Phone Store. However, I also noticed that the reviews all came from older devices like mine or from low end. budget handsets. So I installed BBC iPlayer on my flagship Lumia 930 - and it worked like a dream. All programmes, all streams and channels played smoothly. I dropped back to my Lumia 830, with much less capable internals, and again everything was smooth and with no buffering or stuttering. I dropped back again, to my Lumia 640, the current budget recommendation in the Windows Phone world, and again all was super smooth and working perfectly.

I should add the slight caveat that this is all streaming - whichever device you have, there's no 'Download' facility, as on other platforms, due to DRM issues and the BBC's lack of investment in this platform. Which is disappointing, but not a showstopper, unless you were banking on grabbing stuff for a long train or plane journey, for example. In which case I'd suggest downloading movies and programmes by - ahem - other means. I suspect that  downloading may make a comeback on Windows 10 once the desktop version hits and the BBC starts to take more of an interest, in which case the Mobile variant may well acquire the same facilities as on laptops, etc. Watch this space. 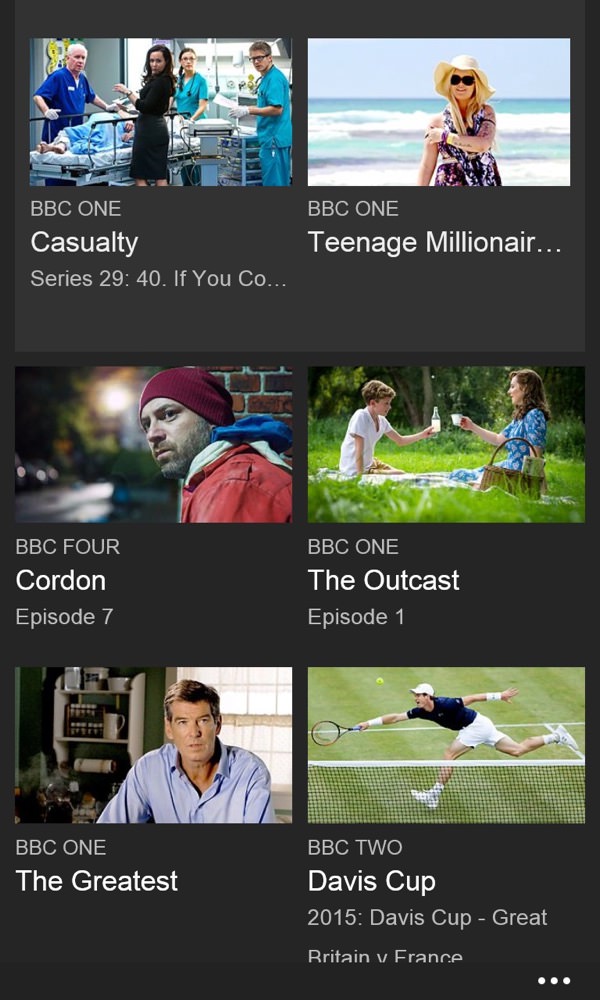 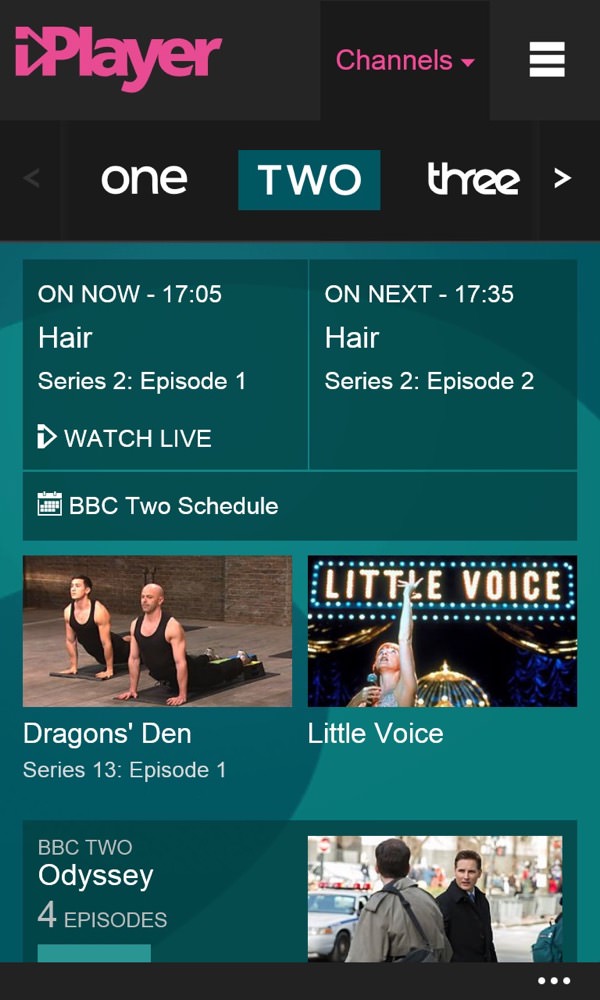 The front page top selections and (right) diving down into the live TV channels...

As anyone who's watched BBC iPlayer will know, along with Netflix and a few other video streamers, the bitrate and resolution used is adaptive, in that the server and client start at low quality and resolution and ramp things up if the connection is good enough. You can see this happening (within a few seconds) on the devices for which iPlayer works smoothly.

Where iPlayer's not working is when running on devices with the older Snapdragon S4-based chipsets and also the newer but weaker Snapdragon 200 series (think Lumia 435 etc.) - the former category includes the massively popular Lumia 520, accounting for many of the bad reviews in the Store. What seems to be happening is that the iPlayer server spots the fast connection and 'ups' the quality of the stream without taking into account the quirks and capabilities of the receiving hardware and software. Causing logjams in the decoding and a stuttering experience for the user. 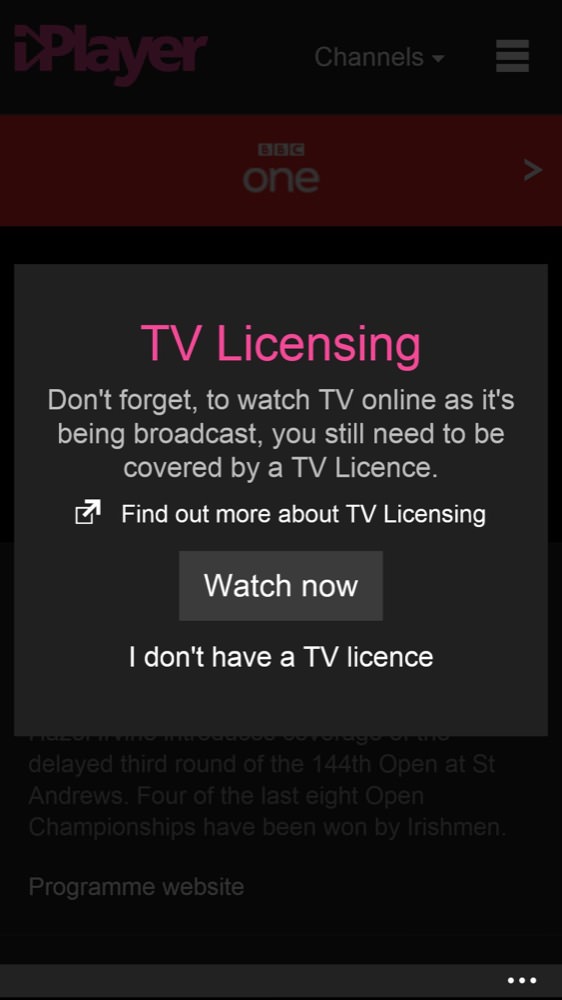 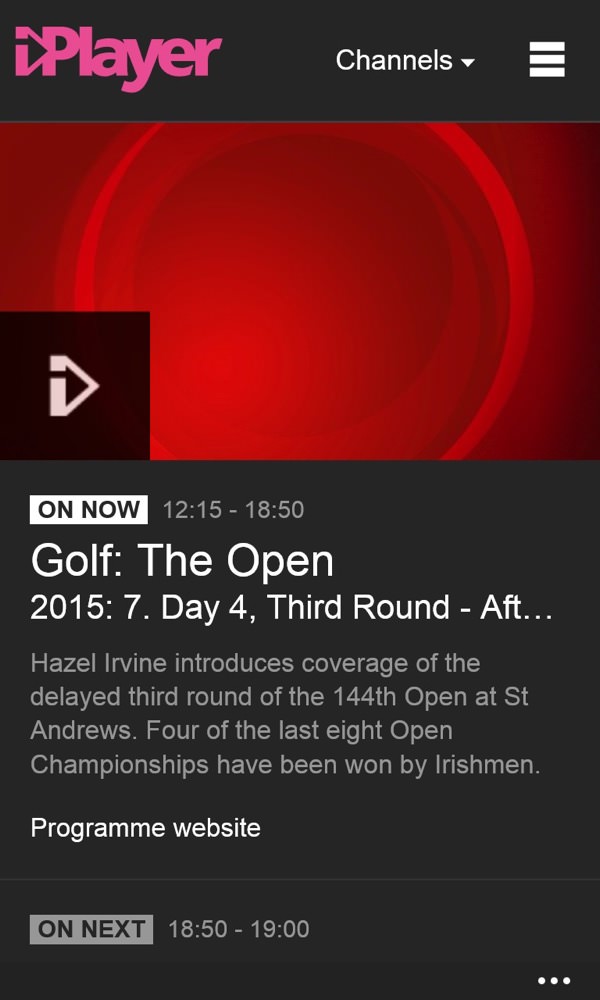 This is all for UK residents who have a TV license, of course. Phew, now that the lawyers are happy, let's settle down (right) to watch the golf!

Now, we know that devices like the Lumia 520 (and 1020 and 920 and a host of others) can play video at 720p quite happily, if the codec used and bitrate are sensible. I've sideloaded enough videos to have been able to test this. So the inevitable conclusion is that the BBC's servers are simply not configured to know what to send down the line for older and budget Lumias.

This fits in with previous BBC attitudes to anything that's not iOS or Android, sadly. But I don't think there's any malicious intent towards Windows Phone. And I do think that 'BBC iPlayer' was tested, as an application, a year or so ago, against a variety of Windows Phone hardware and found to work 'fine'. However, the BBC is constantly tweaking its streaming algorithms, trying to optimise quality and bandwidth use in the face of ever more powerful mobile devices. 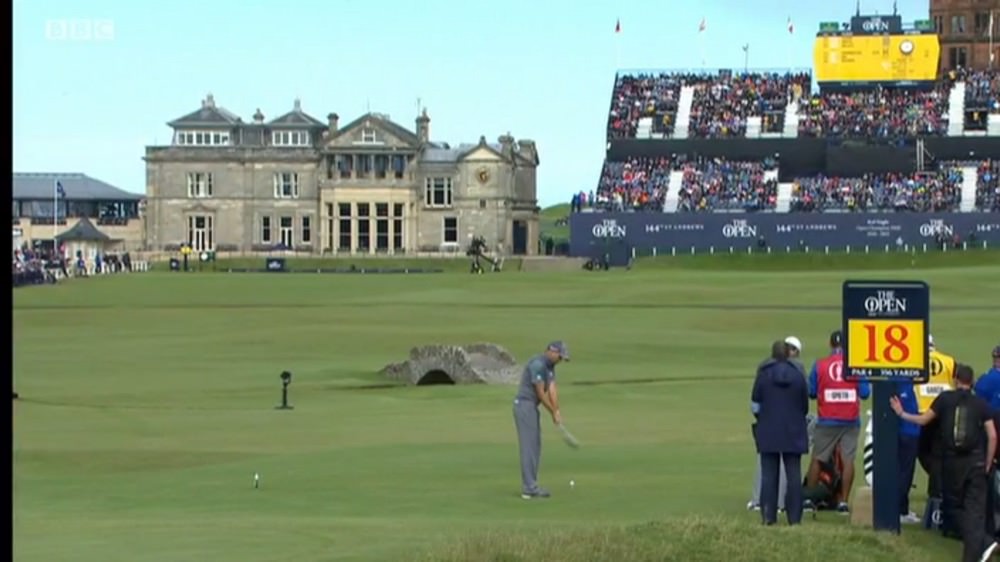 And, somewhere along the line, these tweaks started causing playback issues for Windows Phones. Now, the more modern and powerful devices (Snapdragon 400 and 800-based) had enough processor and graphical grunt to cope with the new streams coming in from the BBC's servers, as evidenced by my smooth enjoyment on the Lumia 640, 830 and 930. But budget and older Lumias have been left completely behind. And unnecessarily so, since they're quite capable of handling some of iPlayer's stream options - they're just not being sent the right ones. 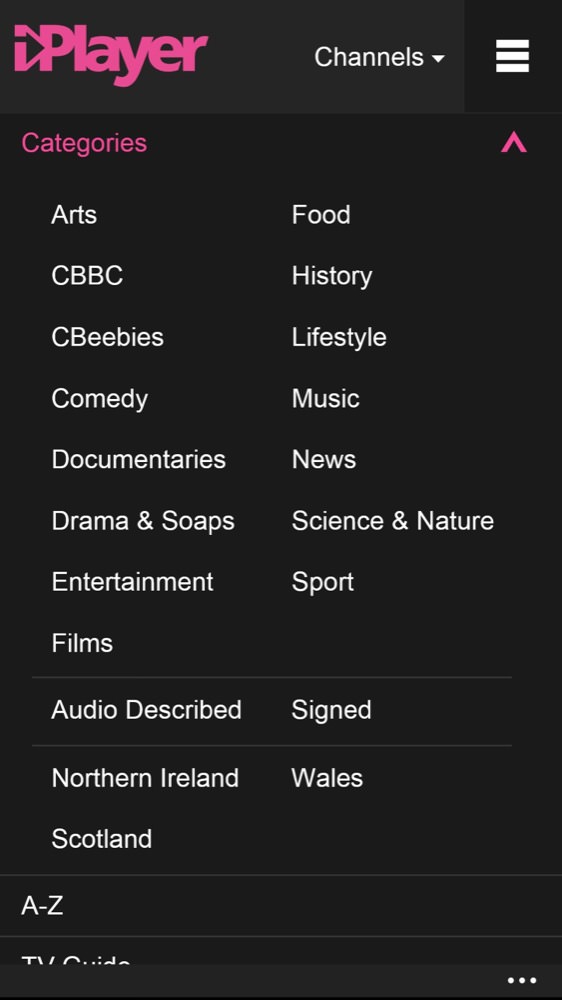 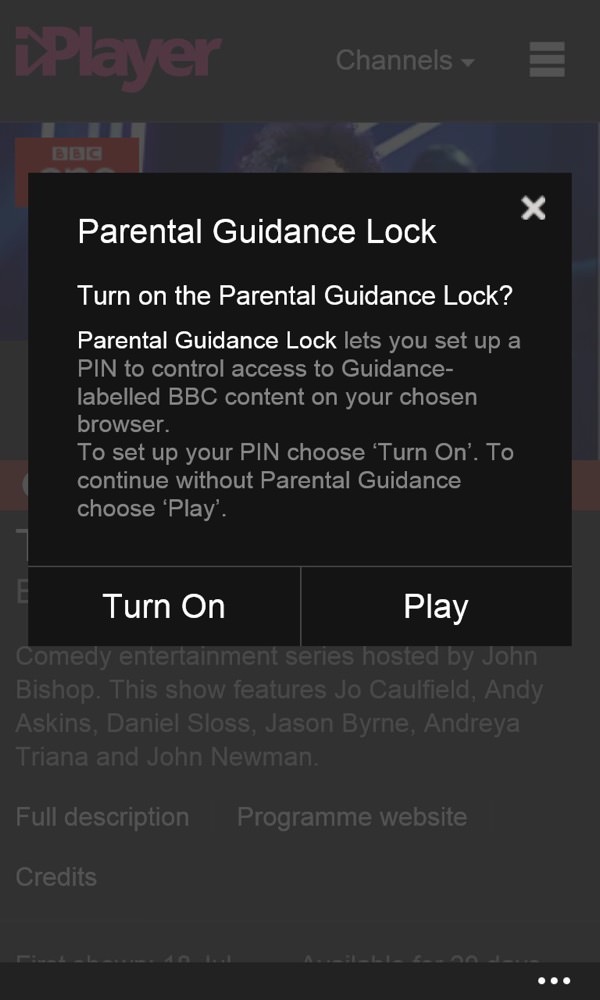 Browsing all iPlayer content by category, from the hamburger menu; (right) content is age-lockable too, should this phone be used by your kids. Worth setting up!

The solution, of course, is that the BBC invests just a little time in trying a few older Lumias with the current server set-up and adjusts some of its streaming settings if such a device is detected. And if the BBC can't afford to buy up a few old devices or can't find them in a drawer then Microsoft could donate a few. Heck, AAWP will lend the BBC a few to test!

Heck, all of this really isn't brain surgery.

Aside from the lack of a download facility, many have also criticised the removal of BBC Radio options from iPlayer, but do note the newer, separate BBC iPlayer Radio application which works pretty well, integrating seamlessly into the Windows Phone media player controls. 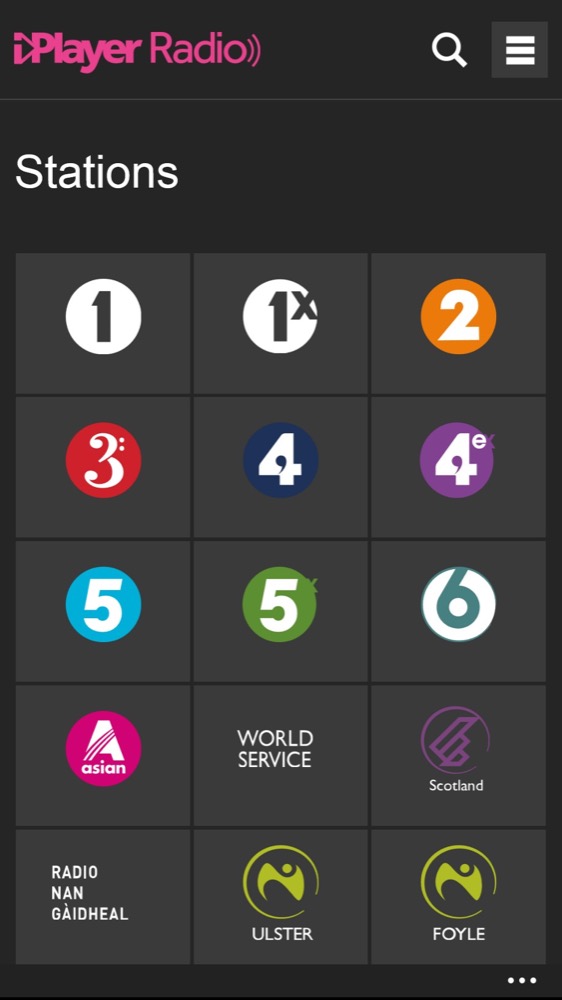 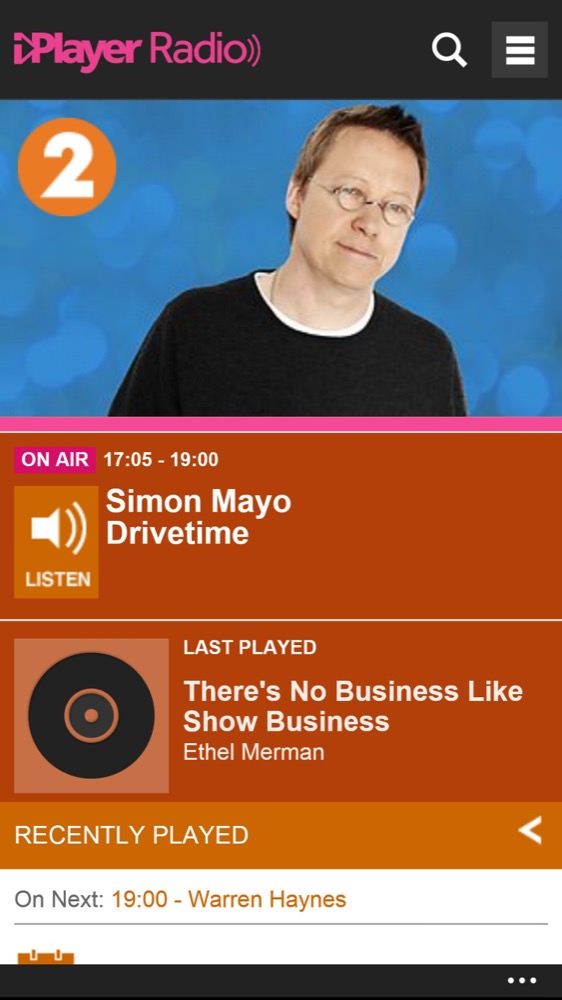 BBC iPlayer Radio is somewhat barebones, slow to start up, and a little garish in places, but it gets you to live radio easily enough, plus there are archived programmes and even MP3 downloads.

As long as you have a new enough device, BBC iPlayer is there, for both TV and radio needs, and works pretty well. But I have to call out the BBC (again) for taking their eye off the ball, especially in the UK, which is something of a Windows Phone stronghold (well, relatively, with 10% market share), since at least half the users trying to connect up to watch will be met by a jerky, stuttering mess.

Your comments welcome - do you use iPlayer on Windows Phone and do you concur with my own testing? And does anyone else feel a strong letter to the BBC coming on?

Filed: Home > Features > The state of iPlayer on Windows Phone: more attention needed by the Beeb!