In advance of my full review part (2) for the Lumia 950 and 950 XL, I wanted to set some data points up. Specifically looking at the 950 (and 950 XL) camera against its predecessor, the 930 (from 18 months ago) and the Lumia 1020 (from two and a half years ago). That I'm comparing with a smartphone camera that's so old is a tribute to how good, in terms of raw image quality, the 1020 was, though the user experience and performance in the newer devices is dramatically better, more than a single order of magnitude, from 1020 to 950. So bear that in mind too!

In the full review part, I'll talk about the camera tech in the Lumia 950, will critique some of the photos I've taken, will benchmark common actions and techniques and will get to grips with video capture too. But in the meantime, there's the six million dollar question: "Just how good is the 950's camera?" I'll answer that partly in the comparison below, partly in comparison to the LG G4, the commonly acclaimed camera phone champion in the smartphone world at the moment, and partly in the review part 2.

This feature, though, pits the Lumia 950 against the Lumia 1020 and 930, two very well known data points in the Windows Phone world.

This should be child's play for almost any smartphone camera, though the detail on the water and in all the vegetation requires care by the various image processing algorithms. Here's the overall scene: 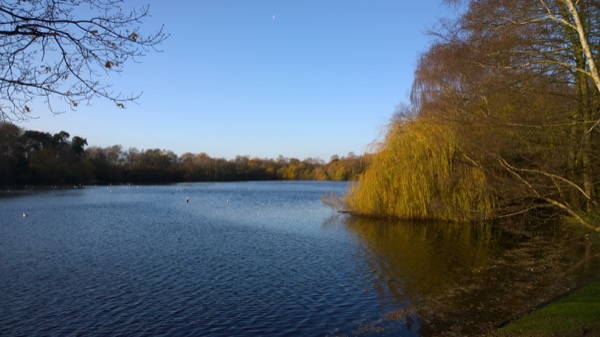 One thing that's very evident from this selection of crops is how far the image processing priorities have come since the days of the Nokia 808 and Lumia 1020. Look at the bottom crop from the 1020 - it's so incredibly natural, almost like looking through a window onto the scene. Competing smartphones have long featured image processing including extra sharpening and extra saturation, the idea being to make the photos look better at first glance on a typical display and never mind absolute purity and accuracy. 'Lumia Camera 5', debuting on the Lumia 930 etc. and here taken to extra lengths on the 950, goes very much down this road, as you can see, producing great results for everyday snaps but falling down when faced with masses of natural detail - think grass and vegetation here.

Maybe I'm being over-picky, but despite not being as 'bright', for me the Lumia 1020 photo is superior. Or at least less artificial.

Enough with the sunny snap, let's get on with the challenges. In this case one of the hardest things to photograph - sunlight through a stained glass window. Here's the overall scene: 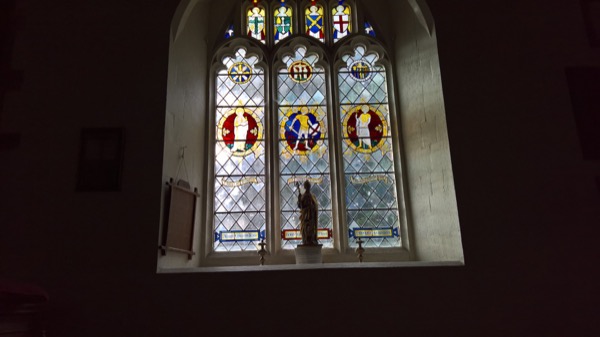 Despite the physics advantages of the much larger Lumia 1020 camera, the Rich Capture HDR tricks in the Lumia 930 and 950 come to the fore here, look at the figure on the left and then contrast the finer detail visible on the 950, where it's all blown out on the 1020. This is a great example of Rich Capture producing a better photo. The 930 sits between the other two devices, though it's slightly outclassed here. 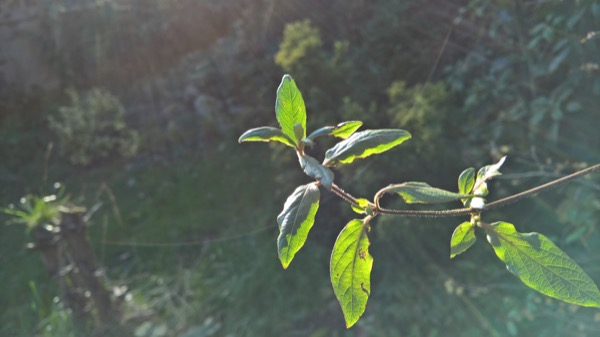 The Lumia 950 absolutely nails this one, as you can see, with perfect close focus, perfect handling of light and great depth of field. The 1020 does an arty job, but ultimately struggles with macros, as we know. While, again, the Lumia 930 gets close but loses it on some of the sunny highlights. In fairness, with the breeze blowing the leaves around a little, it's impossible ti get exactly the same framing and light from second to second. Maybe the 950 just got lucky. Or maybe it's really good at this sort of thing....?

One of my favourite test subjects, an illuminated chapel. To the eye at night it's always a wonderfully warm yellowy-orange, and with masses of texture. Let's see how the challengers do. Here's the overall scene: 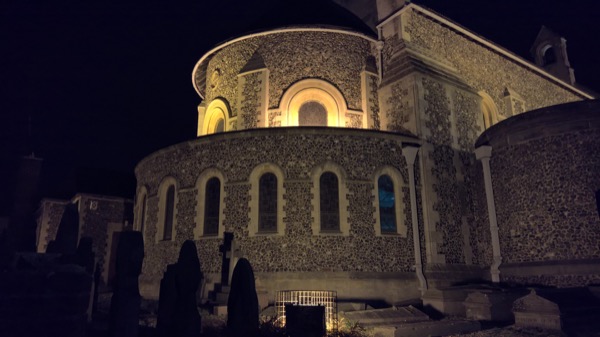 Detail is handled well by all three phone cameras, as you'd expect, these are three of the best. But the 1020 loses points for some blown out highlights, while the Lumia 930 adds a reddish tint that's just wrong. Meanwhile the Lumia 950 nails the shot again, with perfect colours and dynamic range. Very impressive.

Of course, given that all of these Lumias feature PureView zooming, I thought I should test this too, here in a partially sunny scene. Let's see how the challengers do. In each case I used the 'swipe up' gesture to zoom as far as the software let me go. In the Lumia Camera 4.x environment on the Lumia 1020 this was the PureView lossless limit of 3x, in Windows 10 Camera on the other two devices, the software tries to go well beyond this limit and adds in digital zoom interpolation and other techniques. With, in my opinion, degraded results. See what you think. Here's the overall scene: 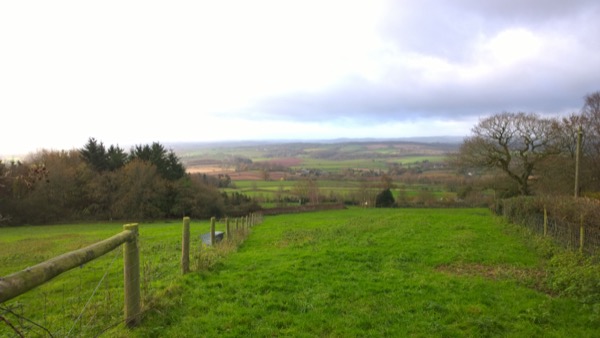 And here are fairly central 1:1 crops, after zooming as far as the software would allow, from the Lumia 930, 950 and 1020 (going top to bottom, click the phone names to grab the original images for your own inspection):

Although the Lumia 950 photo is, overall, the brightest, you can clearly see that the digital zoom and other processing makes a right mess of image detail if you look too closely. Ditto, though nowhere near as bad (interestingly) for the Lumia 930. In contrast, the Lumia 1020 stops at 1:1 on the sensor in terms of PureView zoom and as a result has perfect, natural detail. Microsoft, I'm just saying, please make it an option in Windows 10 Camera to not exceed the PureView zoom limit.

Another really tricky scene, a very dim interior of a church, lit only by the main stained glass and a couple of small side windows. Here's the overall scene, made to seem lighter than it was to the naked eye: 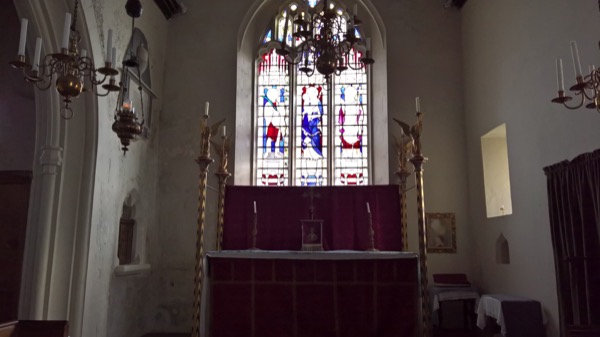 This test case is a good example of typical output from each of the three Lumias. The 1020 does very well in terms of detail and purity, for a 2013 device, but there's a yellow cast on the white walls which simply wasn't there in reality. The Lumia 930 does well, but can't match the 950, which equals the 1020 for detail while getting the colours spot on.

My standard party mock-up scene, with me deliberately moving, chatting and mock-laughing, in a low light situation. The sort of shot taken a million times a day around the world. This is the province of Xenon flash typically, but the alternatives are catching up. Here's the overall scene: 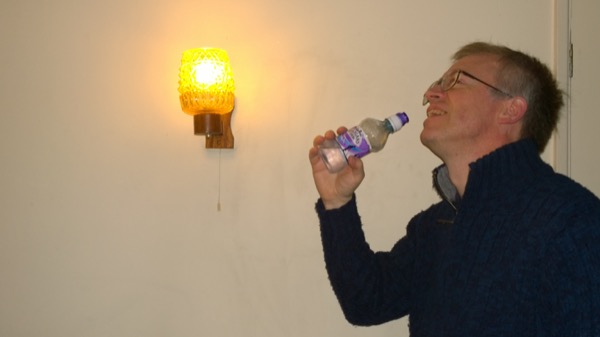 And here are fairly central crops (not down to 1:1 this time, because no one, even me, does pixel-peeping on social snaps like this!) from the Lumia 930, 950 and 1020 (going top to bottom, click the phone names to grab the original images for your own inspection):

In the case of the Lumia 930 and 950, I've used a 90% flash, 10% no-flash blend in the built-in 'Dynamic flash' system. It's evident that the 1020 still does well, but that characteristic yellow tint is evident - and starting to wear thin after all these years - you'd have thought that someone would have fixed this in software by now? The 930's image, with dual LED flash, is a bit dark, but acceptable (and fixable), while the Lumia 950, with tuned triple LED flash, produces something that, arguably, wins out here. It's bright enough, the colouring is natural and motion is sufficiently frozen, with a 1/100s exposure being possible.

Who'd have thought that a Xenon-equipped smartphone would get pipped in an AAWP camera party shot? Wow.

OK, now I'm getting silly. Just for fun I snapped the Handley Herald in almost pitch darkness. There was just a little light in the sky and I could just about see what I was doing in terms of walking. This is a dramatic test of the OIS and sensor light-gathering ability in each device. Here's the scene: 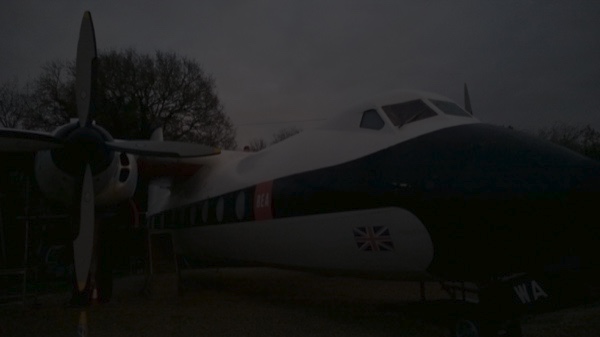 Here it's all about the terrifically low light and digital noise on the sensor. The Lumia 930 is about what I'd expect. Limited oversampling, a relatively narrow aperture, but the OIS enabled a crisp 1/3s shot, albeit with a lot of noise. The Lumia 1020 almost eliminates noise with its massive oversampling, but even with a crisp OIS-assisted 1/3s shot, it's still (just) outdone by the 1/5s shot from the Lumia 950, with the much larger aperture, so there's more light allowed in. In view of the light levels, surprisingly good results all round.

Points scores aren't everything, of course, and my selection of test shots was biased very much towards tricky and low light situations, whereas normal users will take most shots in much better conditions. But it's still instructive to add up the scores:

It's official then. I guessed yesterday on the podcast, halfway through analysing all my images, that the 1020 was just about on top for raw quality but beaten hands-down for experience. I was wrong. The Lumia 950 wins out by a margin on raw image quality too. And by even further if you stay away from extreme zoom - I do wish Microsoft would put in a hard limit for zoom - or at least a pause-detent when the sensor resolution is reached.

With great sensor, large aperture, next-gen OIS and triple LED/tuned flash, it's clear that the Lumia 950 (and 950 XL) camera is the best ever put into a Nokia, err... I mean Microsoft smartphone. I'm the world's biggest Nokia 808 and Lumia 1020 fan, yet I'm enormously impressed by the product here. Yes, grass and nature landscapes get mangled a little by the 2015 image processing choices, but for every day shots of people, towns, pets, food, and so on, I don't think there's a smartphone camera in the world that can beat the Lumia 950 right now. I'll be putting that to the test later today and over the weekend by bringing in the previous industry champion, the LG G4. Watch this space.