Glance on, Glance off: how to save (up to) 43% battery per day under Windows 10 Mobile

"Oh, around 1% per day" was my answer, somewhat glibly, when asked about the impact of leaving Glance screen (i.e. time, date, app detail and notification icons) 'on' all the time. Not the default these days, but I did measure it back in the day. Under a different OS, around six YEARS ago. Which is why I wanted an up to date measurement of the power drain caused by Glance on modern hardware, in this case the Lumia 950 XL. And (to quote Spinal Tap) I got it. And a WHOLE lot more.

There's no easy and obvious way to measure the drain, of course, in theory it could be less than the single digits mA region. So I measured battery charge (as reported by Windows 10's guesses) every half an hour for most of the day, firstly with Glance on permanently and then again with Glance turned off.

As I say, the percentage we all see at the top of each screen in Window 10 Mobile's Action Center (and on all other smartphones) is only really ever a guess, with the OS looking at battery voltage (typically between 3.6-3.8V most of the time), current drawn (e.g. measured using a 'Coulomb Counter') and temperatures every minute (or so) through the day and then taking a grand estimate, helped by the manufacturer's profiling of the voltage drop for that particular cell over its discharge range.

Before revealing the results of my tests, especially pertinent as we approach Mobile World Congress 2016, where LG is about to unveil the first Android smartphone with an 'always on' (a.k.a. Glance) display, I thought it worth running through a thought experiment and estimating a few figures about smartphone battery life.

Regardless of the OS used, a fully charged phone (usually overnight) needs to get the user through a full 16 hour day (7am to 11pm) as a bare minumum. If the phone was not to be used at all, all day, i.e. simply looking at standby life, we get a maximum drain per hour of about 6% per hour. Add in the whole point of a smartphone, i.e. using it, and it's clear that the 'standby' (i.e. idle) drain needs to be down in the 2% region, per hour. That way, at the end of a long day, a maximum of 32% will have been used up with background OS standby duties, leaving a minimum of 68% for the user's benefit. And hopefully more.

And remember that all of this is with the huge caveat that most real world phones will have some battery degradation through use, so '100%' won't be the full capacity as it first came out of the box.

Now, the drain for Windows 10 Mobile on my Lumia 950 and 950 XL devices is around 6% per hour. Both of these phones have Glance turned on permanently. Hey, I got used to this USP on the old Nokia Symbian phones, so why wouldn't I enable it on the 950 and 950 XL too? But exactly how efficiently is Glance implemented on Windows 10 Mobile on the new chipsets? Could it be that it's more of a burden than on older phones, especially those old Symbian devices?

Here then is a chart of what I found. The red and blue lines are for a 950 XL and a 950, the latter with a SIM in, but both hooked up to Wi-fi and syncing all the usual background stuff (email, etc.) and with exactly the same applications installed. Both had Glance screen enabled. At the bottom of the chart is a gold line, showing the calculated average battery drain per hour, levelling off at 6.3%: 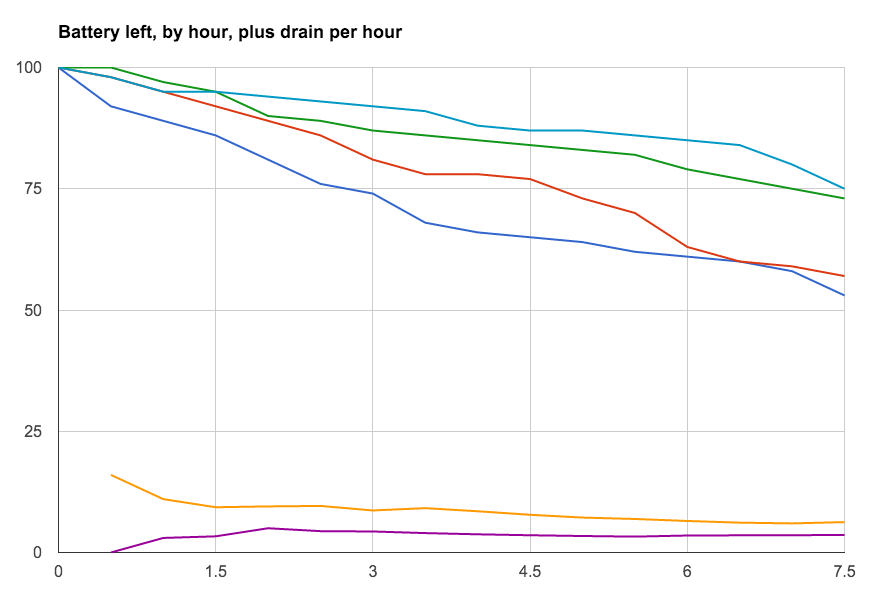 Now to those other lines. The obvious way to test the impact of Glance was to repeat the test but with Glance disabled completely. That's the green line, showing dramatically better longevity. The purple line at the bottom shows the calculated drain per hour and levels off at 3.6%. [Update: Re: the top blue line, I've also, by popular request, added the discharge under the same conditions but with Glance set to a small value, i.e. taking into account the continuous operation of the proximity LED on the front of the phone. As you can see, it's similar to the green line and within the margins of error, so I'm concluding that the proximity LED makes no difference whatsoever.]

To put this into perspective, Glance screen on Symbian used to drain a phone's battery by a few percent per day - the reworking for Windows Phone and then Windows 10 Mobile had progressively made things less efficient. The screens may well have 'display memory', but the updating/refreshing process, plus the power used by the display itself results in a drain of up to 2.7% per hour, at least on my Lumia 950 XL.

Half your battery capacity wasted per day?

In a worst case scenario, over the course of a full 16 hour dawn-to-dusk day, that's over 43% of your Windows 10 Mobile device's battery gone - JUST FROM USING GLANCE SCREEN. That's not counting all the other stuff that the OS needs to do. No wonder people are having battery issues with their Lumia 950 and 950 XL devices.

Now, there's a bit of a caveat here, in that while a phone is in a pocket or case, the proximity sensor will keep Glance screen off - the above testing was all done with the Lumia 950 and 950 XL lying face up on a desk. So that 43% wastage is indeed a 'worst case', this may all be a non-issue for you. But if your use of these smartphones also includes long periods where it's sat on a desk beside you then I strongly suggest going into Settings/Extras and switching 'Glance screen' to '30 seconds'. This way, at least you can see the Glance display at any time by waving your hand over the top of the phone (e.g. in the middle of the night), but it's off the vast majority of the time.

Will Microsoft be able to tighten up the Glance screen code to reduce the impact of this feature being permanently enabled? It's not certain - plus Glance screen isn't permanently on by default, so most users will live with the current 'peek' system, and will be perfectly happy. But if you're a Symbian or Windows Phone old hand, used to Glance being on all the time and not having to worry about battery impact then think again - Glance is a killer under Windows 10 Mobile on the Lumia 950 and 950 XL.

PS. Interestingly, as you can see from the comments below, Glance under W10M on older phones with less hungry chipsets seem to be less affected. So maybe Microsoft can make the feature more optimised for the Snapdragon 808 and 810 chipsets in the fullness of time?

Filed: Home > Features > Glance on, Glance off: how to save (up to) 43% battery per day under Windows 10 Mobile