You may remember that a recent update to the Microsoft Band 2 added a new hiking tile? Well, there was a corresponding update to the Microsoft Health application and I've been trying the whole system out when off for a walk in my local area and, though I'm yet to test it on an all-day hike (I'll leave that to Rafe and the wilds of Wales!), I've been quite impressed. Here's a write-up of what to expect with the Band 2 in 'hiking' mode.

I suppose I should start with the name - the Band 2 and the Health application call this function 'Explore', but that could be misinterpreted (e.g. exploring a tourist attraction or a cave or even something online!), so I'm going keep calling it the 'hiking' tile, as that gets the sense of it over best, I'm sure you won't mind! 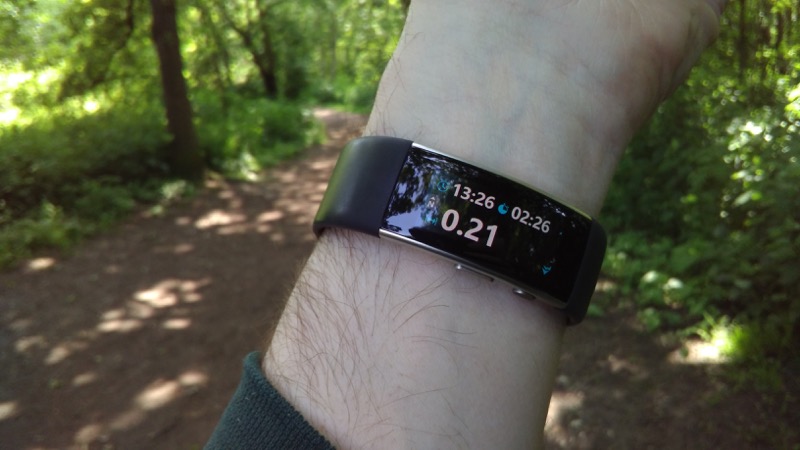 It's a perfectly vaild question to ask what was wrong with the 'Run' tile - after all, isn't the difference between a run and a hike just a question of speed? Which is true in a way, but the monitoring software (in the Band) has a slightly different job to do.

The most important is to eke the Band 2's battery out longer, meaning that it has to check heart rate and GPS less often (every fifteen seconds at a guess - it's hard to tell exactly since the act of powering on the screen to check is artificial!). But there are other functions which might be of use to someone walking (and not running):

Both aimed at helping you find your way back to your starting point and finding stuff again later on, on a map. You wouldn't have time to use either of these extra functions on a run, in all probability, at least not if you were a serious runner - I suspect that casual joggers may find that the 'Explore' tile here has uses after all!

Here's the ideal scenario for the tracking feature: 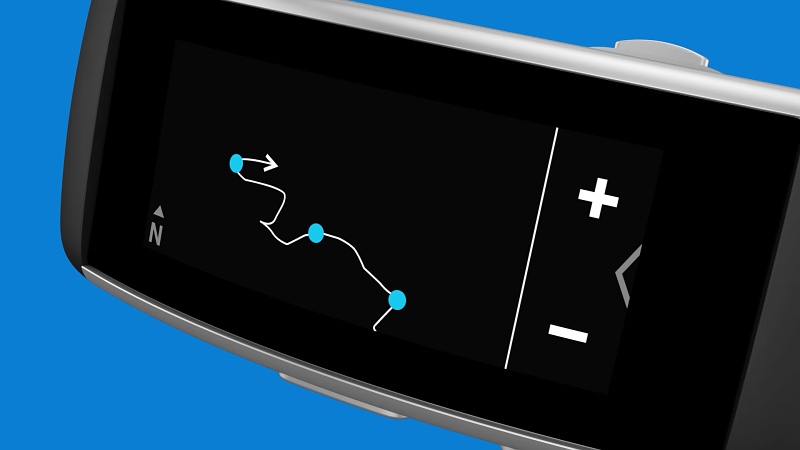 I've tried doing my own tracks and photographs thereof, on my Band 2, though they involve more straight lines and less obvious 'out on the trails' artistry, plus the +/- zoom control is very coarse - it's either in or out, I'm sure Microsoft will fix this in an update. Here's an example from one of my own walks, it's nowhere near as 'obvious'(!), not helped by the lack of visibility of the relatively weak AMOLED screen out in the sun: 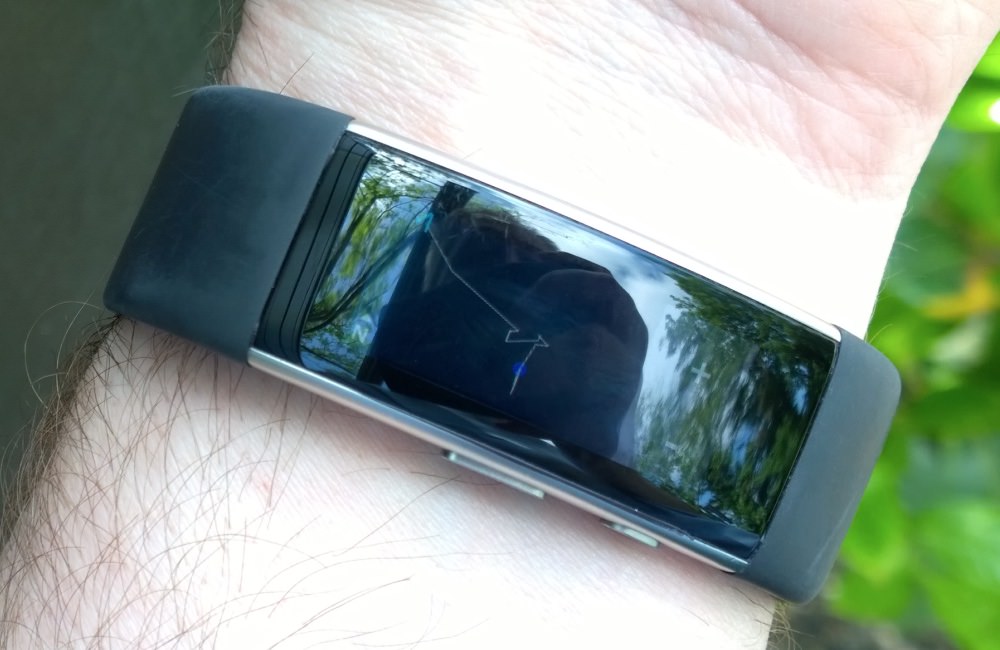 The 'Explore' feature and its UI are optimised for longer hikes, I think, many hours and over many miles. Which is fair enough, Microsoft, only a writer like me would be testing this thing around a local beauty spot that it's impossible to get lost in! Real world users would be out in the wilds somewhere?

Setting a 'point of interest' (here the observation stage by the lake) is done by powering on the Band 2 screen with the main (centre) button and then double pressing the (right) action button. This prompts the creation of a point of interest with a simple 'Y/N' tapped response. You'll see what becomes of these later on, though they can in theory be used, in conjunction with the track view itself to find your way back to a particular spot, as shown off so well in the video promo at the bottom of this feature.

In addition to the 'track' view, there are the same statistics for your activity as when running, in terms of duration, distance peak and average heart rates, and so on. You can bring up the screen and swipe from side to side to see the various views and, when your hike is over, there's a big 'End session' button that you have to remember to swipe to and tap unless you want all your stats to be skewed by the two hours down the pub after the walk!

Of course, it all gets synced to Microsoft Health on your Windows 10 Mobile (or Android or iOS) phone the next time you boot up this application. There's no real server-side analysis needed, since Health and the phone have all the data they need, so you can dive into the stats immediately (unlike with, for example, the sleep tracking, which seems to take a fair few minutes while Microsoft's servers take a look at your heart rate and other sensor information from the previous night).

Here's a walkthrough of the Microsoft Health presentation after my mile or two round our local beauty spot (spoiler: most of it isn't that beautiful, don't make the trip specially!)

The 'Explore'/hiking tile appears in the main strip of activities, of course, with distance covered per day (just as with running): 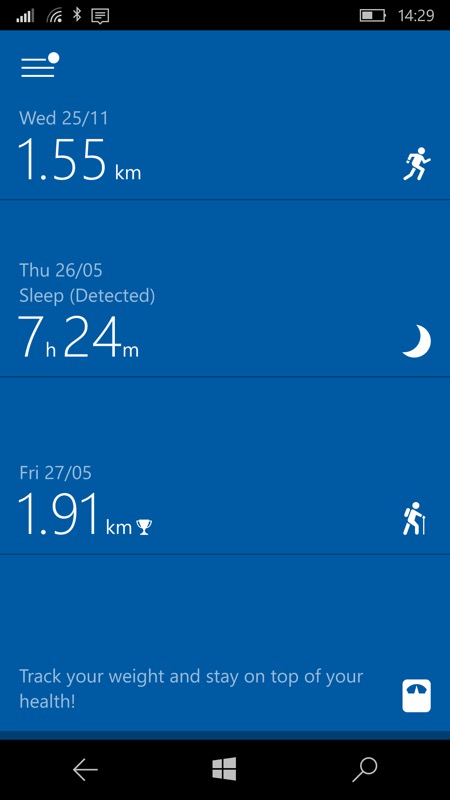 A single tap through and there's much more information: 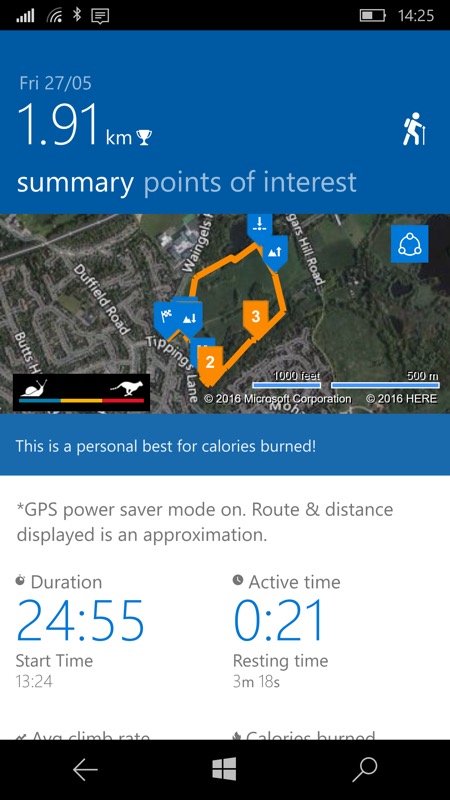 The share icon, top right, indicates that your hike is easily shareable (via a public Microsoft Health dashboard online), then you can swipe up to go through all the usual essential stats. The mini-map overview is pretty and well-annotated, but you can see it in much more detail by tapping on it directly: 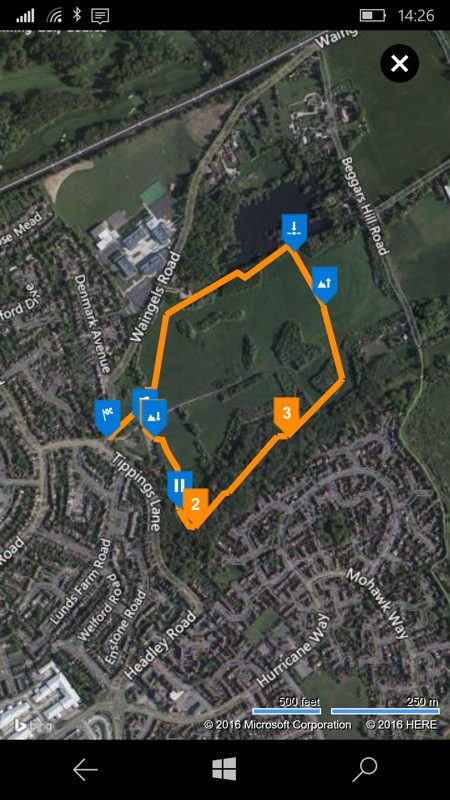 Now this park is well known to me and, considering that 'GPS Power Saver' is always on when hiking (to keep battery life decent), I was surprised that the track was so (relatively) accurate. The map's zoomable in the usual multi-touch way too, though do allow a few moments for all the aerial imagery to come in from Microsoft's map servers: 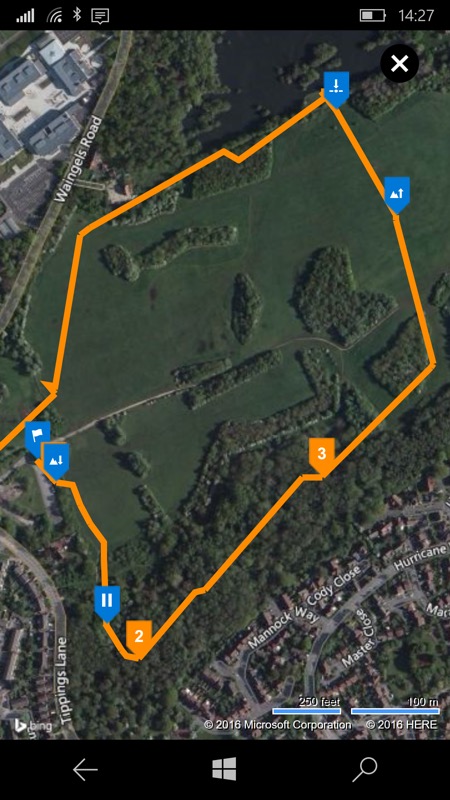 The mapping of all the various elements onto the aerial imagery is very good indeed considering that the GPS was only being used in a pulsed mode and considering the usual slight mismatches between (3D) GPS coordinates and 2D mapping.

Zooming right in on the map gives a clue as to the granularity of this tracking in the hiking GPS power saving mode. Fixes are often about every 10-30 metres or so (depending on how fast you're walking!) and joined with straight lines but, on a decent walk or hike this level of approximation is absolutely fine. The screengrab below, shown with the map view zoomed right in, is probably worst case and even then you can make out that I went to the side of the lake, wandered off to the right to shoot a photo and then resumed my walk in a SW direction: 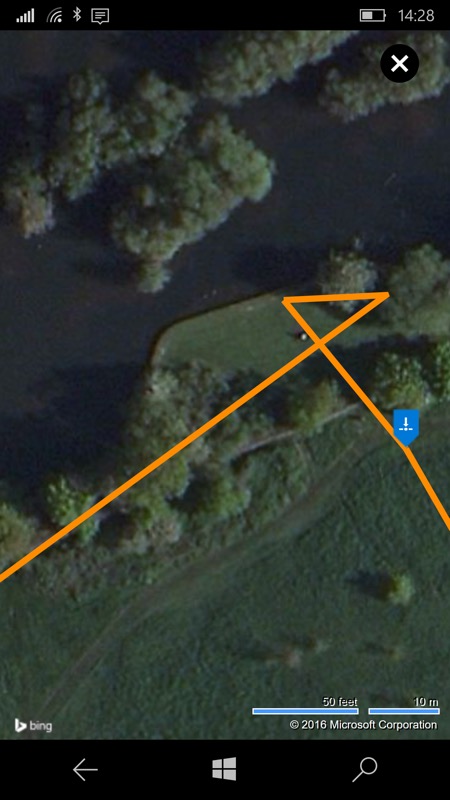 These tracks and POIs can all be exported from the Microsoft Health web dashboard, by the way, but that'll be another article for the future - here I'm just covering what you can do and see on the phone and Band 2 itself.

Then there are the other stats and views, with some rather nice illustrations of your sampled heart rate throughout the walk, showing where you put in the most effort (e.g. going up an incline): 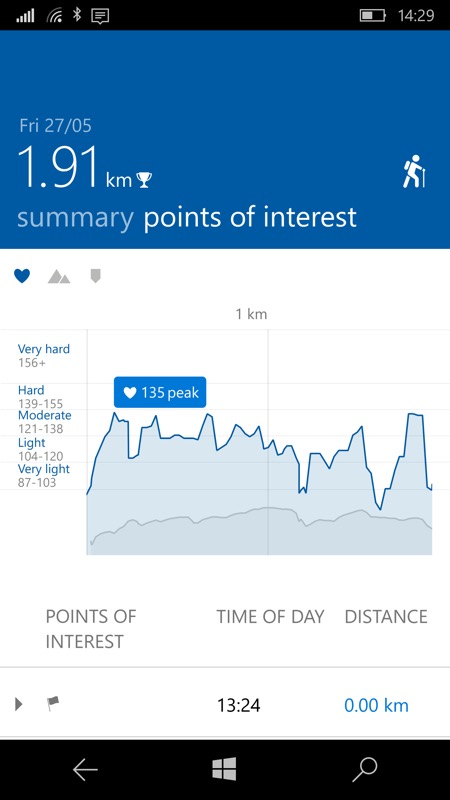 The Band 2 is also logging altitude and this forms another interesting view of the hike, and with the helpful addition of your points of interest, laid out in linear fashion: 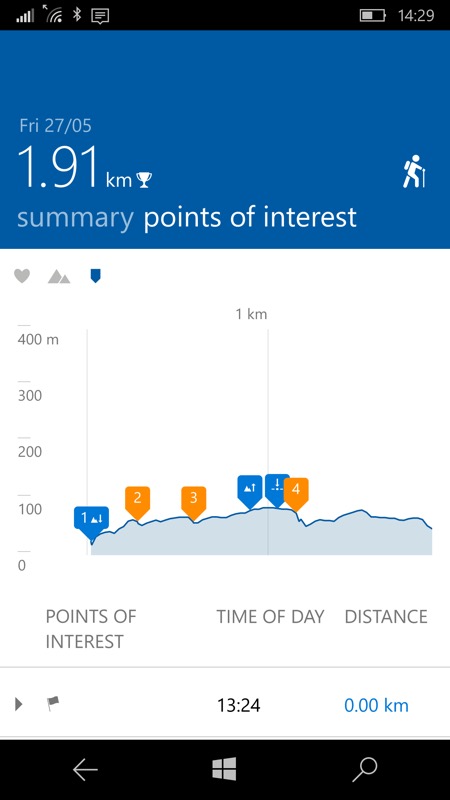 You've probably gathered by now that I'm enthusiastic about the 'Explore' tile, it's already my most used tile on the Band 2 (I'm not big on weight-lifting and other gym-based exercise, I don't play golf, and the thought of swiping past emails and even texts on the tiny screen isn't a pleasant one) and has given the wearable a new lease of life (for me).

Comments welcome - have you used this function yet on a decent length hike? The specifications show that the Band 2, fully charged in the morning, should be able to log GPS data all 'day' ("12 hours" is quoted) in this power saving mode - does your experience bear this out?

PS. The 'Explore' tile isn't available for the original Microsoft Band, presumably because its hardware and firmware don't support sufficient GPS power saving to last for a day's hike. The original Band wasn't much more than a prototype though, as I said at the time - the Band 2 is a much more polished product.

PPS. Just for completeness - and because I like it so much - here's the original Microsoft promo video for the Band 2 and the new 'Explore' tile: