In theory, the title of this tutorial should make no sense. After all, you just use the Flickr app, right? Oh yeah, there isn't one. What about one of the third party Flickr apps? Ah, they've all now stopped working properly. Hmm.... What about using Flickr via the web interface? Actually, this does provide a way forwards, though it's slightly more involved than you might think. Here are the pointers you need.

Flickr, of course, is well known, a great place to share your photos from, in the knowledge that the full resolutions will be retained and even downloadable by others, along with descriptions, EXIF metadata and more. Just a shame that Yahoo owns Flickr. And that Yahoo itself just got bought by Verizon. Ah well.

My goal here is to be able to upload a photo to Flickr, make it public and then add it to a number of relevant Flickr Groups. That doesn't seem too outrageous, does it? Flickr itself is often browsed on a tablet or desktop, i.e. on a large screen on which you can appreciate the images better. But with the cameras being so terrific on the likes of the Lumia 930, 950 and 950 XL, Flickr seems - in theory - a good fit for creating and uploading images direct from the phones.

With Flickr Booth having vanished into oblivion and Flickr Central having lost track of the newer Yahoo/Flickr login system, my thought was to use Flickr's own web site as the conduit for uploading from a Lumia and adding photos to groups, but I was foiled slightly by the 'mobile site' for Flickr dating back to 2008 or so and not knowing anything about 'groups'! Which got me started thinking about using the full Flickr web site - after all, if I could upload and share a photo using a Windows 10 laptop or Mac or whatever, all via the full web interface, then why couldn't I do the same with the new Microsoft Edge browser in Windows 10 Mobile?

As it turns out, I can indeed. With a few caveats! You see, the Flickr web site is heavily optimised to work on a desktop sized (and shaped) displays - it's a bit of a web travesty, really, and has few fans. But it kind of works, most of the time.

Anyway here goes. Keep up at the back and you'll be uploading photos to Flickr and adding them to Flickr groups in no time... 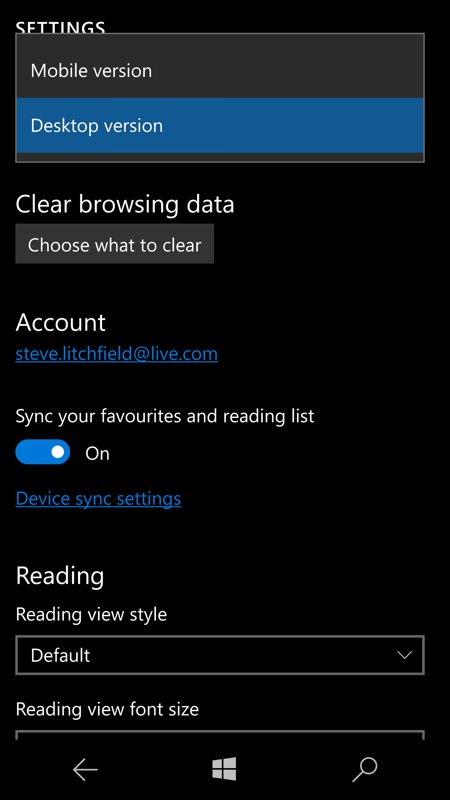 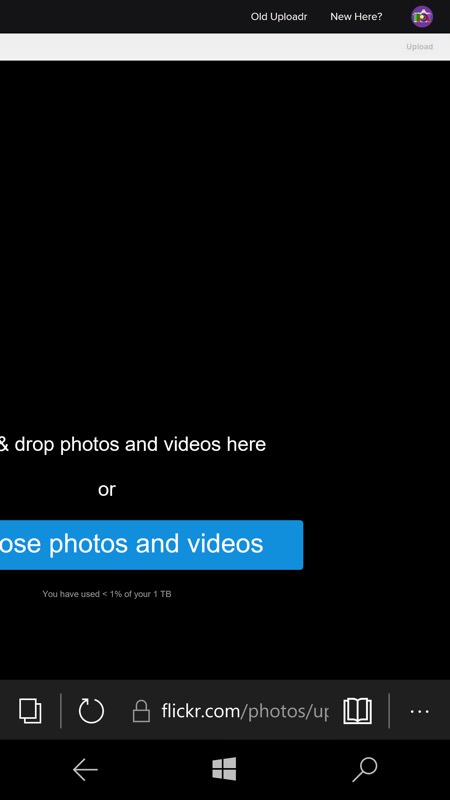 The first thing to do (and the last thing to reverse, probably, after completing this procedure(!)) is to pop into Edge's Settings and switch the 'Website preference' to 'Desktop version'. This ensures that when you go to flickr.com you get served the same page as if you'd been on a full Windows 10 laptop. Tap on the standard 'upload' icon and then peruse the new rendered page carefully. In this case, I've panned and zoomed in a bit on the top right - look for the tiny link to 'Old Uploader' - I've tried the javascript-heavy 'modern' uploader and it falls over quickly with the Windows 10 Mobile image picking and then text entry systems - trust me. 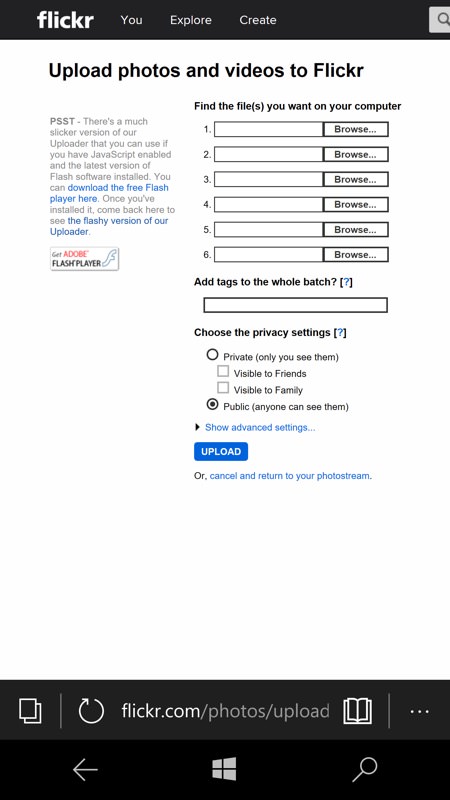 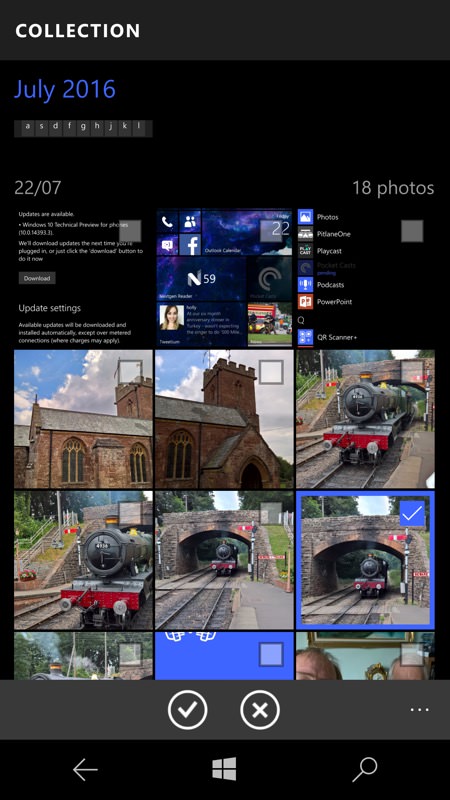 And so it's to the old uploader, very close to what you'd see if you started out with the Flickr 'mobile' (ancient) web site. But it does work. 'Browse' for an image in your Windows 10 Photos application in the usual way.... 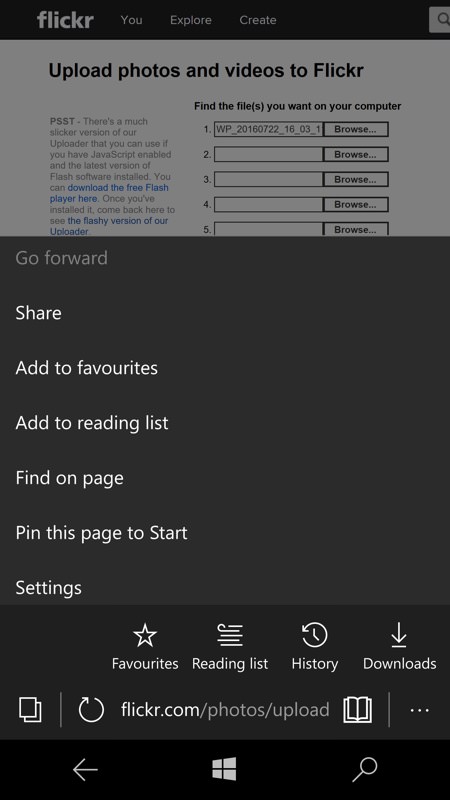 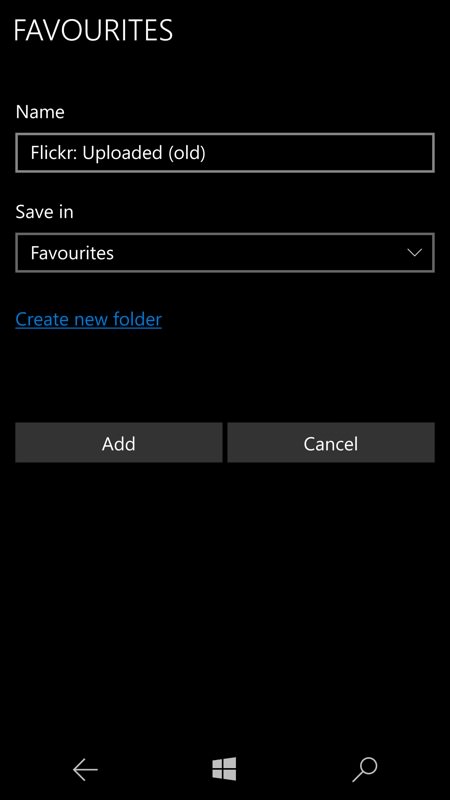 While you're here, if you haven't done so already, 'Add to favourites', for quicker access at a later date; (right) Oops, yes, just spotted my own typo above! 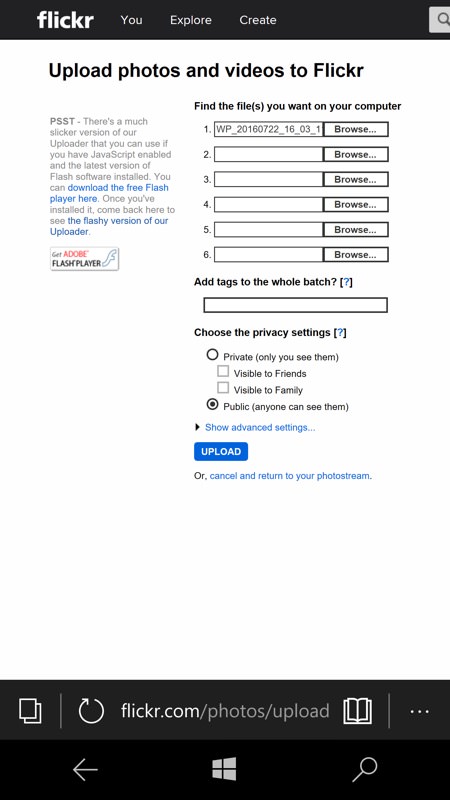 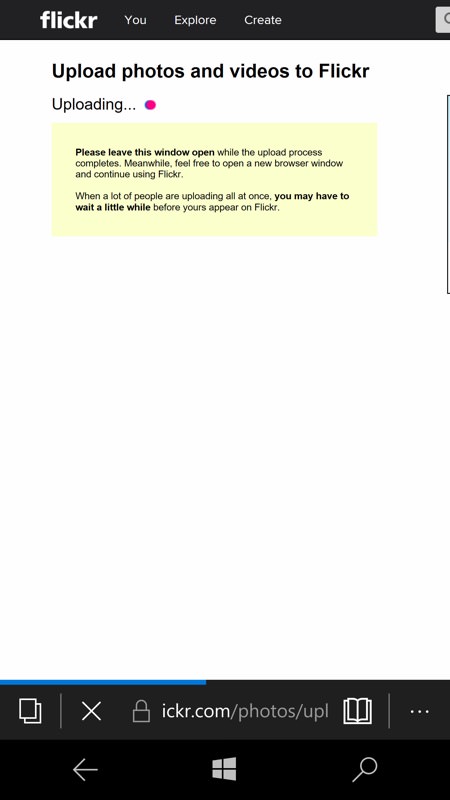 Tap on 'Upload' when you've picked the right image (or images, this being a 'multi' uploader!) and if you're quick then you'll see the uploading screen on the right - though with modern connection speeds, it'll only be for a few seconds... 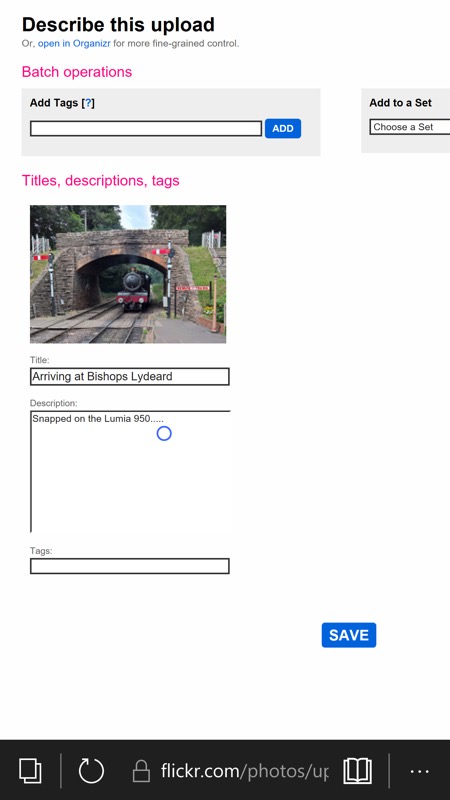 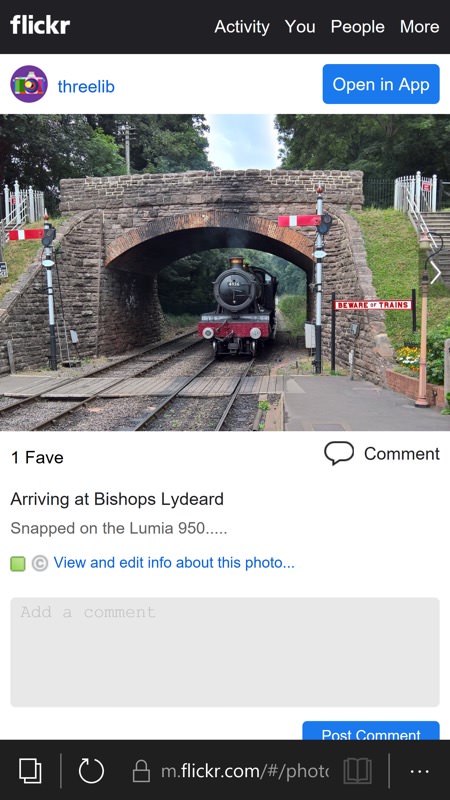 There's then a sparse-ish form to fill out, with title, description.... and tags and choice of Flickr sets (if you use these). It's slightly fiddly to tap and type, but at least multifarious layers of javascript don't get in the way of the entry process, as happens on the full 'modern' uploader; (right) after hitting 'Save' you'll may be turfed back to the mobile site - I know I was. Still, you'll at least be shown confirmation of your new photo on Flickr, complete with title, etc. 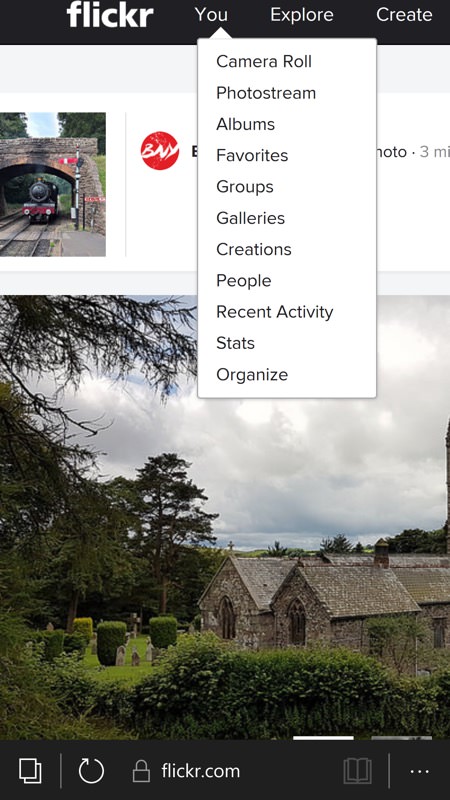 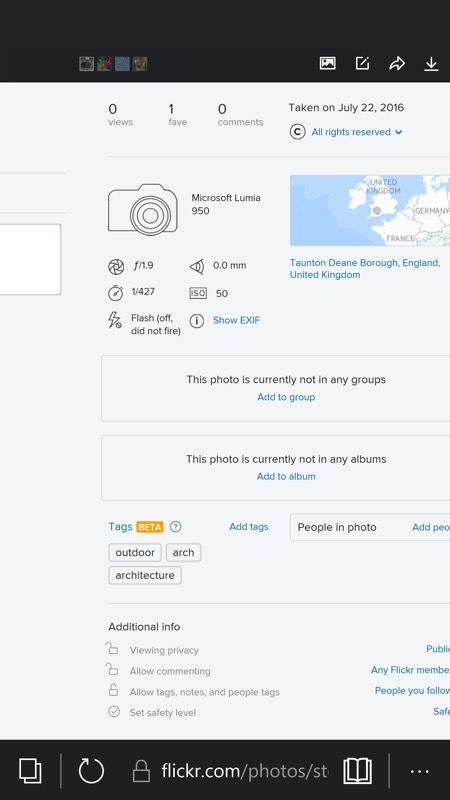 To get your new photo into a group (that you're already joined to), head back flickr.com from the URL bar and your new preference for the 'desktop view' will give you the desktop site and its drop-downs; (right) from the Photostream, pick your latest photo and hopefully you'll see the full desktop view of the image and all its attributes and data. Including a small pane and link 'Add to group'... 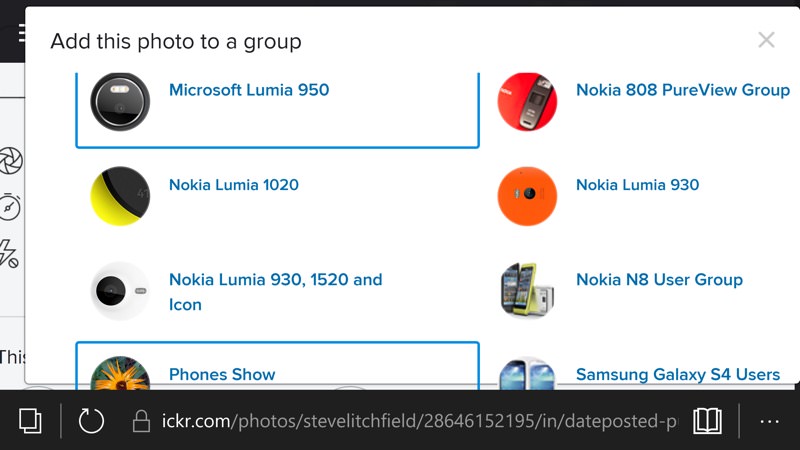 Tap this link and a grid of your joined groups will be available, just tap the ones you want the photo to be in - I've rotated to landscape mode here to make sure that all my 8 or so groups are available on-screen for tapping, and also to be able to more easily pan the page to find the 'Done' button! 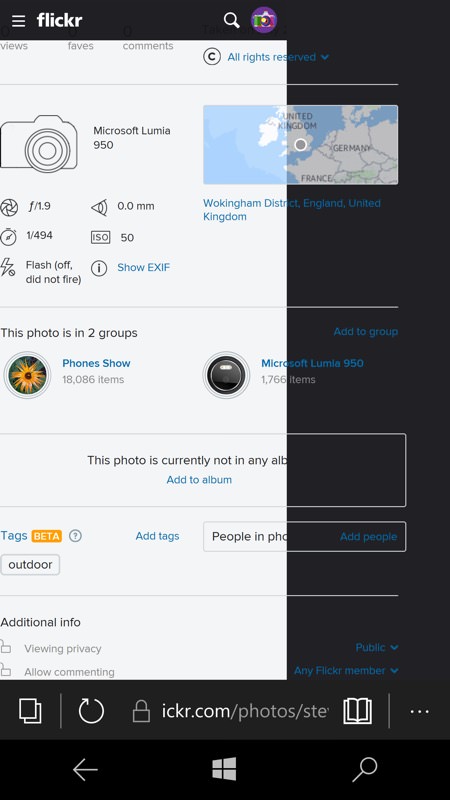 And there we go - horrendous page rendering (it's really not Edge's fault, it's simply terribly convoluted coding by the Flickr web team in my opinion) but at least it confirms that my photo is in the two groups I selected.

Phew. That's a pretty tortuous set of steps to get a photo into a couple of Flickr groups in 2016. Mind you, actually accomplishing the above only takes a few seconds once you know what to do - it's not the extra time taken that's really the issue, it's the sheer inelegance of it all.

But what choice do I/we have? I've suggested the idea of a Flickr UWP to a friendly developer, but would welcome input from anyone else who can improve the current Flickr-less app situation.

PS. Of course, Flickr's very future is in doubt given the chain of takeovers - what other photo hosts do others here use that allow full resolution upload and download? Just curious!