I routinely carry two smartphones, partly because I'm a geek,and partly because I have a work and a personal SIM. These are usually in devices on two different smartphone OS: Windows 10 Mobile and Android, though the actual devices vary from week to week. And, when driving, I've found that real time traffic in the appropriate Maps applications is a real differentiator. For Android... Ahem. Definitely more work to do for Microsoft's programmers.

Now, you'll say at this point that the old HERE Drive+ application on Windows Phone 8.1 was traffic aware, but it only took traffic into account at the time of the initial route calculation. Which indeed seems to be what happens with Windows 10 Maps. Perhaps unsurprisingly, given that much of the latter's code was based on the former, though Windows 10 Maps does at least break out the 'live' traffic conditions graphically, i.e. you can browse around the country and spot slow and stationary traffic, at least on major roads (e.g. motorways and A roads in the UK).

Now, I realise that there are many more uses for a mapping application on a smartphone than car navigation, i.e. when driving, but this is still possibly the most common use for something like Windows 10 Maps, so it needs to be taken seriously. The two issues are:

Both the above issues are entirely understandable from Microsoft's point of view. Routing and traffic awareness is kept as simple as possible in order to simplify the application's code and (possibly) to reduce mobile bandwidth when on the road. But the experience from the user's point of view, using the smartphone as a sat-nav to get from A to B in a car: 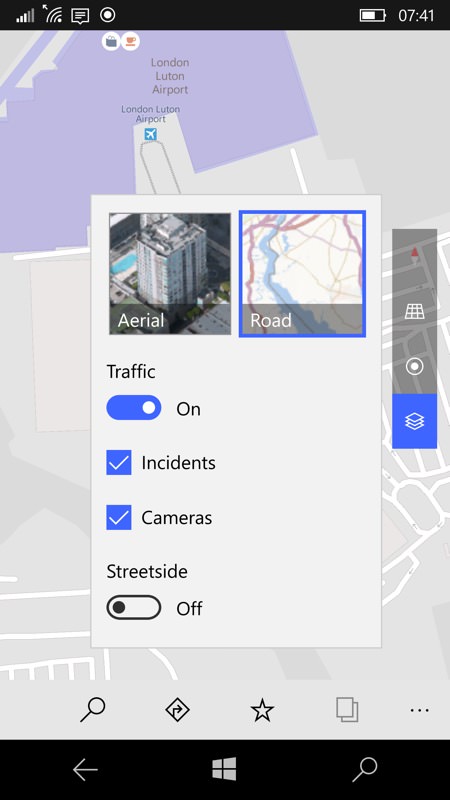 Traffic is effectively just a layer in Windows 10 Maps - turn it on with the layers panel and control, as here... 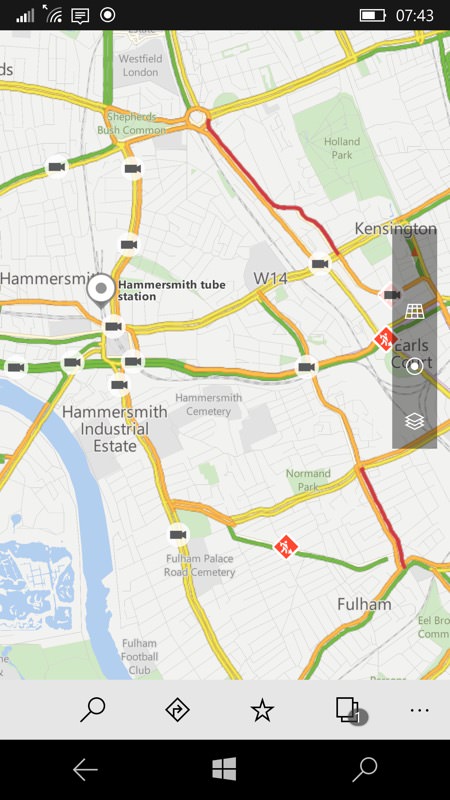 For major roads (here in Greater London) it all works pretty well, at least for initial routing calculations... And the cameras are a lovely touch. 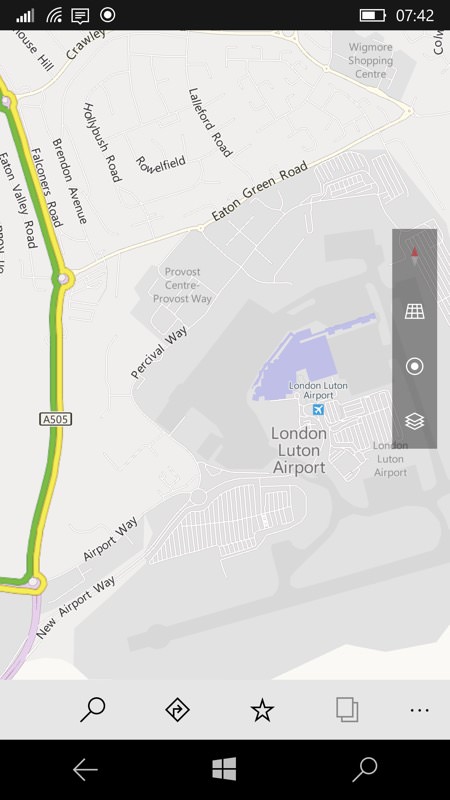 But then you start using Windows 10 Maps in the real world. In this example, you'd think it was an easy run into Luton Airport. However, Airport Way and the run in to the drop-off point was actually chock-a-block with traffic that wasn't going very fast at all. It's just that Windows 10 Maps didn't have this information from its sources. Now look at the same problem area but even more zoomed in, in Google Maps: 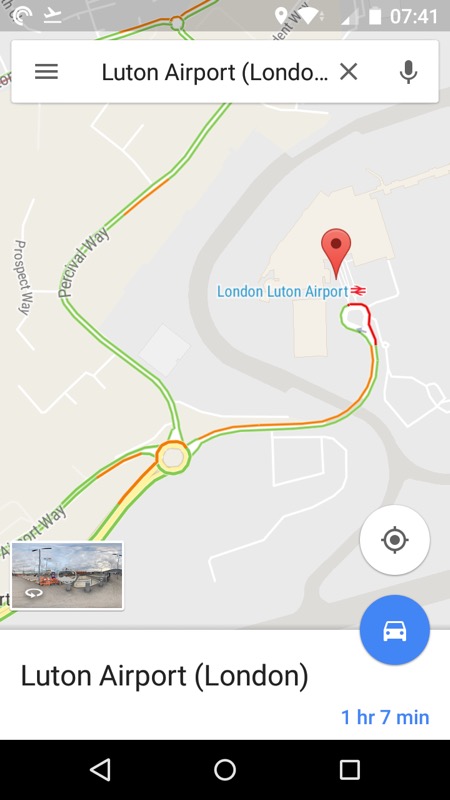 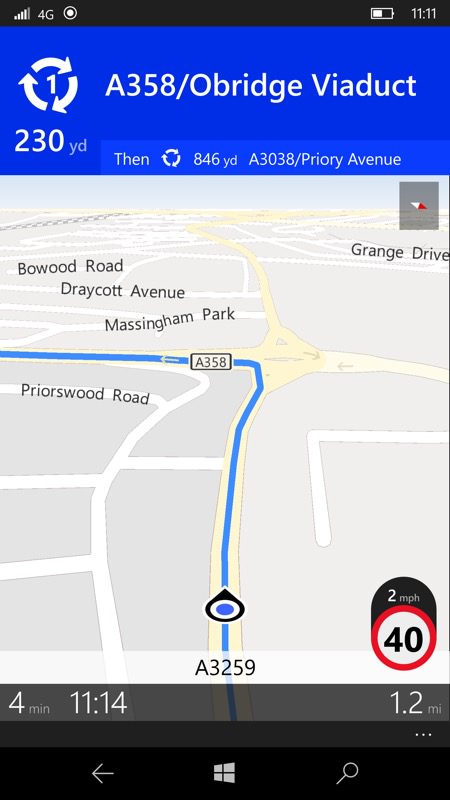 Another example from my own travels. Here I'm sitting in near stationary traffic (2mph shown here) and facing about a 5 minute wait to the roundabout. Yet there's zero awareness of all this in Windows 10 Maps. More data, more intelligence, both needed, if it's to compete.

However, there's competition. And I don't mean from the best and most expensive standalone sat-nav units - I'm talking competition from any old Android handset, from budget to flagship, they all now include the latest Google Maps. What makes this vastly superior to Windows 10 Maps for driving use? Following the two bullet points above: 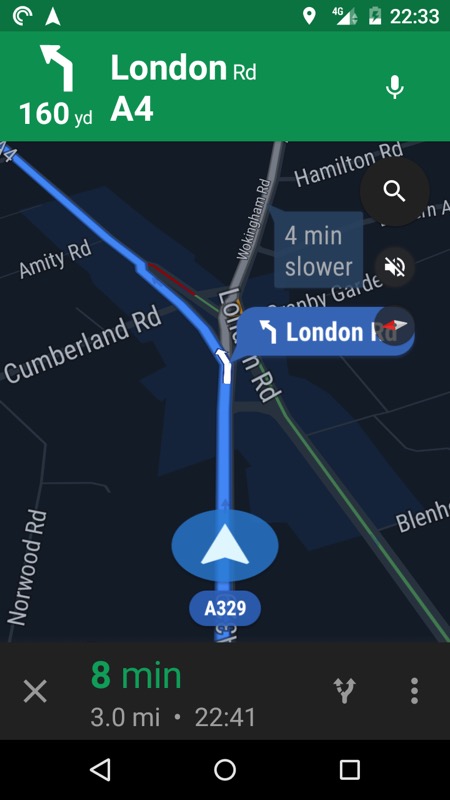 At night yesterday in Google Maps at Cemetery Junction, answering the perennial question of whether I go left up towards the A329M or right up the old A329. So it's 4 minutes slower to go right to get home...

Is this just me griping about Google Maps being better than Windows 10 Maps for this one use case? Well yes, but I don't think it's unreasonable for Microsoft's programmers to improve Maps with regard to updating the traffic model and dynamically changing routes if need be. I recognise that there's unlikely to be enough cars on the road in any country to produce real time crowd-sourced data, and there's no Waze integration, but at the very least Maps should use the traffic data it does know about more intelligently.

On a short 20 minute commute (say), the official traffic state isn't going to change much during the journey, but on a longer cross-country trek of a few hours (typically spanning several motorways), to have the various road conditions factored in, in real time, would be a huge help and one less reason to eye up that budget Android smartphone in the corner...

Microsoft, this would seem an involved but eminently do-able bit of coding. Pretty please? And while you're at it, have a chat with your pals in local highways agencies - it can't just be Google that has the really detailed traffic, surely?