We hear a lot about Windows Phone and then Windows 10 Mobile having 'an app gap', but this glib phrase, often tied into the apparent failure of the OS commercially, doesn't really tell the whole story. With examples below, I explore when it does and - interestingly - when it doesn't apply...

The concept of the 'app gap' continues to fascinate me. On the one hand, I have direct experience of iPhones and Android handsets and, even though the grass isn't always greener on the other side, at least almost everything has an 'app'. Every shop, every service, every transit system, every bank, and so on. You almost don't have to think about it - type in whatever you want to use into the relevant 'app store' and up will pop something helpful.

Even if it's only a wrapper around what is essentially the shop/bank/service's (HTML5) web site. It's interesting because if you watch how people use their Windows, Mac and Chrome laptops, whatever they want to do starts with them typing a URL into their favourite web browser (usually Chrome). The web is the access point to almost everything, whereas on phones it's usually accepted that 'apps' are the way in. Which is a little odd and you, of course, then have tablets and hybrids, on which a mix of 'apps' and browser use are common.

I've championed using the browser model on phones even as far back as 2010, with There's a bookmark for that! and various follow-ups. Why install applications all over the place when your on-device browser already has the power to do whatever you want to do?

Of course, this doesn't tell the whole story and there are extra factors involved. The rise in biometrics and applications which support these systems. So, a fingerprint to get into a password manager, for example. Plus there are services/apps for which no web interface exists, e.g. Snapchat. So 'use the web' isn't a cure-all by any means.

However, and coming to the point of the article, quoting the 'app gap' phrase in the context of banks, shops and other online companies isn't really true. I've been saying for a while that you don't need wrapped HTML5 'apps' when you can just use the Edge browser (and also pin the site so the Start screen if required). I've sensed a little scepticism when I've claimed this, but some example screens sent in by a New Zealand-based AAWP reader prompted me to do some more examples of my own.

True, the Edge experience isn't quite as slick as from a dedicated application, but it's arguably over 90% 'there' and without any installations or other requirements.

On to the examples then, all presented in Microsoft Edge under Window 10 Mobile, and with personal information redacted where applicable(!)

My NZ contact says: "In the past I had pinned to my Lumia 950 XL Start screen my account web page of my local electricity provider, Genesis Energy. The experience was never smooth, but recently they totally overhauled their web site. Now the web experience has become so rich that it is even better than their Android app which is there on my spare phone. The latter is now redundant." 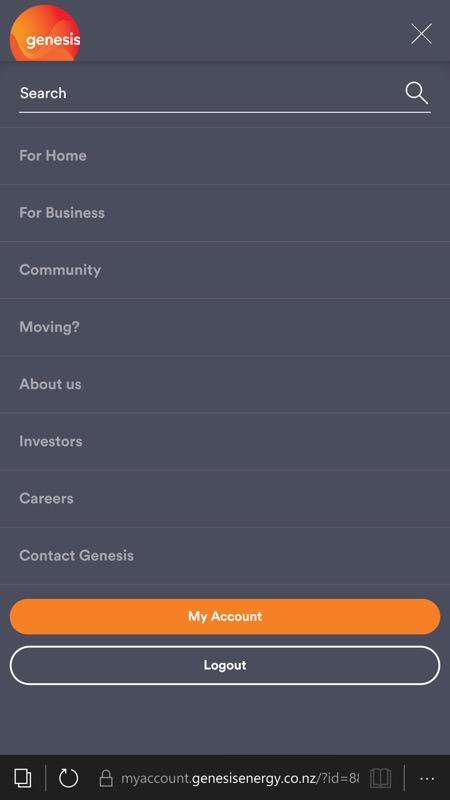 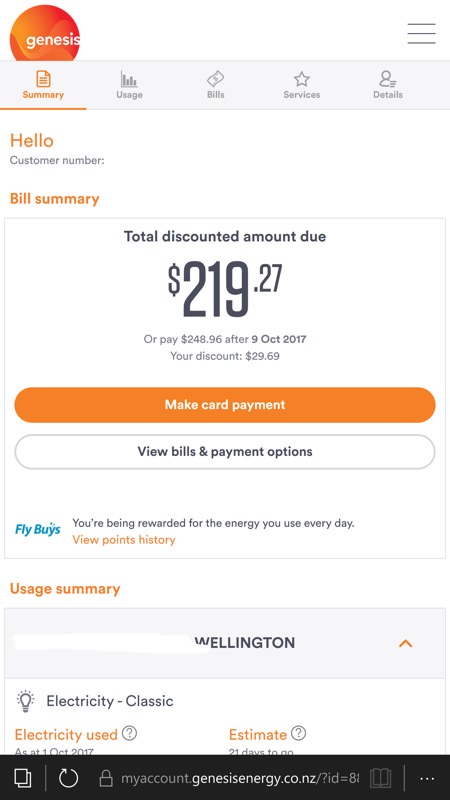 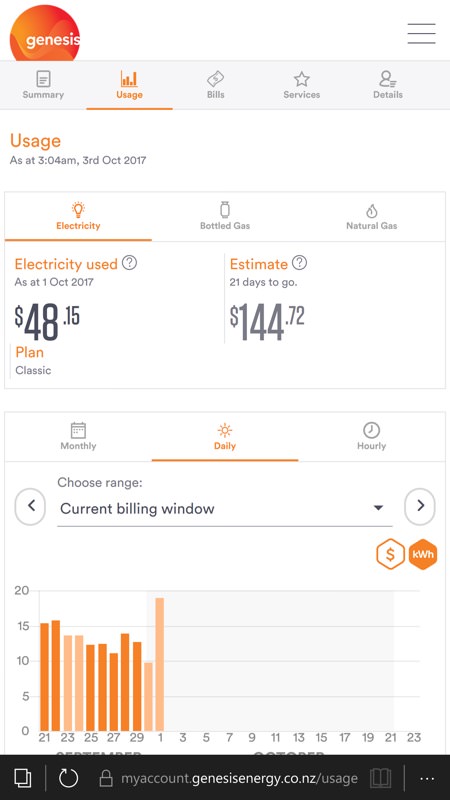 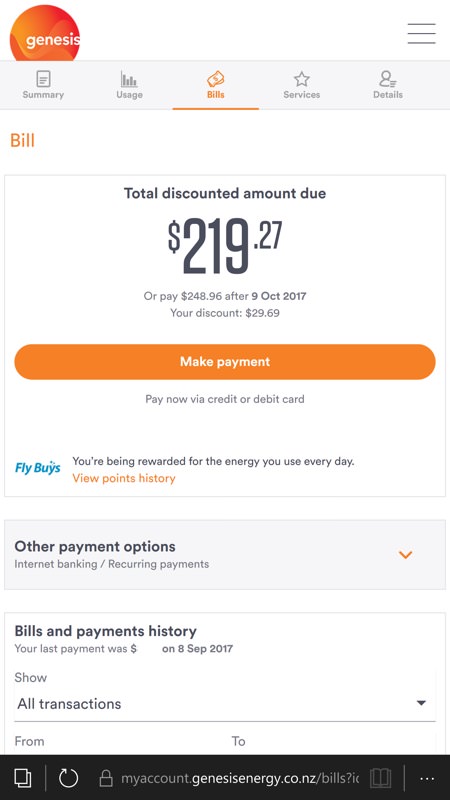 Delving into usage, with charts, and then (right) bill payment. 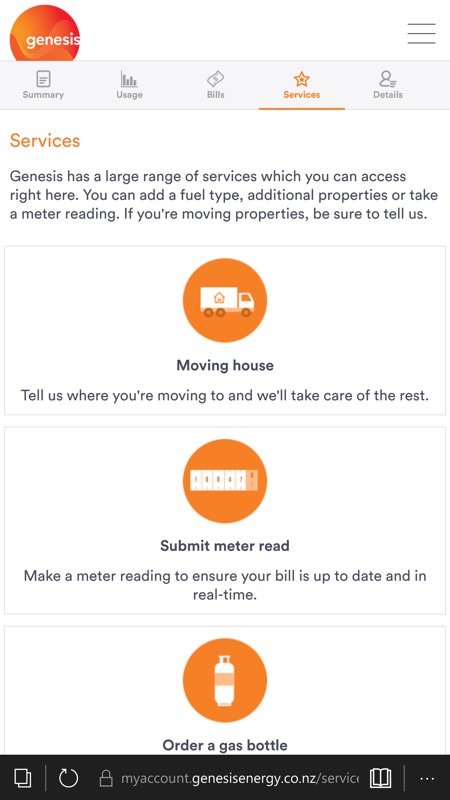 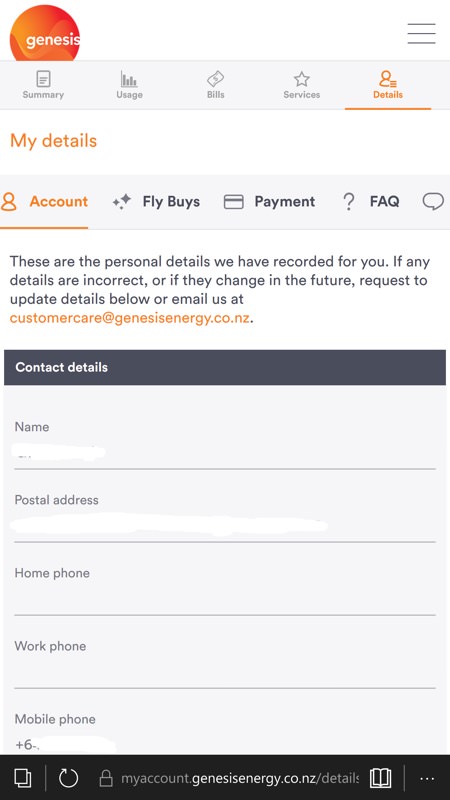 Services and (redacted) details, if it wasn't for the dark themed URL bar at the bottom, you might indeed think this was part of a dedicated, purpose-coded 'app'.

A good example then. And it got me thinking about the few things that I can't do in an 'app' on my own Lumia 950 XL. I could only think of two (ok, ok, three if you count not being able to pay for things with my Lumia via NFC, but then I can't do this on any of my Android phones either - long story - so I'm discounting this one for now!)

I've been with Lloyds for decades and have watched their online services grow and grow. Today, their mobile-friendly HTML5 web site can do everything that you could achieve on a desktop-class screen and browser: 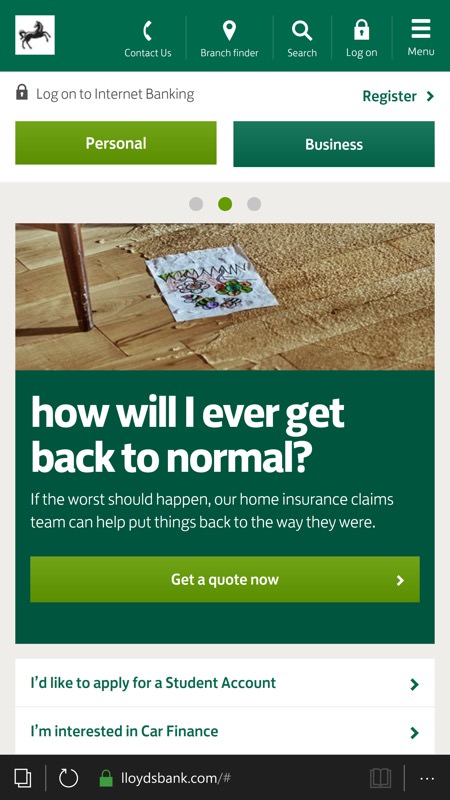 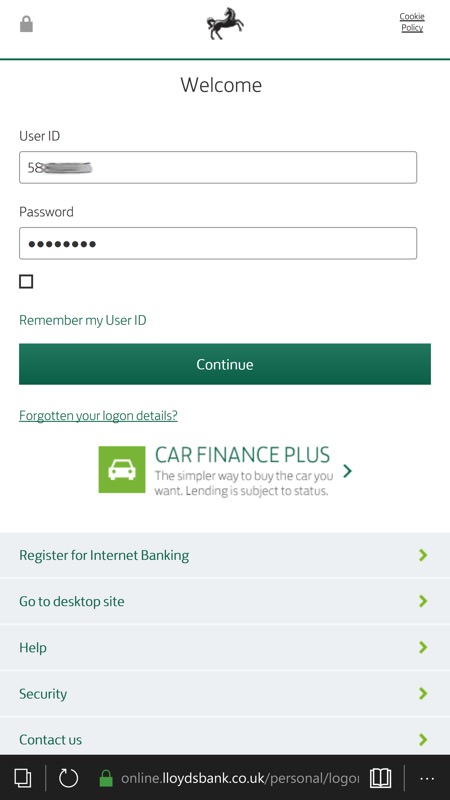 Again, a clear layout and the standard does seem to be hamburger menus top right on the web - for some reason I can't fathom! Anyway, another clear web layout on the phone screen here. 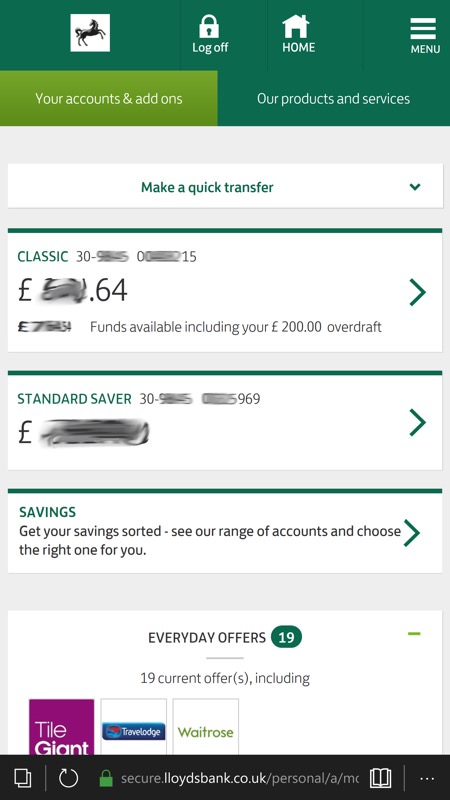 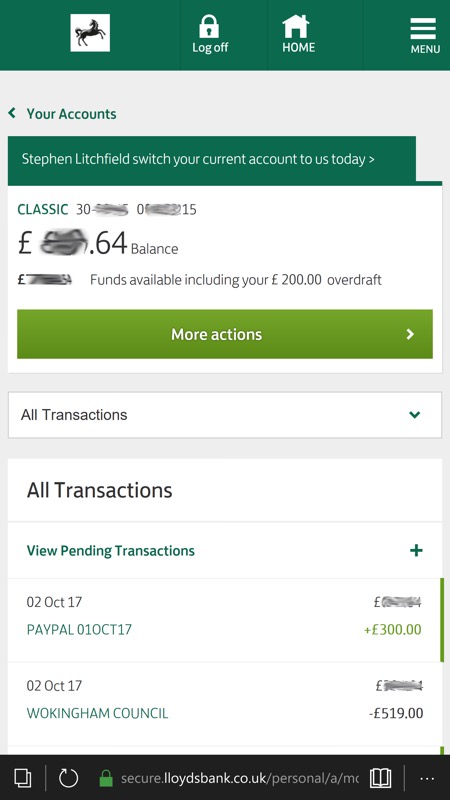 Into my bank accounts then, diving into one of them to see transactions. 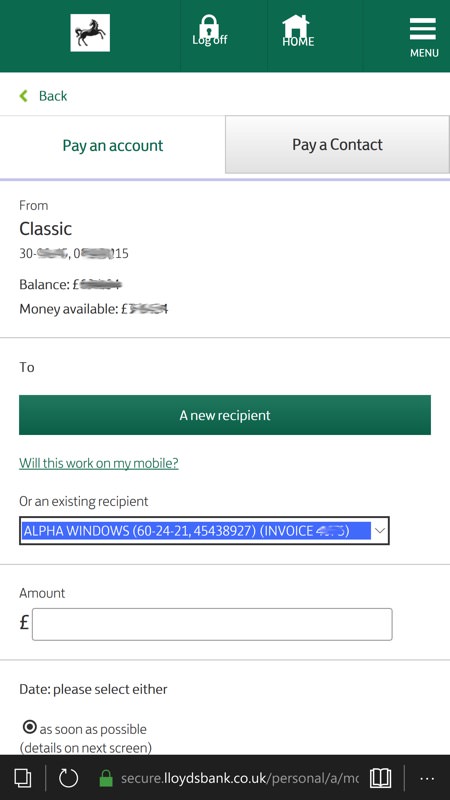 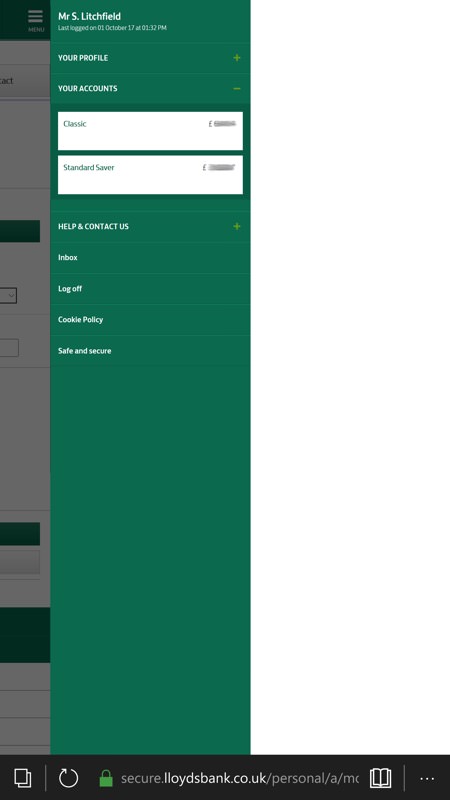 Tapping 'More actions', I'm into payments, with a server-side record of all the companies I've ever paid; (right) the only mis-step here is that the hamburger menu comes up in a crazily small font. Oh well...

Apart from the odd cosmetic slip-up, the Lloyds web site on my Lumia 950 XL behaves exactly as their application does on Android. It doesn't even take longer to log in, since my customer number and password are remembered by Edge and since the 'memorable phrase' challenge is present on both web and application.

On then to my final example, the only other service for which I have to use the web rather than a dedicated application... 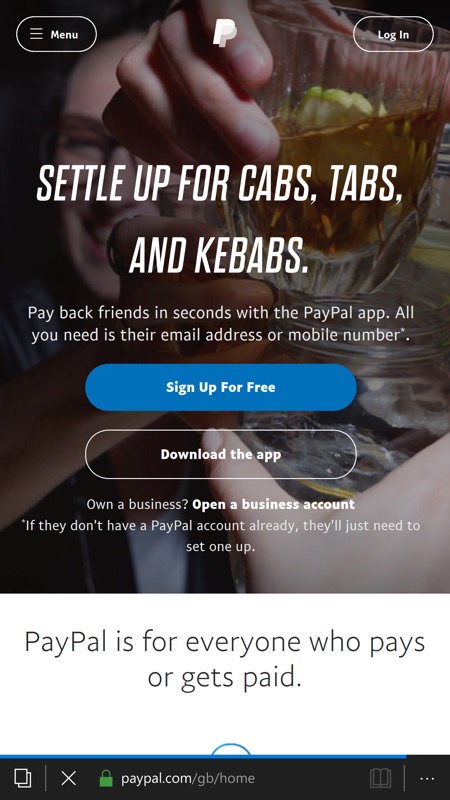 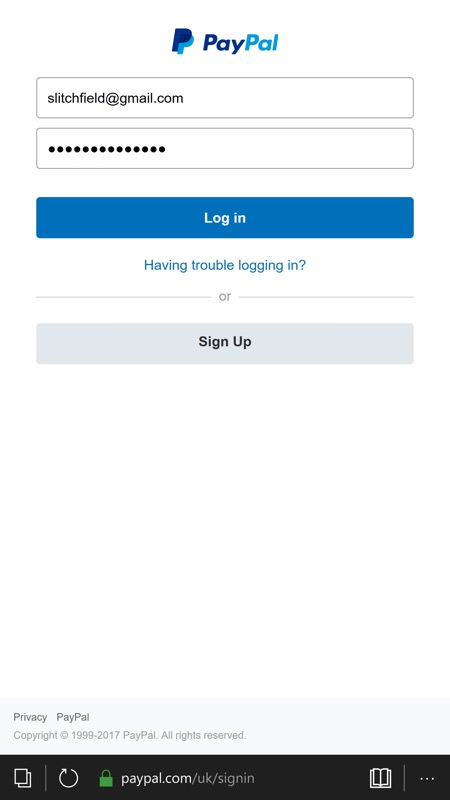 A common annoyance is that web sites prominently display 'Download the app' controls. In this case, it does actually go to the old PayPal WP8.1 application in the Store, though this no longer works. Anyway, ignore it and tap on 'Log In' instead, top right; (right) Edge remembers my login details, as usual, thankfully. 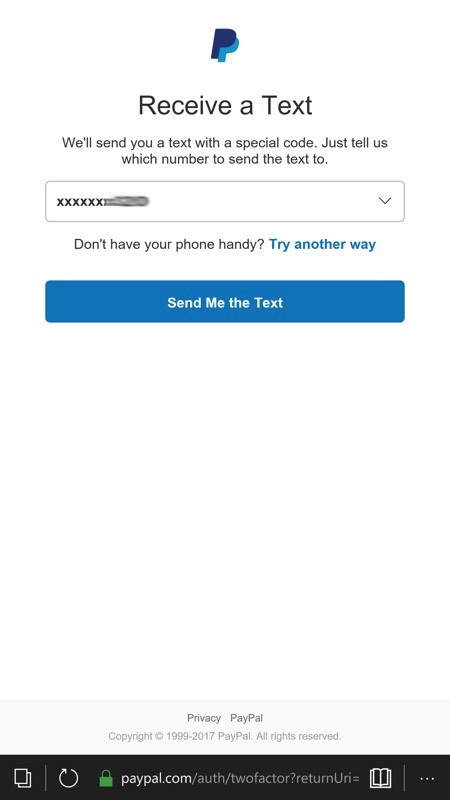 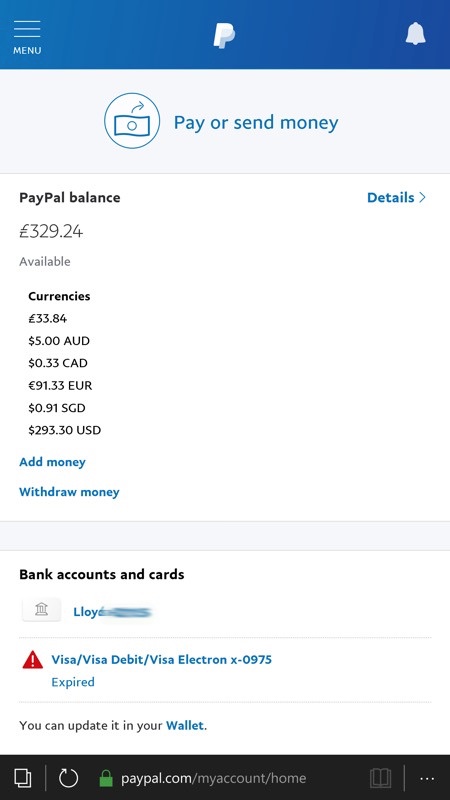 As with Lloyds above, the two factor challenge is present - in this case via SMS - though, oddly, it's present in PayPal's Android app too, even after fingerprint identification. Which is bizarre, but does mean that, yet again, the login experience under Edge is no longer than in a dedicated app on another platform; (right) into my vast multi-currency 'wealth' in PayPal - I jest! The layout and functions mirror those in the application on Android or iOS though. Note the hamburger menu is top left here. 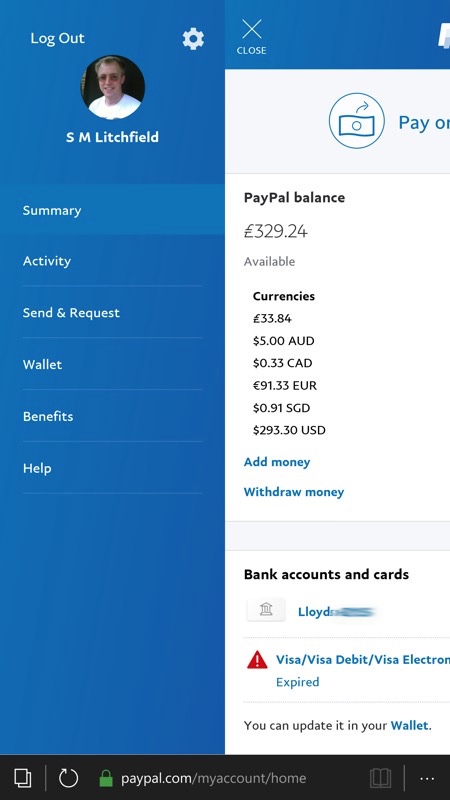 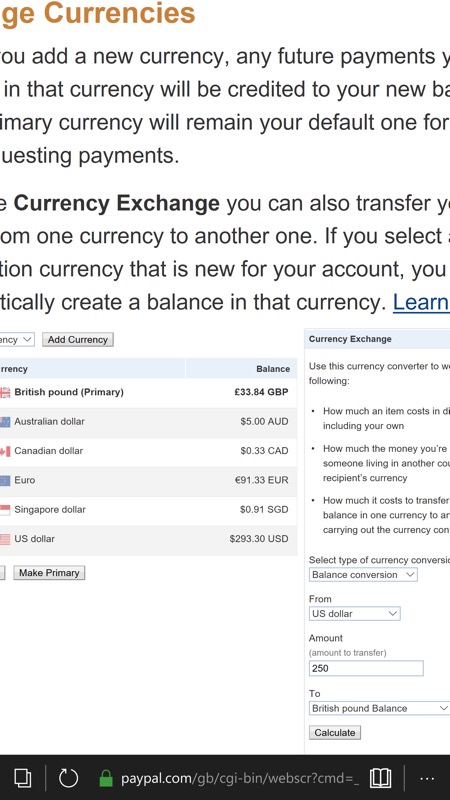 On the hamburger menu and nicely formatted this time round, a very application-like slide out pane; (right) managing currencies is a good example of a transaction which is perfectly possible under Edge on the phone but where the formatting is optimised for a wider display, so you either have to have great eyesight or do a little panning and zooming to see what's going on. Oh well.

As you'll have seen above, there are some cosmetic and usability issues with these sites and services under Edge, but they really are no more than minor. In each case it's possible to (e.g.) pay bills, transfer money and generally get stuff done, often no slower than when using a dedicated application.

As I mention above, there are other reasons for needing extra applications, e.g. biometrics, non-availability of a web version, but I still thought a shout out to Edge and modern web sites was in order - it's not all doom and gloom in the Windows ecosystem!

Obviously, the exact services and sites that you need to access from your phone will vary enormously from person to person and according to country. So... I'd wekcome your data points on banks, shops and services, accessed via Edge under Windows 10 Mobile. Any heros? Any showstoppers?