My response to any oddity in the operation of a Windows 10 Mobile phone is usually to suggest a 'refresh'. The usual cause of the oddity is that the phone has been taken through multiple OS branches and/or Insider rings, and it's time to have a managed clearout. In the FAQ below, I cover most of your questions about backing up and refreshing.

If I do the 'Refresh' procedure (detailed here, typically), how much will I 'lose'?

If done properly, nothing. The backup procedure in Windows 10, tied to your Microsoft account, is now so good that even call history, text messaging, and most built-in and third party application data is now handled. Even down to offline maps, Start screen layout, email accounts and preferences. The works. If I had to put a number to it, I'd say that 99% of your 'stuff' will be just where you left it.

The 1%? There will always be something, of course. In my screenshotted examples below, I was left with one solitary small Start screen gap and eventually it turned out that the Films & TV app had failed to be pinned again. Which took all of 10 seconds to fix. Plus, in some - but definitely not all - applications, I had to authenticate again with the appropriate service. Games are probably the biggest kicker, since they rarely obey platform rules about letting their data be backed up, so any game progress may be lost - it usually depends on the title and whether it's independently cloud-synced.

Overall though, I was blown away by how much is returned, safe and well. For the only real caveat, see the next question!

How long will restoring from a backup take?

Ah. It's not quick, as you might expect if you have any experience with Windows 10 updates on a PC or phone and if you've ever watched as 50 application updates crawl through in the Microsoft Store. In my test case, using the fastest Windows 10 Mobile phone in the world, the Alcatel IDOL 4 Pro, with Snapdragon 820 chipset and 4GB RAM, the basic restore from the backup (data and third party applications, mainly), followed by an extra check in the Store and then around 30 first party (Microsoft) application updates, all took about an hour to chug through.

In fairness, restoring any smartphone running iOS or Android would take at least half this time, plus in the latter case there would be a lot more still to do when it was done. But do allow time and be patient when the phone restarts, as there's a lot of background syncing and Store installations and general 'settling' that has to be done in the first hour or two. Don't worry, the experience will be much faster once everything's in place.

When do backups happen and how do I stop the auto-backup on the freshly reset phone from over-writing my last 'good' backup?

You don't have to worry. If you use the 'Back up now' function in 'Settings/Updates & Security/Backup/Backup options' (as advised in our step-by-step) then this 'explicit' backup will be listed in the possible restore points when you start setting up the phone (or a new device of course), in addition to any auto-backups done since the reset. In my test case, there was an enforced two week gap between the reset and the restore (long story) and both a recent (small) backup of the phone and my original 'Back up now' data set from before the reset were there, so you shouldn't see any confusion.

Certainly not in a standard 'backup then wipe and restore' scenario. The auto-backups only seem to happen weekly or so, so in most cases you'll only have one restore point and it'll be the right one.

I have a lot of data/apps/stuff. Do my backups count against my OneDrive allowance and should I worry about running out of space?

This was all covered in our separate Backups FAQ here, but the short answer is no, they don't count. So however much you have crammed into your smartphone (potentially 64GB of stuff in an IDOL 4 Pro) and however close to the limit you are on OneDrive then you won't have a problem.

How often should I consider doing a 'Refresh' of my Windows 10 Mobile smartphone?

As with Windows 10 on a laptop or similar, this shouldn't really be a regular activity, no matter what some tech-fans might recommend. With any computing device, make sure you don't ever get close to filling its internal/system storage device (they hate that!) and you're good to go.

Having said that, if things simply aren't working on your phone and it's a problem that no one else seems to have then maybe something is wrong 'under the hood' - hey, modern smartphones are as complex in terms of software as any other computer and files and settings can get scrambled and corrupted. More commonly, it's because your phone has been upgraded through different OS branches and there's 'detritus' hanging around and causing issues. Either way, a spring clean is something that most of us have to face at one point or another.

On a desktop of laptop, maybe every few years, but on a phone this might be once a year - we use our phones more often, treat them more harshly, and expect far faster response.

In terms of the reset, should I use WDRT?

WDRT being the Windows Device Recovery Tool. No, you don't normally need to go near this, it's strictly a last resort for when your device is completely out of step with the rest of the world - for example if you were on an Insiders programe and have been left high and dry on an unsupported build. But with almost all Windows 10 Mobile users now free of the defunct Insiders programme (for Mobile), these days a standard reset in 'Settings/System/About' is perfectly sufficient. You'll be 'factory fresh' in terms of OS (on your current branch/build) and storage and can proceed as per the links and suggestions on these pages. 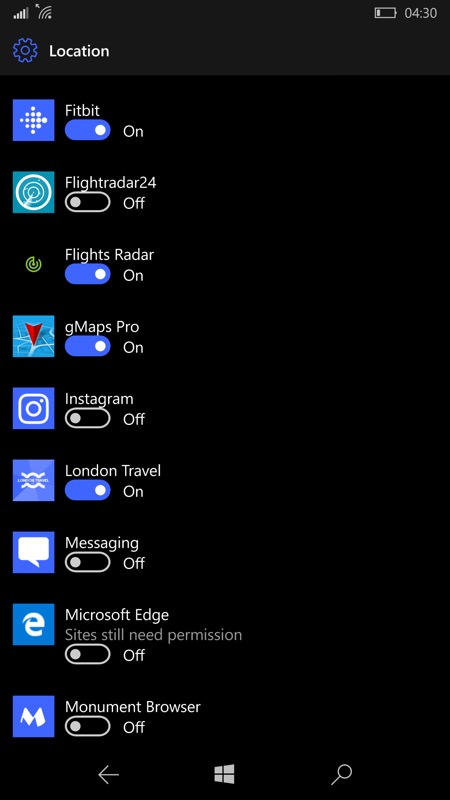 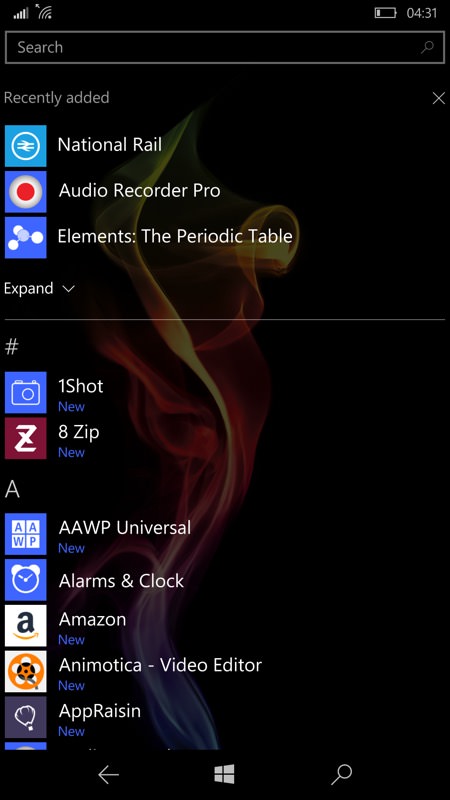 After a reset, there aren't many things you'll need to change in Settings, but location permissions is one of them. The first time an app wants to access location you'll be shunted off here and, while here, it's worth running down the (reinstalled) app list and granting permissions in one go, to save time later; (right) after the restore has finished, all your third party apps should be in place (marked as 'New'!) - even your 'Recently added' apps are remembered and listed! 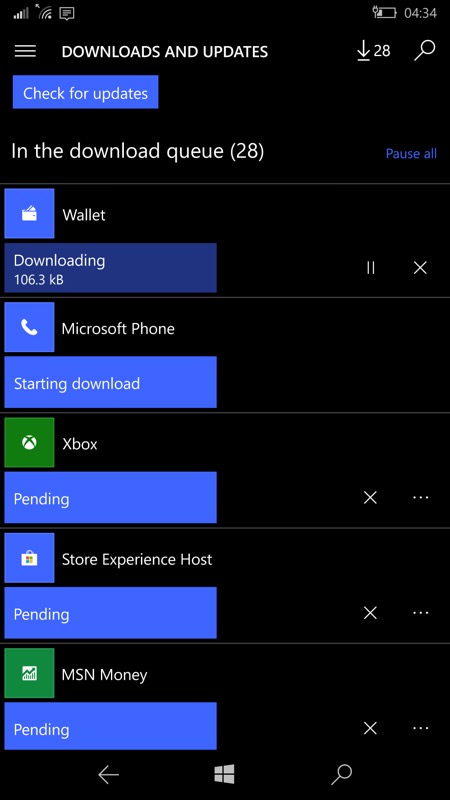 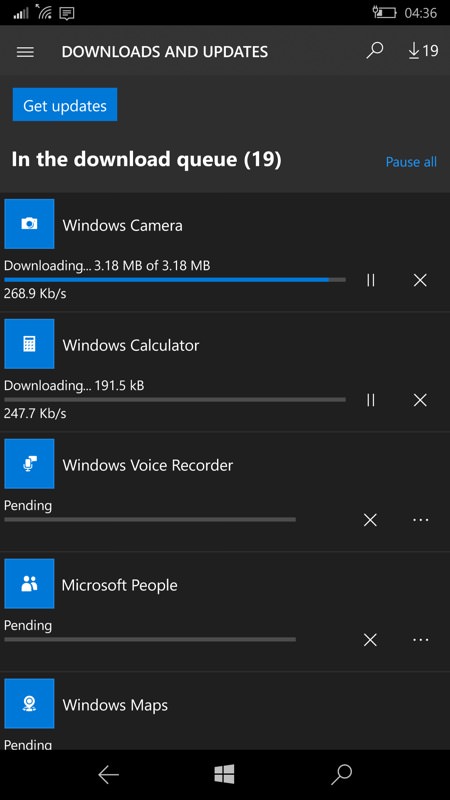 All the built-in Microsoft applications will initially be on the versions that shipped with the OS branch/image, so going into the Store for the first time after the main restore has finished will result in another few minutes while these all update. Note that, in typical brand-dead fashion, the Store itself needs updating but it's not clever enough to do itself first or last. So you'll probably have to kick the Store off again manually at the appropriate point. Notice the styling changes from the Store version that shipped with (here) Fall Creators Update and the latest client, by the way. 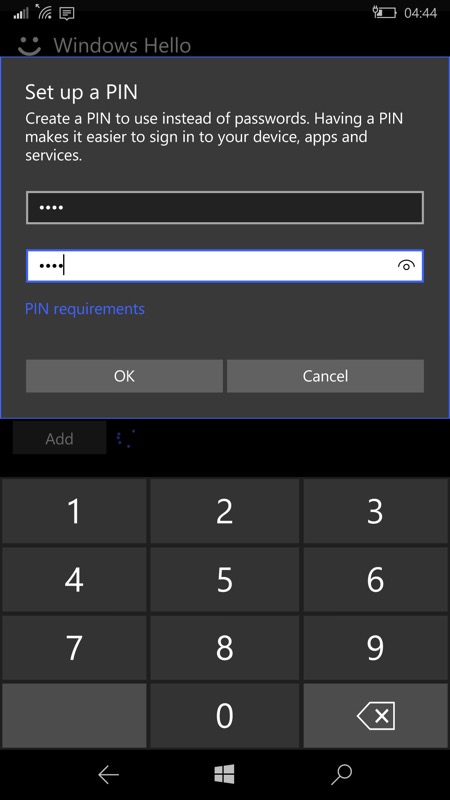 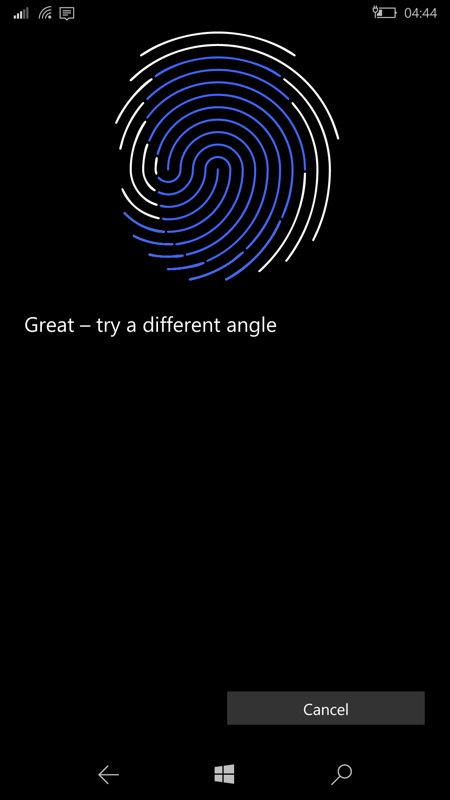 Something else that obviously has to be done is establishing new biometrics - so you'll need to put your fingerprint in all over again, along with a backup PIN. Or your eye iris patterns, if you have a Lumia 950 or 950 XL. 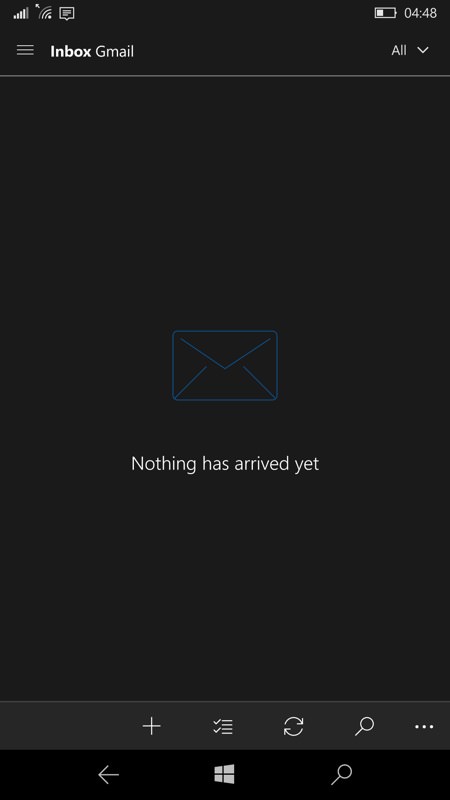 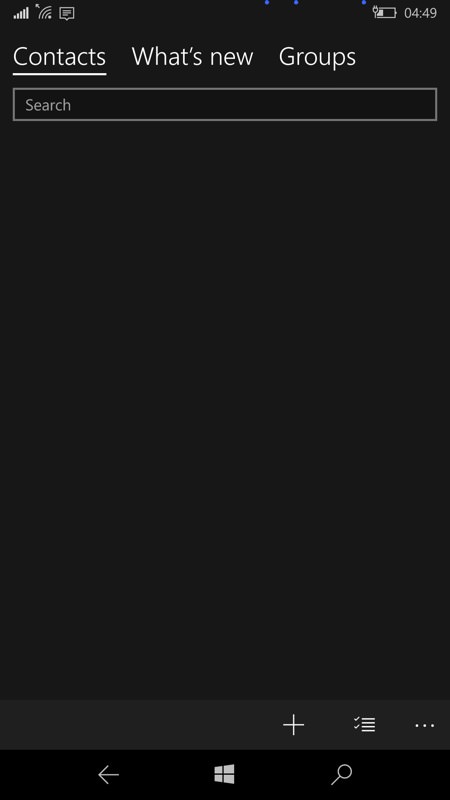 I emphasise above that patience is a virtue. This applies not just to applications installing, but to data syncing. Here's a good example - with both Microsoft and Google accounts set up, my Outlook email inboxes and contacts lists were empty for a good 15 minutes, as shown above. But in true Dad's Army fashion, don't panic - just wait and everything will sync in due course. I promise. 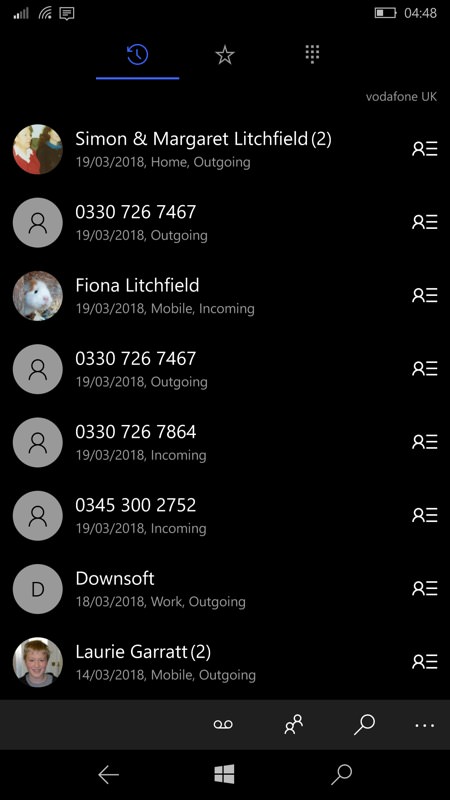 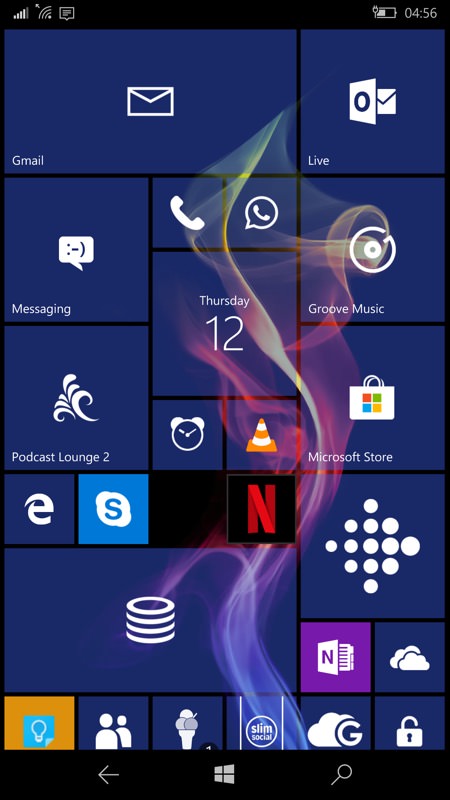 Even your call history is restored, along with text messages and much more; (right) your Start screen should be back as it was - in my case missing just one small tile in the middle. Which I worked out was easy to put back once I'd figured out which app was 'missing'! Don't worry that the files don't animate and show data immediately - as with PIM and email sync, some of this relies on background tasks and will take a few tens of minutes to fully get going. 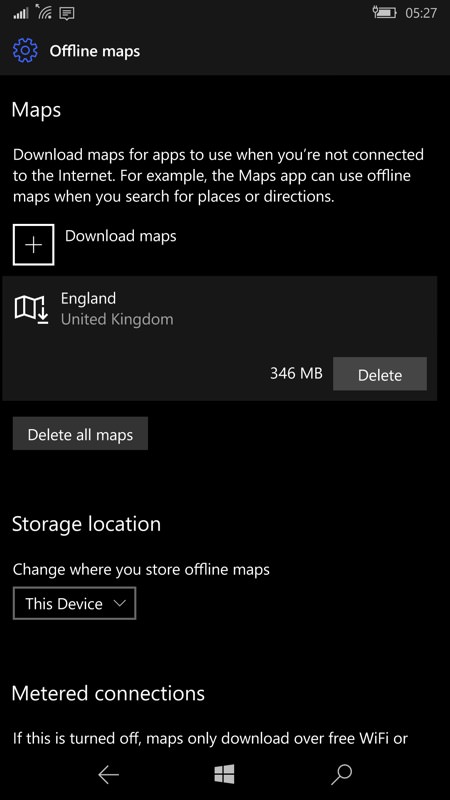 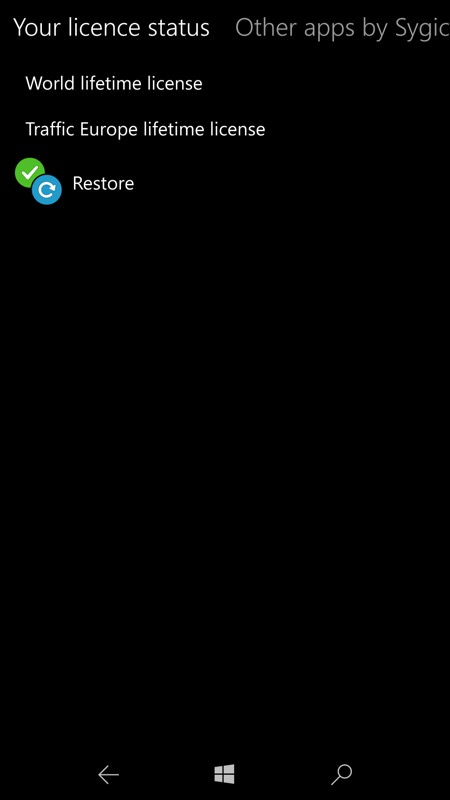 Proof that application data is also restored perfectly these days - here showing that Windows 10 Maps' offline maps are present and correct without having to go off and grab them again; (right) ditto Sygic Navigation, the Windows 10 restore process even put me back fully signed in and with license status in place. Impressive.