Where are my backups, how do I manage them, and are they counting against me?

Having recently had quite a bit of experience of restoring Windows Phone backups to devices after resets and upgrades, I thought I'd answer a few Frequently Asked Questions about this boring but surprisingly important subject. If all goes well, you can - in theory - restore the set-up of one Windows Phone 8.1 or 10 device to any other. With some caveats, of course!

Do my backups count against my OneDrive allowance?

As part of the initial set-up of any Windows Phone 8.1 or Windows 10 Mobile device, you're asked whether it's OK to have your information backed up to OneDrive - the wording varies according to version, but the question's essentially the same, and the right answer is - of course - 'yes'. Just go with the defaults. (Actually, on 8.1 devices, I tweak the settings (/system/photos+camera) later to make sure that high resolution photos get backed up, but that's another topic for another day.)

Now, this raises an immediate red flag for anyone who's been following Microsoft and the news, since you'll then be worried about running out of space on OneDrive. Not least because Windows 10 Mobile - in Settings/Update&Security/Backup/More options - tells you exactly how many GB are used by your backups of that device. However, don't worry, because these device backups - regardless of how many phones you own and/or have backed up automatically - don't count against your stated OneDrive storage allowance. Which is just as well, otherwise we'd all have gone over some time ago! 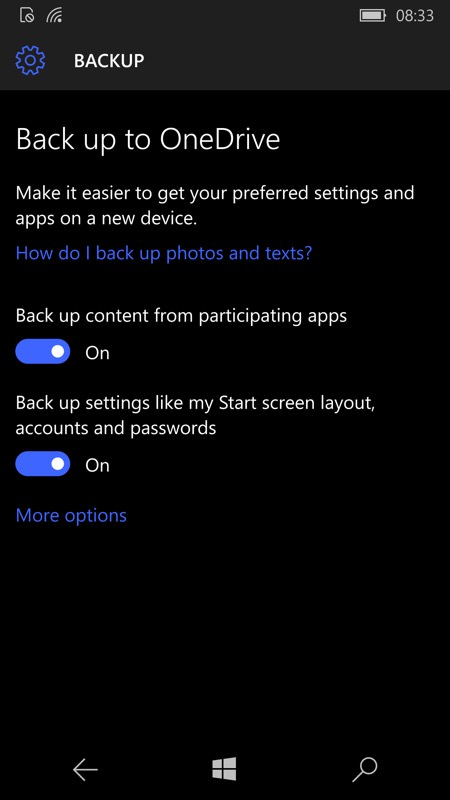 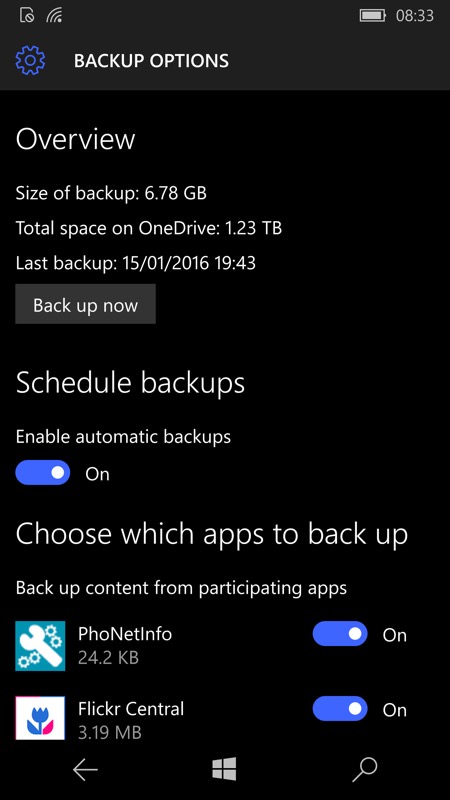 Microsoft makes this more confusing than it should be because the backup size reported in the phone is paired, on-screen, with your OneDrive storage allowance, which has almost nothing to do with the size or number of your backups. These two numbers are decoupled and Microsoft should really include the OneDrive stat in the OneDrive app alone.

Where exactly are my device backups?

Good question. They don't show up in a casual perusal of your OneDrive files and folders in a web browser. The trick, totally untuitively (gah!), is to click on 'Get more storage', a tiny link down at the bottom left of the web window:

This then brings up a summary of how your current OneDrive allowance is made up (mine looks rather huge, thanks to Office 365, though this expires for me in April, so I'm going to lose a Terabyte in a few months time). Look on the left navigation bar, under 'Options', you'll see 'Device backups': 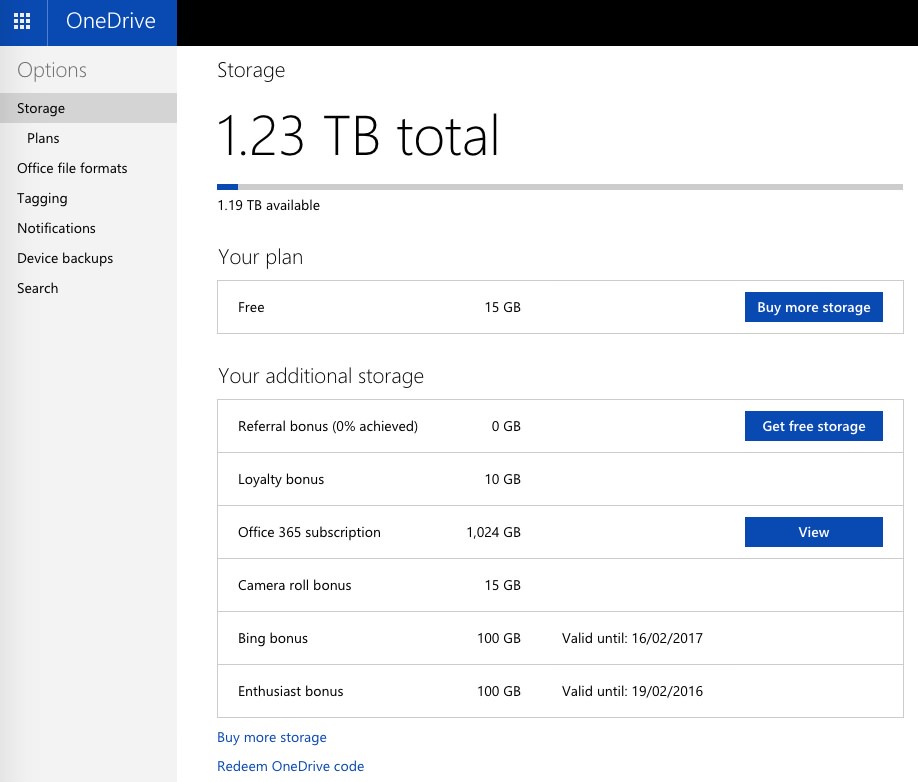 Clicking on 'Device backups' lists each device that you've ever (usually) automatically backed up. My own listing is confused because a) I'm a journalist and have gone through a lot of review phones, and b) I've been lax about naming each one as I've gone along. So if you want to pull a particular tip from this feature, it's that you should head into Settings and give each new Windows Phone or Windows 10 Mobile device a unique name! 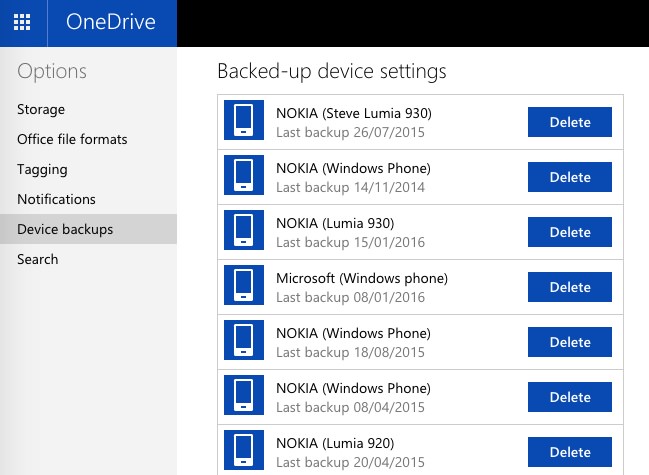 The whole point of backups, of course, is that they can be restored. For example, as part of troubleshooting after a hard reset to fix an issue. Or, for less ambitious users, probably for restoring their data, set-up, apps, and so forth to a brand new phone after a device upgrade.

And, on the whole this system does seem to work. I recently restored my last Insiders Preview backup of my Lumia 930 to a production Lumia 950 and (aside from having to be patient while my 50 or so third party applications installed) all went well - it was as if I was picking up my 'old' phone again. Of course, behind the icons and tiles, many services required re-authorisation (e.g. entering and two-factor-OKing passwords), but that's OK - I appreciate the security. Game states were almost all lost though - not an issue for casual gaming but a real pain for some larger games with career modes. (The bigger and more professional games save state themselves, mind you, e.g. Lara Croft GO.)

It's also worth noting the obvious, that restoring a backup to a totally different device in terms of hardware capabilities may involve some mismatches - specific camera utilities spring to mind, but I'm sure there are other aspects that may invalidate certain apps. Plus restoring a backup from Windows Phone 8.1 to Windows 10 Mobile will probably go OK now but watch out for some third party applications which simply aren't available for the newer OS, at least not yet. As to restoring a backup from Windows 10 Mobile to a newly reverted device running Windows Phone 8.1, that's err... crazy. Just don't go there - the reason for reverting in the first place will probably have been to get away from some issue with a W10M set-up!

So there you go. It's well worth doing/allowing backups, it's well worth checking that they're happening (automatically) correctly, and it's worth noting that none of them count against your ever-more-precious OneDrive allowance. And, although you shouldn't ever need to delete backups manually, if you're at all worried about Microsoft hanging onto your data or remembering a certain device, then you now know how to delete its backup.

Phew. Just remember to give multiple phones multiple names, otherwise you'll be scratching your head as I often do, faced with restoring about a dozen backups marked with just 'Windows Phone'. Digging into the 'RM' variant numbers sometimes helps, but it would be much more helpful to have named my Lumia 830 'Green Monster' and my 1020 'Yellow Snapper' or similar. I'm sure you can be more creative!

Filed: Home > Features > Where are my backups, how do I manage them, and are they counting against me?