Although I regularly pitch the PureView over-sampled Lumia 950 XL stills up against the best of 2018 and 2019, video capture is a whole other area. The Snapdragon 810 chipset in my 950 XL just can't compete in terms of real time noise reduction and software stabilisation with the Snapdragon 855 (and Kirin 980 here), which - at 1080p here, at least - have oodles of headroom in the processing department - and it shows when testing modern Android flagships. Even more so the Lumia 1020-inspired Huawei P30 Pro, which also throws a genuine 5x 'periscope' telephoto into the mix.

NB. I'm not commenting on the whole USA vs Huawei thing and its ramifications on future device and OS updates. That's an editorial for another site for another day. This is AAWP! 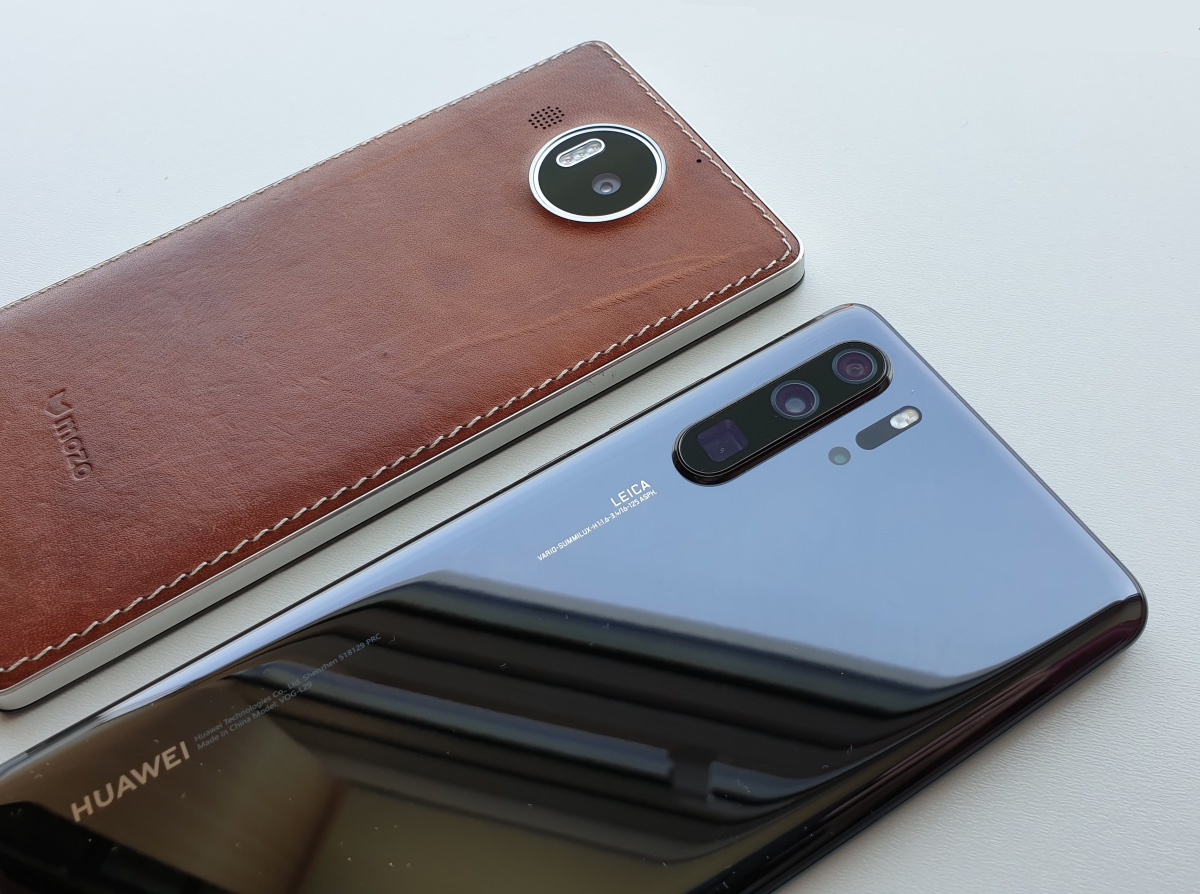 You'll notice all this in the video clip mashup below, shown in my editing in 'split-screen' format, for easier comparison, even though you don't get to see the whole frame in each case. Whereas in the stills world, the Lumia 950/XL (and 1020 before them) were only eclipsed in the last year at most, for video capture they're now at least a couple of years behind the cutting edge in phone cameras. As much as it pains me to admit it.

All the things I used to rightly champion about Lumia video capture, stabilisation, high amplitude stereo recording, lossless zoom, great low light capture - all of these are now matched or exceeded by iPhones and Android phones over about £600 (UK prices). And I don't think we should be sad or outraged about any of this - just aware that technology moves on and that competitors catch up if the market leader stops development.

With Microsoft pulling out of designing more top end Lumias after 2015, the arguable year or so's lead in the market in terms of imaging was cut and then reversed, with the P30 Pro here the current state of the art in both stills and video capture, at least if you value zoom capability, its strong suit. (I'd argue that the Google Pixels are stil right up there for still imaging and the Samsung top end Galaxy phones for video capture.)

Anyway, enough waffle, let's get to the short video montage. As usual, you'll want to click through to YouTube and enlarge to the original 1080p, though do note that full original quality is in each case damaged to some degree by my iMovie rendering and then YouTube's own re-encoding. Ah well, my points are still easy to see on-screen:

Hopefully my audio commentary tells you most of what you need to know, along with your own eyes. The Huawei P30 Pro's video is certainly not perfect, especially in its Achilles Heel zoom area of between 2 and 4.9x, i.e. when relying on PureView-smart cropping into its 40MP sensor and then using interpolative zoom more and more. But it can be forgiven because, if you really, really want to zoom in then the P30 is currently unmatched. Its 10x hybrid zoom is genuinely useful in stills and I've had usable results at 20x or more. In video mode, there's less opportunity for image processing tricks and sticking to 5x zoom is probably best (and appropriate in most settings, I've done lots of tests). But you can push it to 10x zoom or so, as you'll see in the clip above, as long as you accept some artefacts in the video frames and focus hunting every now and then.

The Lumia 950 XL's biggest failings above come in the driving test - I re-did this several times because I couldn't believe how badly it performed. Handheld in low light, it's much better, so I can only assume that something in the vibrations from my car and the way the phone was mounted somehow sent the OIS optics into a state of shock. All very odd, but utterly repeatable.

I'm the world's biggest Lumia imaging fan, but I think this comparison shows just how far the 950 and 950 XL lag the state of the art in video, at least. Your comments welcome, anyway.

PS. I've got a few other comparisons between the Lumia 950 range and the P30 Pro to come, not least a re-test of still imaging once the latter's big '162' firmware update hits, probably in late June 2019.