How to: Fix the 'Office 365 subscription is required' editing warning

This has been mentioned a few times over the last six months - the odd reader would complain that the Office UWP application under Windows 10 Mobile would suddenly start demanding an Office 365 sign-in, when theoretically any device 'with display under 10' should have full creating and editing capability. I have a theory - and a walkthrough for people seeing the titled warning and have qualifying phones or accounts...

First of all, here's what should happen with Windows 10 Mobile, direct from Microsoft:

Why can't I edit some Microsoft Office documents on my phone?

First, make sure you're signed in with a Microsoft account.

Second, you might not be able to edit a Microsoft Office file on your phone, depending on what's in it or how it was last saved.

The phrase "that is associated with a current copy of Office" isn't very clear. How can your account be 'associated' without being signed up for Office 365? It's as clear as mud here, Microsoft, especially in the context of Mobile. Does it mean an account that has been used to install a traditional copy of Office on the Desktop in the past?

However, and it's a big 'however', all of this doesn't appear to be necessarily implemented for:

It's not clear whether these possible exclusions were an oversight by Microsoft or deliberate. Most Windows 10 Mobile users, in practice, will own a Lumia 950 series device, or perhaps a 650, and so won't be affected by any of this, but outside of this 'all Microsoft, all Windows 10' sphere it's well worth noting that you shouldn't expect full editing and creating rights (whatever the FAQ above says). And it's too late now to complain to Microsoft that you've been hard done by, I suspect!

And, equally, it's worth noting the titled nag message, for devices outside Microsoft's core Windows 10 stable but which you're signed in to a valid Microsoft/Office 365 account. In theory, once signed in, you shouldn't be bothered again, but in practice it seems that monthly updates to the OS and to the Office UWP applications enforce a re-authentication, as demonstrated below. I've only had to do this once in the last year, but some readers have been bothered more often.

Anyway, if you do see this message, here's the somewhat unintuitive and long-winded (in terms of taps, it only takes a minute in real time) procedure to get editing and creating again: 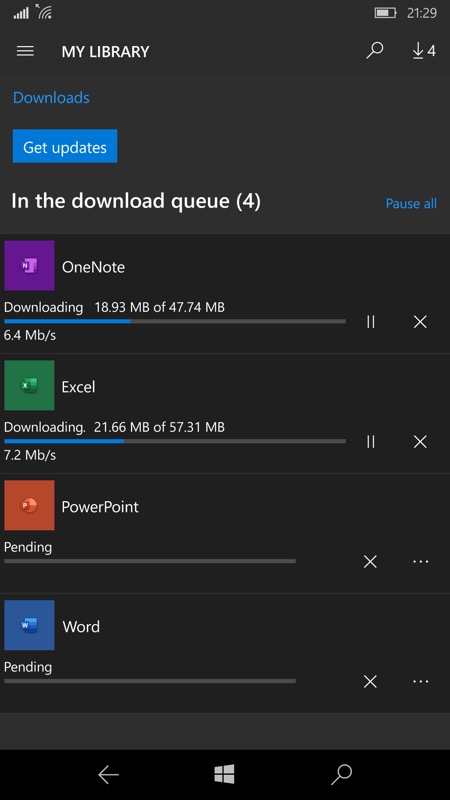 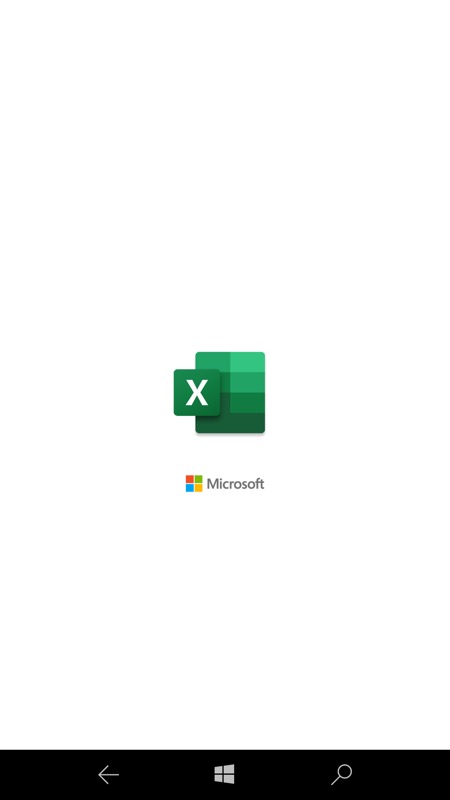 Just another monthly UWP app update - Word, Excel, PowerPoint and OneNote get regular updates still, even in 2019; (right) today's update is the first to feature the new iconography. 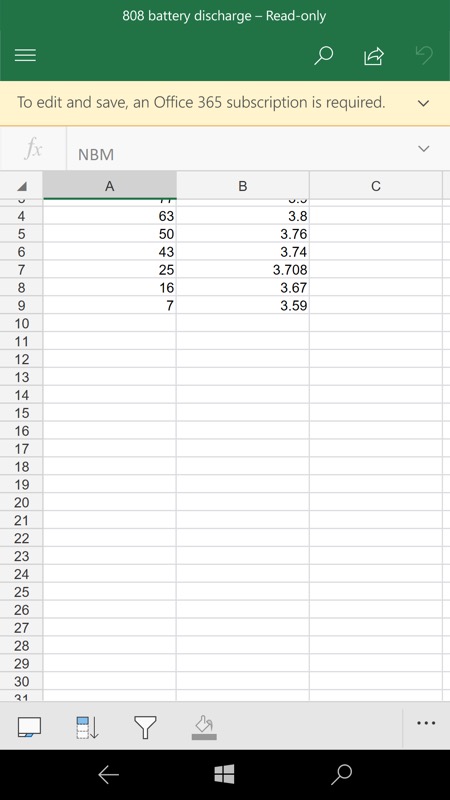 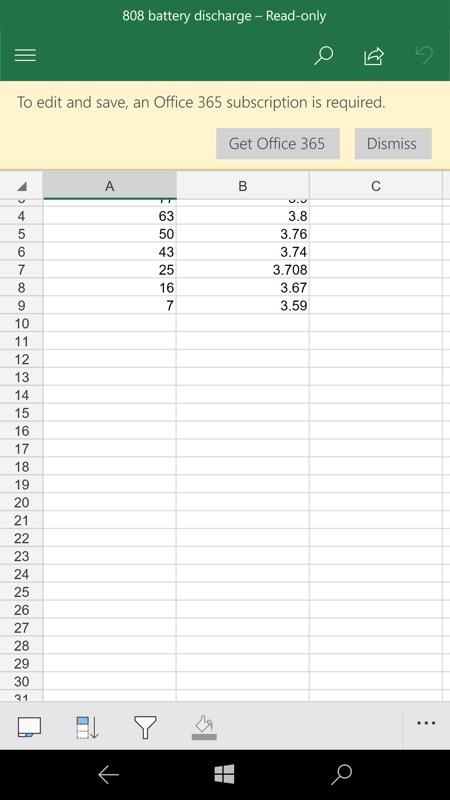 This is on my Alcatel IDOL 4 Pro then, on the very latest Windows 10 Mobile build and with the latest UWP app updates. AND the phone is signed into my main Microsoft account, which has a paid-for Office 365 subscription. But now I see the warning shown at the of the screen here. Tapping it reveals 'Get Office 365'... which I already have! 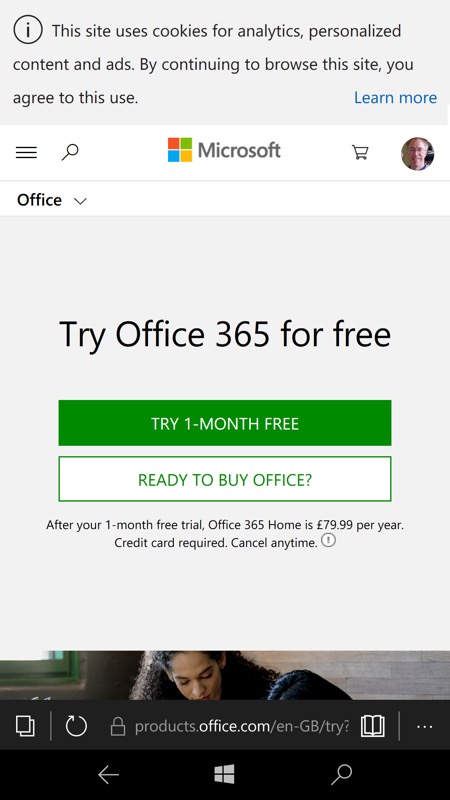 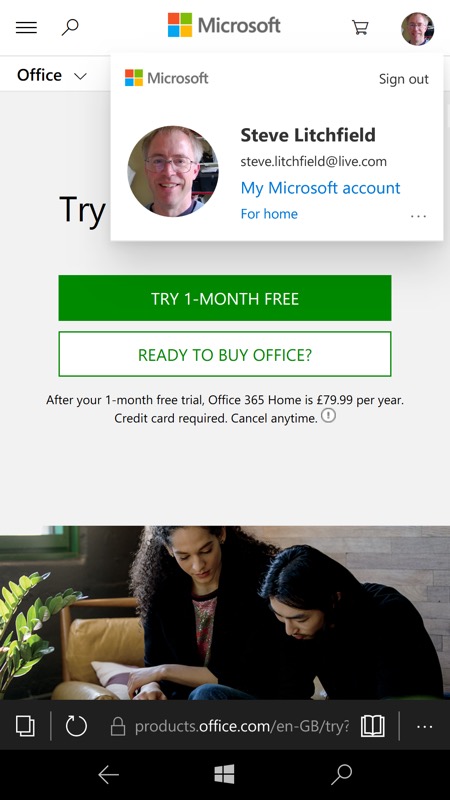 So, although counter-intuitive, all there is to do is tap on the button anyway, taking me online to the Office 365 sign-up page. However, the trick here is to tap on your account profile icon, top right, and then on the 'My Microsoft account' link. 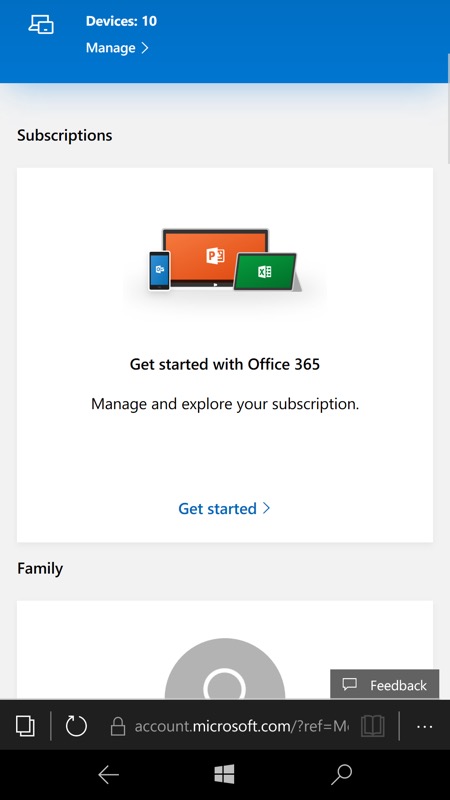 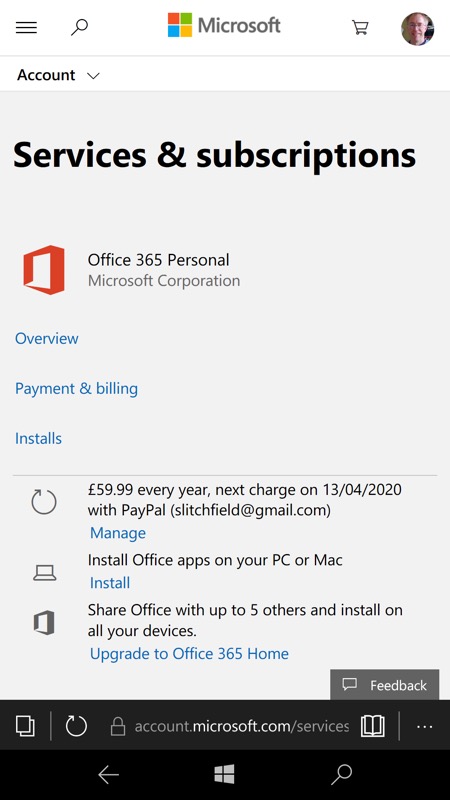 I then drilled down to your Office 365 subscription details. Here it shows that I'm signed up until 2020. In fact, it's not necessary to browse in such detail, I suspect the very fact that I've been shunted off to microsoft.com is enough to bring up, back in the Excel application (accessed via the multi-tasking carousel)... 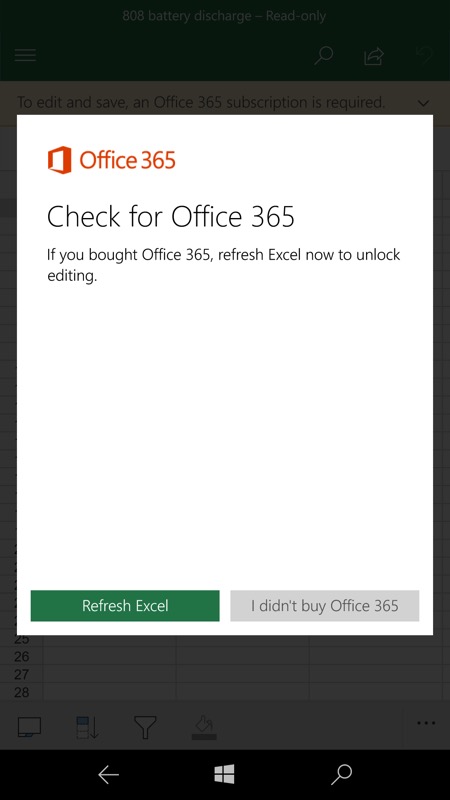 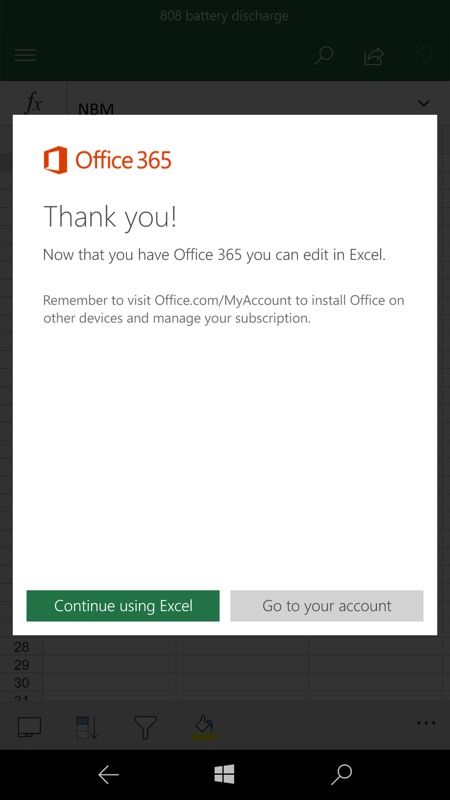 ... a 'Check' page in the app, with a 'Refresh' button. I tapped this and the buttons changed to 'Continue', with a 'Thank you!' message.

All a bit of a rigmarole, but the authentication system got there in the end. In fairness, Google Docs online also askes me to 'sign in' about once a month, so maybe occasional re-authentication is par for the course. Though I do think Microsoft could make things a little clearer in terms of what to tap on.

Data points welcome - do my 'exclusions' above fit the pattern of what you see on your own Windows 10 Mobile-powered phones?

Filed: Home > Features > How to: Fix the 'Office 365 subscription is required' editing warning