Chancing upon a very old smartphone industry magazine from 2009 while having an office clearout, I thought it would be interesting to pluck out half a dozen data points, especially in terms of review coverage. A lot has changed in 12 years, but there's still enough here that's recognisable. And, although I used to write for Smartphone Essentials myself from time to time, I'm not quoting any of my own material here - I'm checking to see how right or wrong the opinions of other writers of the time proved(!) Highlights? Verdicts on the Nokia N97 and N96, loads of Windows Mobile 6(!), an iPhone, and the earliest Android handsets.

Here's the issue's front page - I'll refrain from photographing individual articles, but will just put in thumbnails and then quote the relevant sections in plain text, I think this will be more helpful! 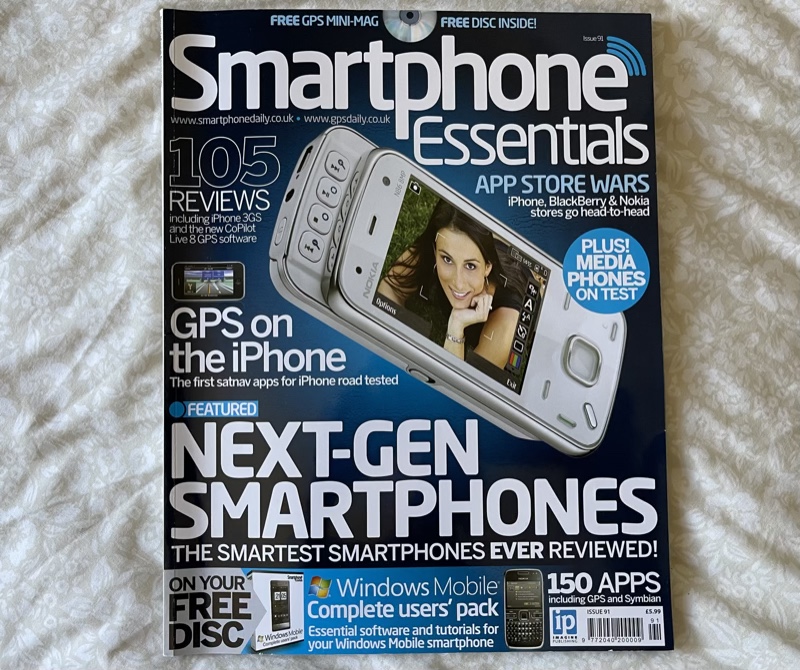 I do remember recycling almost all my old PDA Essentials and Smartphone Essentials issues (they send each over for free to everyone who had written something in it), but I kept this one because of the time period, covering the pivotal few months where Nokia arguably lost the plot and Apple got started in earnest on its stratospheric rise.

Again, steering clear of my own writing (so as to eliminate confirmation bias, plus I tended to do help desk and analysis/feature articles), let's pick out items of notable choice, remembering the date - mid-2009. It's an interesting snapshot of a fast changing tech world!

In the News section was "the Samsung i7500, also known as the Galaxy", Samsung's first Android handset, to complement its Symbian and Windows Mobile smartphones. The magazine said "A solid start to Samsung's Android adventure". Bit of an understatement, in hindsight. Within a couple of years, Android was all Samsung built on, and within five years it was dominating the world sales charts, at least in terms of unit sales.

"Palm Pre coming to the UK on O2" was the headline, with comment "The Pre's launch in Europe will be a very important step for the beleagured Palm". Despite a futuristic swipe UI (next seen in devices like the Meego-powered Nokia N9), the Pre failed to take off. Partly its tiny size in an era when phone screens were growing in size, partly because there was minimal marketing or reviewer outreach - quite simply, only geeks ever even saw this device. 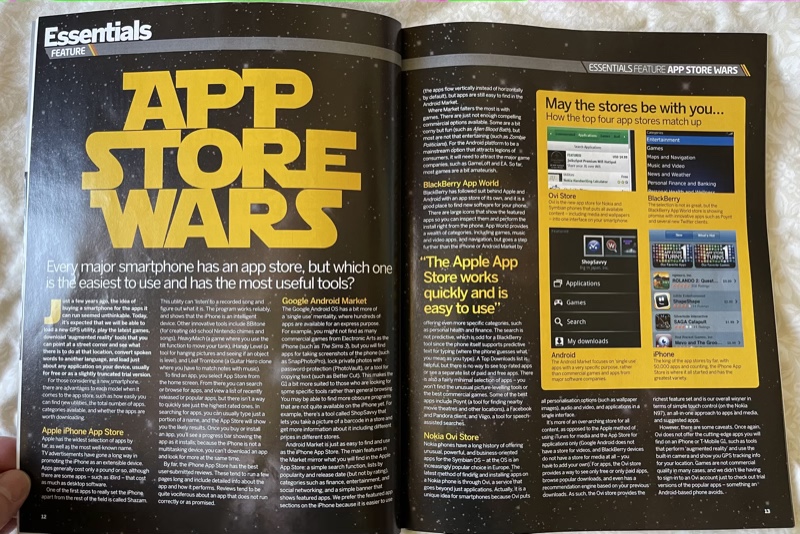 A look at the four main 'app stores' on smartphones, the Nokia Ovi Store is damned with faint praise: "puts all available content - including media and wallpapers - into one interface". Blackberry App World's selection "wasn't great", but "showed promise". Most interesting was the somewhat scathing "The Android Market focusses on 'single use' apps rather than commercial games and apps from major software companies". Google's Android store did in fact grow to rival the depth of Apple's iOS App Store, which was described as "the king of the app stores by far", with a whopping "50,000" apps(!)  In practice, the fortune of the app stores merely followed the success of their host platforms, I'd argue. Even Nokia's Ovi Store wasn't terrible - it was just slow (being written in HTML!) and died with Symbian itself four years later. 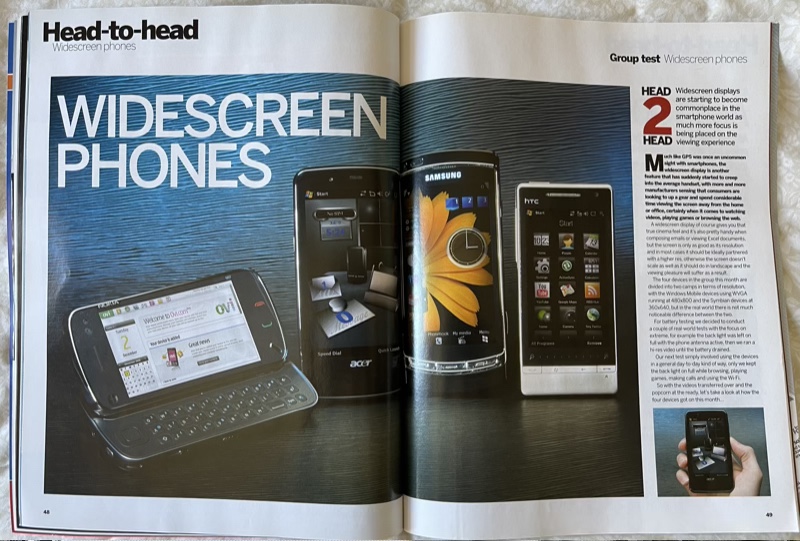 A pretty terrible 'category' by today's standards, but back in 2009 a 3.5" or 4" screen was enormous. So the editorial team took it as a theme for a review of the:

Fascinating to see a Symbian-powered handset winning out, even in 2009, though not under the Nokia banner. 2010 would see Android coming along in larger numbers, to take over the fight for 'widescreen phones'! HTC was one such that adopted Android, while the N97's sales were disappointing and it was quickly 'replaced' by the slicker N97 mini, while Samsung failed to commit further to Symbian and also went 'Android', as mentioned above. 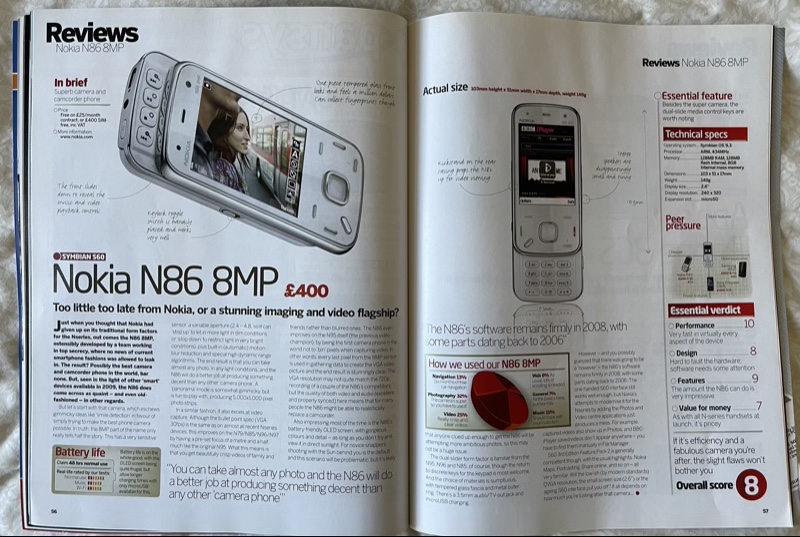 In the main review section now, the N86 was one of my most loved smartphones from the last 15 years - but I wasn't the one reviewing it for the magazine! The headline feature was the new, large, dual aperture camera, and "you can take almost any photo and the N86 will do a better job at producing something decent than any other 'camera phone'..." Video capture in particular was "stunningly clear", thanks to using all the pixels on the sensor to composite the final VGA video, helped also by the hyperfocal nature of the lens system in video mode. Having mentioned AMOLED above, "also impressing most of the time is the N86's battery-friendly OLED screen, with gorgeous colours and detail".

The N95-like form factor is "familiar" but the "return to discrete keys for the keypad is most welcome. And the choice of materials is sumptuous, with tempered glass fascia and metal outer ring." The use of S60 3rd Edition puts "the N86's software firmly back in 2008, with some parts dating back to 2006". Which is fair enough, this was the last great non-touch Symbian device, I contend. The overall verdict was "if it's efficiency and a fabulous camera you're after, the slight flaws won't bother you", with a score of 8/10.

I can't imagine the N86 sold that well in the climate of all-touch 2009, but the units it did sell went to very appreciative owners - myself being one such! 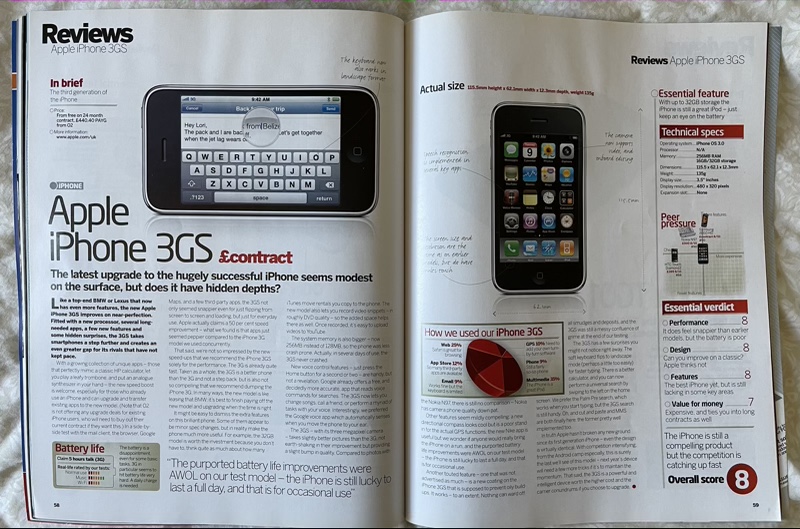 Arguably the point at which Apple's iPhone hardware could be taken seriously, this scores 8/10 here - it's curious that this wasn't higher, but the power-hungry internals of the iPhone were still seen as 'abnormal', with the review saying "the purported battery life improvements were AWOL on our test model - the iPhone is still lucky to last a full day, even for occasional use".  While that clearly isn't acceptable, Apple put in larger cells into its later models to compensate for the needs of the chipsets.

On the positive side, rather tellingly, the review opens with "Fitted with a new processor, several long-needed apps, a few new features, and some hidden surprises, the 3GS takes smartphones a step further and creates an even greater gap for its rivals that have not kept pace." Imaging was better on the 3GS, but the review noted "compared to photos with the Nokia N97 there is still no comparison - Nokia has camera phone quality down pat". And indeed I'd argue that it took Apple until about 2017 to really catch up to the Nokia/Microsoft of the same time frame...

There are other reviews and features, but you get the idea - I've delivered the most relevant highlights. My overall impresison from going back 12 years is of a smartphone world on the point of major transitions:

Comments welcome. Were you a smartphone user in 2009? How accurate do you think Smartphone Essentials magazine's reviews were, either at the time, or in hindsight?

PS. As for the magazine itself, it made it through a couple of years more, but just as with the rest of the magazine industry, struggled to compete with free online news and feature sources (not least the 'All About' sites, eh?!)