There's a video capture question I have for you to answer, and it's this. Do you feel lucky, punk? Well, do you? With apologies to Dirty Harry, it does seem as though there are two approaches to video capture on phones and it's not something we've ever covered before. Do you let the hardware and software work their auto-magic or do you take charge of everything, as if your smartphone was an old fashioned video camera or DSLR? The two approaches are completely opposite but are worth exploring, in terms of pros and cons.

Think, for a moment, about how you and most other people use a phone camera to shoot video. You're out and about and see something interesting. Mash down on the record icon and you capture what's happening, panning around as needed zooming in and out as needed, and generally letting the phone take care of everything. And results are pretty good on most modern smartphones, though if you look at the footage closely then you can see the auto-focus and exposure changes - it's a characteristic of phone-shot video and we're used to it now in 2021.

Now think about something you might see on TV or at the cinema. Everything is beautifully (or at least amply) lit, there are jumps every few seconds to different camera angles, with each one having a definite perfectly focussed subject and no 'focus hunting'. When panning, everything is silky smooth and exposure doesn't change in the slightest. Spliced together by an expert editor, it's the difference between phone video footage and 'professional'.

Even though all the latter can, in theory, be done on a smartphone too. Of course, it's far, far more work, which is why almost no one does it. In fact, the only time most of us ever see 'professional' videos 'shot on a phone' are at smartphone launches, when manufacturers want to showcase what their hardware can do. So they pay for a team of people to spend a week at an exotic location, with a model, messing around with rails and dollies and lights and reflector and tripods. Total cost £50,000. Just because they're trying to make a point.

When, in fact, you can do a lot in the same line for free on your current smartphone with just a tripod (and suitable phone clamp) and a bit of planning:

Whichever software you might plan to use, the principles and workload are the same:

1. Have a vision for what you want to create

This isn't a 'see it, and snap it' situation. When creating something 'professional', you have to plan ahead of time. Tell a story, etc.

This doesn't need to be drawings and cartoons, as per big budget movies, but does need to be a list of shots that are needed, along with subject and focussing notes. This last is most important as everything has to be focussed manually to avoid 'focus hunting'. Which means that you then need to worry about depth of field for your device at your chosen focus distance for the shot. You might want most things in focus, or you might be going for a video bokeh effect. It's a creative decision!

For example, in my brief demo embedded below:

This makes sure that you don't forget a shot or to set something up. Hopefully. Print the list off, on paper. 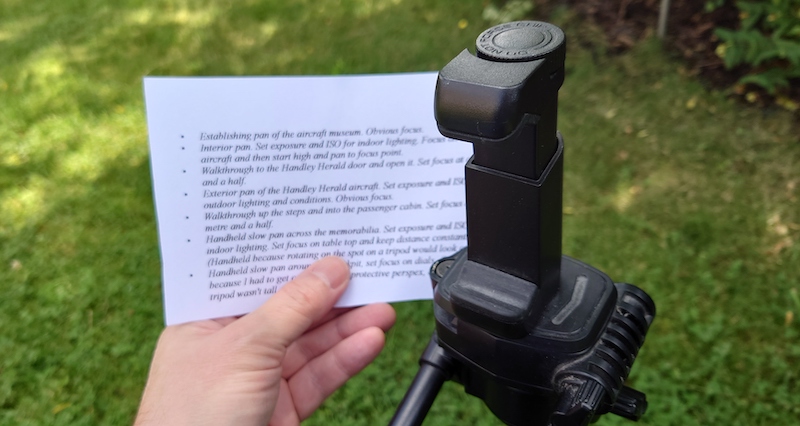 In this case, practising on existing phone software or installing new software, as needed. Grabbing your tripod and making sure it still has its phone clamp. If you have a phone gimbal of some kind then this is even better, since 'pro' video software won't do the digital, lossy stabilisation that you're used to with casual default Camera apps.

4. Head out and shoot

The fun bit, of course. Also the time consuming bit. Also the part where things go wrong. In my case, unforeseen:

You can see why companies pay silly money for models and locations, where everything can be perfect! Regardless, I'm just demonstrating a thought process here, not creating anything of worth.

Having got six of the seven planned shots from my storyboard then (though no. 3 was horribly rushed, getting past other visitors), I spliced them together in iMovie on my Mac. I left the original ambient audio, though for something professional one would normally add music. One tip is to leave a second extra on either end of each original clip, to make sure that noise or vibrations from your interactions don't get included in the final 'edit'.

Hey, it's only a quick demo:

All of which seems completely over the top for a touristy video, and leaving a standard Camera app on full auto-focus and auto-exposure would have been 95% as good, I think. The idea of doing 10x as much work to get something which is only 5% better is striking, but does show what's needed in order to 'go up a level'.

Thus, if you ever want to graduate beyond slotting together lots of 'auto' clips then you might like to start thinking in terms of planned shorter clips and views*. Alongside playing with third party camera software and learning the interface. As I did with Cinema Pro on the Sony Xperia 5 ii here - if there's enough interest then I'll do a tutorial on how to get the most from this specific app.

* I already do this to a degree when I film my Phones Shows, since in addition to the main talking head shots to camera, I plan a number of bits of 'B roll', close-ups or samples which can be played 'on top' of my talking head soundtrack. In fact, the idea of planning a script or narration should also be in your head, if appropriate. It's easy to think 'I'll just wing it, and improvise a narration', but you'd be surprised how hard it is to do this without stumbles, repetition, or hesitation. Think 'Just a minute' on Radio 4 in the UK!