If US operator Verizon choose to range the Lumia 920 an additional variant will be required. It would need to support, as a minimum, Verizon's LTE band (XIII), as well as its CDMA / EVDO network. A similar situation will apply for a TD-SCDMA / TD-LTE variant for China Mobile.

For the curious, it is only by examining the FCC Specific Absorption Rate (SAR) test results [PDF] and the Wi-Fi Alliance certification [PDF], that we were able to confirm that the RM-821 variant of the Lumia 920 is the global edition (920.1). It's worth noting that Nokia's global variants are nearly always coded .1, with region specific, and/or follow on devices coded .2, .3, .4 and so on.

The certification and the supporting documents that go along with it are a sea of scientific measurements and technical specifications. They offer an insight into the process of bringing a device like the Lumia 920 to market (and note this is regulatory certifications, operator certification is a separate process). There is some information that may be of interest to the technically minded consumer, such as the summary Specific Absorption Rate (SAR) results.

The technical diagrams show the sheer complexity of the internal design of devices like the Lumia 920 and just how cramped all the components are. One of the most interesting diagrams is an illustration of how the antennas are arranged in the Lumia 920. The main cellular antennae are at the bottom of the device, one for the high band frequencies (1700MHz to 2600MHz), and one for the low frequencies (700 Mhz to 900 MHz), and are supplemented by the high and low band MIMO antennae on the left hand side of the device. The GPS antenna is on the top right of the device, and the Bluetooth/WiFi aerial is just down from the top right corner.

The high and low band MIMO antennae in the Lumia 920 are additions from the Lumia 800 and 900 (see this Nokia manual for antenna placement). This means the Lumia 920 should have better RF performance than its predecessors. While this may translate into a better ability to hold on to a signal, MIMO antennae are really about being better able to cover the broader (and multiple) range of frequencies used by LTE bands. Using a MIMO antenna means the use of switches or tunable active components can be avoided, resulting is a significantly lower cost. 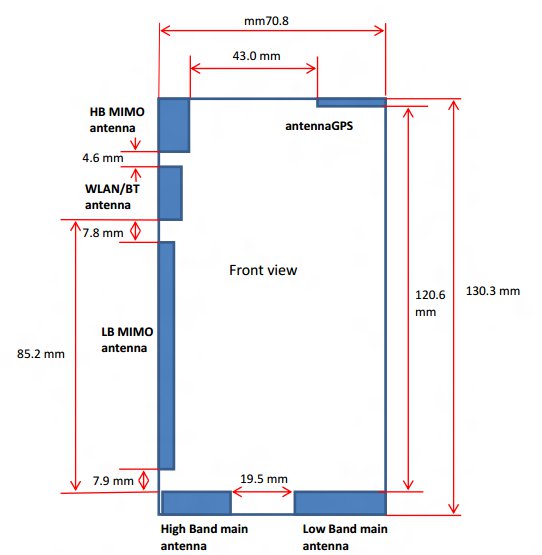 Not shown in the diagram are the NFC antenna and the Qi wireless charging coil, which are located on the back centre of the device.