Following the news of Google's decision to end new Exchange ActiveSync connections for free Gmail accounts, the official Microsoft Outlook blog has published a post highlighting the advantages of the technology and encouraging users to switch to Outlook.com.

It's certainly not a surprise to see the official Outlook blog encouraging people to switch, but it's notable that this is the first official Microsoft response to Google decision to withdraw Exchange ActiveSync support that we have seen, and it does include a line that says the Outlook team were "very surprised" about the announcement. That can only lead to speculation about how much of a surprise the decision was to Microsoft as a whole.

The blog outlines three simple steps that you can follow to switch from Gmail to Outlook.com, on of the options we mentioned in our original news story: 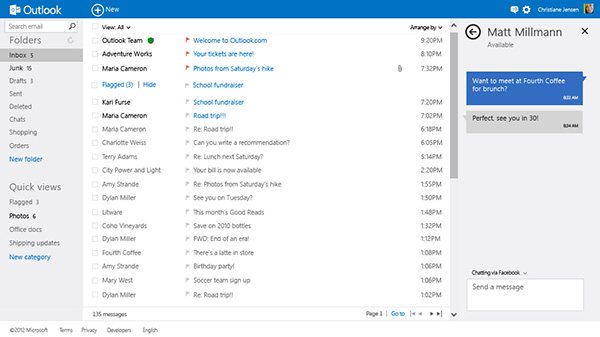 The blog also talks up some of the advantages of Exchange Active Sync, and includes a short history lesson:

Exchange ActiveSync was first introduced in 2002 as a way to help you have a great mobile email experience. Since then, it has continued to improve, with a number of optimizations specifically for mobile devices, including tablets:

You can read more about these innovations and a whole host of other nitty-gritty details in the history of Exchange ActiveSync.  It's because of these advanced consumer benefits that many devices choose to natively support Exchange ActiveSync-whether that's a Windows Phone, iPhone, iPad, or even a number of Android devices.

The above is, of course, a rather one sided look at the issue. It's perfectly true to say IMAP does not sync calendars and contacts, but CalDAV and CardDAV certainly do, so at one level there's no major functional difference. The points about push and auto-discovery is well made, and should be considered the greatest areas of concern.

Issues around bandwidth performance and battery life are also important. However, quantifying any difference is difficult, as designing a fair comparison test is far from easy, and even then may not reflect real world usage.