A StatCounter reminder about lies, damn lies and statistics

Industry analysts love to pull insights from pretty charts - and I'm no exception - but hopefully a dash of common sense and perspective helps too, when looking at data like that shown below. Any takeaway, from the 'All About' sites' perspective? That Symbian's very much still in active use and that, despite welcome sales gains in Western markets, Windows Phone use is still small when considering worldwide stats. Some thoughts below.

StatCounter, you may remember, is pulling data about web browsers from users visiting sites which have the appropriate tracking technology plugged in. In other words, it's not about sales or even phone ownership, but specifically about users browsing web sites on their phones. Maybe I'm unusual, but I only look up a couple of web sites a day on my phone - most Internet content comes in via clients (email, social, media, etc.)

However, laying aside that only a fraction of web sites have the tracking tech installed, assuming that most users do some web browsing while mobile, as a snapshot of 'active' smartphone owners then StatCounter is probably as good as any other system. Here's the last 12 months, as seen by smartphone OS: 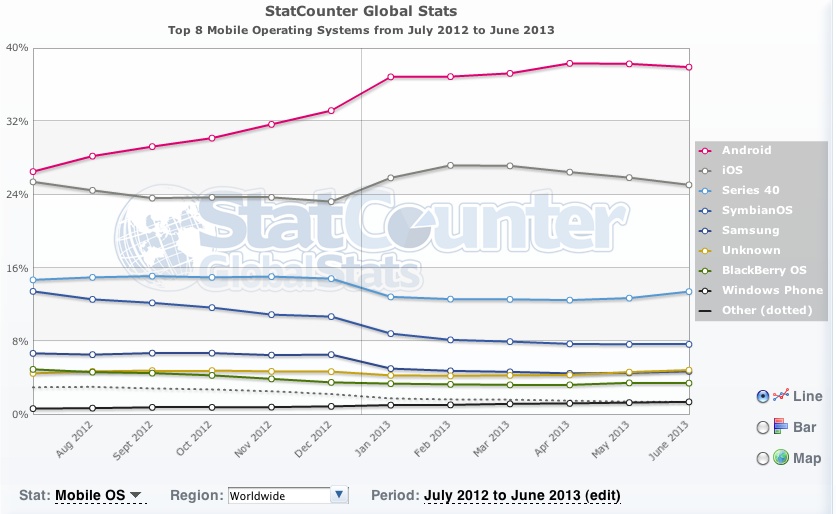 Remember that these are worldwide statistics - you can get regional breakdowns on the StatCounter reports web site.

With our 'All About' hat on, it's interesting to look at the data for both Symbian and Windows Phone. Symbian, now almost two and a half years since its announced retirement, and a year since the last new Symbian device was made available (the Nokia 808 PureView) has seen a reduction in active use, not unnaturally, though the decline does seem to have bottomed out at just under 8%, tying in well with my own estimate of there still being around 100 million active Symbian users. In other words, people for whom their Nokia-made Symbian device still fits their needs well. It'll be interesting to see how long Symbian's 'active' base can stay in third place (I don't count 'Series 40' since it's not a smartphone OS in the true sense of the word).

There has been some good news in terms of sales of Windows Phones in Western markets recently, but the installed base for Microsoft's new platform is still 'only' somewhere around 30 million, both from sales reports and guessing down from there, plus this ties in with the StatCounter 'active use' figures above, emphasising how far the platform has to go in the long term. Mind you, as the newest mobile OS, there's still every reason to remain optimistic. Certainly in terms of applications and mind share, in most markets, Windows Phone is now the 'third ecosystem' that it so badly wanted to be.

My headline, however, does rather give lie to my feelings about some of these numbers. By choosing the region, the time period, whether sales or active users are counted, by changing the definition of smartphone, by all these means you can significantly change the message. What really matters to most people, I suspect, is how well a particular mobile OS is doing in their country, i.e. what are people around them using, which has the best support and services, and so on. And this will, no doubt, vary wildly by country!

Comments? Do you think StatCounter's charts/numbers are reliable and/or representative?