Nokia's utility app, Transfer my Data, which makes it easy to copy contacts and other data from almost any recent phone to a new Windows Phone device using Bluetooth, has been updated to version 5.1.0.19, adding wider support for the transfer of text messages, support for transfering music files from slect Symbian and Series 40 devices, and a number of bug fixes.

Transfer my Data has received a number of updates over the last two years, starting life as the  Contracts Transfer app, before evolving into Transfer my Data and adding support for additional types of data (pictures, text messages, and now music).

Transfer my Data ships with every Nokia Lumia (Windows Phone 8) device and is most useful when first setting up a device. The version that ships with a device is often behind the version that is available in the Windows Phone Store. Transfer my Data is therefore one of the apps that it is well worth checking manually for an update when you get a new Lumia device (search for "transfer by data" in the Store app). 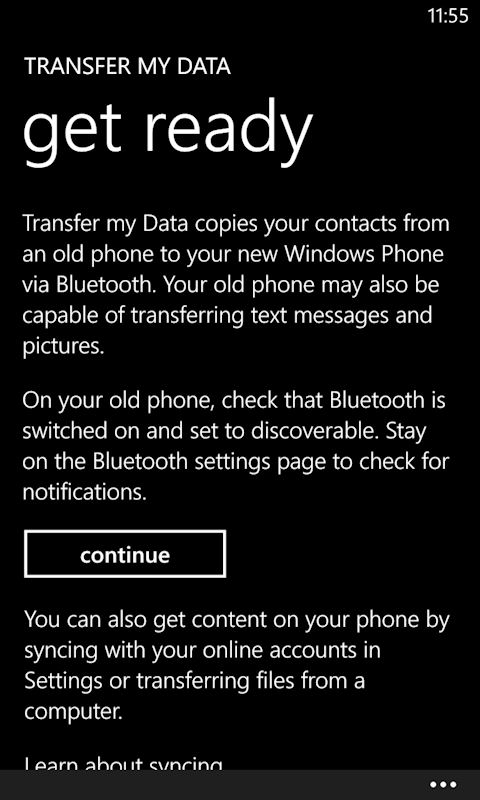 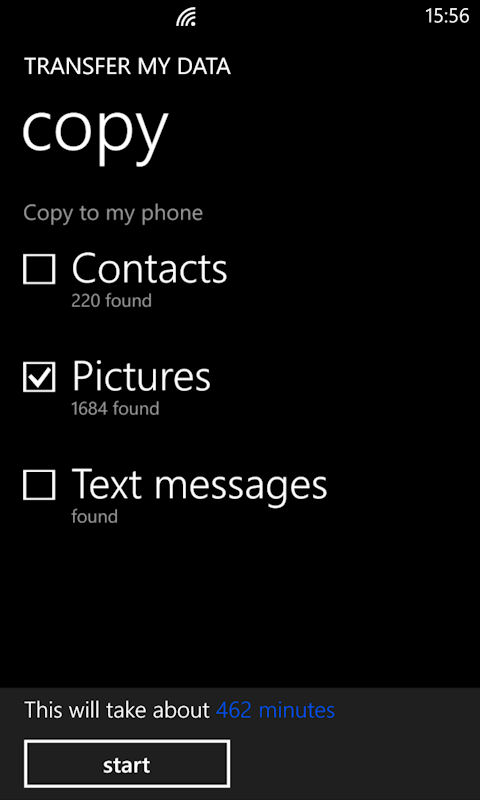 As we previously described Transfer my Data uses the PBAP Bluetooth profile to enable the transfer of contacts:

Transfer my Data supports the copying of data from devices that support the PBAP Bluetooth profile (Phone Book Access Profile) and/or SyncML. In practise this translates into support for almost all recent smartphones and many recent features phones (e.g. Symbian, iOS, Android, BlackBerry, Series 40 and more). Older devices (5+ years) are generally not supported (e.g. no support for Nokia S60 3.1 devices, such as the E71 and N95, or for older Series 40 devices). In some cases, depending on the implementation of PBAP on the source device, certain data fields will not be transferred (e.g. more unusual contact fields such as fax).

The wider support for the transfer of text message, added in this update, is enable by the Bluetooth MAP profile (Message Access Profile). The Message Access Profile is more usually used to displaying incoming text messages (and, in some cases, emails) on a car dashboard (or hands free accessory kit), but can be used for any process that requires the exchange of messages between devices, such as is the case with the new version of Transfer my Data.

The new version also supports the copying of DRM-free music files from select Symbian and Series 40 devices. As with pictures transfer, this uses a method that is proprietary to Nokia (relying on an app / software on the remote device), so is only available for Nokia devices (i.e. not using a standard enabled transfer mechanism).

We've summarised the support for each content type, for the major platforms, in the table below. The basic summary is that most Nokia devices support all three content types, while most non-Nokia devices will support the copying of contacts and text messages.

It's worth pointing out that if you're already syncing data to an account in the cloud (e.g. social or email), then you may not need to use the app as you can set up the same accounts on Windows Phone (e.g. Facebook, LinkedIn, Exchange, SkyDrive) and sync your data that way. It is also possible to sync data via a PC. However, for many the Transfer my Data app will be the easiest way to get their valuable contact data on to their new phone.

Transfer my Data is a quick and easy way of copying contacts from almost any phone (Symbian, Android, iOS, BlackBerry, Windows Phone and others) to your new Windows Phone using Bluetooth. Some phones may also be capable of transferring text messages and pictures, including many Nokia phones. Transfer my Data copies all your contacts into the Windows Phone People Hub, from where it’s easy to call, mail, chat or follow friends on your favourite social network. On supported phones, contacts can also be exported to and imported from an SD card.

Transfer my Data is a free download from the Windows Phone Store.