We recently looked at the latest Toca Boca game for Windows Phone, designed for handing to your kids in bored moments (that's them being bored, not you!) - Toca Life. This has now been renamed Toca Life: Town because there's a sister title, Toca Life: City, shown off below. As usual with the series, it's an open play area in a virtual environment, with hundreds of things to tap and drag around. In other words, perfect for little ones. Hopefully your smartphone is in a protective gel case too? You'll need it!

From the app/game description:

Thanks to the great response to Toca Town, we're bringing you Toca Life - a series of apps that gives you an even bigger world of everyday fun. First out in the series is Toca Life: Town and Toca Life: City!

CREATE Try, experiment and customize. It’s time to get creative in Toca Life: City! Change outfits, dye your hair any color and switch hairstyles in the Hair 3000! There are millions of ways to personalize the characters - we dare you to create them all.

EXPLORE Say hi to 4 new locations and 28 characters! Go shopping at the mall, grab a bite to eat at the food park or invite friends over to your loft. Characters, and anything they are holding, can easily be transported between locations.

DISCOVER Just like in Town, there are treasures hidden everywhere in the City! Take out cash at the ATM, change outfits, wash your clothes and go for coffee with a friend. There’s something for every age! 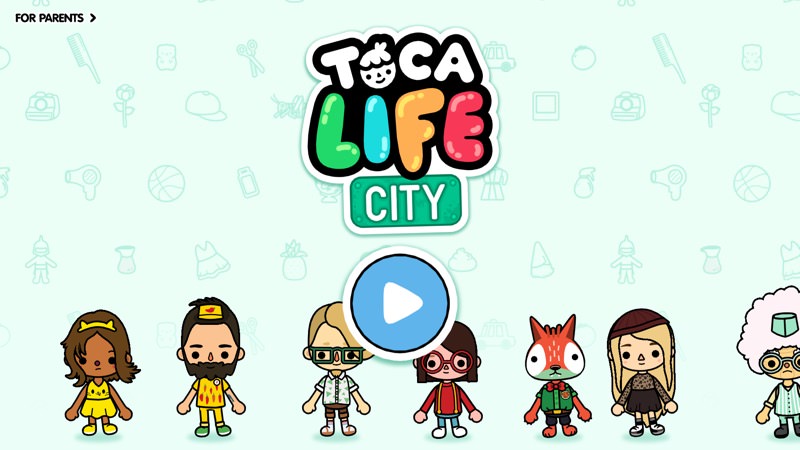 Notice the huge play icon for the kids and the tiny hyperlink for parents (which even then has to be swiped afterwards, for security). The cast of dozens are all available from the people carousel, available by tapping the school crossing sign at the bottom right of most screens in the game. 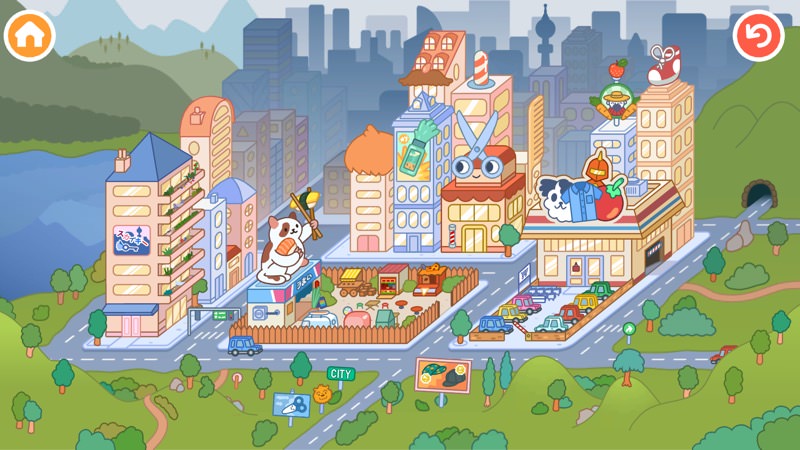 Here's the city - it's not that huge, but it does look... urban. Half a dozen hot spots/buildings lead the kids into the appropriate play areas.... 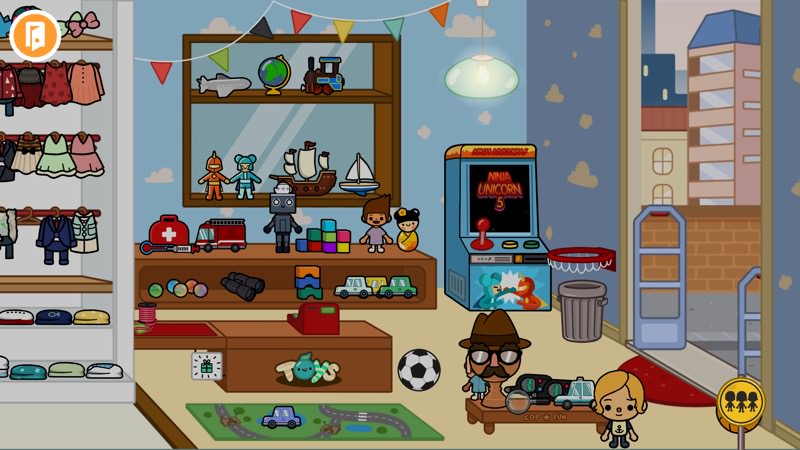 Here's the 'home'/apartment area. Almost everything can be picked up, dragged around, applied to other objects and then.... well, see what happens. For example, clothes dragged onto a character dress them instantly, food and drink dragged on get consumed, and so on. 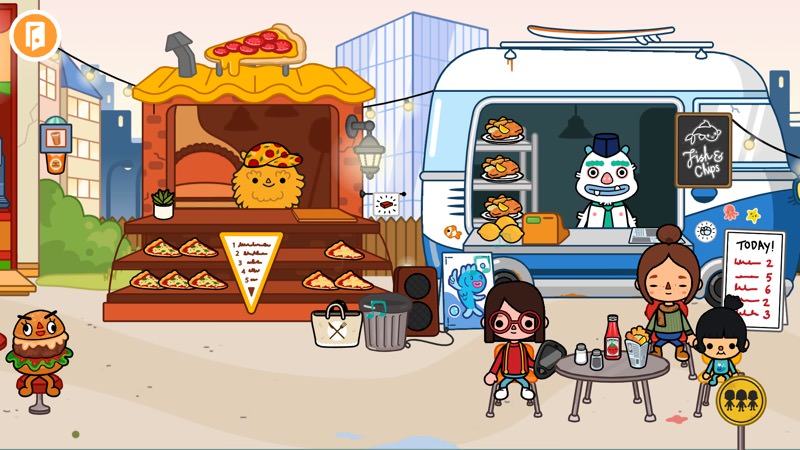 At the fairground, there's plenty of fast food, kids can knock themselves out without you worrying about their diet? 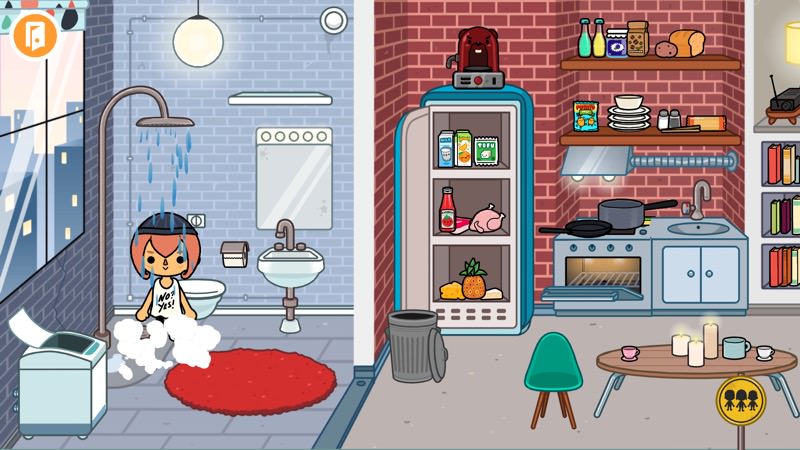 Showering in one's clothes? Of course! Taps can be turned on and off, lights ditto, radios, iPods ditto.... Yes, it's trivial, but we're talking about a five year old enjoying this, so... 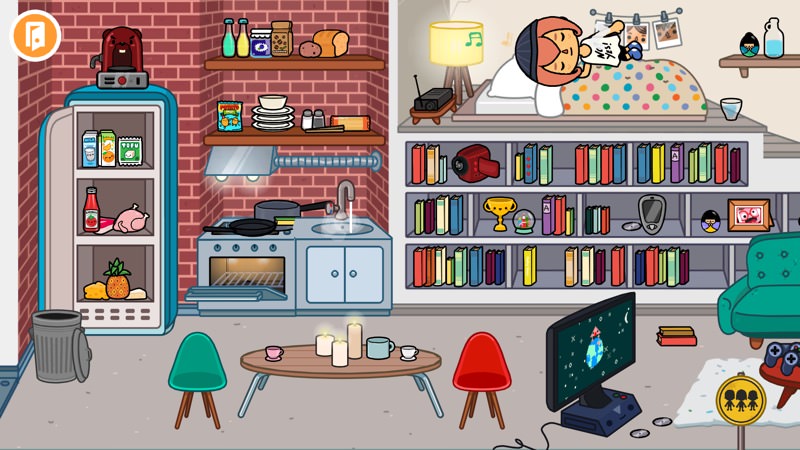 More interaction - blow candles out and then light them again with a tap, play an on-TV video game, put a character to bed, you get the idea... 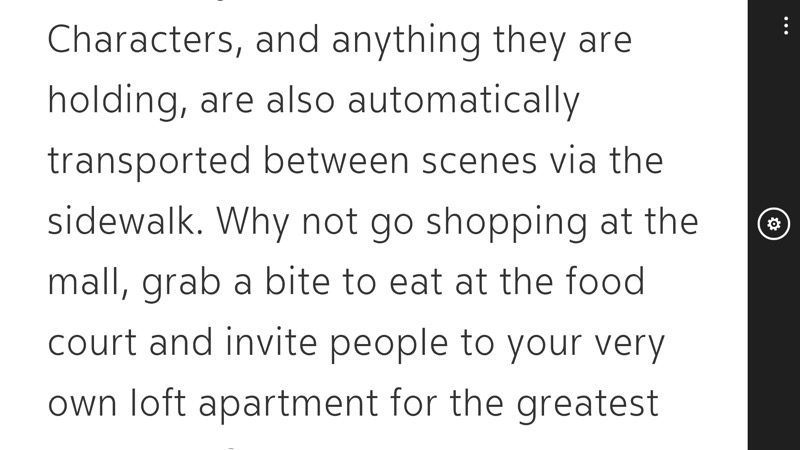 The 'parents guide' turned out to just be a text document, presented in a font that's too large. Read it at arm's length!! 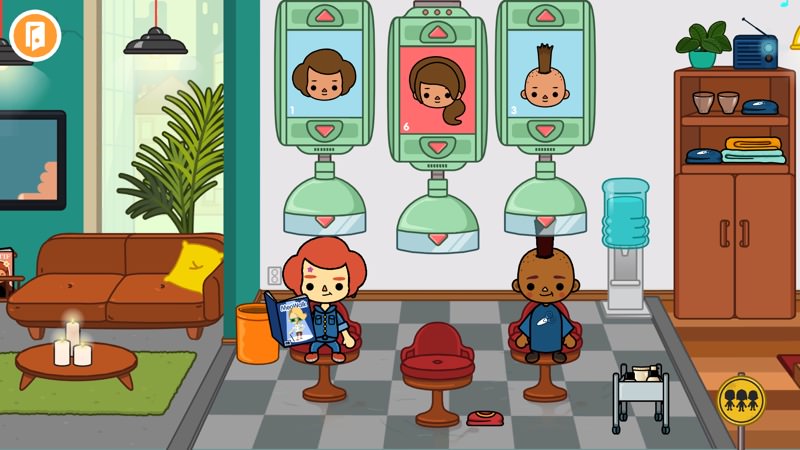 One of the game's highlights, a beauty salon where you select the hairstyle on the fruit machine like roll and then this is applied to the character in the chair. Uh oh, mohican incoming!

There's one big caveat, of course - if your kid presses the Windows Phone control keys then all bets are off and they're into your phone. So using a game like this on kids this young means that the only practical way is to set this up as one of the options in Windows Phone's Kids Corner feature, the sandbox, effectively. So make sure you do this!

Very nicely done, and inexpensive at the moment at less than £1 - though its success will depend on how kids get in with the game, not a 50 year old reviewer. Watch this space!