From the same developer as the terrific Traffic Racer (my review here) comes a motorbike variant - except that this time it's out and out freemium. It's a shame that the small-initial-purchase-plus-sensible-purchases model seems to have failed, I thought it a nice balance. In contrast, Traffic Rider goes full throttle for your money, with the best purchase for the average gamer being the starter kit of virtual cash and coins, plus ad-removal, for £5 or so in the UK Store. Making it a relatively expensive game - though the visuals and gameplay are such fun that for the hardened racer I'd state that Traffic Rider is worth it.

This time, you are behind the wheels of a motorbike in a much more detailed gaming experience, but also retaining the old school fun and simplicity. Traffic Rider takes the endless racing genre to a whole new level by adding a full career mode, first person view perspective, better graphics and real life recorded bike sounds. The essence of smooth arcade racing is still there but in the shell of the next generation. Ride your bike in the endless highway roads overtaking the traffic, upgrade and buy new bikes to beat the missions in career mode. Now it is time to hit the roads with a motorcycle!

With the caveat that I was trying Traffic Rider on a high end Lumia 950 XL, the smoothness of gameplay was impressive, the frame rate seemed up in the 60fps range and the physics of motorbike riding seemed about right. With the caveat that you wouldn't really be trying to skim past articulated lorries at 100mph in real life. I hope.

Before you go further, note that the high profile nature of the game has meant an inordinate number of fakes in the Microsoft Store. I honestly give up on the Store - there's simply zero quality control at Microsoft's end. it's obviously automated and trivial for scammers to use. JUST PUT A HUMAN BEING OR TWO ON THE CASE!

Here are just some of the bogus entries in the Store: 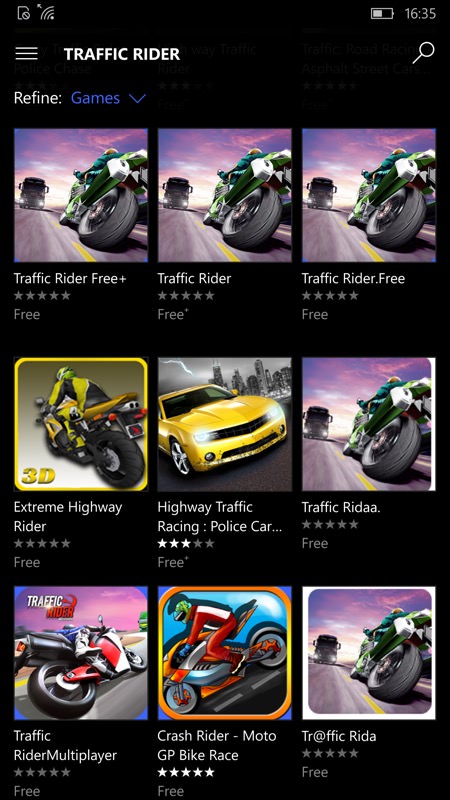 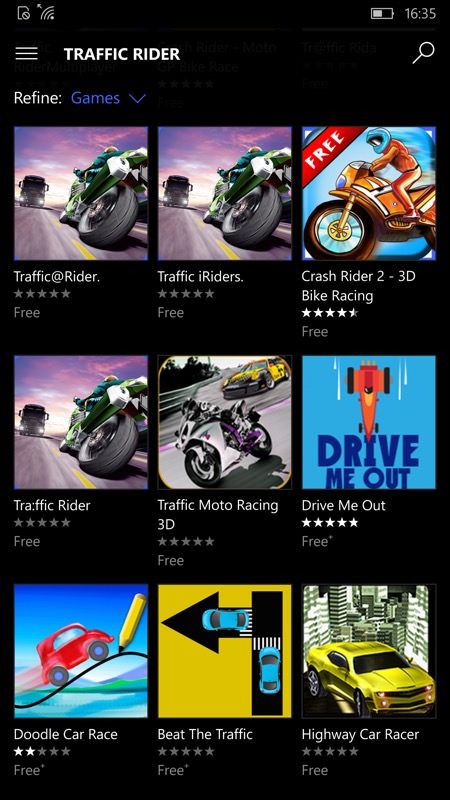 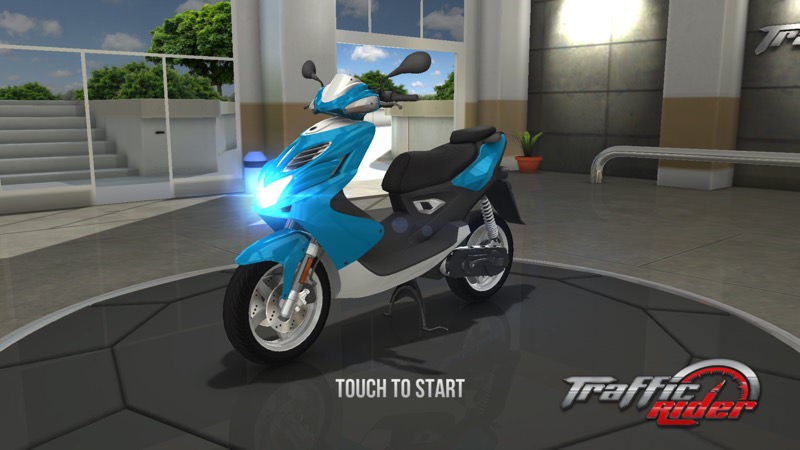 Getting going. Impressive production values throughout. Mind you, this is a cross-platform title and the resources can be used across iOS and Android too... 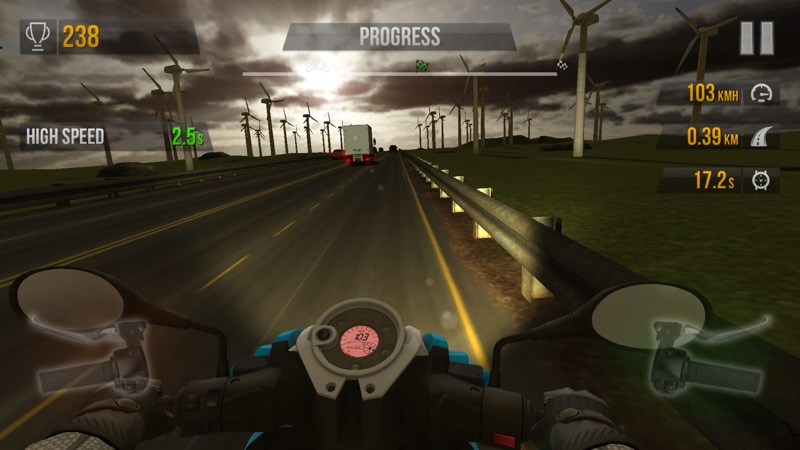 In action - the visuals are terrific, with variety of scenery and lighting, and with random traffic in all four lanes - just as well the roads are all dead straight, eh? Bike controls are press for throttle on the right and brake on the left, nice and simple. 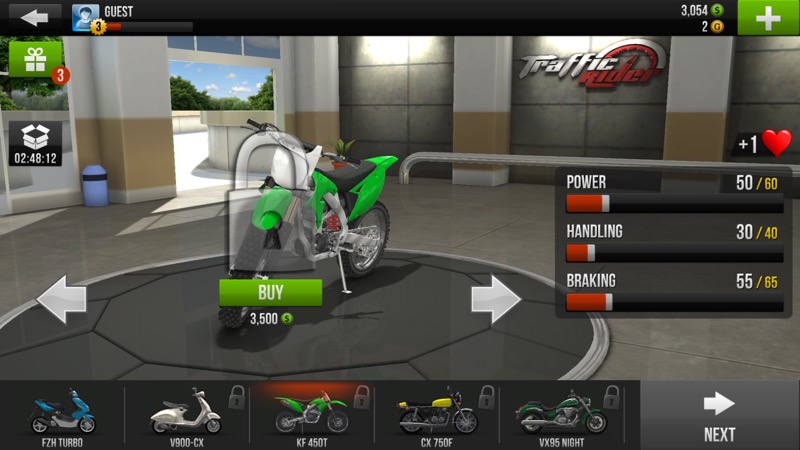 This shot of the bike selection process gives you a good idea as to the freemium mechanics. You race to build up dollars and earn coins, which you then use to buy race extensions and newer and faster bikes. But, as ever, this takes forever, so the developer would much rather you used real world money to buy one of the standard or special offer (see the two offers, top-left) packages. 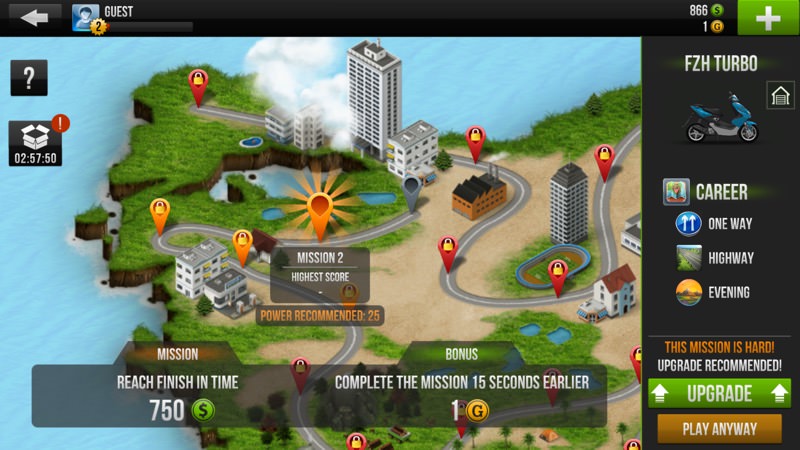 Don't be fooled by the sweeping curves in the map view in career mode - you'll progress in terms of scenery, weather and traffic, but the roads stay - essentially - dead straight! Note also the time goals for stages - meet them and you get to race longer and earn more.... 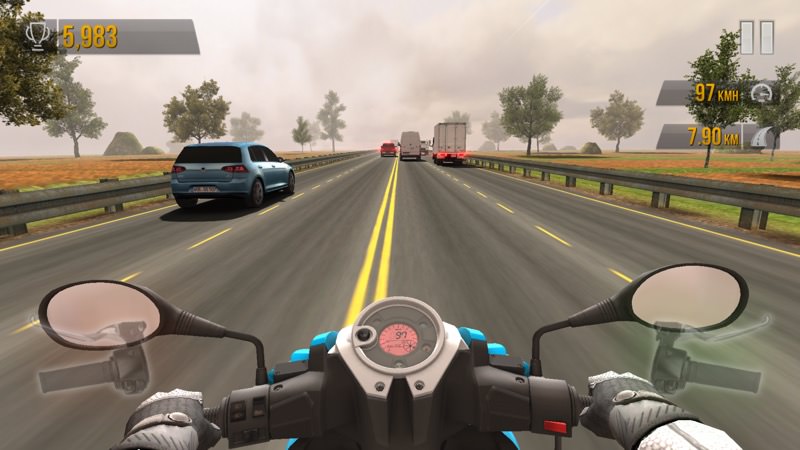 Back out on the open road, this time in sunlight!  The other traffic slows down and accelerates, runs at different speeds, changes lane, and so on - and it's your job to stay alert and weave through the gaps at high speed. That's the game, as they say! 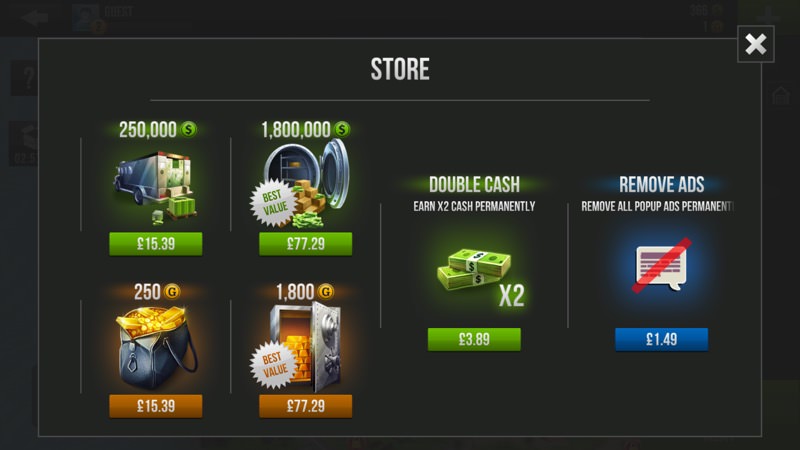 With no up-front purchase fee (unlike Traffic Racer), the developers are more hard-core in terms of freemium in-app purchases, sadly. What, you mean I could spend £155 in a couple of screen taps? That's INSANE. Watch out what you tap on! 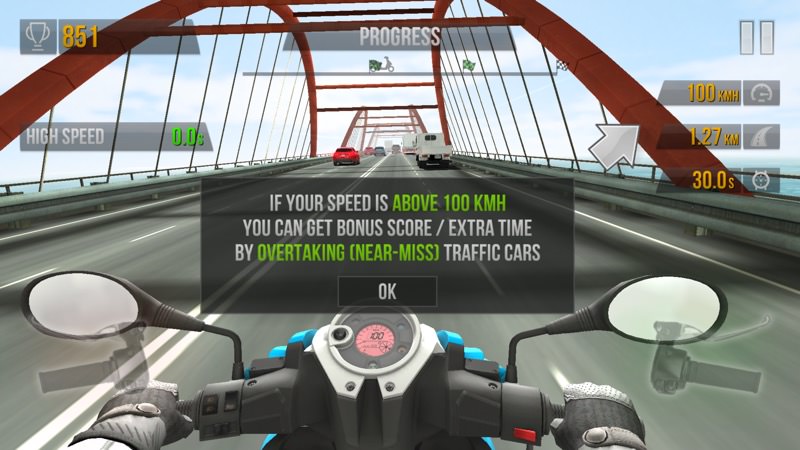 The key to doing well is to engineer high speed near misses where possible. Gulp. Adrenaline rush! 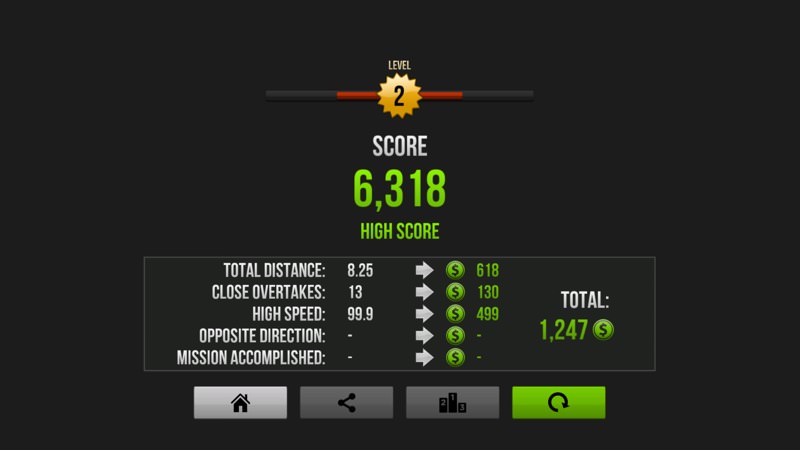 I'm sure you'll do better, here's the best of my first few goes in the 'Endless' mode... 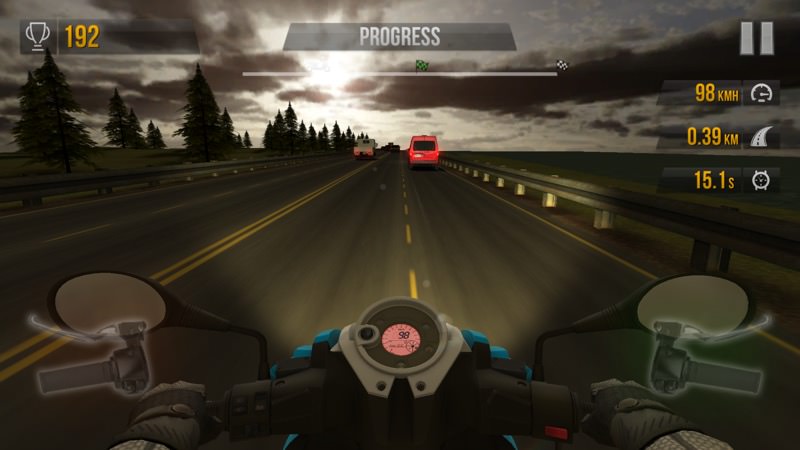 Meanwhile, out on the open road, I cue up Steppenwolf, don my helmet and 'head out on the highway'....

You can grab this freemium epic here in the Store. It's bouquets for the game itself, a 'meh' for the freemium mechanics generally, and a brickbat or two for going overboard on the most outrageous of the in-app purchases.