You may remember that I only just got round to reviewing the original Microsoft Wireless Display Adapter (WDA)? I found it surprisingly useful, though connections were a little erratic and there was definite latency in terms of the interface when driven from a smartphone. Well, Microsoft announced the next generation of the WDA this week, ahead of MWC 2016, see the quote below.

Back in 2014, we launched a brand-new accessory that allowed people to project anything from a Miracast®-enabled tablet, laptop, or smartphone onto a big screen, wirelessly. The Microsoft Wireless Display Adapter didn’t rely on specific apps to display content – any and all screen images went right to an HDTV or monitor thanks to Miracast technology.

We heard great feedback about the device, most notably from students and mobile professionals, due to the size, ease of use for setup, and the fact there was no internet required for it to work. Road warriors have been using the device to make mobile work stations at hotel rooms without being hunched over a desk, and students found it useful for streaming movies to a TV directly from the couch. Additionally, businesses are plugging their Wireless Display Adapters into their overhead projectors; eliminating the need for those multiple cords, wires, and adapters we all scramble for in order to present in a conference room.

So today, we are announcing the next generation of Microsoft Wireless Display Adapter. It brings the best features and functionality of the first generation while reducing the latency and packing it into a new form factor. It’s still just as easy to setup and use and also allows people to mirror or extend their screen from Miracast-enabled Windows 10 phones, tablets and laptops, including the Surface lineup.

You can pre-order the Microsoft Wireless Display Adapter now in the U.S. and Canada, and it will be available on March 1, 2016, for the estimated retail price of $49.95 at Microsoft Store, Best Buy and Amazon – it will be coming to future markets soon. Please visit our Microsoft Accessories website for additional information.

The photo shows that the main WDA body and the USB section are now the same size, confirmed by the Store photo too: 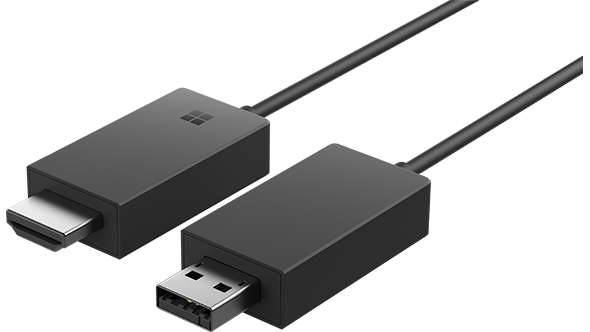 It's possible that this is for cosmetic purposes only, I doubt that the USB portion will also contain processing chips. Regardless, the 'reduced latency' sounds good, the shallower protrusion from the back of a monitor helps it fit behind displays that back onto walls and have ports facing out of their backs, and hopefully the new WDA will come revised firmware that will be more reliable than the original's (as I noted in my review).

We'll get one in when this hits the UK in April (or so).