With continuing rumours that '14393' is being considered as the build that rolls out to the great unwashed as the initial Anniversary Update (I'll believe that what I see it!), Microsoft has pushed out yet another Redstone build to Fast ring Insiders, 14393.3, concentrating on fixing more bugs. However, there are still major connectivity issues, media control bugs and some of my applications get greyed out for no reason for days at a time. There is NO WAY that Redstone is ready for the masses on mobile yet. More work needed by Microsoft. 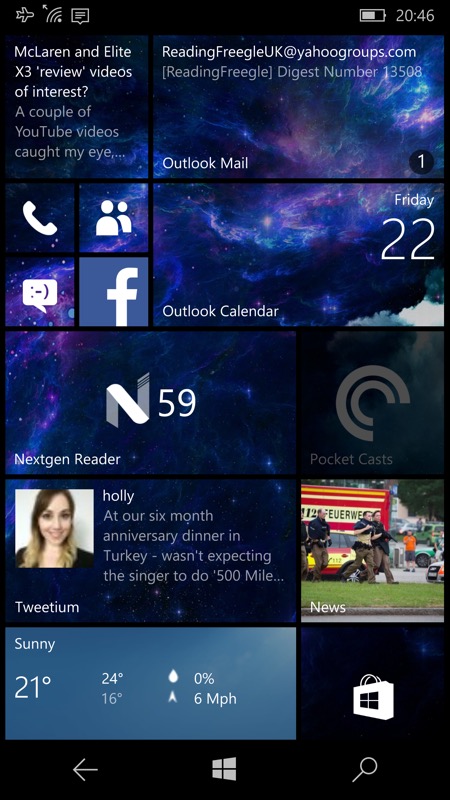 See the screenshot above and look carefully. I've now gone through three podcatchers in 24 hours and EACH OF THEM GET RANDOMLY GREYED OUT A FEW HOURS LATER (and therefore can't be run at all). It's insane and extremely annoying. And must be a platform bug, as multiple applications suffer. The only fix for each is to uninstall them, lose all their data and settings and then re-install from the Store. The app then works for a few hours until the OS breaks again. Gah!

Is it just podcatchers? Any more app types?

Here's the reported changelog, from the Microsoft Feedback Hub:

So, as ever, they've fixed a bunch of things that we didn't know were broken and are ignoring most of the things we've been complaining about. I don't want to be too negative, but I've just had to go back to Threshold for some of my devices just to maintain my sanity.

I've said before that Microsoft's rollout of Redstone ('Anniversary Update') will be delayed and/or staggered - let's hope it's very slow and very staggered, they need yet more time to fix the OS up. In my opinion. Your data points welcome!

As ever, head into Settings/'Update & Security'/'Phone update' in order to check the download and install progress of the update on your Fast ring device....