Another surprisingly good UWP game for Windows 10, including Mobile - I'm ramping up some of the game mentions as we hit the Christmas and New Year holidays. Drone Strike 3D - Army Stealth Attack is a lengthy but fairly accurate title for what is a point-and-shoot arcade game. There's no real 'flying' involved, despite the graphics showing Predators, so it's more like you're shooting from a quadcopter, but there is plenty of action and challenge - it seems that the enemies know all about drones and how to shoot them down.

From the Store description, which is a little over the top (just go with it):

Good luck war commander! You are leading the army. Become the ultimate air warrior in this military strategy drone game by battling to gain control of the fleet air base. Battle across the robot steel world, take command of Hi-Tech UAV aerial assault fleet vehicles and establish VTOL supremacy from your drone strike to your infantry shooter hostiles.

If you don't want to be invaded by terror attacks, build your ally hi-tech arsenal. UPGRADE your UCAV quadcopter Drone strike and equip it with missiles and machine guns. Add and upgrade Multi-Target Shooting Missile system and huge destructive rockets to win over the opponent army in rogue wars.

There's a lot here, then, in terms of scenarios, weapons and conditions. Ultimately though, it's a case of aiming with touch and firing off the appropriate weapon from whichever aerial craft you're using. Some weapons are guided in real time, others are set at a target and then left while you switch to the next one, still others can be programmed for multiple targets at once.

If this sounds easy then it's not, because the bad guys shoot back with anti-drone missiles and a few hits from these will knock your drone out of the sky. 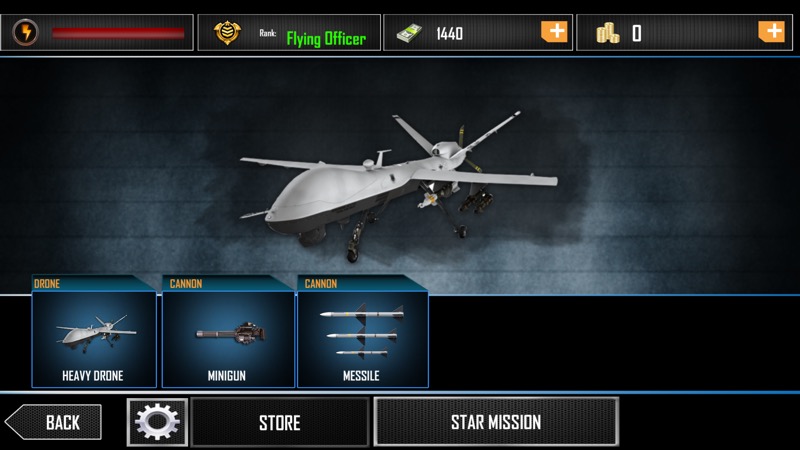 Getting started. Have a Predator (and pretend it's a quadcopter, i.e. hovering in one spot, but let's not get too pedantic) 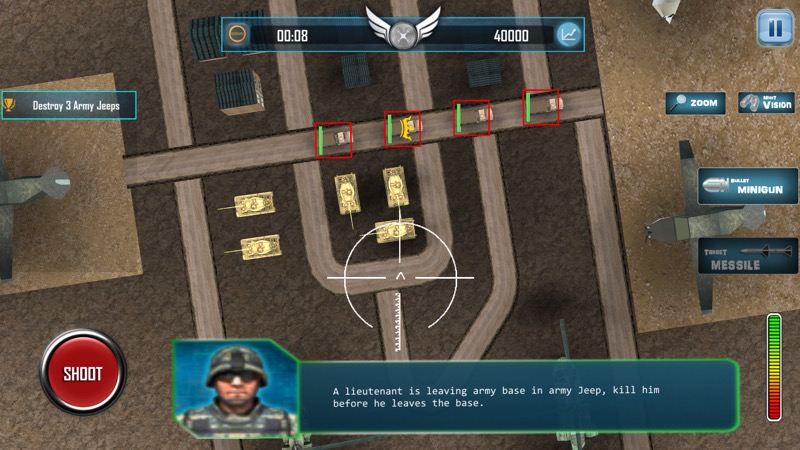 Training missions lead you through the four types of weapon and then it's into missions, starting with something simple like this, four (moving) jeeps are leaving the camp and you need to blow the right one up from the air. Or, you know, just blow them all up for the hell of it... 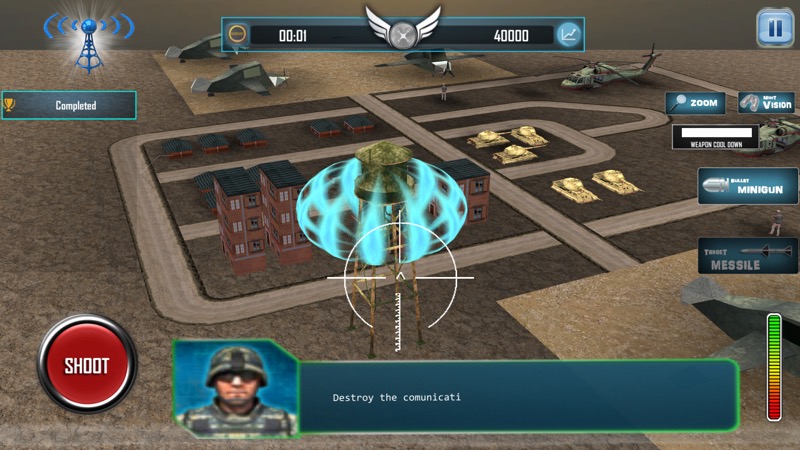 Into one of the more difficult early missions, this communications tower is protected by anti-drone missile systems. And they're vicious! This isometric 3D view is from the short animated intro to each level. After the intro, you're into the drone's view from the sky... 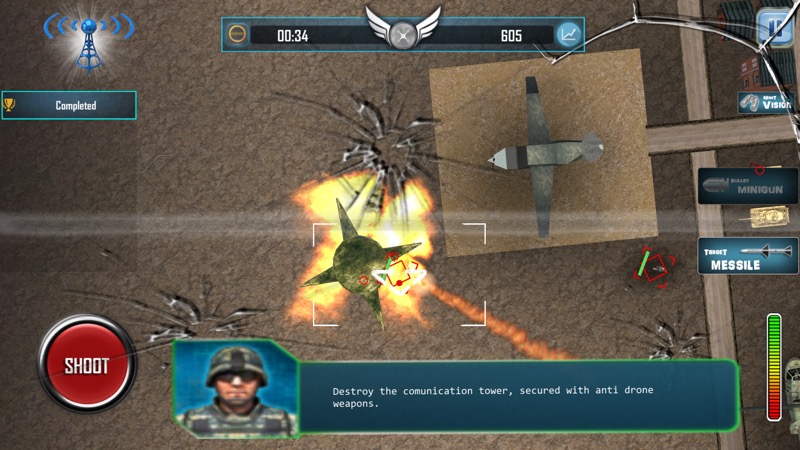 So you're choosing weapons and targetting and firing, all while the enemy gets your position and fires up nasty looking missiles of their own. It gets a bit frantic and the levels aren't easy. 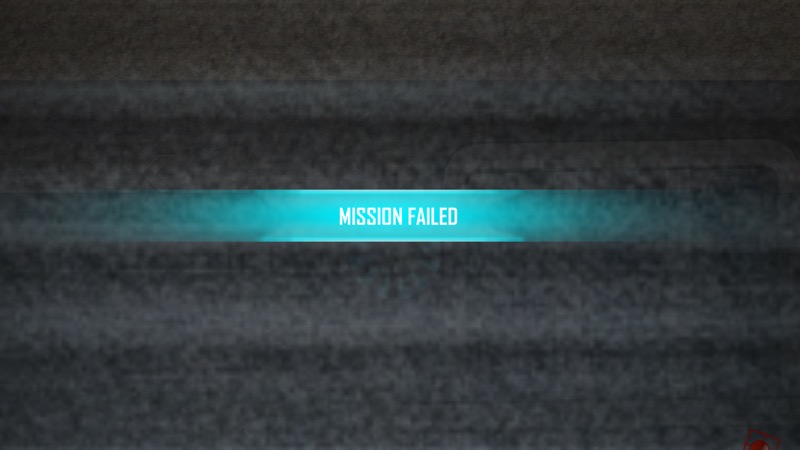 I did tell you. The camera view fuzzes out and the drone is effectively offline. Good thing there are no humans onboard?! 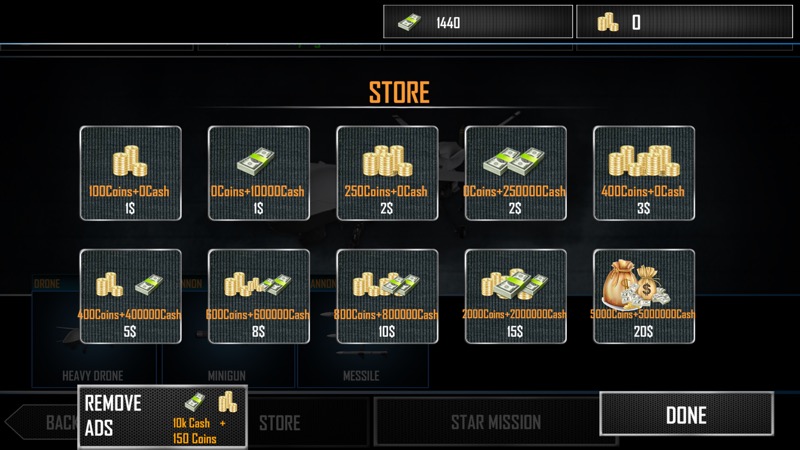 The key to getting very far, as with most freemium games, is to dip into the in-app-purchases to improve the effectiveness of your equipment. So weapons that cause more damage and can be fired faster (without a 'cool down' timeout), and so on.

Thankfully, the amounts asked for in the in-game Store, for the two virtual currencies (again, why do we need more than one? Can someone please tell me??), aren't huge. If you do the maths, it works out to $3 or about £2 to remove the annoying interstitial ads between levels, so consider this the baseline price for the game. Then (say) $10/£7 will get you enough currency to do some serious upgrading and get a lot further. Which is fair enough if you're really enjoying the title and having fun.

Ultimately, this is driven by numbers and in-app-purchases to upgrade your weapons and craft durability, but there's so much visual and audible action throughout, plus you do need some hand eye coordination for the targetting, so I'm going to give this game a qualified thumbs up overall.

As you might have guessed from the production values, this game has been on iOS and Android before, though it's only every now and then that a choice of font or layout gives the game away.

Obviously a free download from the Store here for Windows 10 Mobile, and for a change the freemium purchases aren't too swingeing, there aren't any of the 'crazy' pricing tiers from other software houses.