Spotimo UWP is now just about the last genuine* Spotify option open to people on Windows 10 Mobile, with Spotify WPW now removed from the Store and with the official Spotify (8.1) client no longer connecting with the service. Spotimo is sumptuous and fully working, but do note that it's still in beta, plus there's a playback tweak you'll need to apply before you can actually play music.

* of course, there's also Spodicast Music, but that's something of a kludge around YouTube, so isn't quite the same!

From the huge changelog for the new v1.4, now as an update in the Store.

All good stuff, though see below about disabling the web wrapper player, which won't work under Windows 10 Mobile. Introducing v1.4, the developer says:

New features are here! But you'll have to log in again... We promise it's worth it. Due to some big changes behind the scenes, your existing login data can't be reused after this update, meaning you'll need to log in again.

Spotimo is still in beta. Bugs are to be expected as the app evolves, and will get fixed over time. You can report bugs to me on Twitter @Arlodottxt, in the UWP Community Discord server or via email to spotimo@outlook.cui

This update is a huge step towards feature parity with the official client, and what I've managed is no small feat. Since Spotimo first launched with v1.3 in June, I've spent 150 hours on development. It's been a lot of fun, and a lot of work. Spotimo is completely free and ad-free (except for Spotify's audio ads), and I'd like to keep it that way. No fees, no popups, and no pay wall. That said, I enjoy working on Spotimo and put real passion behind it, but I can only get so far on my own. If you love using Spotimo, consider supporting me with a one-time donation, or by becoming a Patreon (which has perks!). Feature update 1.5 is already being planned. It'll be as big as 1.4, but it'll be several months before its ready. The more support I get, the faster I can make it happen. Until then, enjoy everything that 1.4 has to offer, and thanks for being a beta tester!

Here's the app in action, along with the vital playback tweak for W10M: 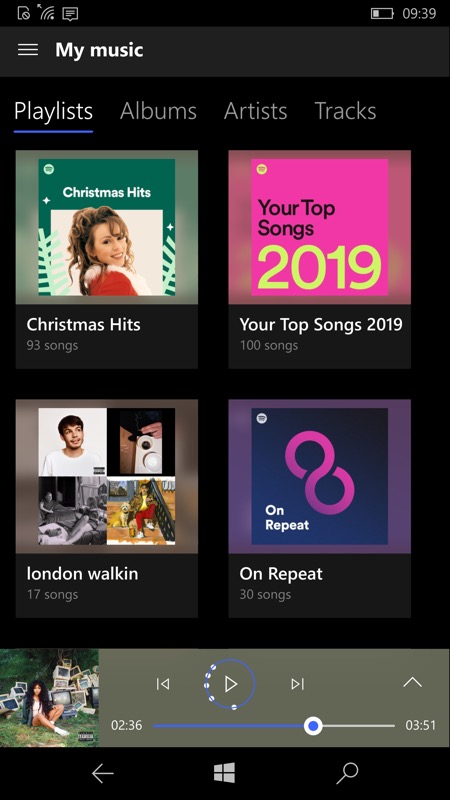 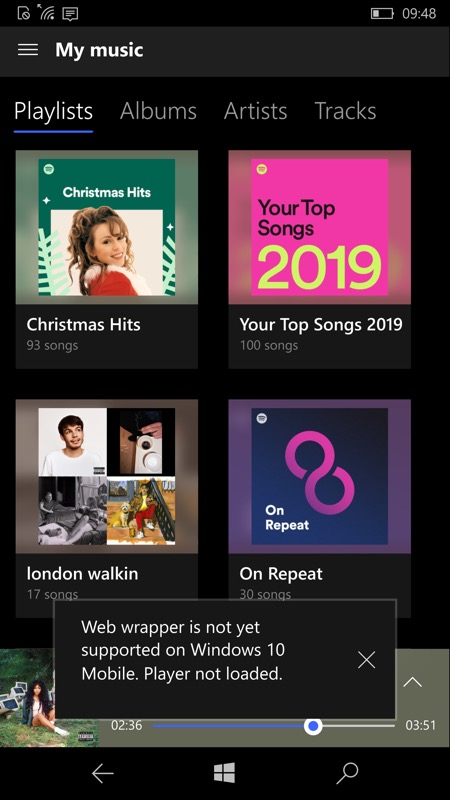 Spotimo v1.4 starts properly and login to Spotify works, but then there's no actual music, the spinning dots around the playback control go on forever. After a while (right), the pop-up seen here appears - it turns out that the experimental 'web wrapper' pane is the default, which is a shame as it doesn't work under the EdgeHTML version in Windows 10 Mobile, which is now quite old. However... 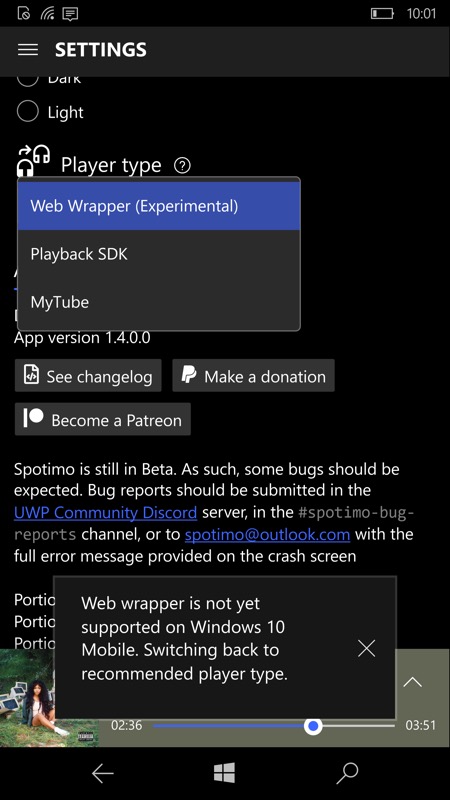 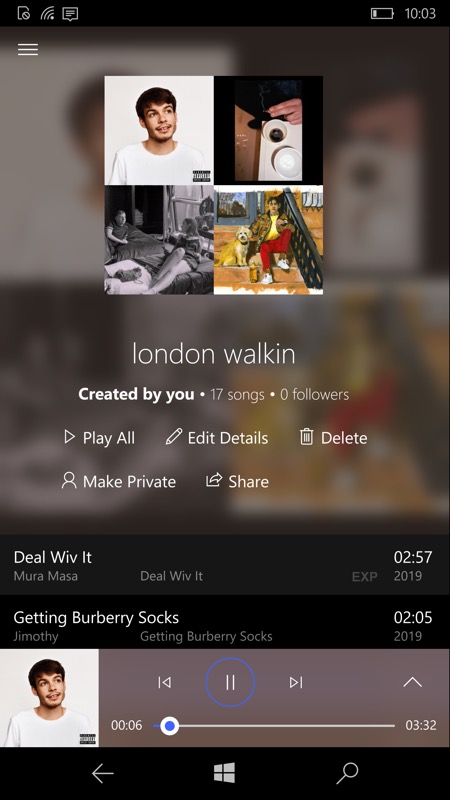 ... heading into Settings lets you change the 'Player type' back to 'Playback SDK', which is what Spotimo v1.3 and before used; (right) Happily, this works perfectly still and I was playing Spotify music from our family subscription in no time, as seen here.

You can grab Spotimo here in the Store. And you can support the developer here on Patreon.