Samsung and Microsoft were definitely cosying up at the Galaxy Note 10 launch event, and the replacement in Samsung Gallery of 'Samsung Cloud' with OneDrive is now rolling out, it seems, at least in Europe and for the Note 10 range. One would assume that other flagships from Samsung would also acquire the change/upgrade in the coming months.

In August, we announced that Microsoft OneDrive will begin powering the photos and cloud storage experience on Samsung Galaxy phones and devices. Samsung is now rolling out the new experience to Galaxy Note10 and Note10+ devices in Europe with the US to follow. Soon your Note10 will natively integrate OneDrive with Samsung Gallery to store your photos and videos in the cloud. When you store your camera roll with OneDrive, your photos and videos will be backed up, protected, and accessible from your phone, PC, Mac, and web browser. With your photos in OneDrive, you’ll won’t need to worry about losing a memory even if you lose your phone. 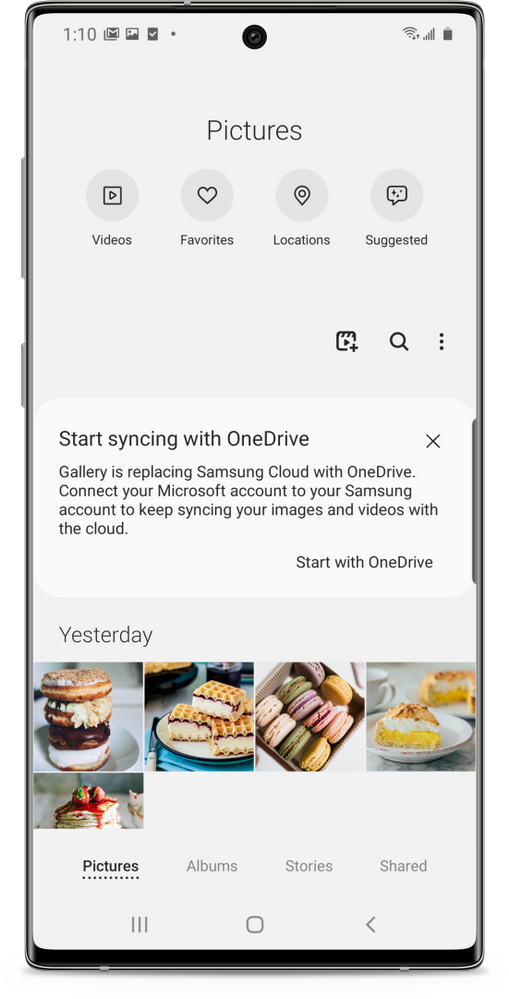 Of course, the usefulness of OneDrive as a cloud solution is nothing new to AAWP readers, and it's to be noted that anyone can grab the OneDrive app for any iOS or Android phone right now and enable camera upload, using the Photos view as your main image store. But the native integration with Samsung's Gallery app is notable in terms of reaching out to new users. And potentially lessening confusion, since there's now no need for them to also think about paying for 'Samsung Cloud' space.

(If anyone has already paid for Samsung Cloud then there's a scheme in place to offer a year's premium OneDrive space as part of the transition.)

One question is how far down Samsung's line-up this change will make it. I'm guessing it will be 'standard' on any device which officially gets the Android 10 update during 2020.

The integration is not yet on my Galaxy S9+ (itself on Android 10/One UI 2.0), but I'll keep a look out for it. One aspect which did make it onto current software builds is 'Link to Windows', which is now on the Samsung drop down quick settings shade. I'll do a feature on this in due course.