Back at the end of 2020, we featured myTube 4.0, the next-gen version of the best YouTube client for Windows 10 (Mobile) - and the developer teased a big 4.1 release early in 2021. Unfortunately, the developer worked so hard at the back end of last year that he's now beset by health issues, see the quote below. We wish him well, though note that v4.0 still works superbly - and in fact is the only UWP YouTube client that still works fully, so credit where credit's due.

From the developer this week:

I just wanted to update you on why there haven't been any updates to the public and beta versions of the app since late December, and why the 4.1 update will take longer than originally planned.

I believe I may have cubital tunnel syndrome in both hands. Extended activity with my hands (mostly typing) causes my middle and ring fingers to hurt and tingle, and in my left hand in particular it feels like there's a painfully tight string running from my elbow through my forearm to my wrist. This has been affecting my ability to work on myTube since late December, and I think it's time to go to the doctor and get it sorted out.

I've had minor, mostly ignorable issues with my hands since 2018, but it started becoming a real problem between October and December of last year as I was working overtime to finish the myTube 4.0 update before year end. Then at the end of December, I spent 13 hours working on another app before my hands had fully recovered from the time I spent on myTube, which I believe seriously injured my hands.

I couldn't type, I couldn't properly grip small objects, I had trouble unscrewing caps from bottled water, and my hands were constantly shaking. So I decided to take a break in early January to give my hands time to heal: no working on myTube or other apps, no video games, less texting, etc. By early February it felt like they had completely healed, just in time for me to start working at Microsoft a week later. But as my responsibilities at MS have been increasing leading to more and more typing, the pain has been gradually returning and is once again reaching a point where my hands hurt without any activity.

My original plan was to work on myTube over the weekend while I'm employed with MS. But as the pain increased, this went from working several hours each weekend, to working an hour or two each weekend, to not working on myTube at all the past two weekends. While my hands haven't regressed to the point where I can't type, I've decided it's best to rest each weekend, so my hands would be in better condition to perform my duties at Microsoft during the work week.

I'll make a doctor's appointment very soon, and see if I can receive some assistance in getting this sorted. For now there's no ETA on when myTube 4.1 will be ready, but hopefully it won't be more than a couple months. I'll let you know when I'm able comfortably work on myTube again.

And that's why myTube 4.1 is delayed and why there haven't been any small updates lately. My apologies to everyone who was hoping to get SponsorBlock support in myTube soon! Still, thank you for sticking around and using myTube :)

Pretty serious stuff, ad most of us have been 'there' at some point in our lives. Get better soon, Chris, and thanks for leaving us with a fully working client in the meantime! Here's myTube today: 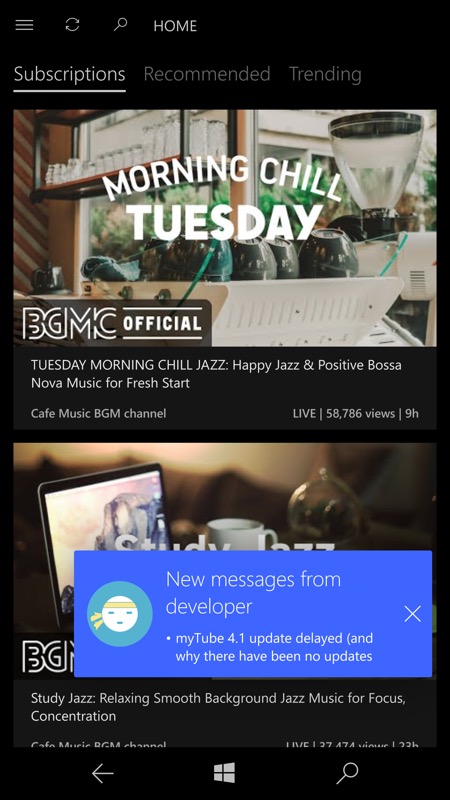 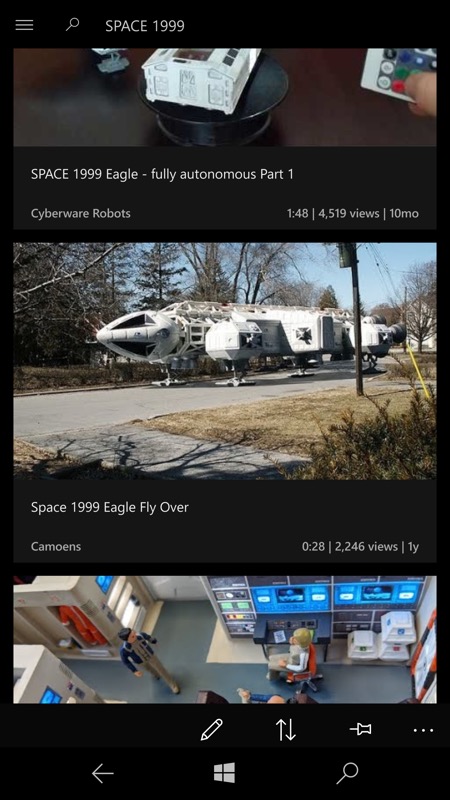 myTube includes a 'messages from developer' system and this was used today to pop-up the health news; (right) everything still works in the app, mind you, here I'm browsing one of my many YouTube playlists...