It's true that this gallery is somewhat out of time - the 'Alcatel IDOL 4S with Windows 10' has been out for T-Mobile in the USA since November 2016 and available SIM-free in the USA generally for around a month. However, AAWP is based in the UK and we've had no access to this new Windows 10 Mobile flagship... until now. Guest contributor (and ex-pat) Anthony Fear lives in North America and brings us an initial IDOL 4S gallery, ahead of more detailed review coverage.

The IDOL 4S with Windows 10 would be an interesting premium device even in a packed hardware landscape, but with Microsoft's withdrawal from the mainstream the IDOL 4S variant here stands out much more. In terms of new devices, the only big brand competition is from the enterprise-focussed (and far more expensive) HP Elite x3. Having been impressed by the IDOL 4S in one of its Android incarnations last year, I'm expecting to be impressed even more with the familiar Windows 10 Mobile under the hood.

Note that this gallery is of the IDOL 4S with USA LTE bands/frequencies - a European version has been much rumoured but not officially announced as of yet. You can still import the device here from the USA, but LTE data may not work at all, so you'd be reliant on 3.5G data. Not the end of the world, but worth noting at least. Plus you'd probably get stung for import duties at your national border! 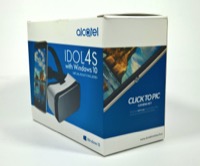 It's a big box - but then it includes a full custom (and deluxe) VR headset as standard - which is impressive value. Assuming you wanted to play with VR and needed a headset still, but hey.... 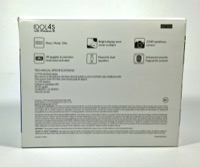 Confirmation on the box of the main selling points of the IDOL 4S with Windows 10, at least according to Alcatel. And nice to have to specs on the box - I wish all manufacturers would go to all this trouble! 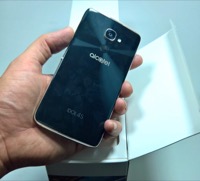 The first thing you see inside the box is the IDOL 4S itself - premium glass and metal - you can see why Blackberry picked this hardware for its DTEK60. And great to have it on Windows 10 Mobile too! 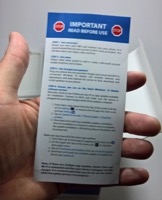 Now this is nice. A quick reference card, prominent in the packaging, giving a GREAT overview of the checks and updates a brand new user should do before getting to grips with the phone for real. Yes, it's frustrating to lose the first hour for Store/app/OS updates, but it'll all run SO much smoother from then on. Well done to Alcatel for putting this in the box and explaining things so well. Kudos.

And so to the VR headset, which consists of a back cover to keep all the cables and gubbins in, plus the headset (with lenses/buttons etc.) and then a front cover that goes over the IDOL 4S itself when you don't need the phone's camera in the particular VR use case. It's all very well thought out.

Looking inside the VR headset - the yellow tabs show that you have to peel off the lens protectors before first use - it's amazing how many people leave these on by mistake!!!

The camera bump on the back - needed because the premium glass body is incredibly thin! Judgement on the IDOL 4S (in Windows guise) camera will have to wait for a few days....

The side view reveals just how thin the IDOL 4S design is. Yet it's strong and premium. Your only concern will be gripping it in the hand, so a case is in order (foiling the point of making the phone thin in the first place, yada yada....!)

With the card tray ejected, with space for a microSD card to expand the already large internal storage, plus a nanoSIM...

Down at the bottom, showing the (Continuum compatible) USB Type C port and one of the rear speaker ports. The actual stereo speakers are large and face forwards, but there's enough sound escaping backwards to make these slightly cosmetic speaker 'grilles' worthwhile.

Finally all booted up (and ready to check for updates - see above!) - this is the IDOL 4S in Windows 10 Mobile guise... 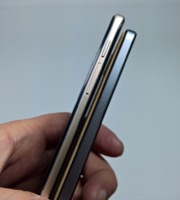 Comparing size and profile with the Lumia 650 - slightly longer and slightly thinner. Both very sleek metal builds though.

Comparing the IDOL 4S again side by side with the Lumia 950 XL (left) and Lumia 950 (right), this time (obviously) from the back and note that the two Lumias are with Mozo backs in place...

Looks good so far then - Anthony (Fear) will have more on this new Windows 10 Mobile flagship in due course. And see also my own camera testing with the IDOL 4S in its Android form - I'm hoping the Windows 10 version will perform a whole lot better, thanks to the maturity of the Windows 10 Camera app and its algorithms.