Exploring the imaging improvements in Nokia Black for the Lumia 1020

Released yesterday was Nokia Black for the Lumia 1020 - at least for the AT&T variant over in the USA. Especially interesting is that Black incorporates a number of important improvements in image processing for the camera, begging further detailed investigation. Happily, we have both AT&T and generic Euro variants of the 1020 to hand, so it was easy to set up some test shots and see what Nokia has changed in terms of 'noise reduction and tone mapping' in going from Nokia Amber to Nokia Black and the way these interact with the class-leading camera hardware. 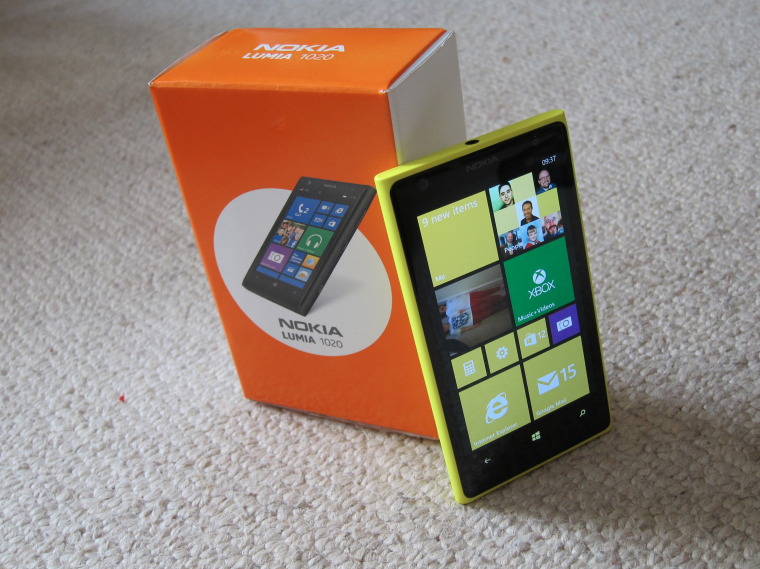 Now, obviously, with using two different phones to do a back to back camera comparison isn't perfect - you can't totally discount minor variations in component quality in the manufacturing process - but both were full retail units and not prototypes, so I think we're fairly safe at drawing conclusions.

In each test scene, I've shot it from the same spot with full auto settings with each 1020 version, and show the overall scene, scaled down, before cropping (at 1:1) the centre portion of detail and putting up our famous interactive comparator. Bandwidth permitting, give the page a few seconds to load completely and then you should be able to use your mouse or laptop pointer to drag between the two photos in each case, exploring the details.

For those interested in the EXIF data in the original shots, I've hyperlinked the JPGs above each comparator.

In this case, simply shot across the suburban rooftops in rare winter UK sun(!) Here's the full scene: 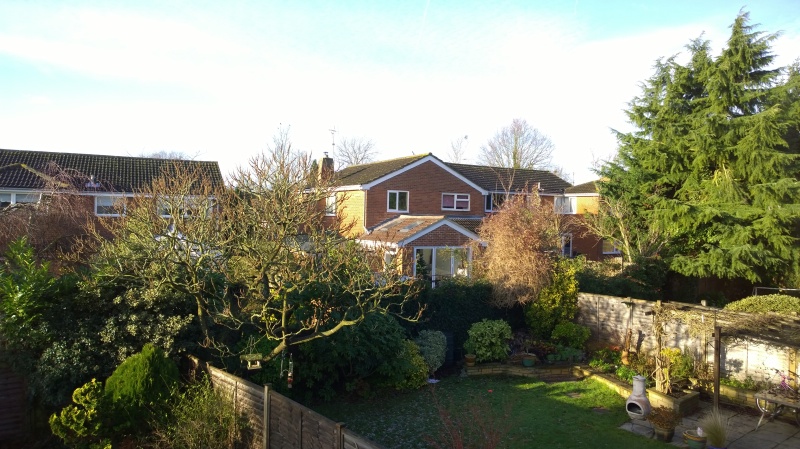 The pre-Black photo from the Lumia 1020 is on the left, the post-black one on the right, as labelled. Again, move your mouse over the scene to move between the photos: 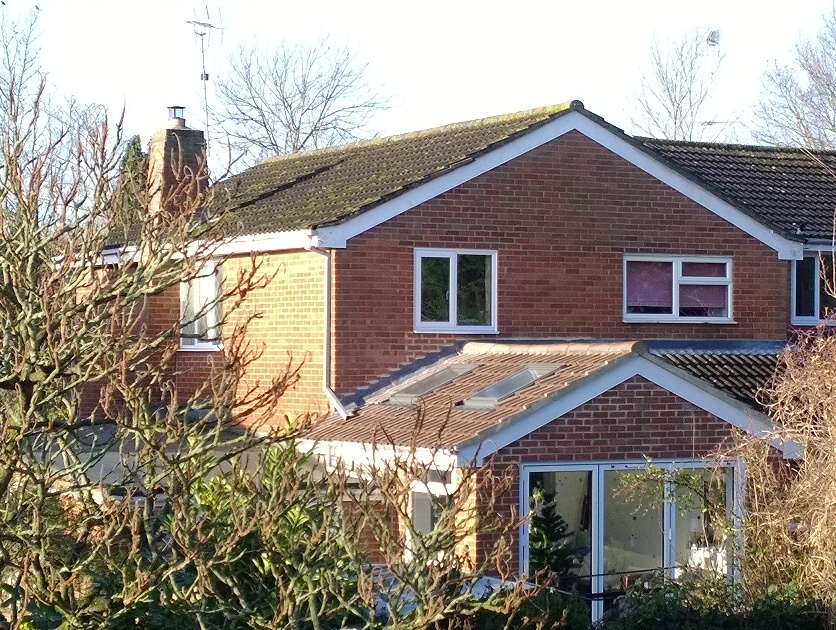 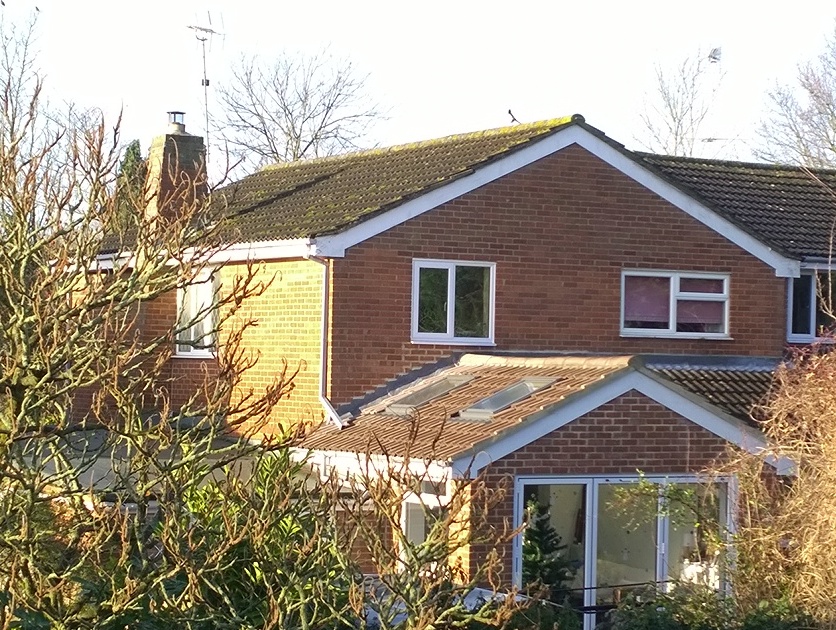 In case your eyesight isn't 20:20 (and goodness knows mine isn't!), here's a deliberately magnified crop from the two images above, again Nokia Amber on the left, Nokia Black on the right: 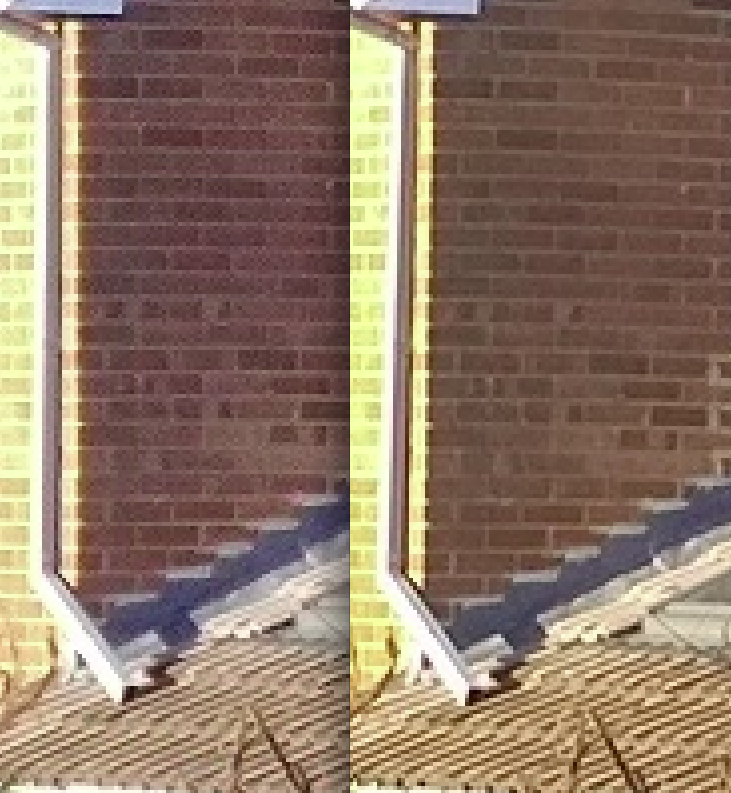 Whatever your eyesight's like, with this degree of pixel magnification you can hopefully see that there's a dramatic difference in the noise handling and colouration. Look at the bricks - the Nokia Amber version has them over-red and full of 'noise', the Black version has the bricks the right colour and the noise has been significantly reduced, with almost no loss in actual detail.

It's not clear whether Nokia has applied noise reduction algorithms or merely dialled back the sharpening ones, but either way, I prefer the result. See also the grey flashing, which appears almost purple under Nokia Amber, plus is overly 'noisy'.

The sun was up, but only just, light levels were quite low and my car auto-activated its headlamps. Here's the full scene: 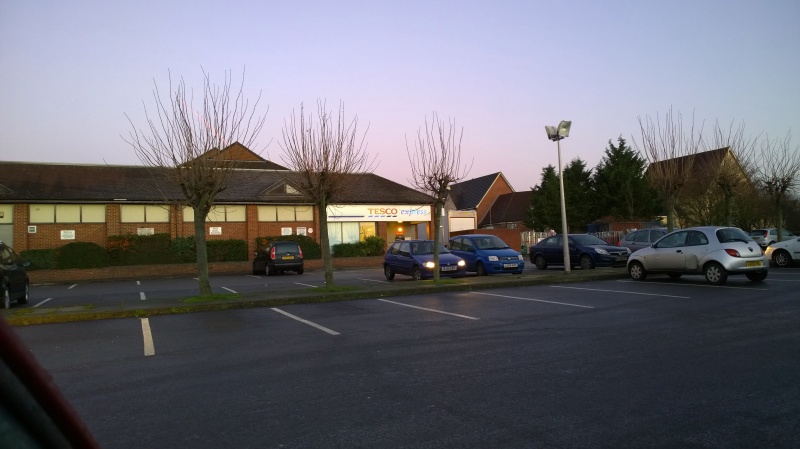 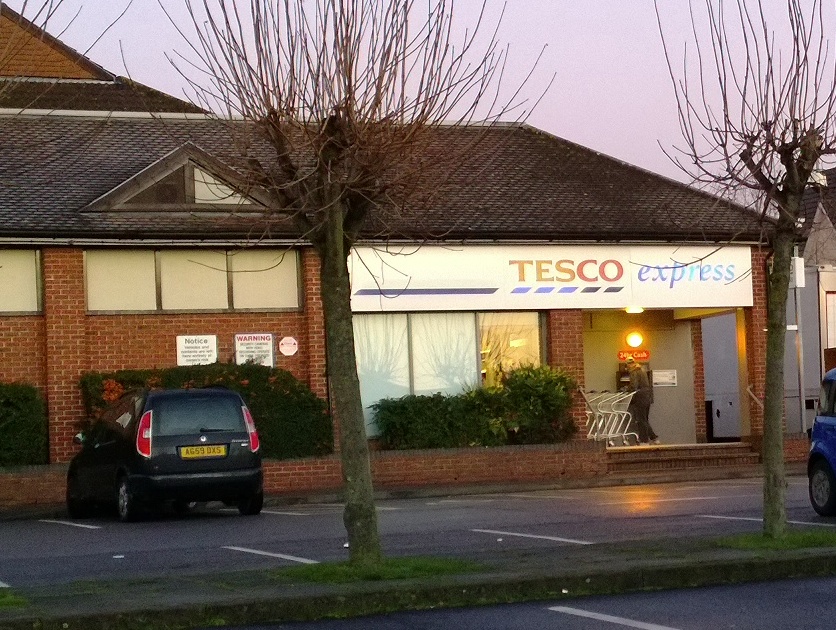 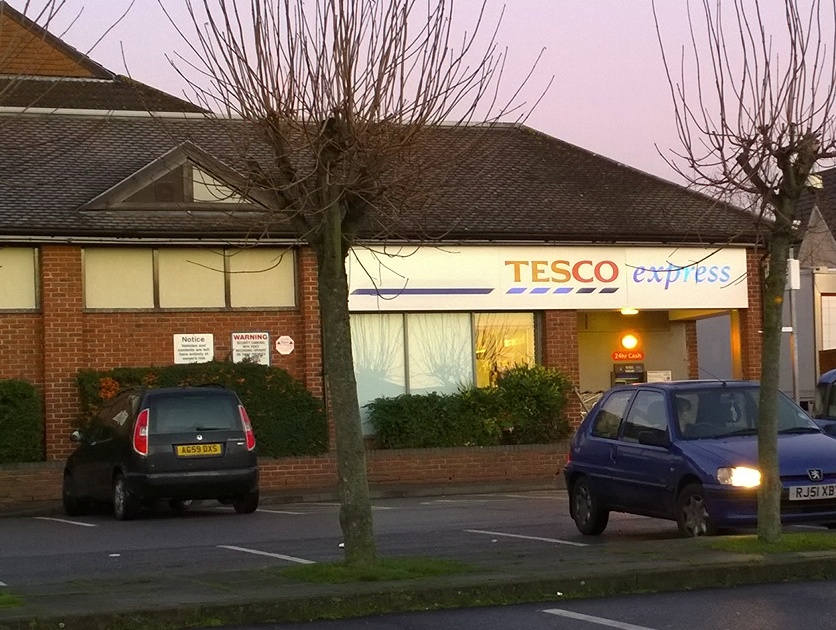 Again, to help you see the difference, here's a deliberately magnified crop from the two images above, again Nokia Amber on the left, Nokia Black on the right: 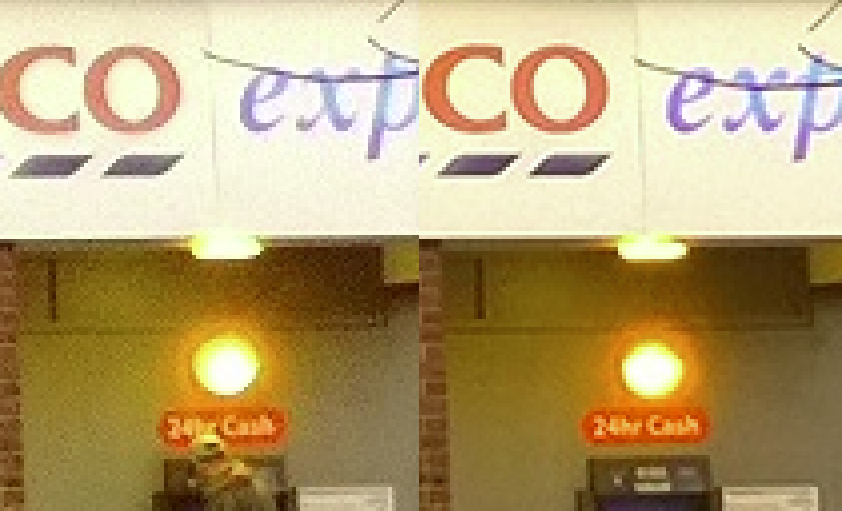 I realise that we're having to look very closely to see differences here, but anyone owning the Lumia 1020 will be after the best images possible, so I make no apologies for labouring the point here.

Look at the darker area above the cashpoint and light - see how the digital noise is massively reduced in the Nokia Black imaging algorithms. In fact, the 1020's images, with this update, get close to the 'pure' images from the older Symbian-powered Nokia 808 - but that's a comparison for another day.

As someone pointed out in the comments below, if you grab the original JPGs and look in the EXIF data, you can see that Nokia has tweaked the ISO chosen for low light photos, using a lower value, which also helps the result have lower noise.

In this case, a 'selfie', with the overhead fluorescent strip being bright enough that the Xenon flash didn't need to be fired. Here's the full scene: 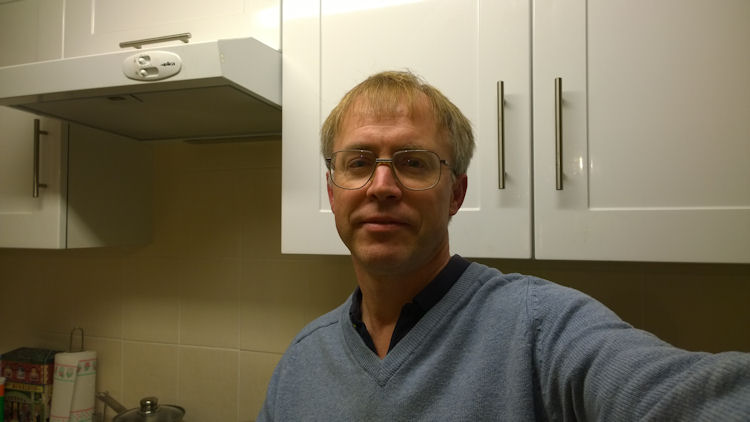 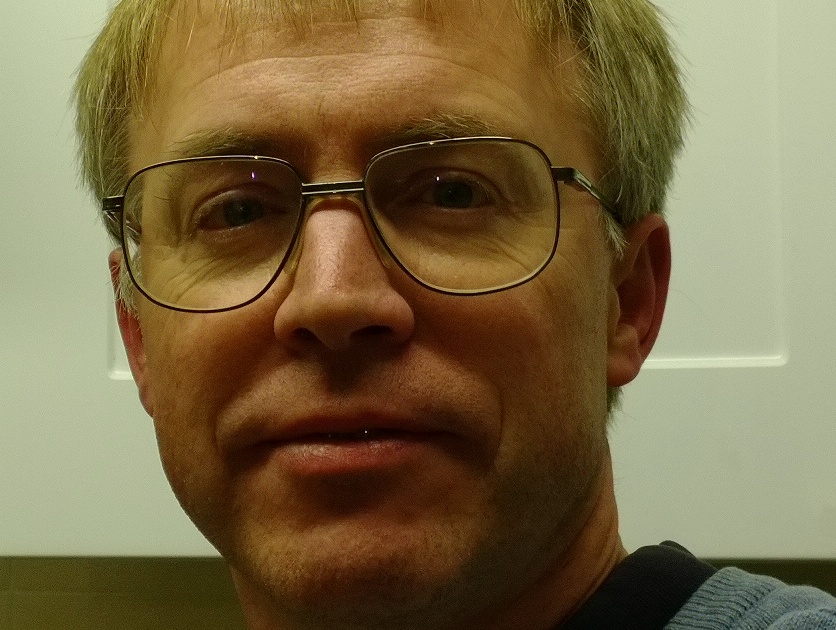 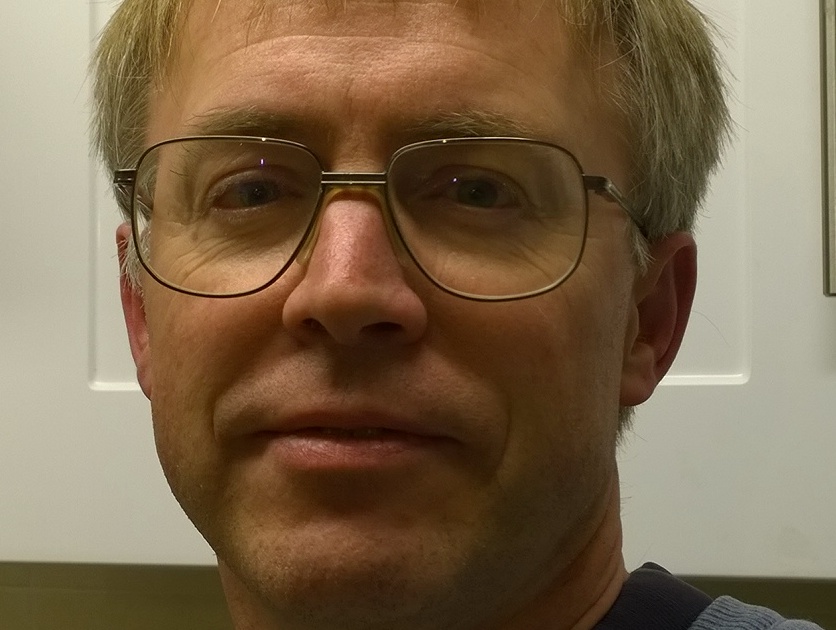 One of the biggest complaints against the Lumia 1020's camera, for those being picky, was that in low light conditions the detail was there but a slight 'yellow' colour cast tended to exist where it didn't in real life. You can see this above, with the Amber version of my (ugly) mug having a distinctly ruddy complexion and colouring which wasn't that accurate. In contrast, the Nokia Black-shot version has incredibly accurate colours, it's like (for me) looking in a mirror(!)

In this case, a corner of our kitchen, with table lamp and tree lights only, focussing here on the DAB radio. Here's the full scene: 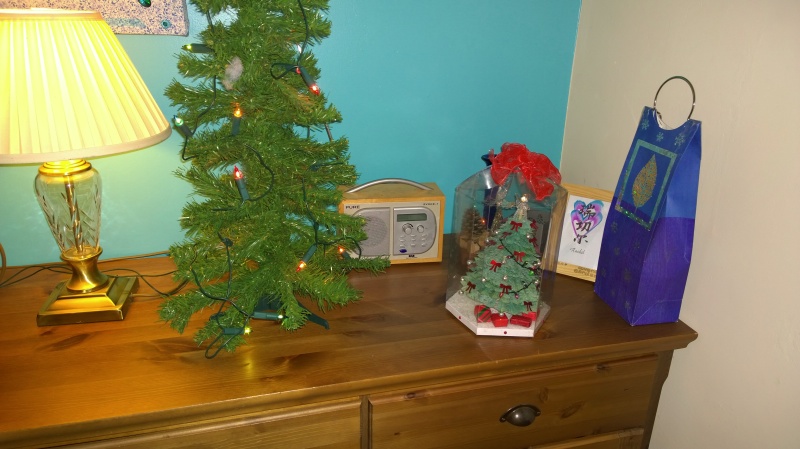 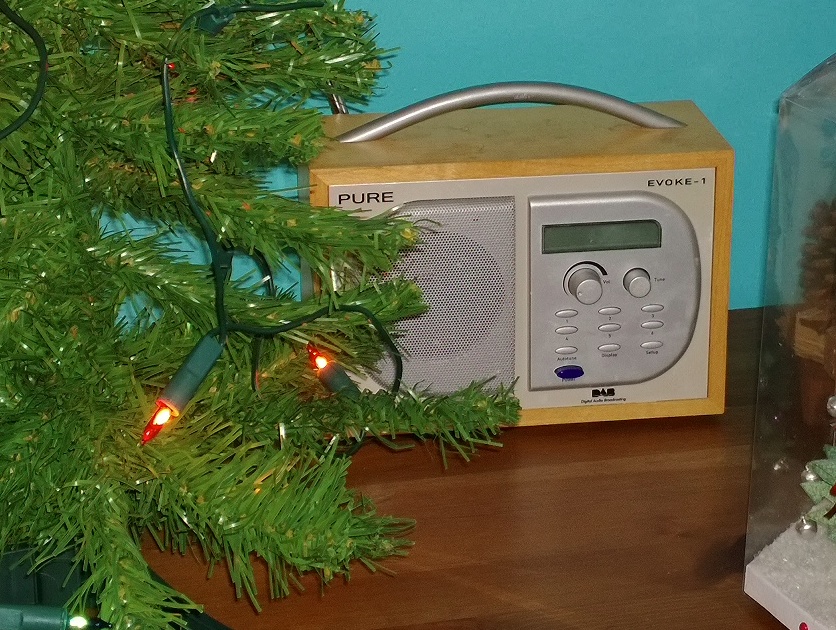 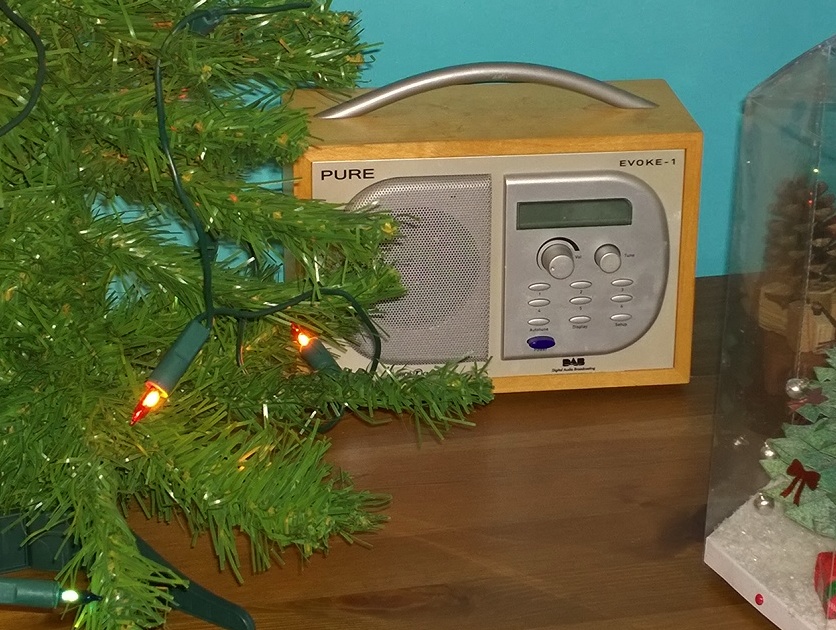 There's little difference between the shots here in terms of detail and noise (though again the Black version is slightly 'cleaner'), but I did notice greater colour accuracy in the latter, in that it gets the colour of the wooden cabinet perfectly, whereas it's too 'red' in the Amber-shot version.

Not obvious from the images here but also significant is that the general reduction in digital noise in the 1020's images (which were, famously, 'optimised' for detail rather than a compromise across all attributes) results in JPGs produced by the Black firmware on the 1020 being roughly 10-15% smaller in byte size. In other words, photos are 'purer', will be faster to share/send, and will also take up less space on your phone memory.

It should be emphasised that the Nokia Lumia 1020 camera hasn't exactly been under-achieving - it wins just about any smartphone camera shootout it even gets a sniff at. Yet there was always a feeling that the hardware was stellar but that something in the image processing wasn't quite 'right' under certain conditions and for certain subjects.

The Nokia Black update, as far as I can see, takes the Lumia 1020 camera to the next level again and will further distance it from any competition. Less noise, more accurate colours, purer photos and smaller file sizes all mean that the best just got better.

Comments welcome - how big of a difference will this make to your Lumia 1020 photography when the Black update hits worldwide 1020s in the next few weeks?

PS. It's worth noting that the speed of processing images from the 41MP sensor hasn't changed - this is clearly limited by processor speed - though is faster on the Lumia 1520 with its faster processor and smaller sensor, as Rafe has demonstrated. When you're after a perfect photo though, a few seconds is neither here nor there, plus there are the Smart Cam and default Windows Phone Camera modes if you really need fast shot to shot times for a specific subject.

PPS. Also enabled by the switch to Nokia Black is 'RAW" capture and I used this for the Christmas scene immediately above, shooting a 40MP RAW file as well as the oversampled 5MP JPG. If you're a photo-geek and fancy playing with this file then feel free to grab it here as scene-raw.dng - it's huge though and you'll need a meaty desktop and specialist software in order to be able to do anything with it.

PPPS. Has anyone else noticed that the code name for the current generation of Nokia firmware, 'Amber', is the name for a shade of the colour yellow? So perhaps it's only natural that a slight 'amber' cast crept into the photos! We should perhaps just be glad that photos under 'Black' don't end up underexposed, i.e. 'Blacker'! [/joke]

Filed: Home > Features > Exploring the imaging improvements in Nokia Black for the Lumia 1020