How to: Browse and upload to Flickr Groups from your Windows Phone

I can offer no explanation for why the official Flickr client for Windows Phone has been allowed to languish in an almost unusable state [I blame Yahoo, Flickr's owner]. I can however explain how to use the popular 2flicka client to both browse Groups and then upload your own photos to them. In other words, you can fully contribute content to Flickr groups from your smartphone.

Flickr is the oldest photo-storing and sharing site on the Internet - and it's still the best, I'd argue, with your full resolution shots stored and available (while many other sites downsample everything horribly to 2004-spec VGA quality or similar) and with original EXIF data from your photos available to anyone who wants to see the settings you used. Flickr is a fabulous resource.

Groups, as the name suggests, are communities of people on Flickr sharing photos around a particular theme. For the purposes of this tutorial, I'm going to use the Phones Show group on Flickr, created late last year for purely phone-taken photos and already up to 2000 photos from 200 members.

There are many ways to get a photo from your phone onto Flickr, i.e. into your main photo stream, or even into a 'set' (e.g. "Mike's wedding"), including sending it by email to a special address. But getting a photo not only onto Flickr but also into a Group, all from your Windows Phone - that's harder. But can be done with 2flicka.

We last covered 2flicka here, talking about the latest in an impressive series of updates - yes, 2flicka is commercial, but it's the best pound or so you'll ever spend. Go on, give the developer your support - 2flicka is available here.

Here then is how to browse, interact with and then add to Flickr Groups, using 2flicka explicitly. If another decent Flickr client comes along for Windows Phone then we will, of course, cover it.

On starting 2flicka, you'll see photos from any Flickr 'friends' and from the wider Flickr community. You can swipe across the panorama, to see your own previously upload photos, as you'd expect: 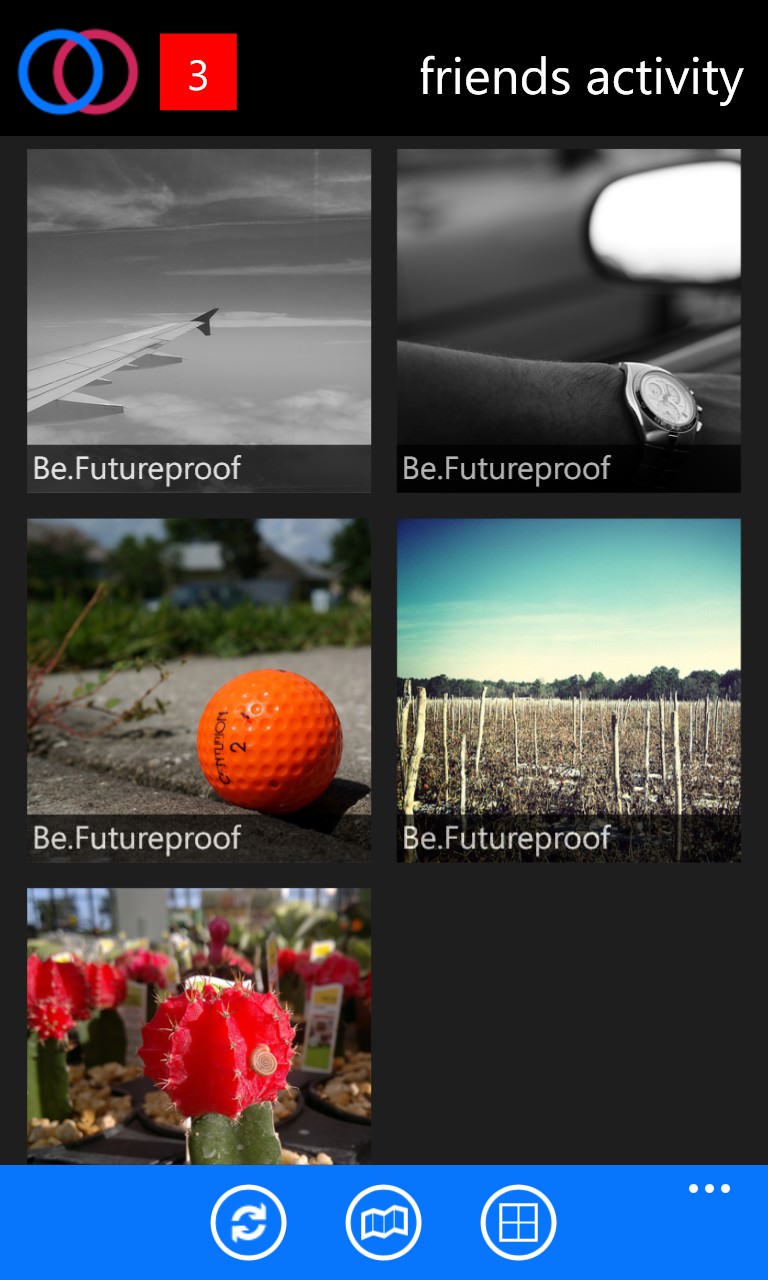 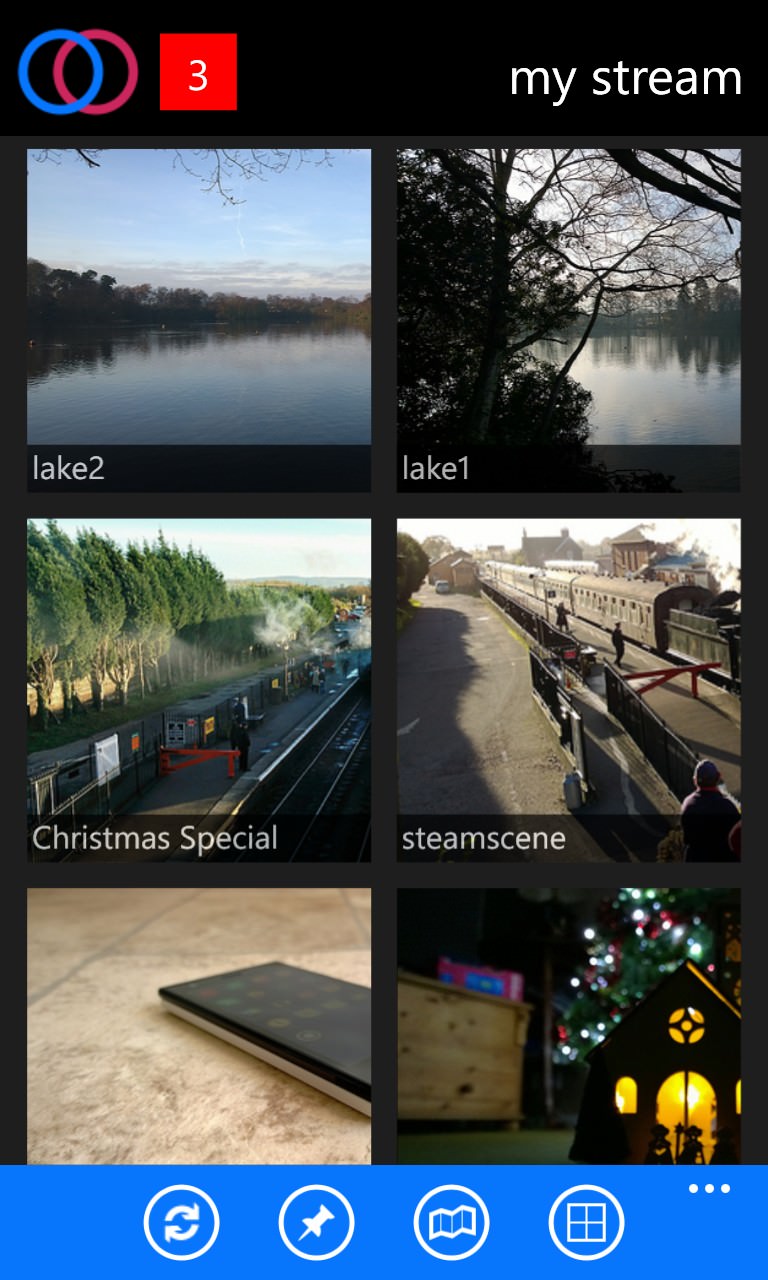 The red number at the top is for notifications - people who have liked something you uploaded or added a comment - tap the number to see these, if you like.

Swiping across the panorama (or, starting from the 'home' page, swipe over to the left!), you'll come to a textual menu, containing 'my groups': 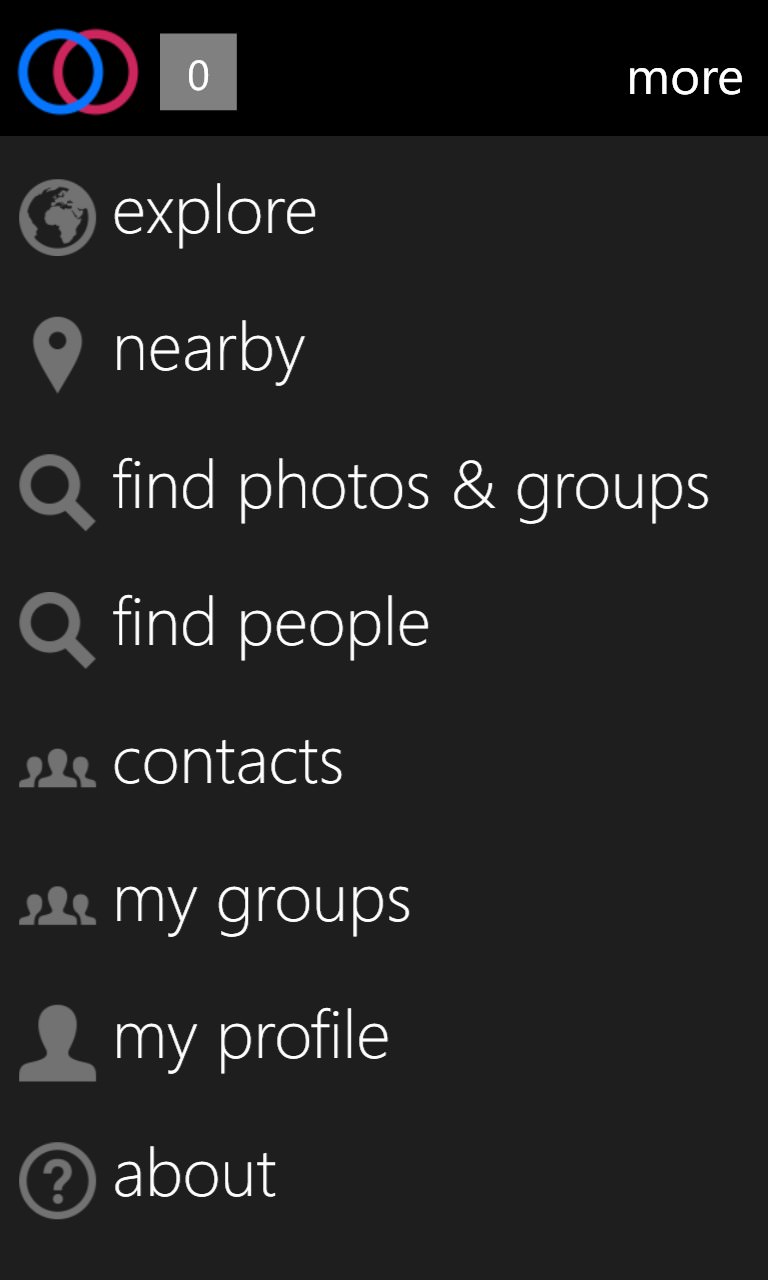 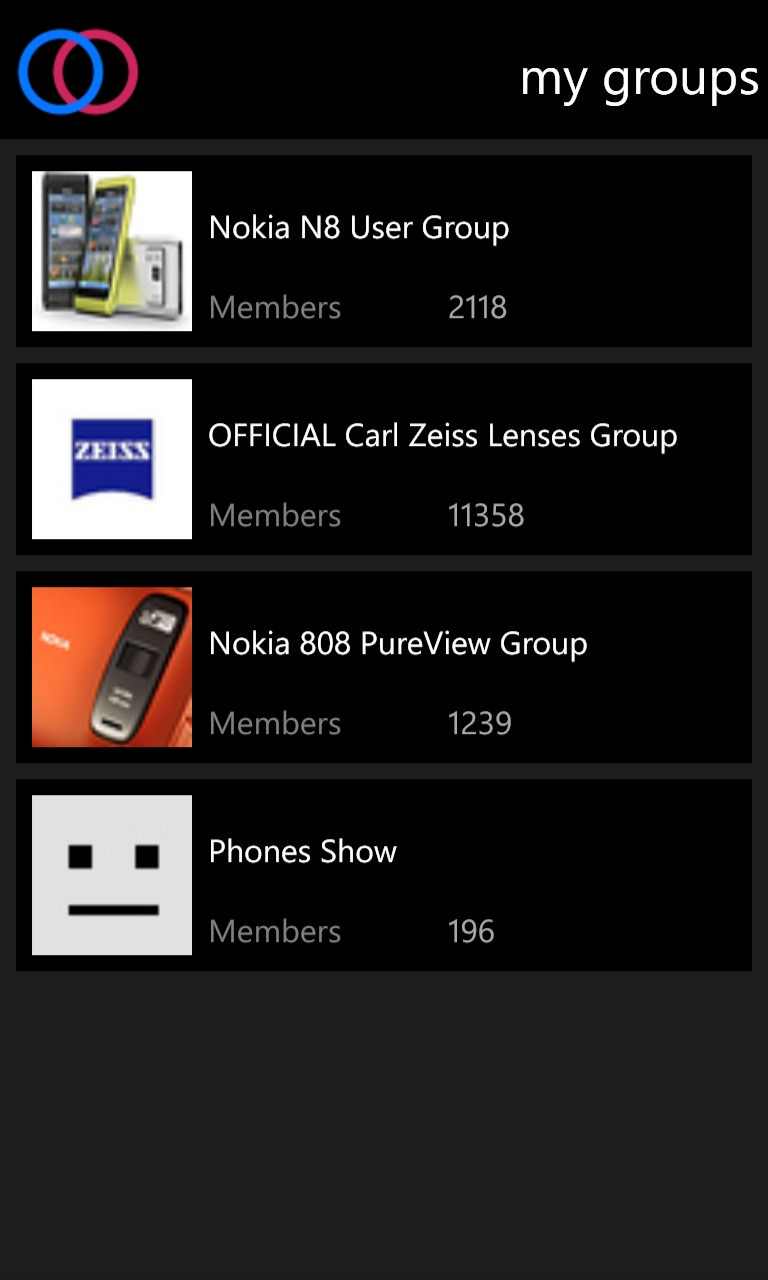 Here it's showing that I'm a member of four Flickr groups, including the one I mentioned above for the Phones Show. Tapping a group brings it up for browsing: 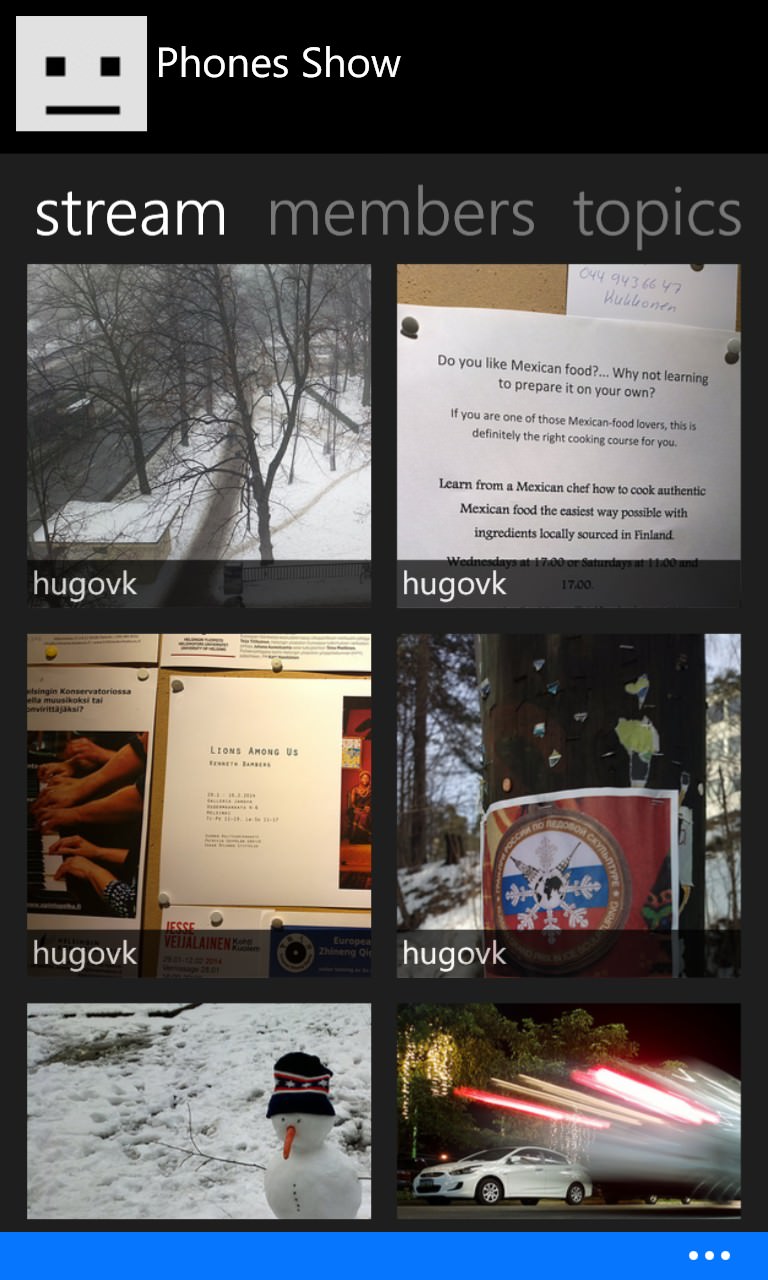 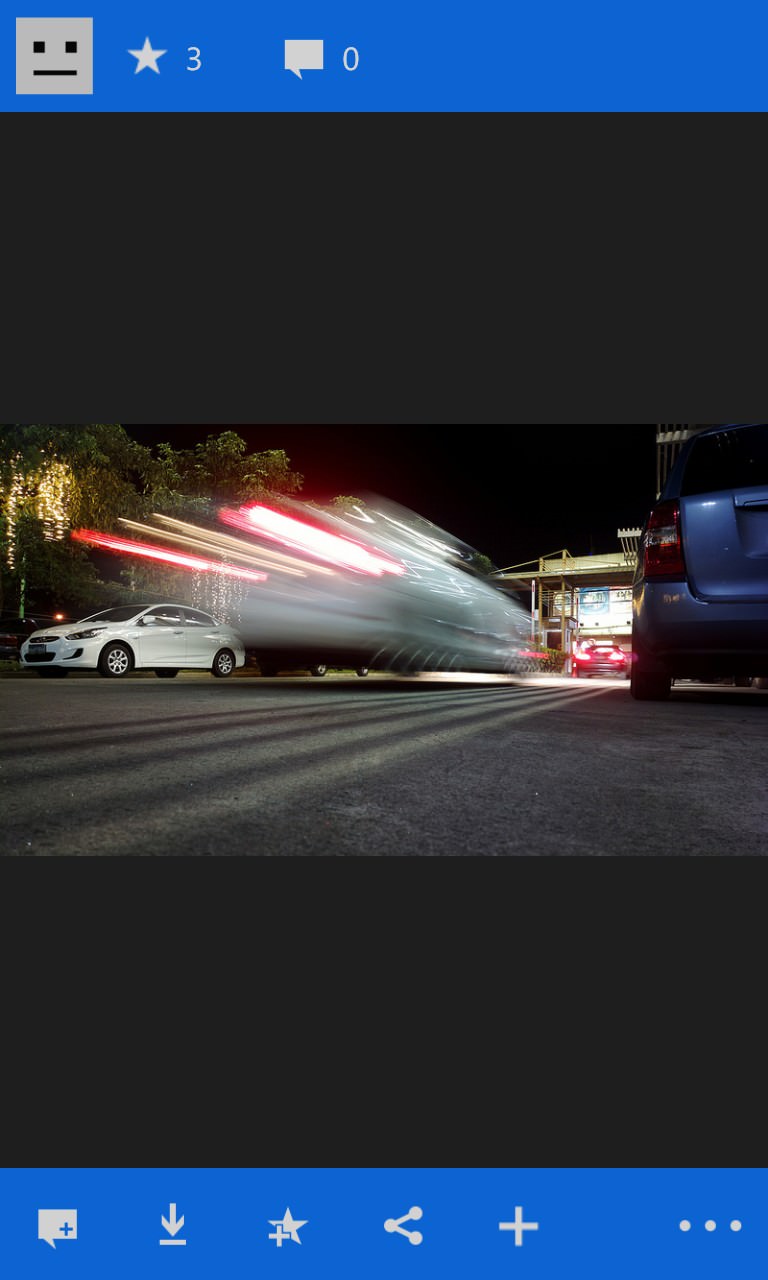 Tap any photo to bring up its own unique page, along with actions and basic stats, as shown above right. Looks like three people have added this image as a favourite but there aren't any comments yet.

It's a great slow shutter speed photo (taken on a Nokia 808 PureView, the Lumia 1020's predecessor) and you can multi-touch zoom in, in the usual way: 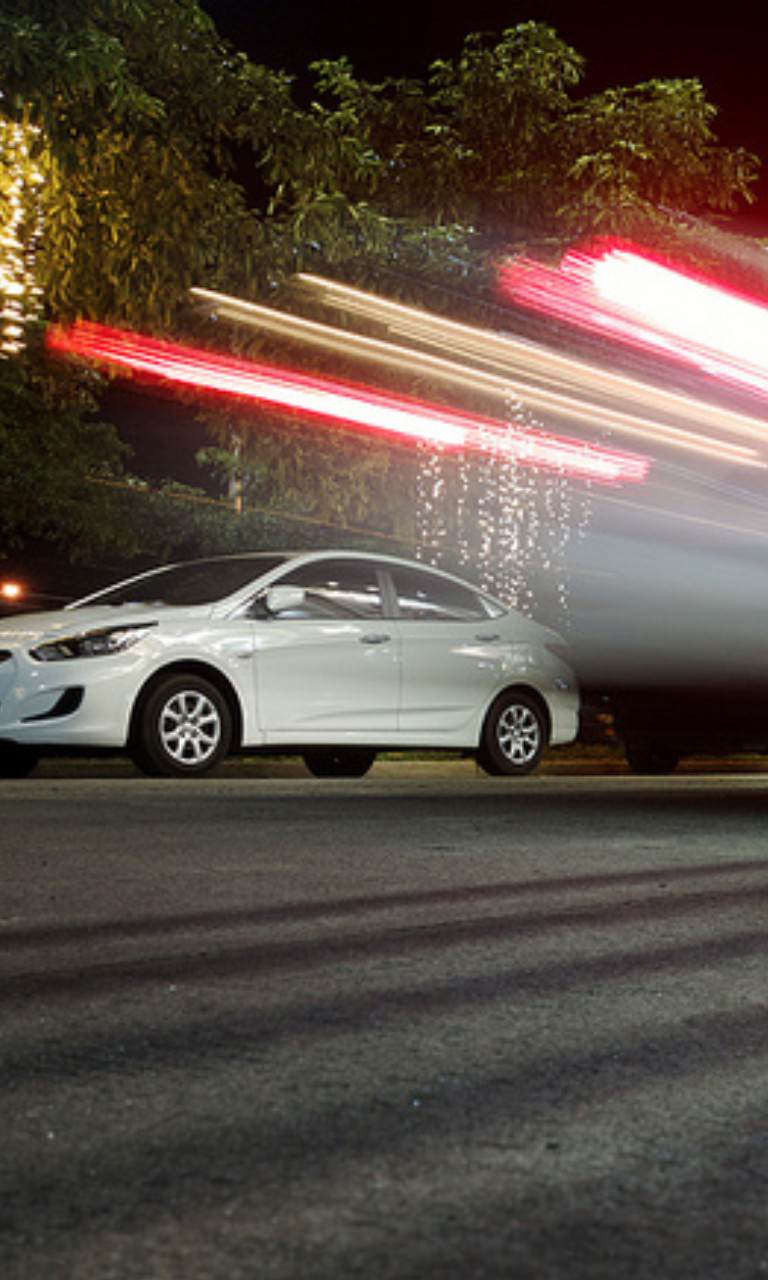 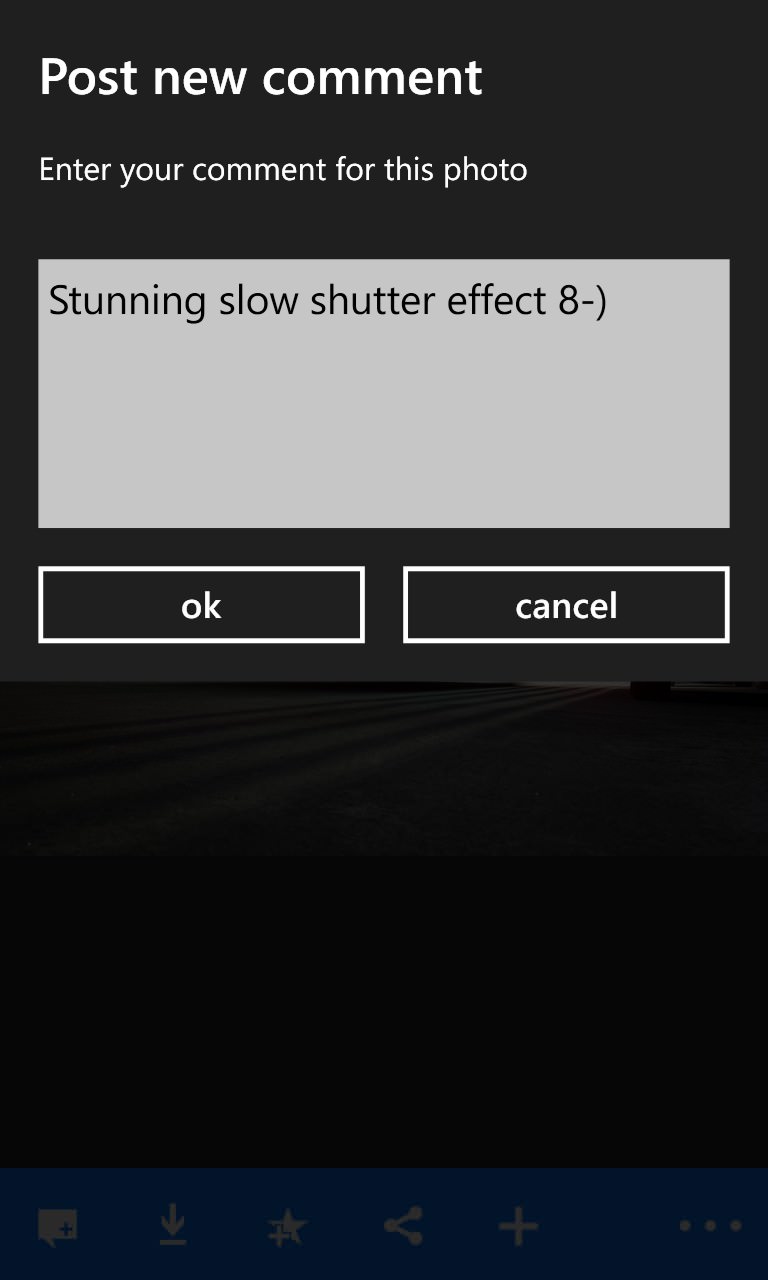 Or indeed, download the image, add it to your favourites, share it on, or (as here) add a comment (using the bottom left tool, a couple of screenshots above). Once commented on, you'll see your addition register on the stats bar for the image. In fact, the photographer replied to my comment a couple of hours later, as you can verify here. 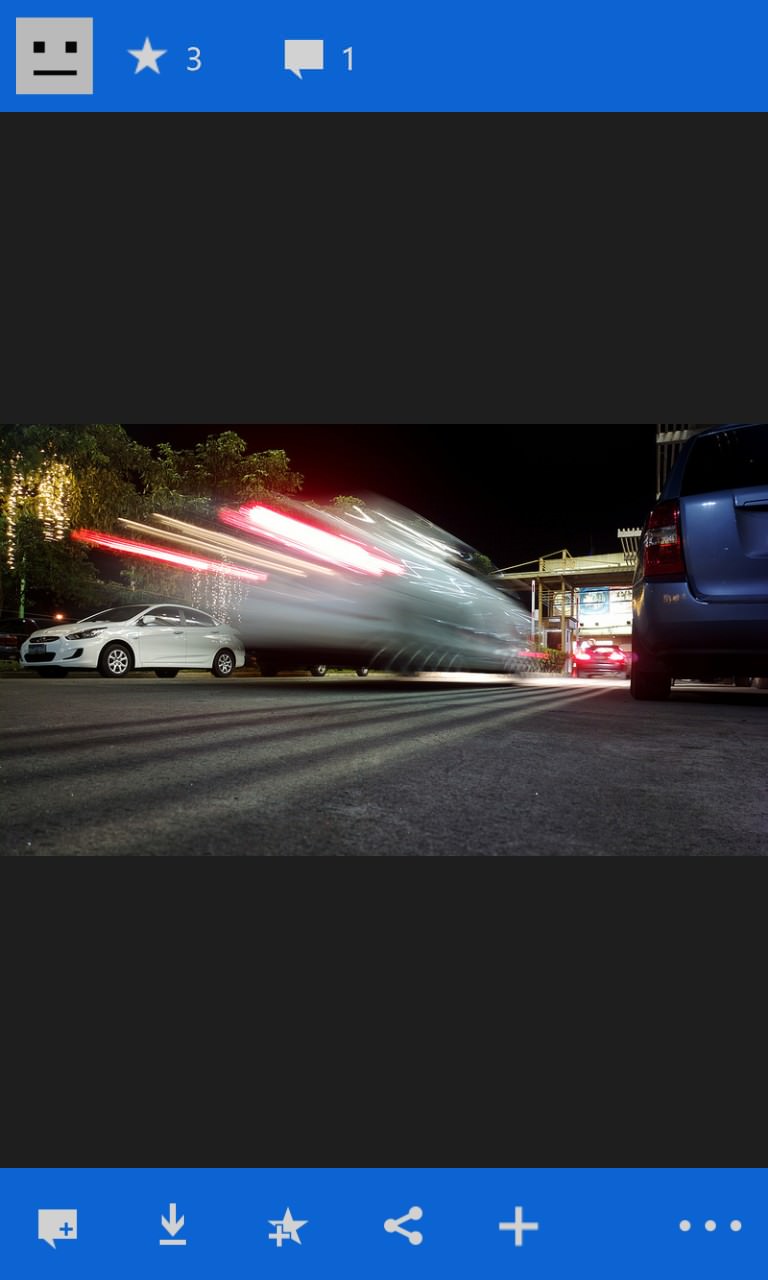 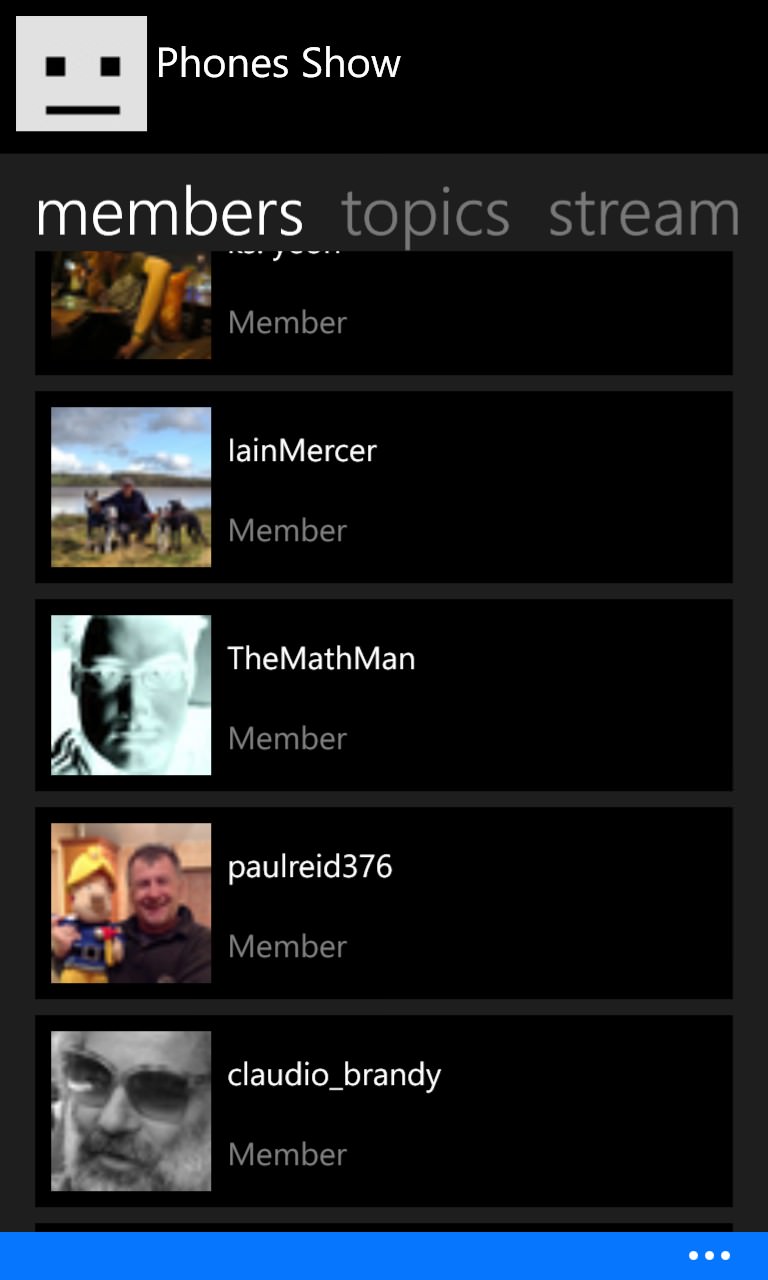 From the Group's home page ('stream'), you can also swipe across to browse discussion topics (though you can't add or comment here in 2flicka yet) and even browse all the Flickr members in the Group: 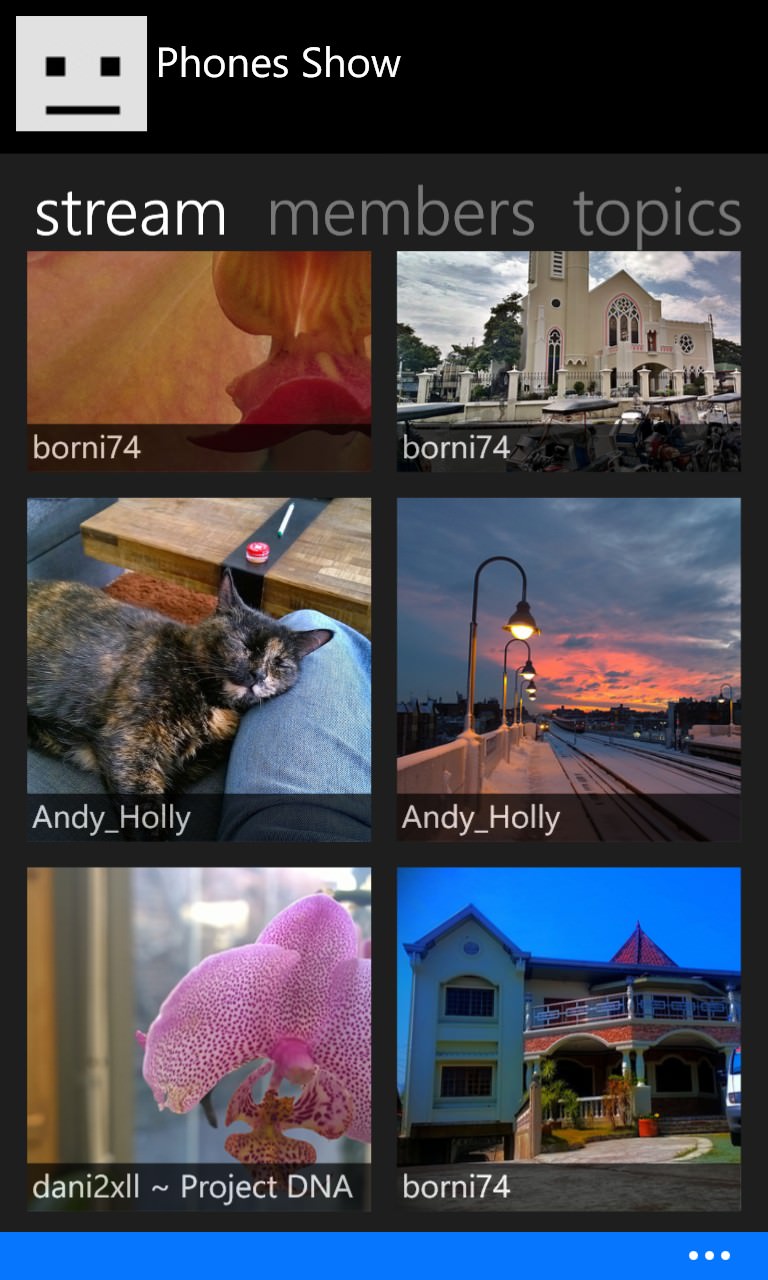 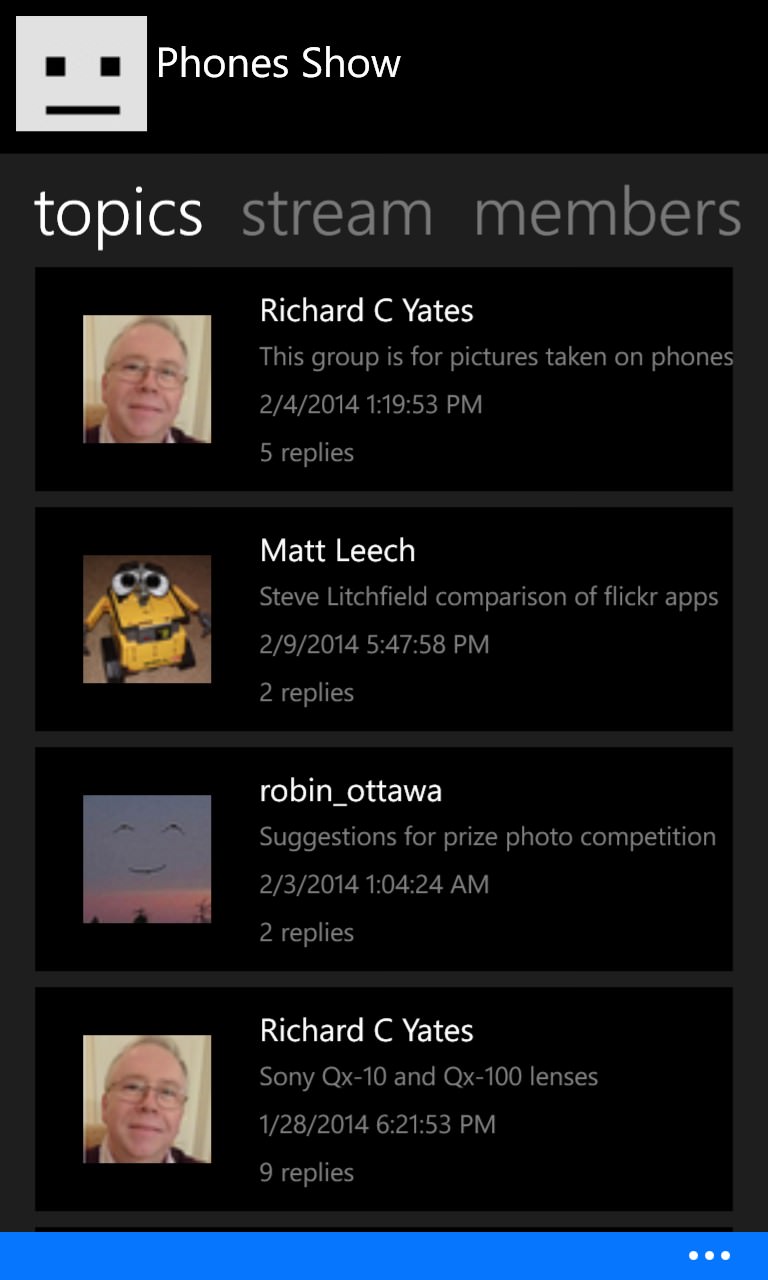 Time to think about getting one of our photos up onto Flickr and into the group though. If you already have a particular photo in your stream on Flickr then you'll just need the last few steps below, but let's take it from first principles for the purposes of this tutorial. 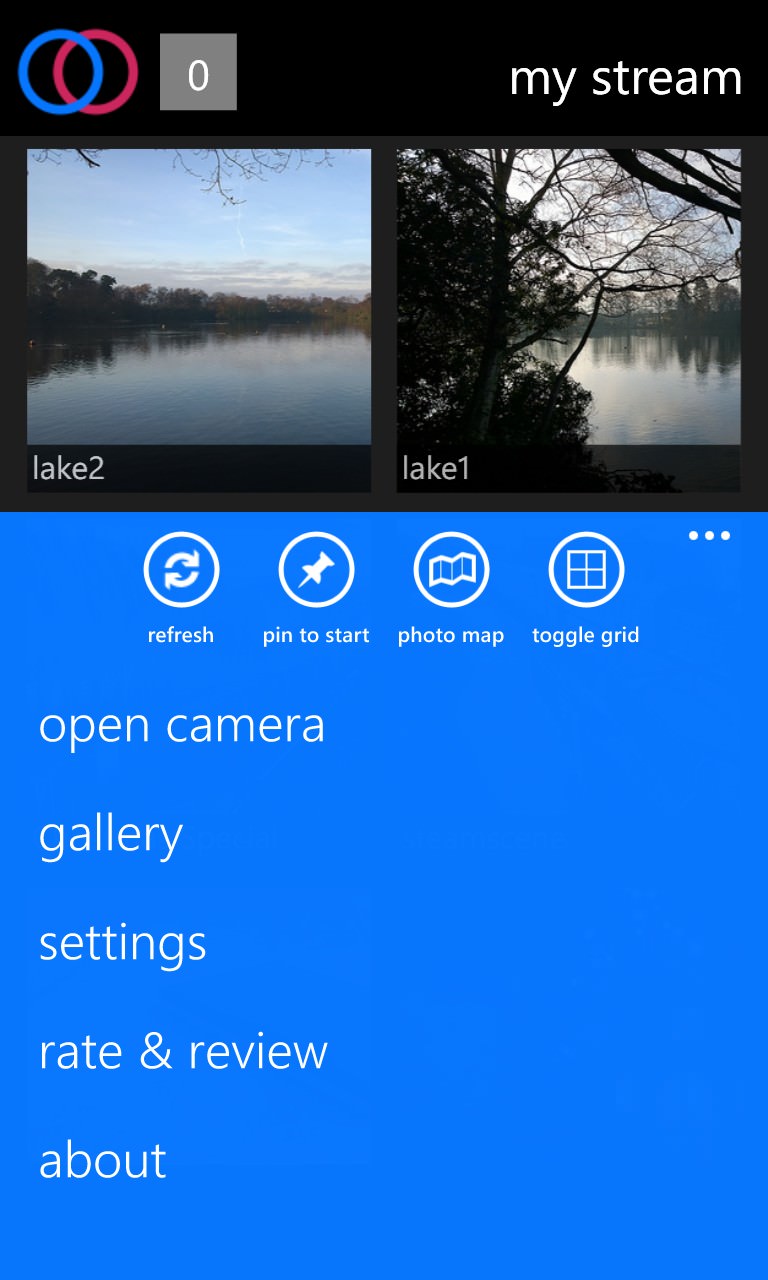 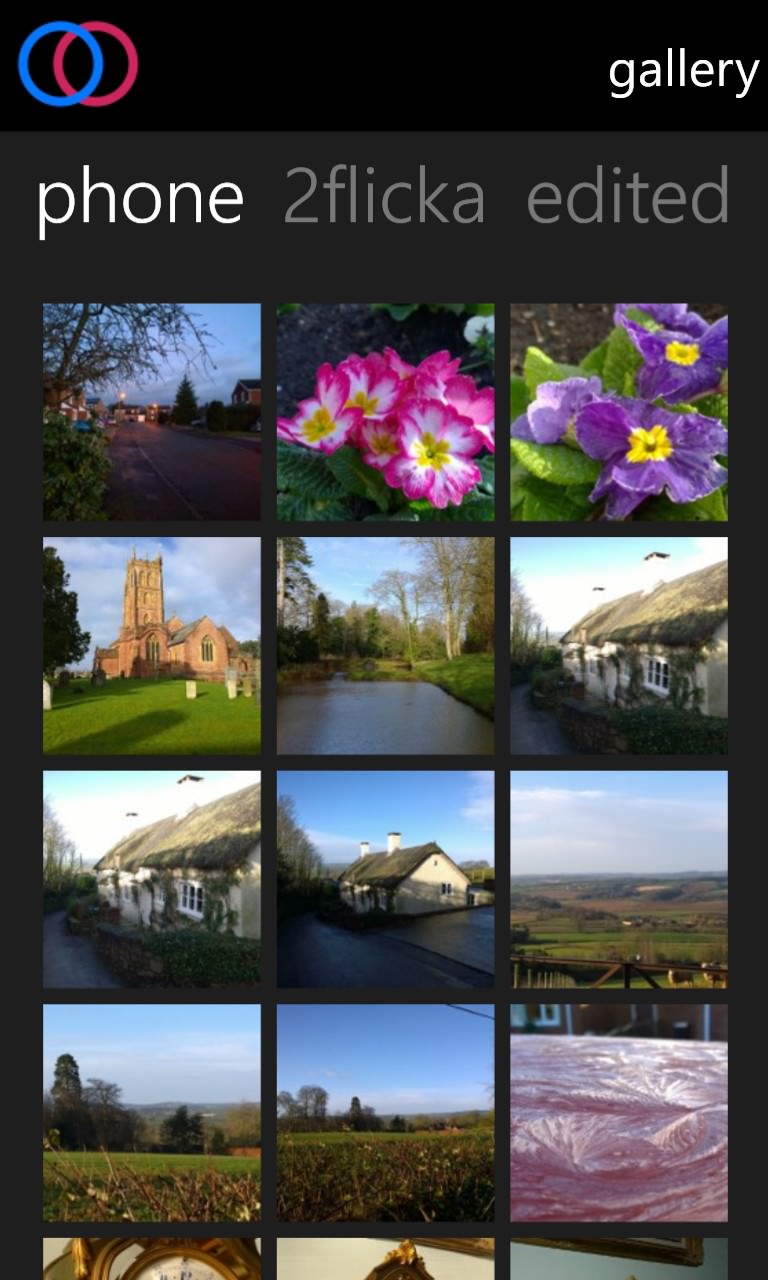 Let's pick something worthy of sending into a Flickr group to be admired by others. Here's a shot of textures of ice on the roof of my car a few weeks ago: 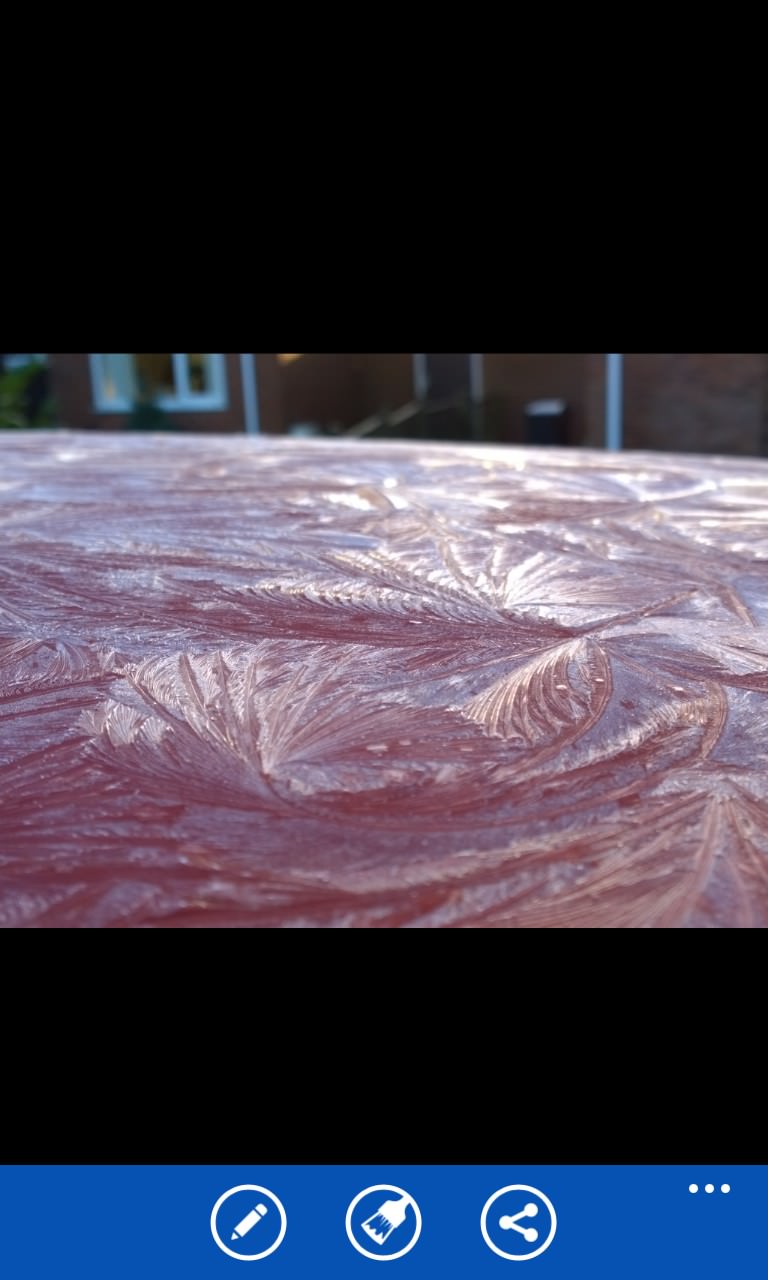 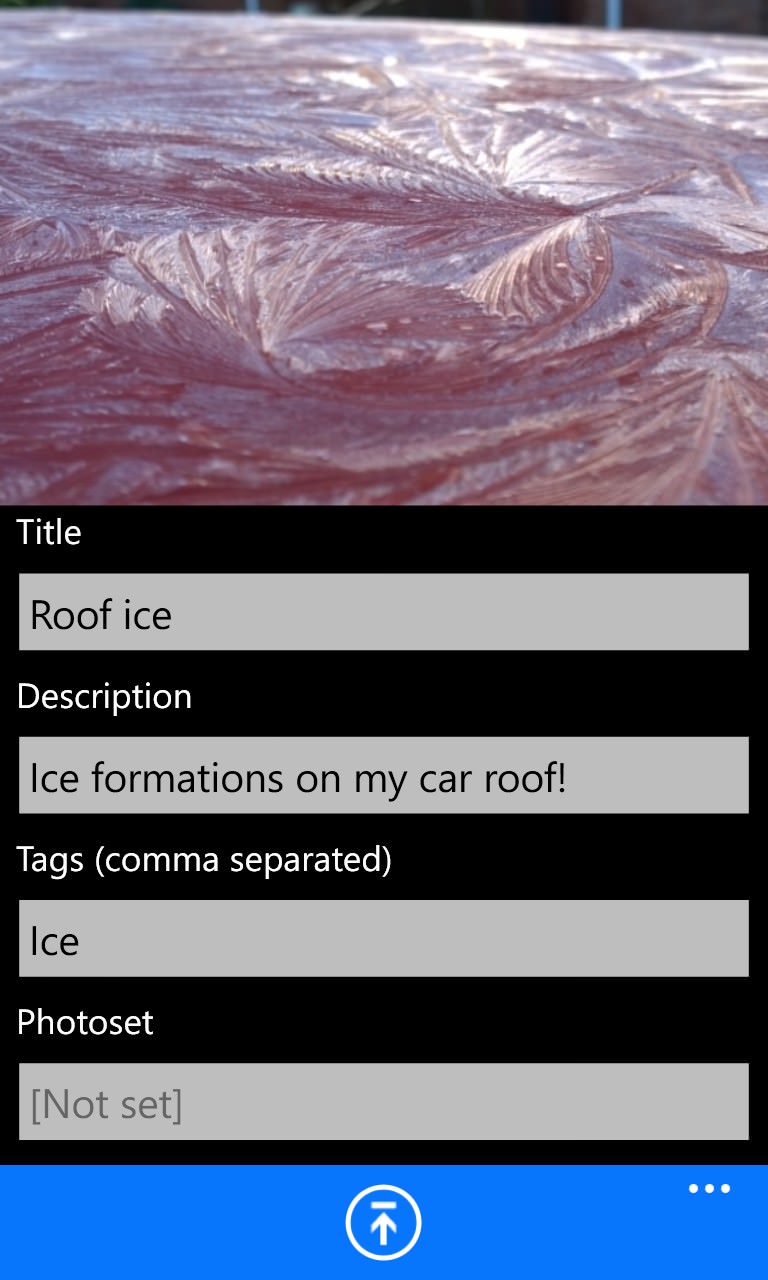 Tap the 'share' tool and you'll be prompted with some metadata fields, as shown above right. They don't have to be filled in, but the more you do, the better. [At the very least, give it a title, otherwise it'll remain as 'WP_92893993.JPG', or whatever!] When you're done, tap the 'upload' tool: 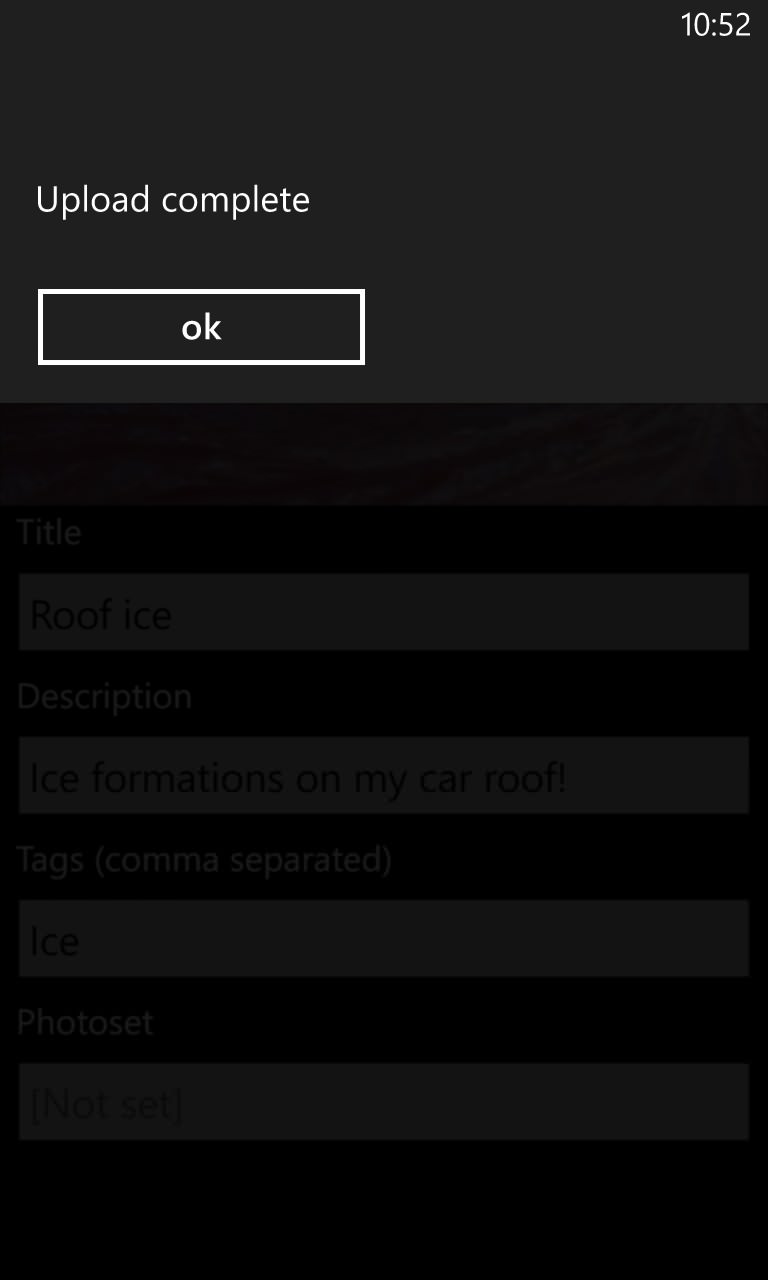 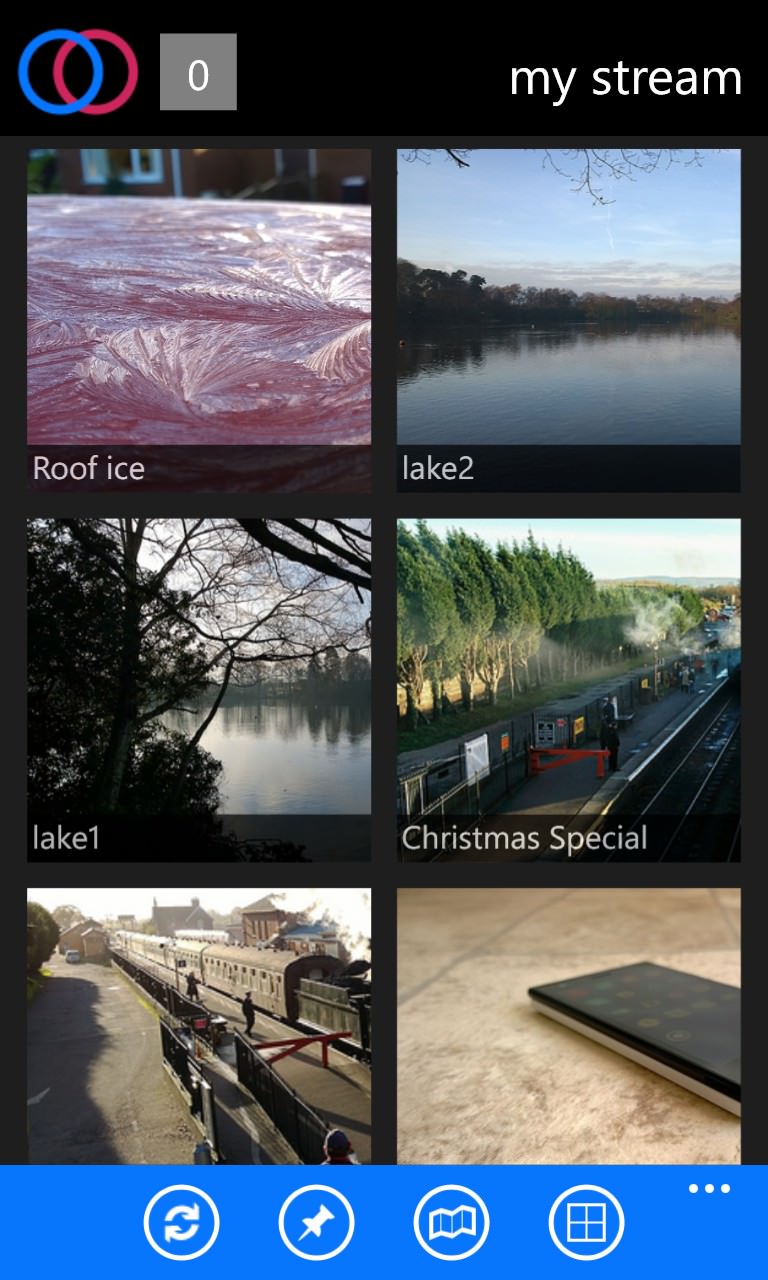 A few seconds later, the photo will be on Flickr's servers - as you can verify by refreshing your stream. The final stage is to add this to any groups required. Tap the photo to bring up its own page, with tools: 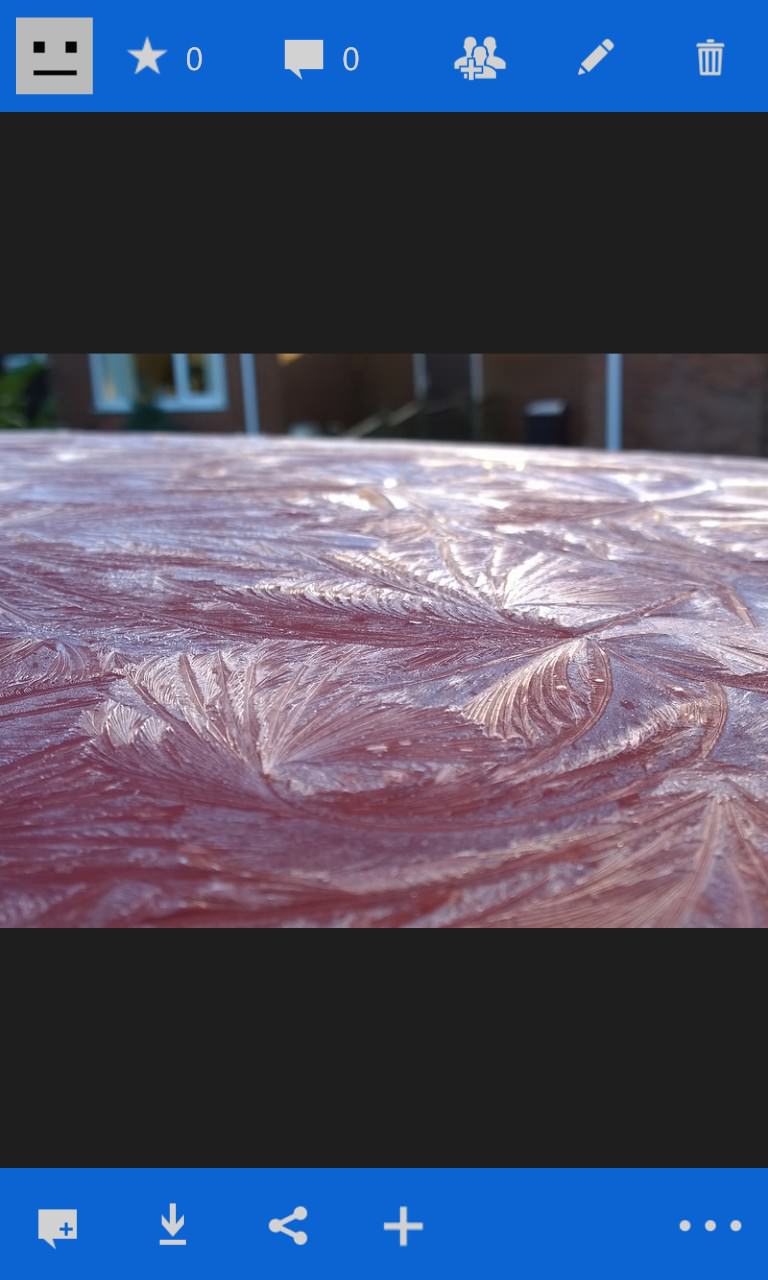 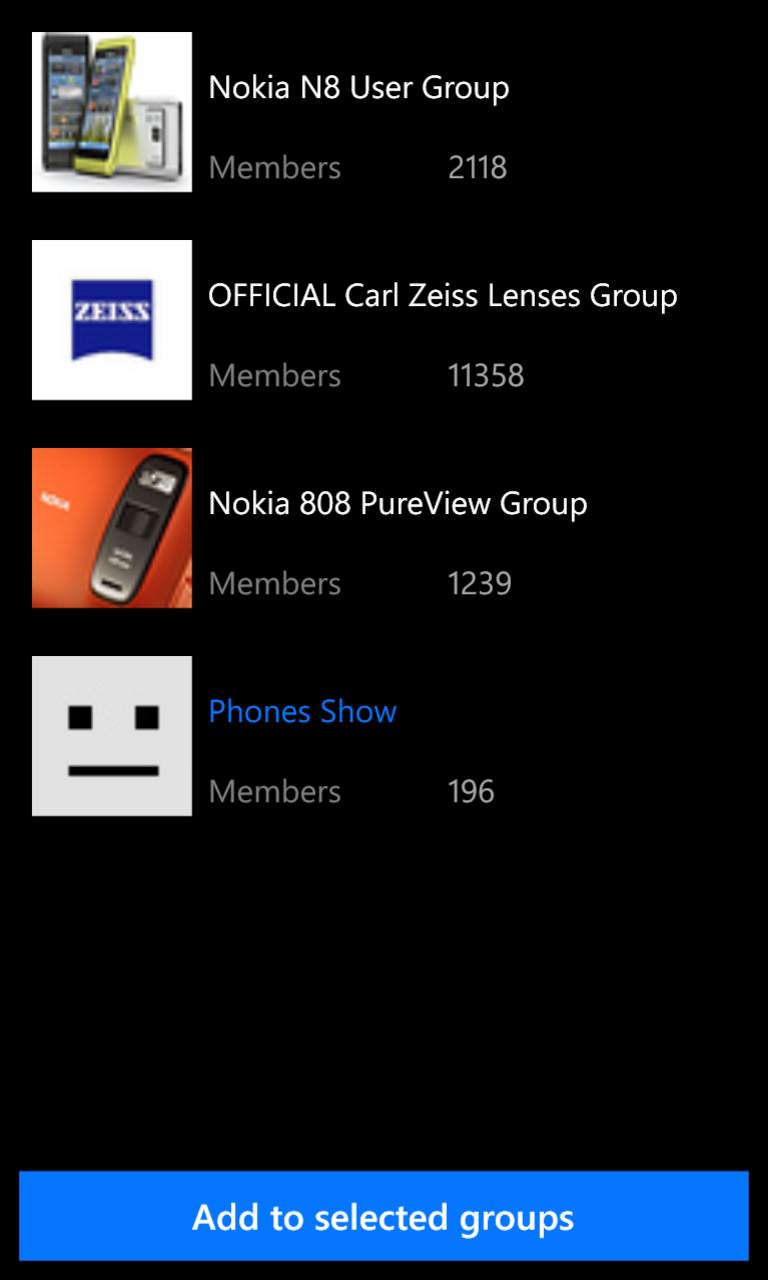 2flicka doesn't help you much with what each of the icons does, but you'll quickly get used to them. The one you want is third from the right, at the top, with the headshots. This is 'Add to groups', so tap it and then tap any groups you want to add the photo to (the titles of any you tap will turn blue). Finally, tap 'Add to selected groups'. 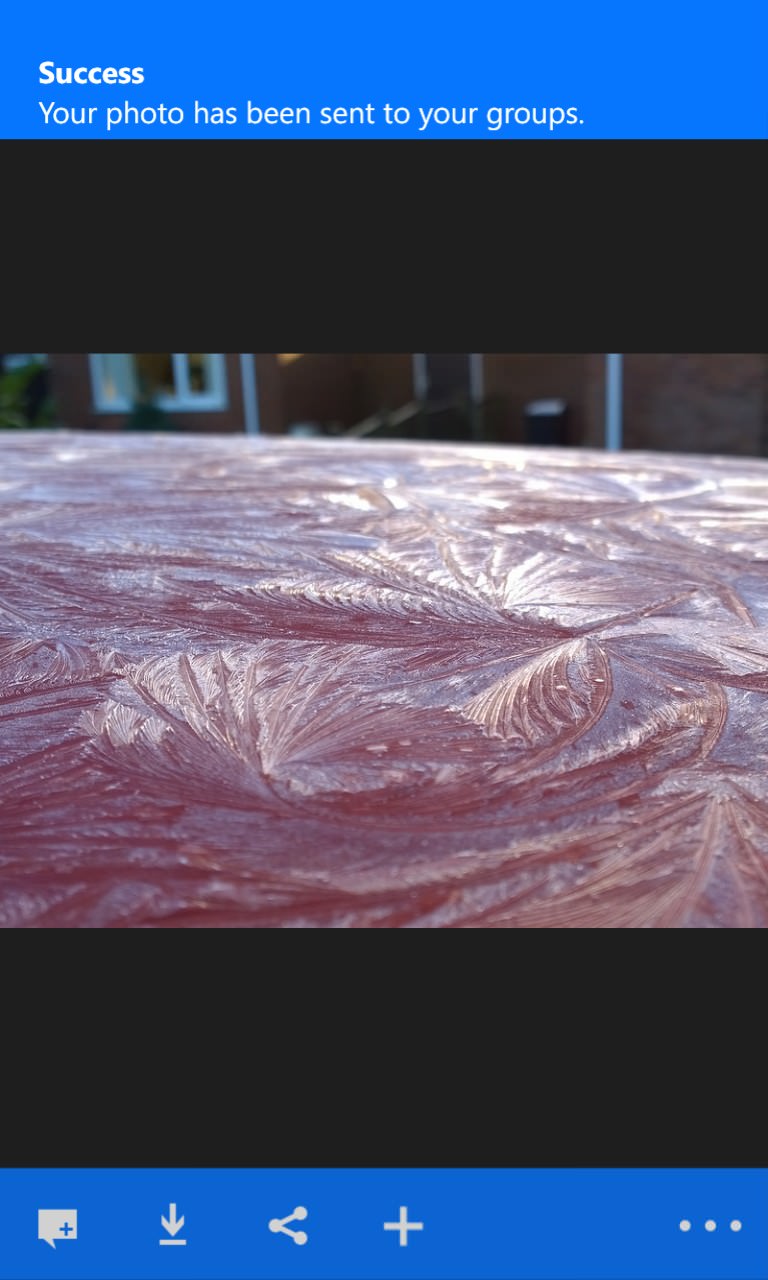 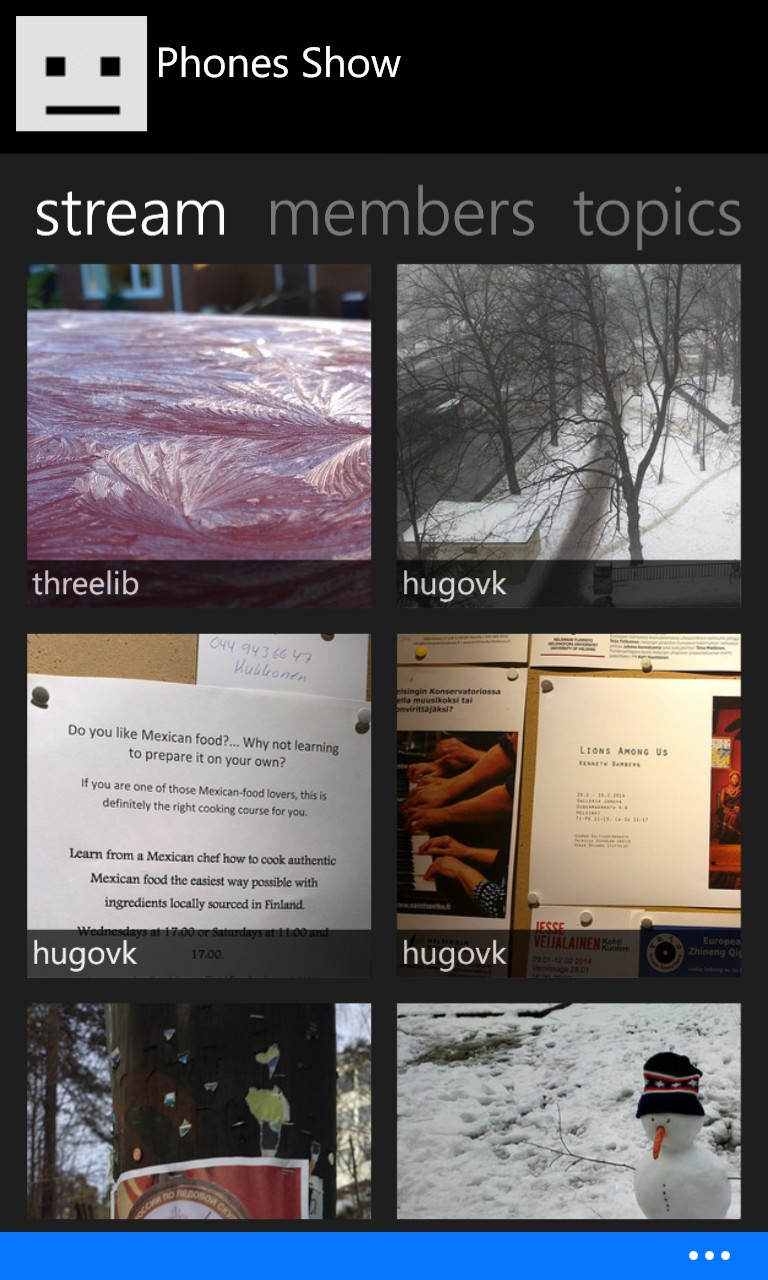 2flicka will then confirm the groups action, as shown above left, plus you can again verify it for yourself by going again to your groups from the main 2flicka panorama and bingo - there's the photo, currently in prime position. It's here online, if you want to see for yourself.

If the above taps and swipes seem like a lot of bother then don't be too worried. In practice, it's the work of seconds, once you know what to do. Plus a number of photos that you want to add to groups may already be on Flickr, in which case you only need to bring up each photo in turn and tap the 'Add to groups' tool, etc.

Hopefully, this has given you the confidence to make more of the Flickr service and communities it provides, all from the convenience of your Windows Phone.

Filed: Home > Features > How to: Browse and upload to Flickr Groups from your Windows Phone