Why LCD is now a better choice than AMOLED for smartphones

As an AMOLED fan for years, it's been fascinating seeing the way technology in the LCD world has caught up in terms of contrast and colours. In fact, judging from my tests and tables below, it seems that the choice of screen technology for smartphones is now pretty clear cut. My advice to go for AMOLED three years ago was sound, but it seems that things are now reversed. This article features the Lumia 1020, 830 and 1520, by the way.

Let's start with the basics and just a little science, here's my definitive guide to the pros and cons of each smartphone technology, as implemented in decent specification 2014 smartphones:

* Of note in the table above is that there's no mention of viewing angles - this used to be a 'thing', but I've tested the latest smartphone screens and anything outside budget handsets now effectively has perfect viewing angles, whichever technology is used.

Your eyes don't deceive you, the 'pros' bullet points are greater in number for LCD and the 'cons' less than for AMOLED. Not that bullet points mean everything, which is why I've gone into test images below, to help try and decide on a 'winner'.

LCD screens from five years ago (think Nokia N97, or the first iPhone, or the later Windows Mobile handsets) were somewhat unremarkable and the advent of AMOLED screens in the likes of the Nokia N85 and the Samsung i8910 brought in widespread admiration for colours that 'popped' and blacks that were really 'black'. However, gorgeous colours and high contrast are now possible with 2014 LCD screens, as we've seen in many devices, not least the HTC One (M7), the iPhone 4 and 5 and, latterly, the new Windows Phone-powered Lumia 830.

I've attempted some comparisons, albeit with some huge caveats.

Here are a few examples showing why I'm turning the corner on my view of LCD versus AMOLED. On top/left in each case is the 768p (pentile) AMOLED-screened Lumia 1020 (from mid 2012), on the bottom/right is the 720p (RGB) LCD-screened Lumia 830 (brand new), both set to automatic brightness in their generic Windows Phone 'Settings', though with 'Settings/Display/Brightness adjustment' turned right up on the 830 (it's one of the Lumia-only LCD tweaks, I believe).

See what you think, there are three comparisons to look at: 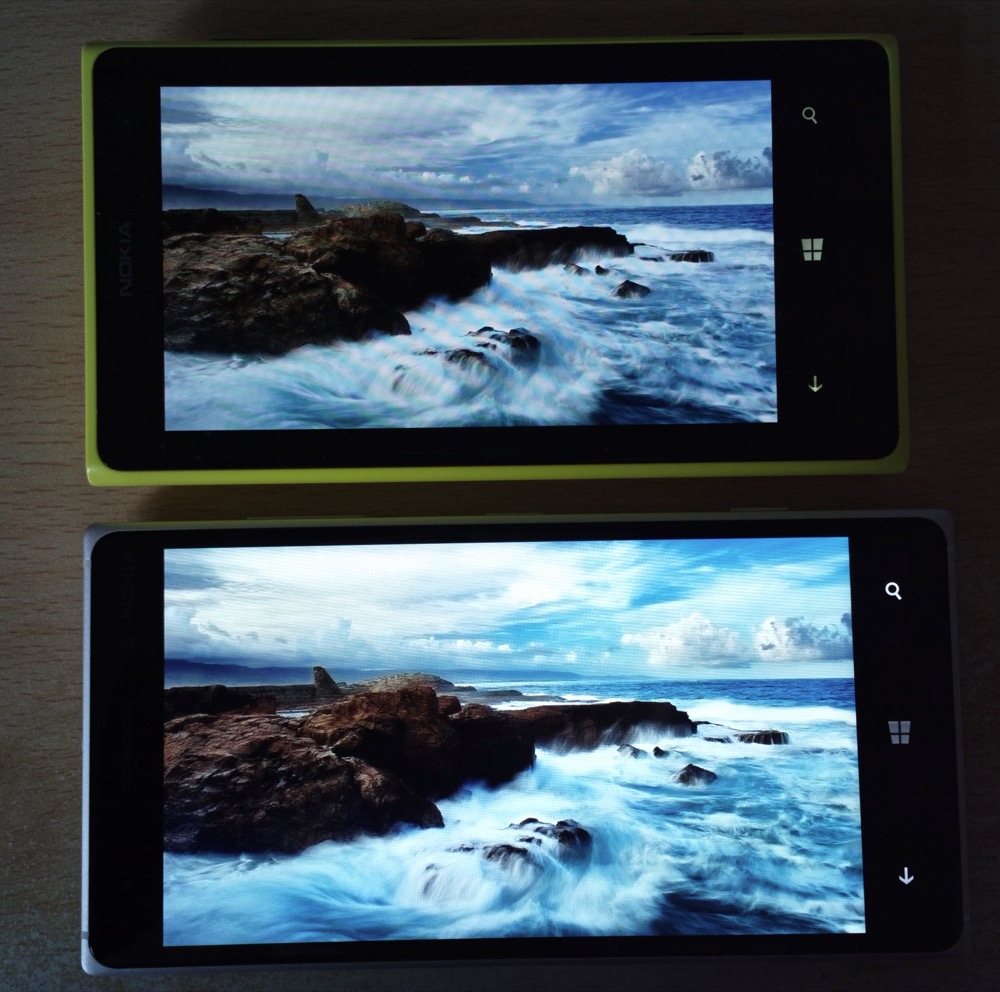 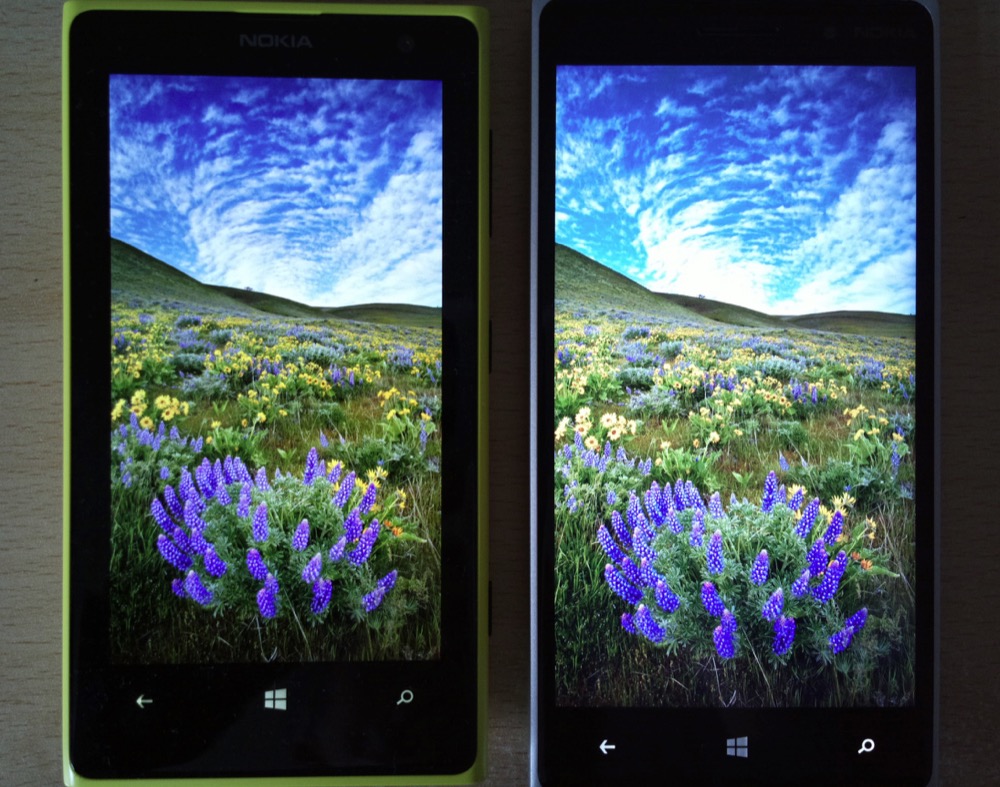 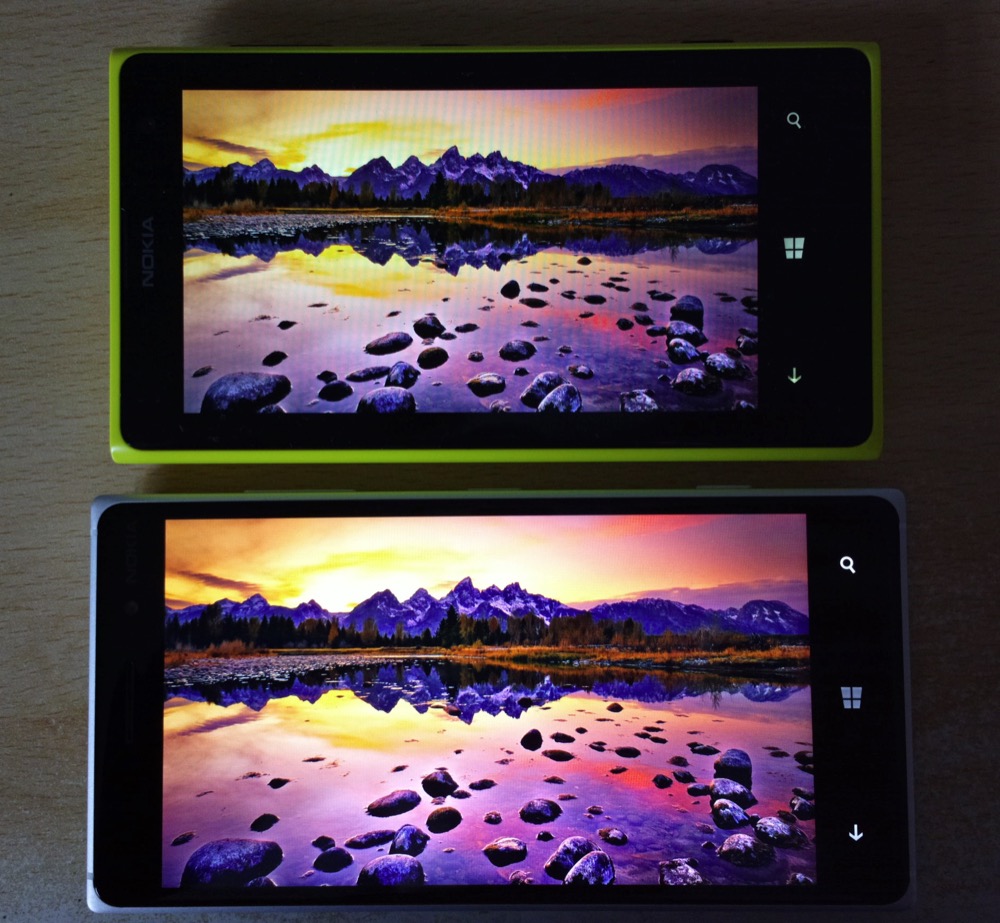 With the caveats mentioned above, it's hard to tell just from these snaps, so you'll have to trust me when I say that, in the flesh, the 830's 'cheaper' RGB 720p LCD screen produced brighter, crisper and even more saturated colours - much to my surprise.

One thought I had was that my 1020's display may have dimmed in the year or so that I've had it. So I grabbed my original 'spare' 1020, which has hardly been used at all, and brought up the same screen and settings: 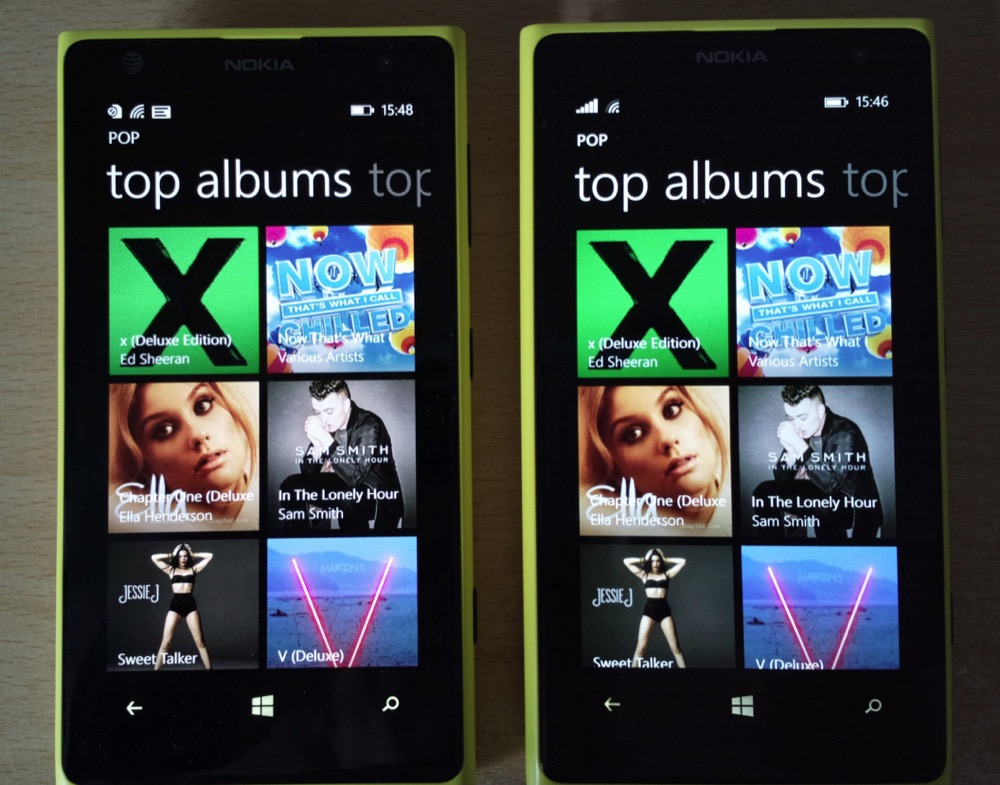 If there had been any degradation in a year, it's very, very slight, I don't think we need to allow for this factor.

The second thing that occurred to me was that the 830's LCD screen seemed brighter and more colourful than the display on the likes of the 1520, a LCD panel from late 2013. So I did the test again, with the 1520 on top and the 830 beneath: 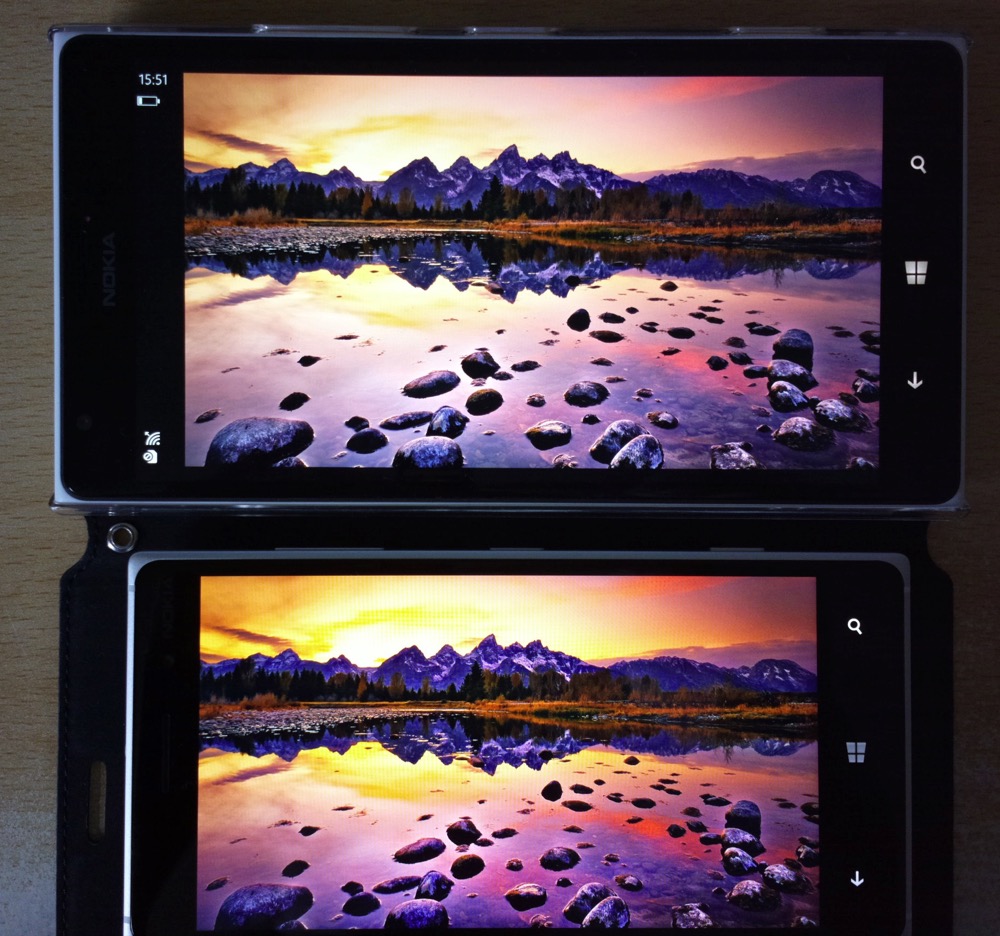 As I suspected, it's the Lumia 830's LCD screen that's improved here, this is how fast screen tech is moving forwards.

I should also add that inside 'Settings/Display' on the 830 there's an additional 'Colour profile' setting - I had this set on 'Standard' throughout, though putting this to 'Vivid' would add even more colour and making the 830 display stand out even more.

LCD technology is, even after two decades, still moving forwards, with more even, unobtrusive backlights, better colourss, better viewing angles and lower power consumption. It's rather amazing, and has surprised me greatly in the case of the new Lumia 830 (see here for my full review).

The table at the top of this post and the images below all make the point somewhat forcibly that LCD now has enough advantages over AMOLED that the former should be used whenever possible in new smartphones. (Whatever I used to say five years ago and whatever Samsung continues to proclaim to this day!)

Filed: Home > Features > Why LCD is now a better choice than AMOLED for smartphones