AMOLED and the Glance night shift

Buried in the apologetics table in my article looking at the pros and cons of AMOLED versus LCD screen technology (summary: LCD wins overall) was a specific AMOLED advantage that deserves its own highlight spot. Is it enough to tip the balance for most users? Probably not. Is it enough for yours truly? Absolutely yes, and this time I have photographic proof...

[Writer's note, for fans of older Nokia hardware. The images here, in pitch black conditions, were taken on the Nokia 808, not a DSLR! Cool, eh?]

From the earlier piece, buried in the table, was this 'pro' for AMOLED:

Now, I've been a big deal out of Glance in the past, and for good reason - having time, date, notifications and (e.g.) weather on-screen all the time is nothing short of wonderful. And yes, it still beggars belief that Microsoft/Nokia only released one handset in 2014 with Glance - and even that, the Lumia 830, has the function hugely comromised by the screen tech, as we shall see below.

Useful though it is in the daytime, Glance screen comes into its own at night. My own smartphone 'use', from bedtime through until morning, is to have my Windows Phone on the bedtime table beside my pillow. Usually plugged into the charger too, of course, though that's not relevant in a Windows Phone context (it is in an Android context, with some newer phones able to put up a 'Daydream' clock when power is present, and no, iPhones can't do this at all).

A cursory look at Glance on the likes of the Lumia 830 and 1020, the two phones featured here, you'd say that the implementation was pretty similar, even if the 1020's information was brighter. In fact, the screen tech used makes an enormous difference when using Glance screen on a phone at night.

You see, the AMOLED screens work by lighting up just the pixels that need to be lit - it's how 'true blacks' can be achieved, while LCD screens rely on a backlight (usually at the side or bottom of the display) casting illumination on a screen-sized array of display pixels. At night, in a pitch dark room at 2am, the difference between the two Glance screens is catastrophic.

Let me illustrate. Here's Glance on the Lumia 1020, with an AMOLED screen, photographed at night in a 100% pitch black room:

Pretty clear, with minimal illumination of the rest of the display*, and with super clear information, even for bleary eyes and a partly awake human(!)

* Seen with the eyes and night vision (i.e. not through a photo on a web page), you can see a faint glow from the rest of the display, the thinking is that this is light diffusing through the glass surface (see comments below).

Now contrast that with how Glance appears at night on the LCD-screened Lumia 830 (or 920, 1520, etc.) and note that the photo here is VERY kind, exposure had to be ramped up a lot so that you can see the 830 (I'll explain more below): 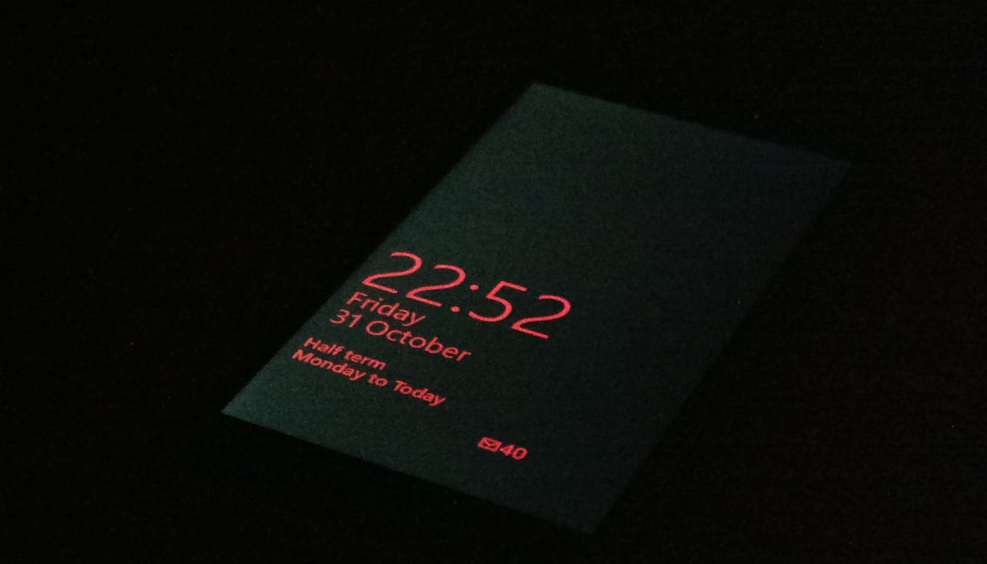 Here you can clearly see the backlight at work, with far lower contrast between backplane and Glance digits. In fact, from personal experience with the Lumia 830 over the last two weeks, I'd say that it's actually pretty hard to pick out the information quickly with eyes that aren't necessarily fully awake and focussed. As I say, the photo above is very kind to LCD - in reality, with night vision, it's much harder to read.

There are two factors at work here:

The second point above is just as important as contrast, I can illustrate this with an image very simply. Below are the Lumia 830 (LCD, left) and Lumia 1020 (AMOLED, right) next to each other in a pitch dark room:

On the left hand side, you can just about see the Glance display on the LCD-screened 830. Just. There really is that huge a difference in brightness and visibility.

A pretty damning set of evidence for this particular function then, though of course Glance is not vital to everyone, as perhaps Nokia has decided in ommitting it from most handsets over the last few years.

A perfectly valid question, then, is to ask which devices with Windows Phone 8 DO have both AMOLED screens and Glance screen? The list is (please chip in if I've missed one, thanks to commenters below for helping flesh this out) sadly a very short one:

Nothing from 2014 at all, though with the 925 and 1020 both now cheap in clearance sales and second hand, at least one doesn't have to pay out a fortune to acquire AMOLED Glance and enjoy a good night time experience.

Sigh. I do wonder if the hardware guys (now) at Microsoft are reading all this!

PS. It's also worth noting that it really pays to have dark themed apps when turning the phone in the middle of the night. We've all experienced the pain of a white web page appearing 20cm away in a pitch dark room!