There's something of a blanket assumption that everyone currently using Windows Phone 8.1 will upgrade to Windows 10 Mobile - after all, Microsoft has been promising that 'majority' of users will join the Window 10 ecosystem. But, after a few recent experiences of mine with budget devices, I thought it worth sounding a note of caution and reality - I'd put money on the actual conversion numbers to Windows 10 Mobile being significantly less than 50% and maybe as low as 15%...

A brief reminder though, here's what Microsoft said a couple of months ago, perhaps in response to my nudges that the new 'baseline spec' of 8GB internal storage and 1GB RAM in the new bottom end Lumia 435 and 532 (and 535, of course) was a huge hint that this spec was needed to run Windows 10 properly. Microsoft's Chris Weber said:

For example, you can get the budget-friendly Lumia 435, the selfie-happy Lumia 735, or the gorgeous gold-edition Lumia 930–and you will be able to upgrade to Windows 10 as it becomes available, starting this summer. It’s the best of both worlds: amazing hardware right now, with a VIP pass to killer new software later this year.

We’re making it as easy as possible to get Windows 10. Windows 10 has been designed to run well on today’s Lumia phones. Like any upgrade to a new operating system, not every phone will upgrade or support all possible Windows 10 features, and certain features and experiences will require more advanced future hardware. Our goal is for the majority of the Lumia phones running Windows Phone 8 and 8.1 to join the Windows ecosystem along with an expected hundreds of millions of PCs, tablets and other devices running the next generation of Windows.

The wording is ambiguous, of course. 'The majority of the Lumia phones' probably referred to the range of devices, rather than the installed base of tens of millions of phones. My theory at the time was that the likes of the Lumia 530  and perhaps even the 520, plus several third party designs (including HTC), will all be left on Windows Phone 8.1 Update 1. I said, at the time: 'the RAM requirement is probably less stringent than that for internal space, mind you. However efficient the code is at running on a Snapdragon chip, you can bet that there will be more of it and 4GB devices will be squeezed out.'

This has proved to be the case in reality. Now, before someone calls me out on what follows, I should emphasise that I've been testing (upgrading) phones to build 10166 of the Windows 10 Mobile Insiders Preview and so there may well be extra tweaks and optimisations made to the OS before it's finally ready for a hopefully wide range of devices. However, I do feel that I've got a good handle on how it will all pan out.

The cheaper Windows Phones are characterised by older and less capable processors, less RAM (512MB) and less internal storage (8GB), both in theory still enough to handle Windows 10 Mobile, but actually upgrading the OS 'in place' isn't as easy as you might think. I took a Lumia 520, a 530 and a 435, factory reset them (i.e. wiped everything), inserted a meaty microSD card as well, and then signed in to my Microsoft account on each. In other words, perfect conditions for the upgrade, with nothing in the way. 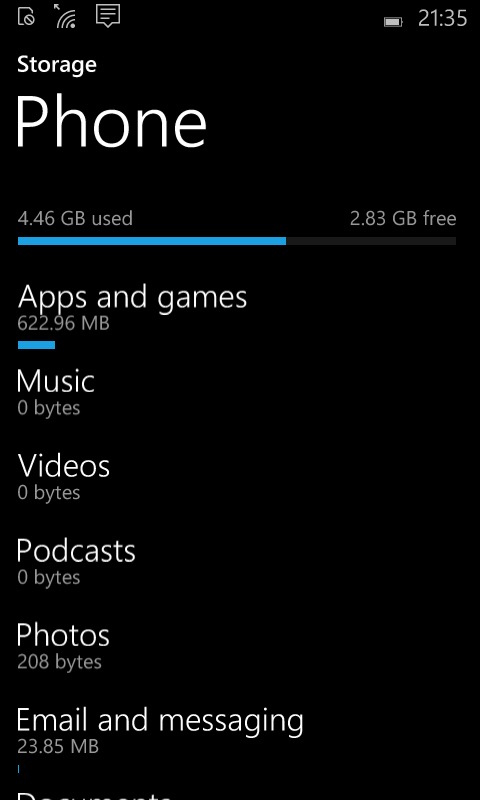 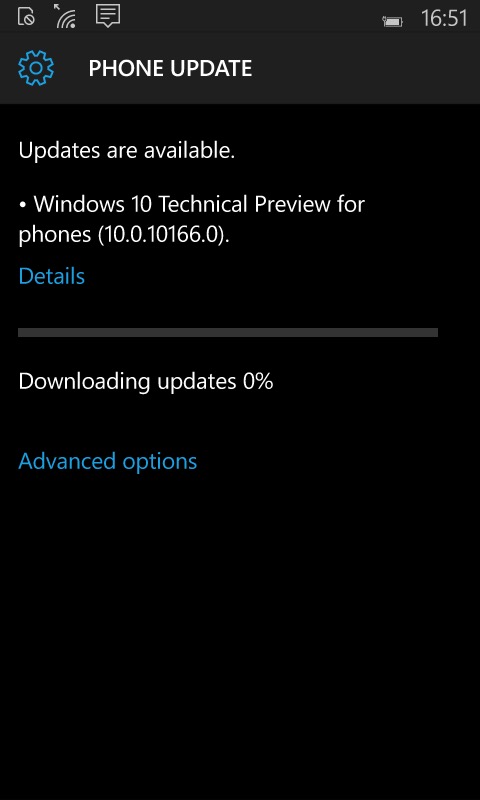 Here's how I got on: 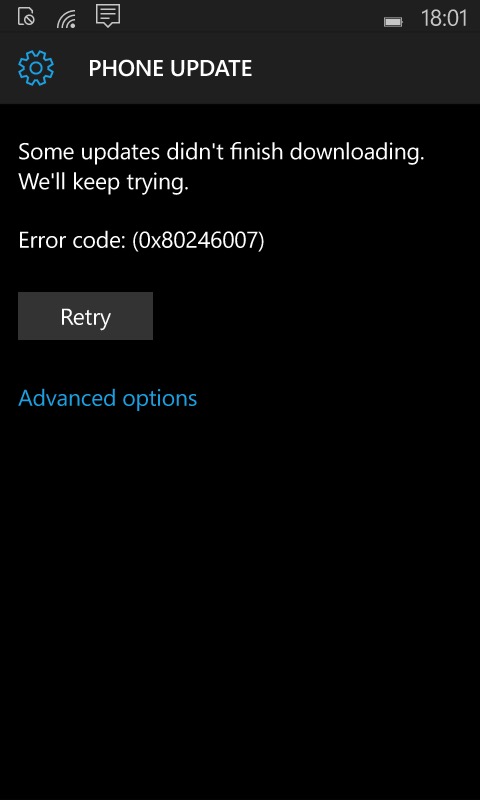 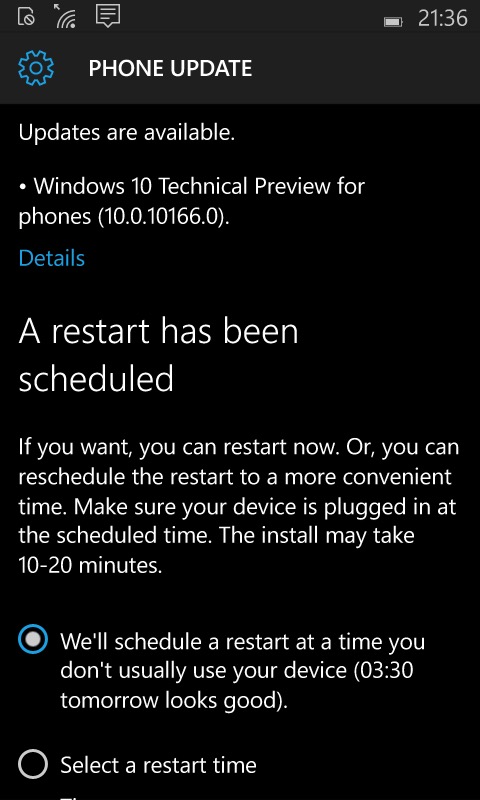 So mixed results then. The internal storage requirements are interesting here. See the first screenshot above - 2.8GB free in a nominally empty device. This was after factory resetting and then signing into the Store (so that the upgrade would work, an account is required, etc.), meaning that updates were also grabbed for core Windows Phone applications and components, plus the usual system and temporary files (up to a Gigabyte in all). All of which means that even with no actual user content at all, there's potentially less then 3GB free for working space on a nominal 8GB Windows Phone. As it turns out, on my 520 at least, this proved (after a few errors and false starts) to be enough, but barely so, and the upgrade experience was slow and fraught.

And again, yes, I'm sure Microsoft will be able to tune the update package slightly, to work a bit more reliably, over the next month, but I'd be surprised if things changed much.

Now, consider the average user of a Lumia 435, 520, 535, 620, 630/635, and so on. In fact, given the large sales of these budget devices, these actually make up the majority of the Windows Phone installed base across the world. Such budget smartphone users have, typically, been battling that internal memory since they bought the phone, constantly being told 'insufficient memory' and having to uninstall one game in order to install the next one. If the user's savvy enough, they'll have bought a microSD and accepted the offer to install new applications (and photos, etc.) on it. But this is the budget end of the market and we're still only talking about 8GB or 16GB cards at most. (And I know someone who bought and inserted a '2GB' card!) The likely position is that, at this end of the market, the average user will still be living with only 1GB or so free on their internal disk.

Now, 1GB free is fine for day to day use, especially if there is in fact a microSD inserted and everything's being installed/saved/captured to that. It's all working, at least. But now what happens when Windows 10 Mobile is offered, some time in September 2015? Here's how a typical conversation will play out, as I chat to my Lumia 520 owning friend over a beverage of some kind:

Steve: "Hey, how are you getting on with that Lumia 520? Did you know that you can now get Windows 10 Mobile on it?"

Bob: "Oh yeah, I got a message about that a few times, but I kept cancelling it, the phone's working fine as it is."

Steve: "But [insert me talking about all the things W10M brings] it's a much more capable OS, look at it on my Lumia 930, why not give it a try?"

Steve: "Err... I guess so. You've got everything backed up, I see from your Settings. Go on, hit that 'Install' button."

[An error pops up, along the lines of 'Insufficient space, please delete some applications and content']

Steve: "Ah yes, you need another two or three GB free on your internal disk!"

Steve: "It means you'll have to err... [looks embarrassed] delete all your applications and all your games. Don't worry, you can always install them again later on."

Steve: "Err... actually no, if you restore your Windows Phone 8.1 backup to Windows 10 Mobile then funny things might happen. Sorry. I speak from experience."

Bob: "So you want me to get rid of almost everything and then try to upgrade, hope it works and then put everything back on manually and then spend months fiddling until it's all working again? I think I'll pass, why can't I just carry on with the phone the way it is and then buy a new Windows Phone with the new OS on when my contract's up at Christmas time?"

Steve: "No reason. No reason at all. In fact, that does seem like a pretty good plan!"

You get the idea. Conversations like this will happen up and down the land - and indeed across the world. 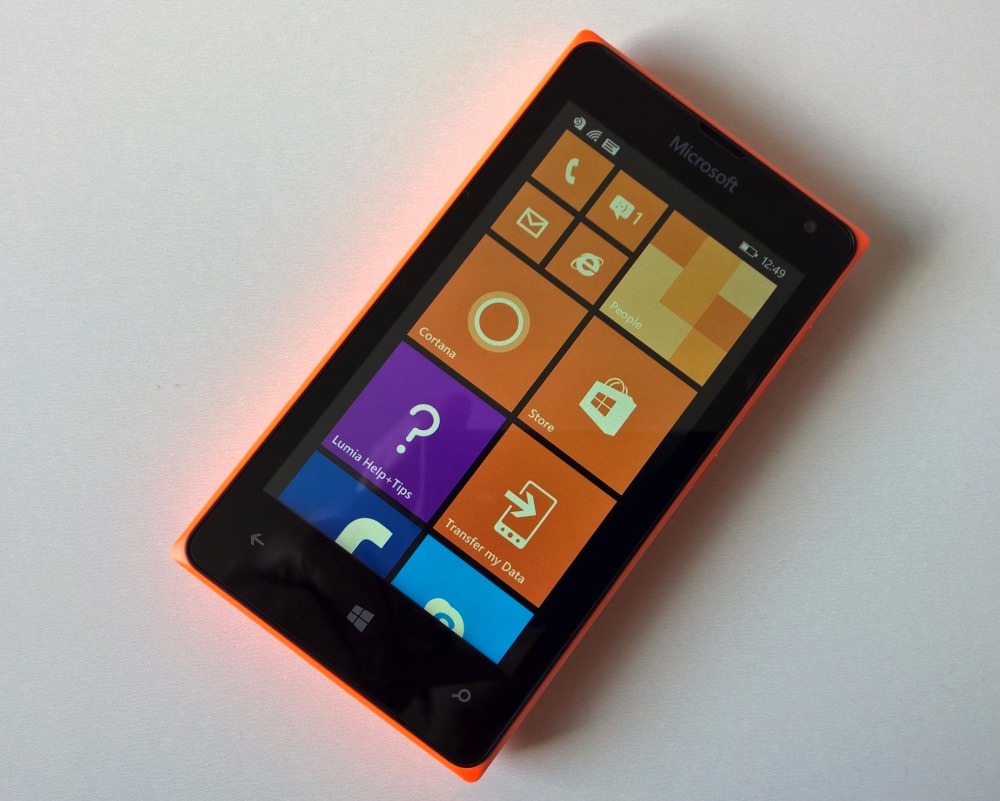 There's also the word of mouth factor. Once one person has successfully upgraded but reports that lots had to go to free up space, and that the update took hours, and that lots of things have changed, I doubt whether their friends will rush to upgrade.

Not that there's necessarily any need to - Windows Phone 8.1 Update 1 (or 2) works fine for a great many people (up to a hundred million, depending on who you talk to), the core applications and services are kept up to date, ditto Cortana and ditto third party applications. Which means that I really hope that Microsoft words the update notice sensitively. What about wording like:

An update is available for your phone, bringing a new,

You don't have to update though - if you don't have 3GB free
on your internal storage and another 2GB free on a microSD card
then feel free to stay on Windows Phone 8.1, which we'll
keep secure and working smoothly for you for the lifetime of your phone.

Companies like AdDuplex regularly report on device shares in the Windows Phone world, putting the fraction of budget devices (sub-7series) at well over 75% and even though I've famously decried these stats as somewhat skewed, they're not that far off.

Assuming that the above scenario is typical for the Lumia 4xx/5xx/6xx series crowd and that only a small fraction of these do update to Windows 10 Mobile, and assuming that around half owners of 7xx/8xx/9xx/1020/1320/1520 series owners do the same (a fair assumption - adoption of the update wil be much higher at the top end and lower for the likes of the 720 and 735), then the overall adoption of the over the air update to Windows 10 Mobile will probably be of the order of only 15% of the entire Windows Phone installed base.

But consider this more a data point than a note of panic. Most Lumias (and other manufacturer Windows Phones) were designed around Windows Phone 8.x and they'll work best with this. There really is no pressing need for any particular user to move 'up' to 10. And if a user does feel that pressing need then the chances are that they know enough to be able to handle any resetting/reinstalling. Or indeed are saving up for something higher end in the Windows 'phone' world.

Just don't think that more than about ten million people/phones will be upgrading to Windows 10 Mobile over the air, come the Autumn.

Of course, just about every reader of AAWP is IN that ten million power user group, so think about this feature as setting up some context! Your comments welcome, especially if you have 'normob' Windows Phone users in your family - maybe you can sneak a peek at their phones and how they're getting on with regard to storage, cards and apps? And prepare yourself for 'that' conversation in a few months time!!

PS. There's also a school of thought that says, even after playing with Windows 10 Mobile in Insider form, that Windows Phone 8.1 will stay smoother, faster and more usable day to day. We'll be monitoring how the new OS works on current hardware once it's formally released and no doubt will come back to the 'upgrade?' question in future features!