Working with Maps on Windows 10 Mobile: a FAQ

One of the cornerstones of Windows Phone for years was the Nokia/HERE Maps and Drive applications inherited from Nokia's Symbian days. And with Windows 10, all of this is changing, though perhaps not to quite the same degree as you might think. You won't see the HERE brand in Windows 10, but see below for some common questions and answers about Windows Maps.

Who has developed Windows (10) Maps?

With the caveat that I'm not privy to the innermost workings at Microsoft, Maps (v4.x) seems to be largely Microsoft code, with some portions remaining from the original HERE Maps source code, with the likelihood that the latter will be phased out in the coming year(s).

For the vast majority of users, Maps is a direct navigation replacement for Here Maps/Drive+, with a similar interface, and indeed many people simply won't notice the difference.

Who supplies the map data?

In fact, Microsoft licenses data from a wide variety of sources, including - yes - mainly HERE/Navteq. But data (and aerial imagery) is also brought in from:

Having been experimenting with Open Street Map and other sources in my off-road feature, it's clear that mapping has never been so available - HERE/Navteq maps are still predominant, but it's becoming easier and easier each year to move to wider and cheaper sources of road and geographical data.

Can you still download road maps for offline use and navigation?

Absolutely. The maps (mainly from HERE/Navteq at this time) are as they've always been in terms of division and availability. Just specify the country you want and they download to the local storage of your choice. And you can navigate completely offline, unlike Google Maps on Android, where you have to be online to actually calculate a route. 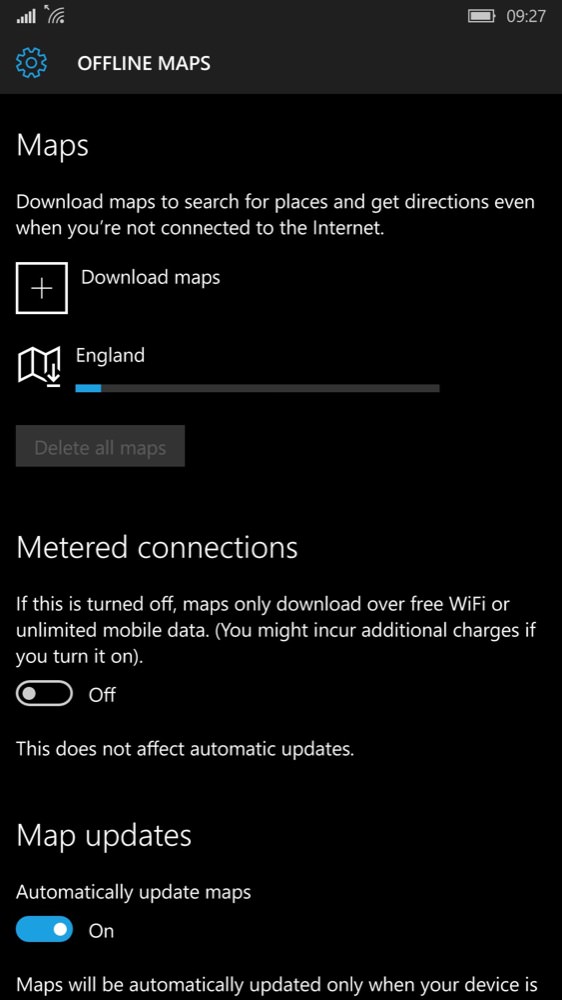 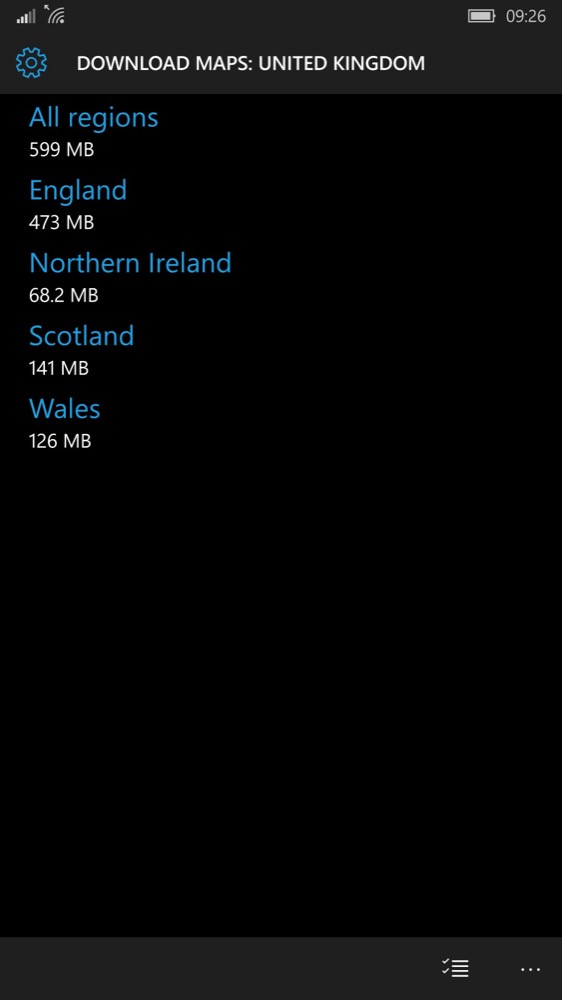 In fact, there's a bonus, since Maps for Windows 10 Mobile will automatically check for map updates and grab/install them for you in the background. Well, that's one less thing to have to remember to check every few months!

Can you still choose which navigation voices are used?

Ahem. No. You currently get (what sounds like) Cortana announcing directions. Yes, you could change the entire language of your device, but that's a bit drastic. One of the most common requests of the Windows 10 Maps team is to enable the use of alternate voices (e.g. male/female voicings), so who knows, maybe this will be included by the time Windows 10 Mobile is fully available?

Can you still access your HERE Maps POI 'Collections'/'favourites'?

No, and not yet, again. I spent quite some time on this, trying to find a way to export my 'Collections' from HERE Maps (signed in on the Web) and then import these into Bing Maps (again on the Web, on a laptop), consumed multiple beers, and... failed. Going from Google Maps favourites is potentially easier, by the way, thanks to support for some export standards (e.g. KML), but we're talking an all Microsoft 'upgrade' here, so....

But being able to import Nokia Maps/HERE Maps favourite places doesn't seem like rocket science, so maybe this will make an appearance too. Having said that, I tend to only have about a dozen favourite places (mainly relatives houses) and it's not more than a few minutes' work to enter these again from scratch. My typical query of Maps is, effectively, 'I am here, but I want to get to XYZ's house, what's the quickest route?' No doubt there are some hard core Maps users out there who have hundreds of POIs, carefully curated, though, so let's hope some kind of import mechanism can be put in place, even as a one-time thing via the Web and linked Microsoft and HERE accounts.

Is traffic still allowed for and, if necessary, routed around?

Yes, most definitely, it's all built-in, though it's not clear exactly which source is being used for live traffic (I'm guessing HERE still, but who knows...) Having said that, estimated travel times into heavy urban areas are still unrealistic, so it's the usual case of sat-nav systems only routing around, or allowing for, jams if they get beyond a certain level of severity - it's a city, so allow 15mph average doesn't seem to be thought of. 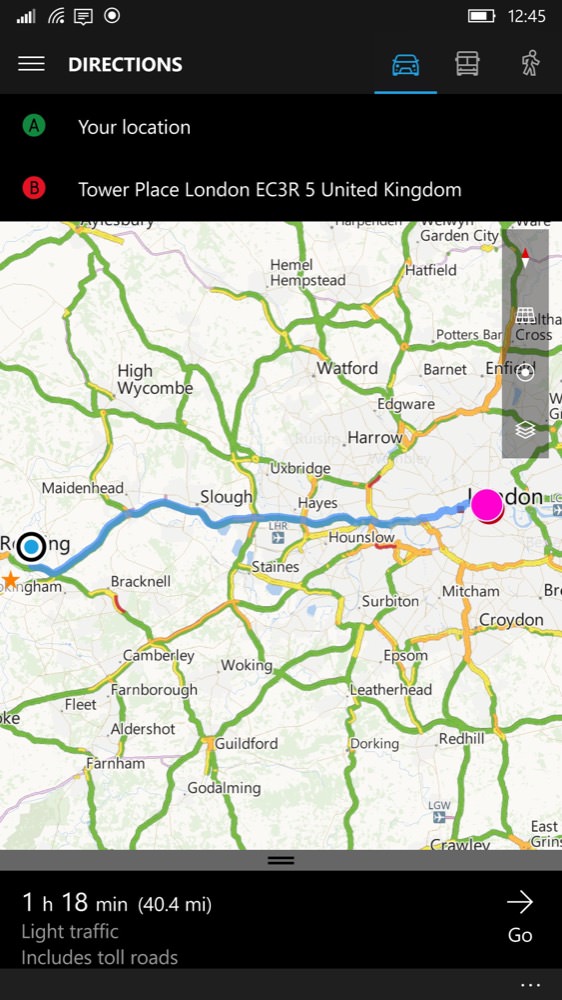 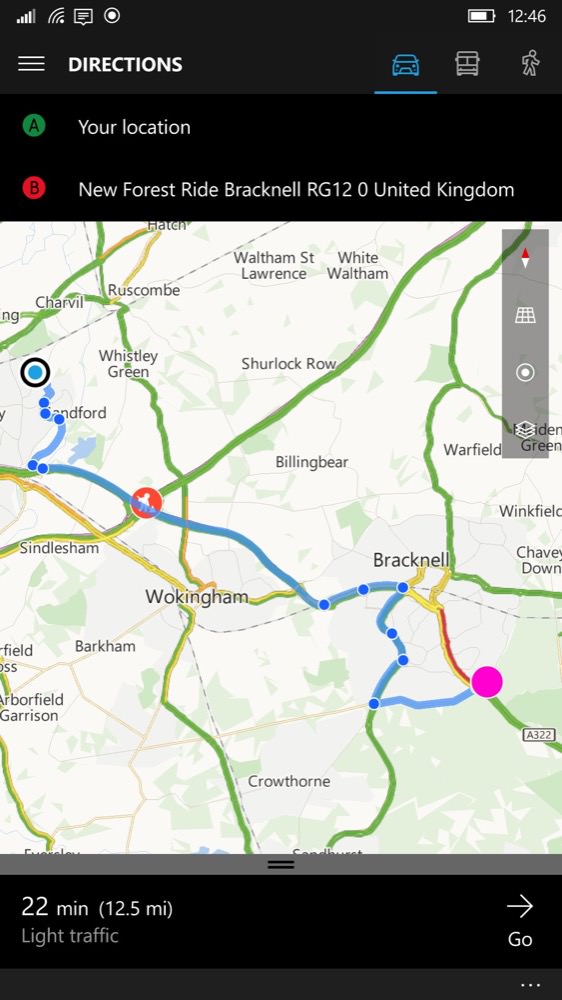 1 hour 18 minutes to the centre of London? I'd like to see THAT! (right) Still, avoiding obvious jams and incidents seems to work quite well...

But that's all expected, I was quite impressed by some of Windows 10 Mobile's Maps' routing and reporting throughout.

Do you get rerouted, during the journey, as traffic conditions change?

I think so. This will need a few weeks, if not months of testing, so please excuse some fuzziness here. And data points welcomed in the comments! You can turn traffic avoidance off and on in the 'Options' dialog for route calculation, by the way, along with specifying preferences, like avoiding toll roads and ferries. It's all very well integrated.

What about information on hold-ups and blockages?

These are overlaid, if required, by the 'Show traffic' layer, and go down into minute detail, such as what a particular set of road works is for and how long they're expected to last. At least in theory - take the timings with a pinch of salt, with accidents sometimes shown as lasting into the next day. One would hope not! But it's wonderful to see all of this, broken down and hopefully pretty accurate, out of the box in Maps. 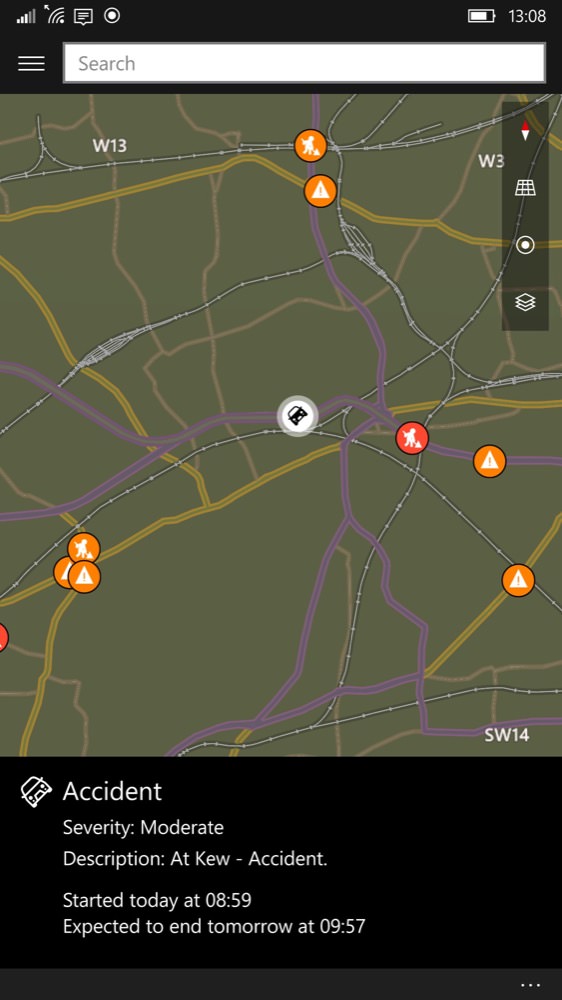 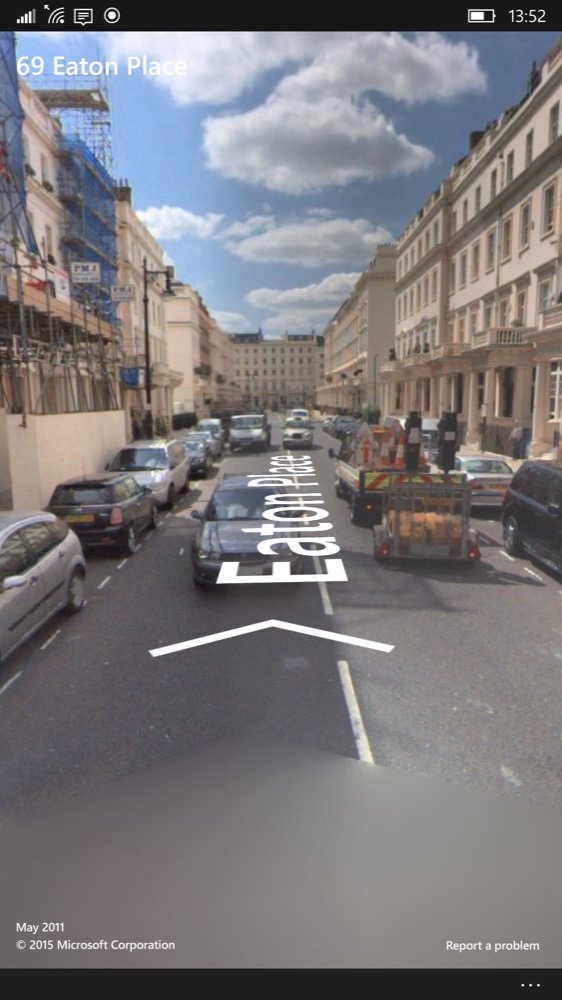 With the traffic layer on, tapping to see a particular live hazard; (right) the Microsoft Street View in action (in London)

Is there an add-on for transit/public transport?

No need, it turns out that transit routing is all built-in, at least in supported countries, in the same way as Google has integrated transit data into its own Maps system on Android. Thus, pick a destination, ask for 'Directions' and then tap on the transit icon top right. 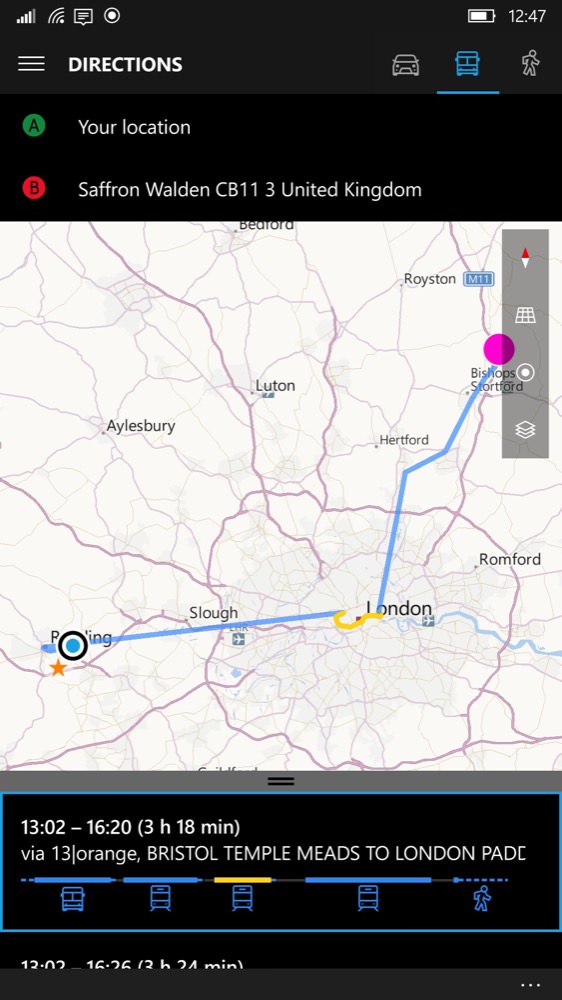 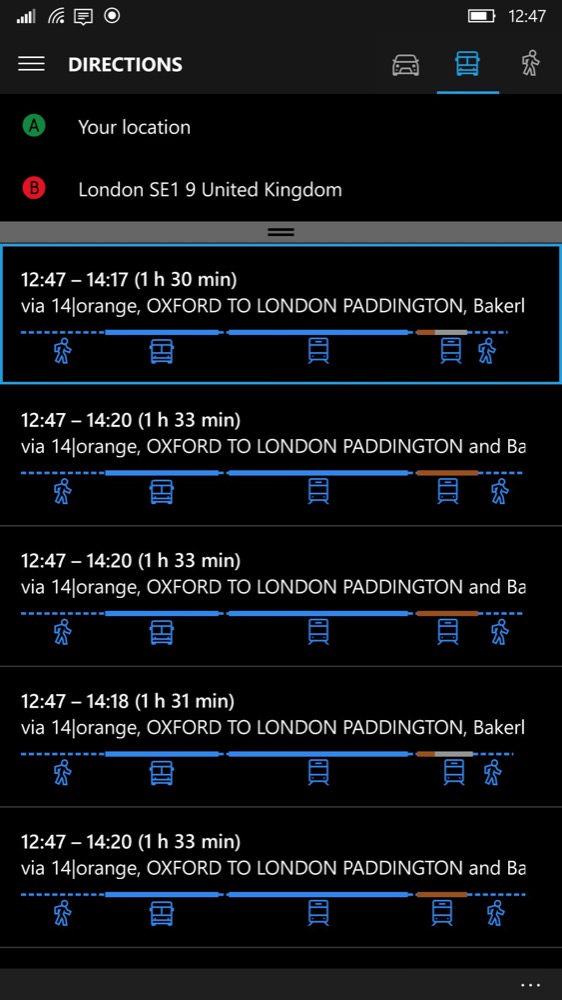 Planning a public transport journey, albeit with over-simplified railway routes(!), swiping up to see the full range of options (though in this case it's academic, since all the variation is in how you get through the London tube system and the first part of the journey is identical!

Can I still get lists of directions?

Yes, just swipe up before tapping on 'Go' and you'll see every junction listed. While navigating, you can also choose 'Directions list' from the menu if needed.

Not even close, it's remarkably easy to crash, and the map modes can get stuck, to name but two that I experienced while researching this article. But we've still got at least two months before members of the public have to live with Windows 10 Mobile and its applications, so there's a lot of bug-fixing that can be accomplished.

What about the future and HERE Maps/Drive+?

Slightly oddly, the Windows 10 Mobile Insiders Preview firmwares have been coming with HERE Maps/Drive+ as well. In part because we're testing the OS on Nokia-branded hardware (e.g. Lumis 1020, 1520) and licensed copies of HERE Maps/Drive+ are expected as part of the overall package. But also in part because Microsoft knows that its own Maps application isn't quite there yet.

However, Maps isn't that far off, and includes a number of extras over and above the old Nokia/HERE code - heck, I haven't even mentioned the 3D Cities feature yet. Plus Microsoft's plans for its own Street view features, some of which are glimpsed in these screenshot, though coverage isn't anywhere near as complete as Google's as yet.

I'd expect the launch version of Windows 10 Mobile on new hardware, or 'Microsoft-branded' Lumias, such as the 640/XL, to not include the HERE applications at all.