When the going gets tough: Windows Phone off-road mapping

It's all very well having world-leading HERE Maps data covering every street in the known universe (well, almost), but what about when you abandon your car and start hiking, cycling or even geocaching, out in the country? For this, you need extra software and data help. Viewranger, on other platforms, is very well known, but it's not available on Windows Phone - begging the question, what to use instead? In this updated feature, I run through over half a dozen very viable alternatives. 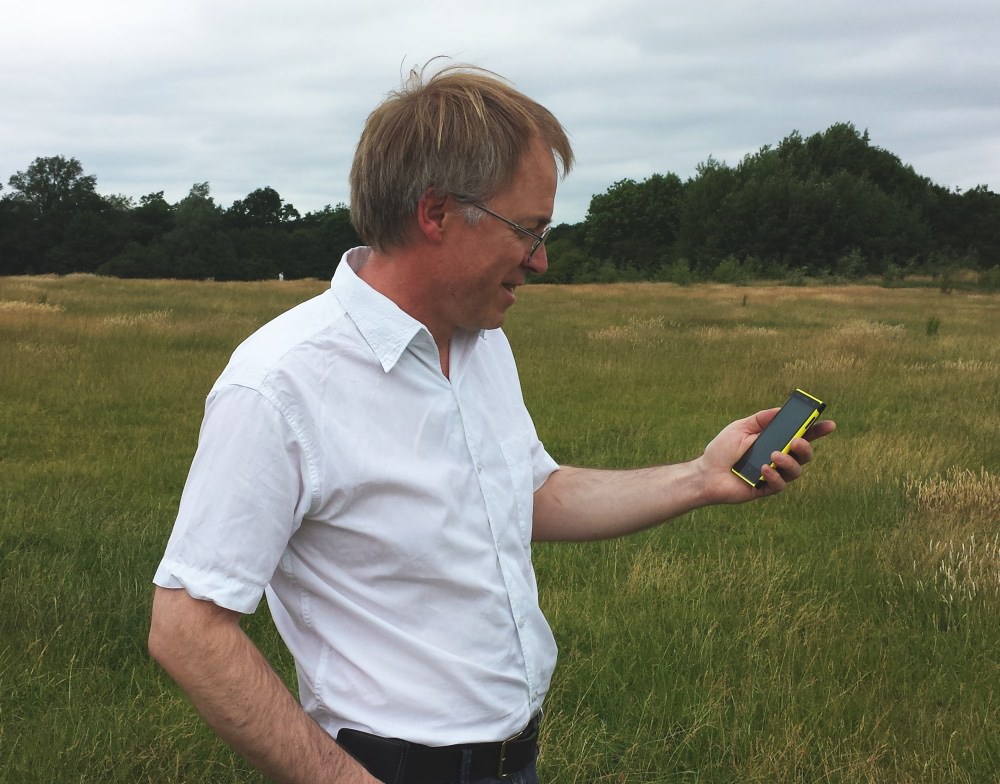 For the purposes of this article, I was reviewing the applications below on a Lumia 930 and 1020 and in the UK - it goes without saying that app and map coverage wherever you are in the world may be different.

It's also worth noting that the mapping used here mainly comes over the air with a data connection, though I do mention offline use, if relevant. And, if out in the middle of nowhere, the chances are that you'll have scouted out the area ahead in your chosen application, so hopefully the relevant sections will be cached to some degree. Still, I have to add a slight coverage caveat. Your comments welcome as to which applications you've found most useful!

Also, I did try at least four other applications, but none fitted the bill in terms of detailed off-road mapping. The apps/techniques featured here are the best and the ones to try.

NB. This is a revision to the original article, adding GeoGPS and NaviComputer after recommendations in the Disqus comments.

By far the most expensive application in this round-up, this is also the most serious/comprehensive, with every navigational stat you could want, combined with the widest variety of online maps. Happily there's a week's trial version that's more or less fully working, but after that it's £7.50 (in the UK). 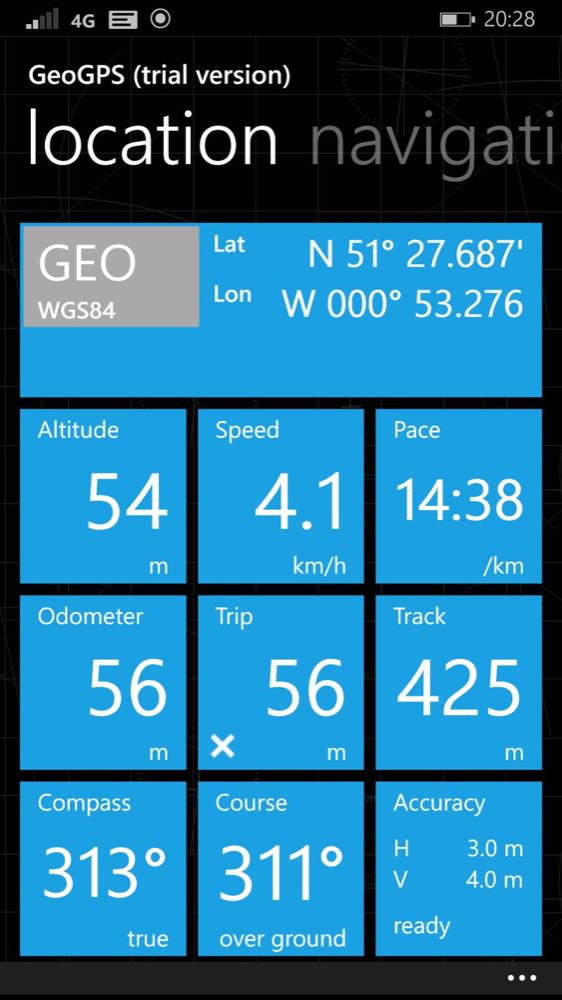 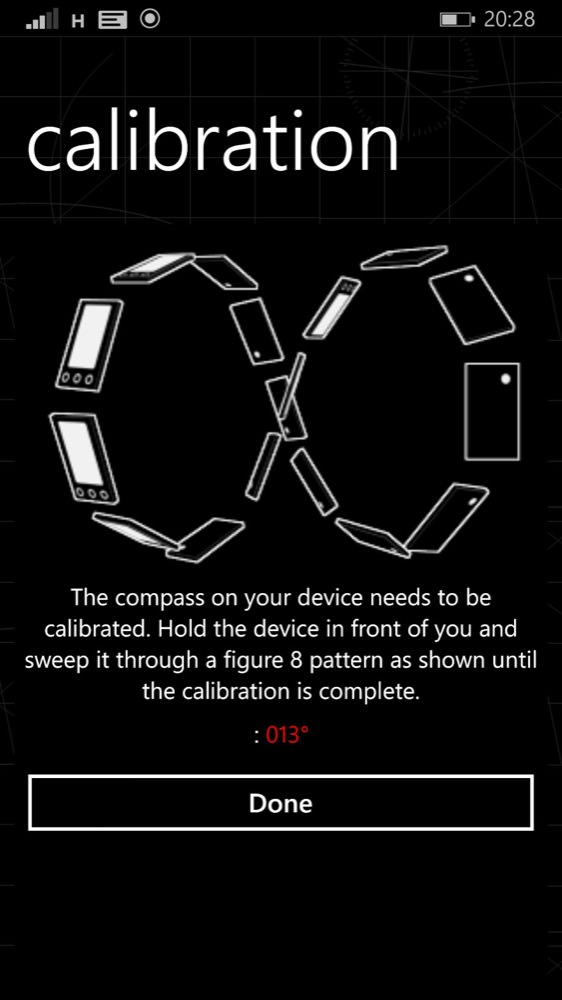 The price is easily forgotten though when you realise that the mapping sources for UK residents like myself include map imagery from the Ordnance Survey, the best and most accurate of all paper maps in this country. In the absence of an official Ordnance Survey application, this could be as good as it gets, short of the low tech camera method mentioned below. These maps come in via the back-door, in this case Bing Maps, and there's a licensing requirement not to be able to explicitly download whole areas, so you're limited to areas 'cached' in the application - but for most short trips, trails and regions this will be just fine. 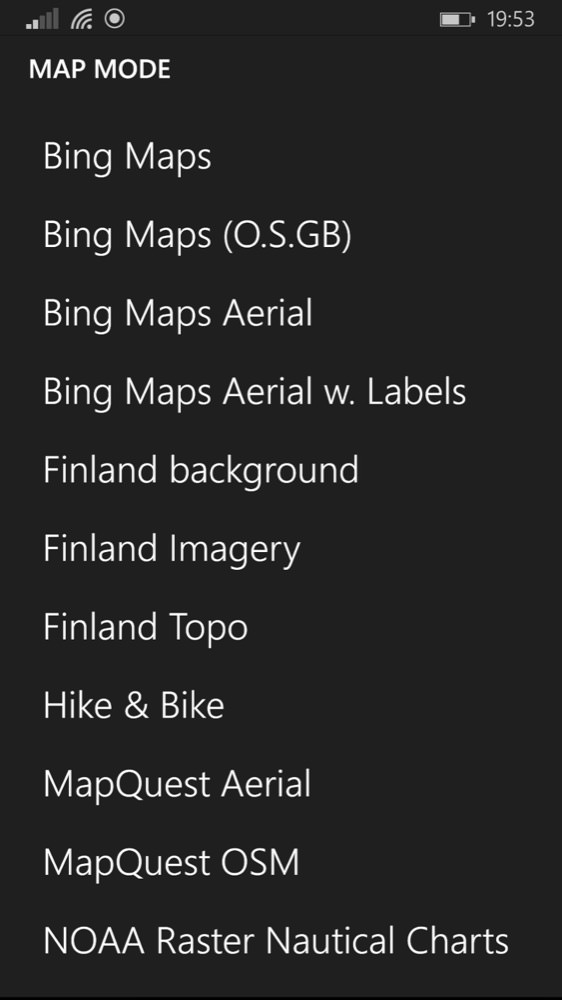 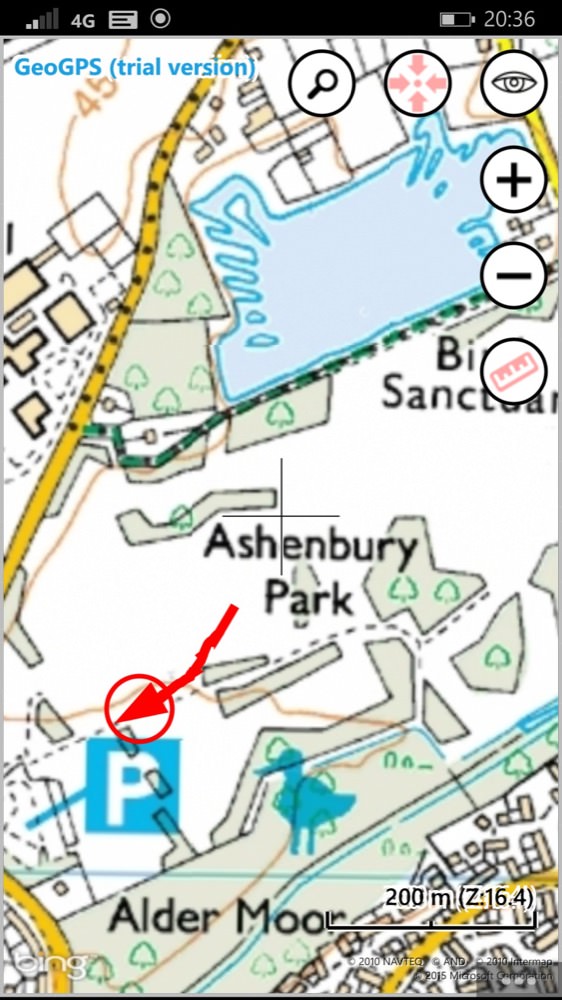 For other countries, the advantage is not so apparent and there are the usual suspects like Open Street Maps to fall back on. Still, well worth a trial either way.

A competent off-road navigation and mapping tool for Windows Phone, this stands out because of the offline possibilities, essential if your target area is out of data coverage. Not only can you sync in maps from a PC-based tool (NaviMapper) but you can also select and save maps locally, i.e. direct from the map screens in the phone itself. Shown below are samples from 4UMaps, but of course there are also the same sort of detail and possibilities with Open Street Map. All very slick. 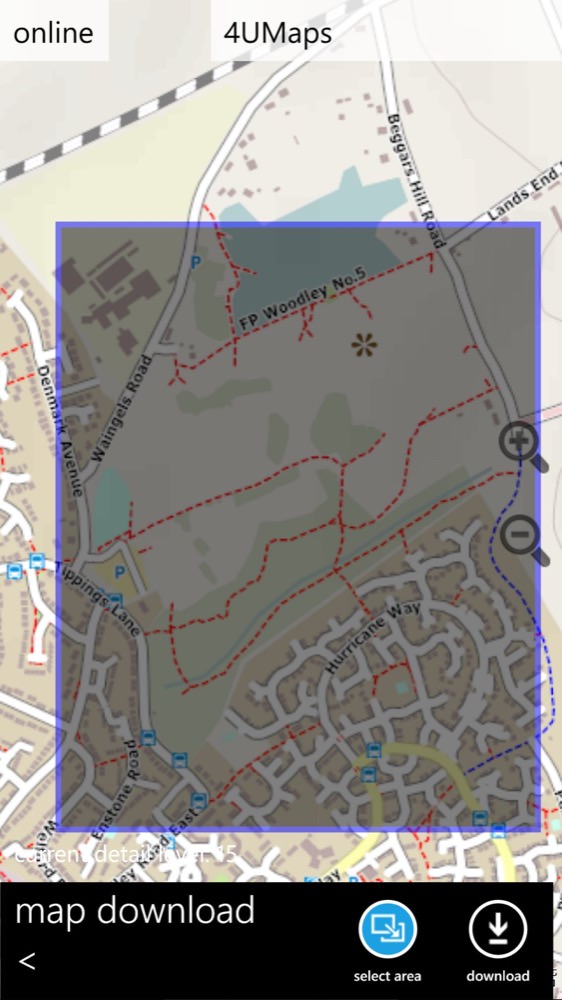 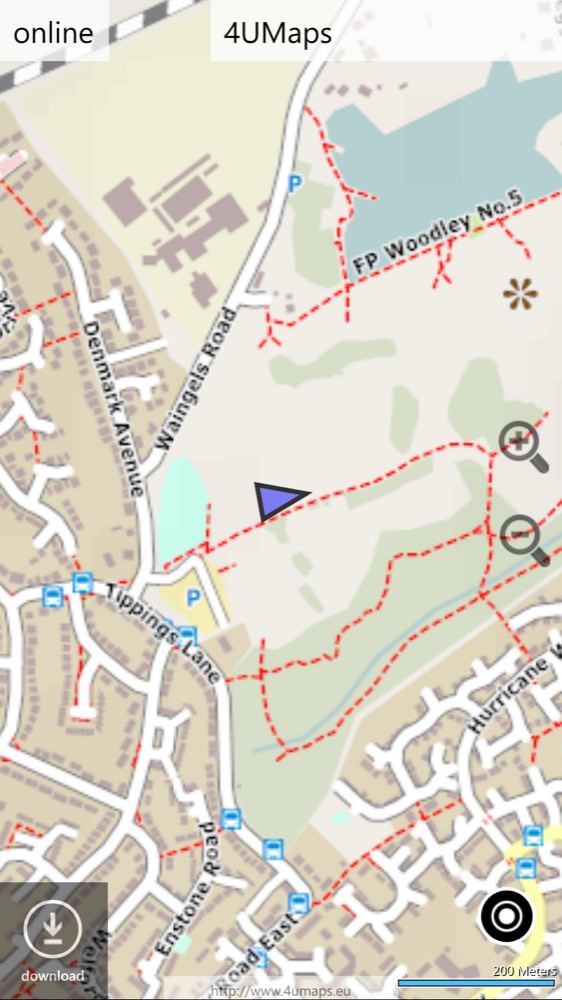 Everything about NaviComputer is right, including the price (free).

Although designed around geocaching, obviously, this also includes mapping from a variety of sources, with the OpenStreetMap 'Mapnik' renderings probably the most useful to walkers and cyclists. Footpaths, cycle tracks, dense foliage, water, are all clearly shown and a single tap is always enough to recentre the map on your current position. 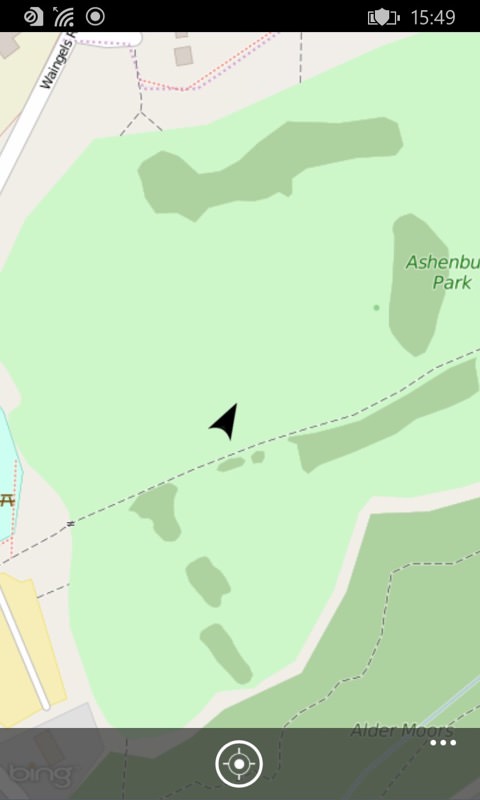 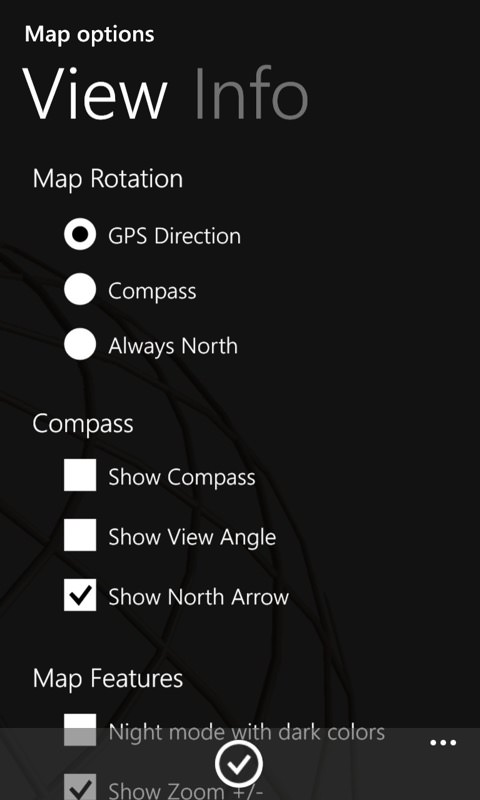 It's simple and effective, with North always 'up' the screen - fine for me, but might confuse some people. Most of the application's functionality is centred around finding and annotating geocaches, but the mapping portion is completely free. You can use Geocaching Pro offline, using map tiles that have been cached for further use in the future, though you do have to put up with a big 'Unable to connect' banner over the top, which is a bit annoying.

A terrific little application that also ties into OpenStreetMap in its various versions (though some appear to be locked out at present - I used the 'Mountain Bike' one), displaying trails, foliage and more, all entered by the community. The map viewer here also lets you rotate the view as required, so 'in front' of you can always be 'up' the screen, and so on. 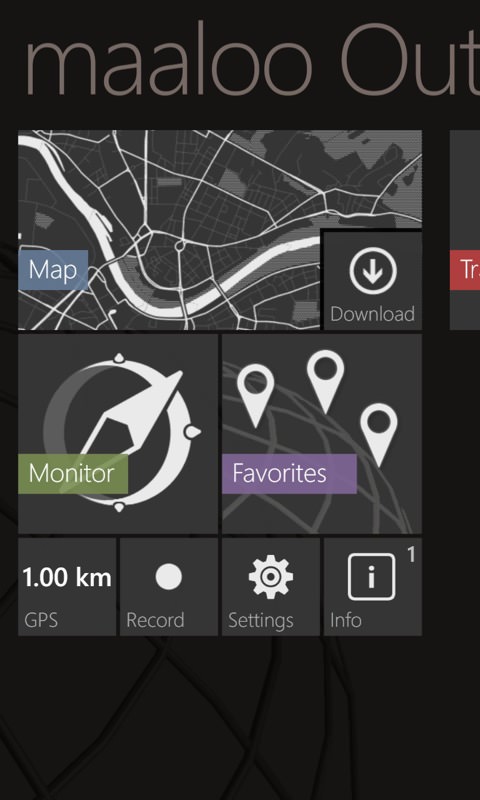 Offline mapping is handled here by the ability to 'download' map areas, though seeing which areas have been saved is a little awkward. In short though, you should be able to manage without a data connection for much of the time.

Fully working for free, aside from an enforced 30 second 'trial' delay, this is, as it sounds a viewer for the various OpenStreetMap maps and it does a perfectly fine job. There's a choice of (currently) eight OSM layers, with a thumbnail showing roughly what each will look like, plus a track recording facility, perhaps to remember where you've been and use the information elsewhere. There's even a search facility for names within the OSM data. Again, there's caching of maps used between sessions, so as long as you've viewed that area before, at roughly that zoom level then you're good to go even if data fails you.

Somewhat oddly, half the time the application started up showing the entire world(!) and I had to keep tapping to zoom in - probably data and GPS-lock-related, but worth mentioning if only to show the cool world map render above(!)

Of course, even in the absence of bit-mapped licensed maps from the like of Viewranger, there's nothing whatsoever, given the advance in resolution and quality of modern phone cameras, to stop you photographing paper maps and then browsing round the images. For best results, I used the Lumia 1020 here in its 38MP mode (using the 1Shot application) and then HD Photo Viewer 8.1 to really dive into the map in gory detail. Of course, there's no GPS tracking, but if you're just trying to save taking bulky paper maps on your holiday then this may be sufficient. Taking the old-school approach and adding a modern twist, this does a great job of taking a paper map, handling the photographing and calibrating, and giving you a moving map display on top of a (hopefully) properly calibrated scanned map. You can get the idea from the trial, though you'll need to pony up the small £2 or so for all colours and functions. [Editorial note: I used stock screenshots for Mapsnap GPS because my own local paper map had 'gone missing'(!) - I used a low grade map printout to verify it all worked as advertised though.]

The calibration of scanned maps used to be tiresome, but it's made effortless here by the tie-up with Bing Maps - by pointing to two or three points in both the scan and on the online digital version, the latitudes and longitudes, plus scales, are automatically lined up internally, with very little work needed by you, the user.

Helpfully, the moving map track stays 'solid' and the current direction is always 'up' the screen, so Mapsnap GPS is useful for anyone, however bad their map reading skills.

Having started bemoaning the lack of Viewranger for Windows Phone, we've ended up with over half a dozen options, any or all of which may suit your hiking or mountain biking needs. And all but one are free, or nearly free.

Give them all a try, by all means, everyone's needs are different. If you have a paper map to hand (or at the local library) then you might like to try Mapsnap GPS first. If you're working completely online then perhaps start with the strangely named 'maaloo Outdoor'. If you're desperate for offline maps that don't need cell coverage then go for NaviComputer. And if you're in the UK, start with GeoGPS and be prepared to dip into your wallet after the first week!