You may remember that I produced a FAQ for Windows 10 Maps back in July, based on an early version of the software? Most of that still holds, but there was a big question mark hanging over the real time traffic elements of the application/service. So I decided to head out into the South of England on a busy Saturday afternoon and see how Windows 10 Maps coped, here on a Lumia 930 running the latest build of everything.

Firstly, I should mention that Windows 10 Maps does tie into national traffic systems, at least here in the UK, so there's an awareness of the speed of traffic at major junctions and on motorways, plus there's a database of roadworks and lane closures (which turned out not to be that detailed, but more of that below). Thus, when navigating to a destination, as shown below, the ETA is for the calculated route allowing for all of this data. As I travelled, here on dual carriageways and motorways, the ETA didn't change even when hitting the very slow traffic shown below, indicating that this was all allowed for: 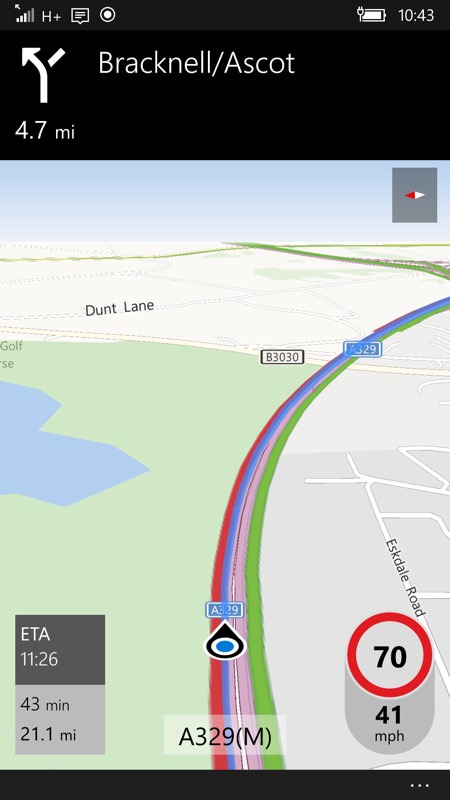 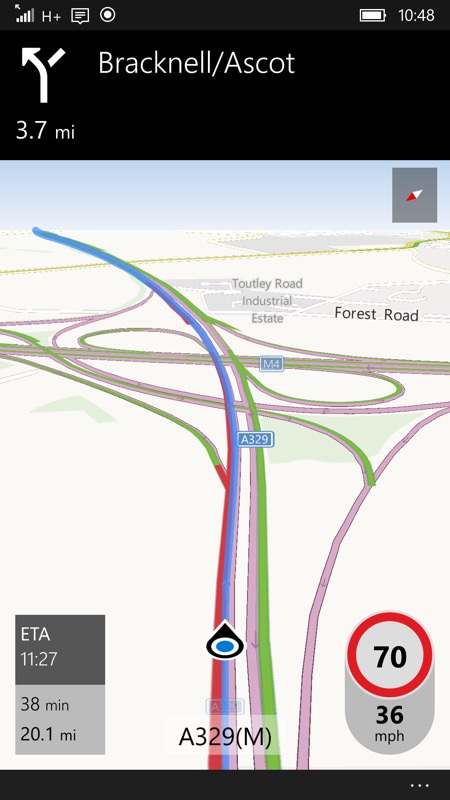 However, Windows 10 Maps comes a little unstuck when faced with more local, smaller road closures. For example, travelling along a major suburban road I know very well in Aldershot, Hants, I was given the all clear to go straight ahead, whereas in reality (see the photo) the road was totally closed. And, thanks to my local knowledge, had been that way for well over a week now ("Lower Farnham Road", if you want to look it up). 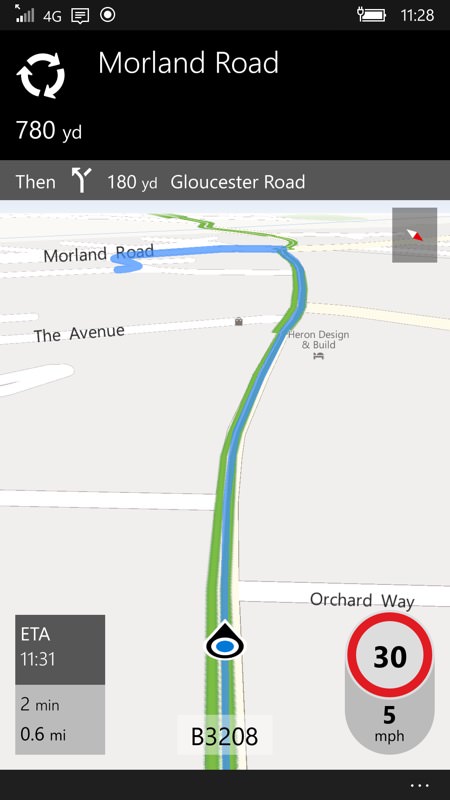 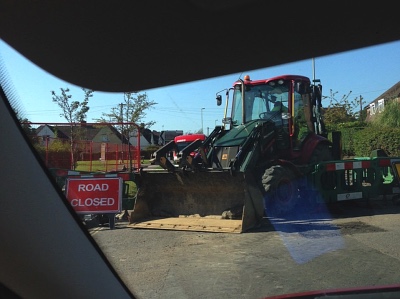 In practice, I had to use my local knowledge to route around the problem, driving three sides of a triangle, with no help from Windows 10 Maps until halfway round the road network.

Any road closures of more than a few hours (let alone days) should surely be logged in national databases and used by applications like this? Interestingly although Google Maps also didn't show the road as actually closed, it had marked it as 'red' and routed round it as avoiding near-stationary traffic.

Google's navigation functions are all fuelled by the many people running the software on their phones in real time, of course, i.e. traffic is much more granular and up to date. In contrast, Windows 10 Maps had no knowledge of the stationary traffic in the two circumstances below (look at my speed, bottom right) and so routed me straight through it. Rather unforgiveably, both hold-ups were caused by long term road works about a mile up the road. 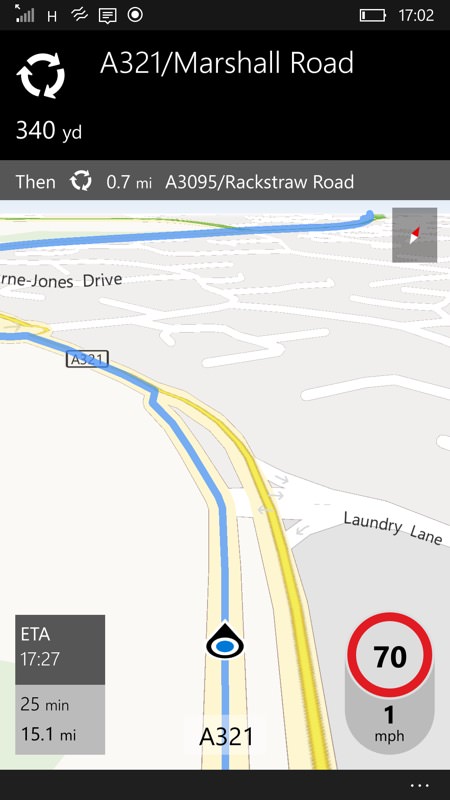 Two more points of note - the traffic 'layer' and functions have to be turned on manually in Windows 10 Maps, from the toggle in the pop-up shown below, left. And, annoyingly, you have to do this every time you re-start the application, i.e. the setting isn't sticky. So in real life use you'd be planning a route and not aware that problems hadn't been allowed for. 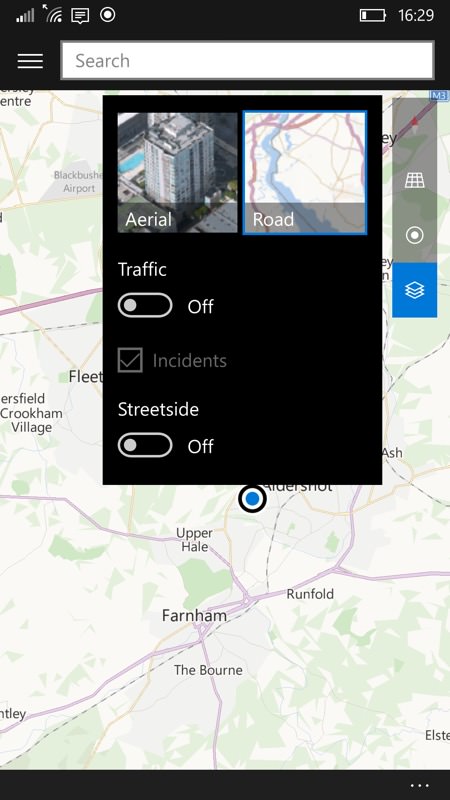 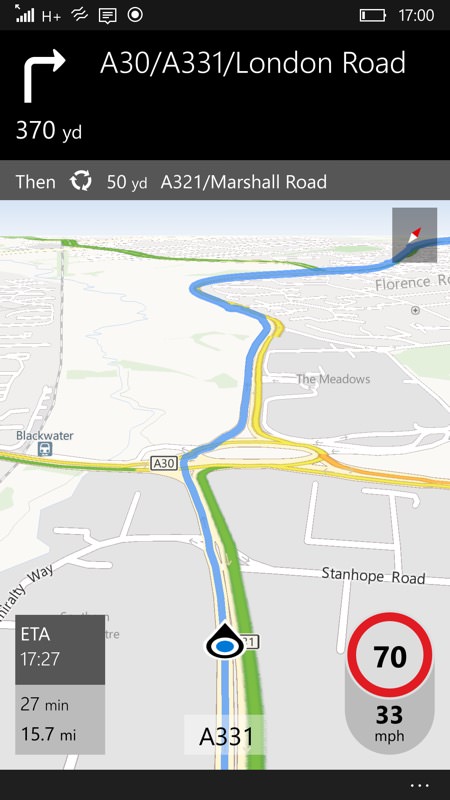 Secondly, I encountered several stretches of road where the actual speed limit is different from that reported in Windows 10 Maps. In the example above, right, it's been 50mph for several years, yet the application insisted it was 70, i.e. national speed limit all the way along, until past the junction (with Stanhope Road).

The errors are down to HERE, probably, which is still used for mapping data in most countries. Even though we've had numerous map updates for HERE Maps and Windows 10 Maps in the last year, still errors like this persist. I can only think that the HERE cartographers rely on the general public reporting errors and I have to confess that, in almost a decade, I've only ever reported one map error. So either few people notice the wrong limits (most are right, after all) or few can be bothered to go through the hoops of reporting them.

Everything's a matter of perspective, of course. Back in the early 1990s, I made my name with Mapper, a GIS (Geographical Information System) running on Psion palmtops - giving people towns and approximations of the path of major roads (in the UK, France and Ireland)

From there, we had commercial companies coming in, with Microsoft's bought-in Autoroute, then Palmtop Software's RoutePlanner (which became TomTom eventually) and, bit by bit, the density of maps and functionality increased rapidly, while the cost of accessing it all came down rapidly. With Nokia's buy out of Navteq and the free Nokia Maps on most handsets in the late 2000s, followed by Google Maps being free too shortly afterwards, we've arrived at a place in the tech world where's it's only expected that road detail for every country in the world should be free and in extreme detail.

Not only that, but we also expect that the smartphone applications (which, after all, are almost always 'online') know about what's ON the roads in real time and that any real time navigation instructions will take this into account. Given the size of countries and the complexity of road networks, this is a very ambitious task but in my testing Google Maps gets incredibly close, adjusting routes in real time to reflect live traffic information (sourced at least partly from live users out there on the road in front of you), with bonus features like showing on-screen the time deltas for road junctions coming up (e.g. "4 minutes slower" for a side road, so that you know not to dive off down it).

Windows 10 Maps is clearly some way short of this ideal. While it can recalculate routes on the fly, even offline (unlike Google Maps), there's simply not enough real time data in its service layers to enable intelligent traffic-aware routing. In fact, you can see from its limitations just why Google has never bothered re-engineering its product to work fully offline - being ONLINE is integral to its vision for smart real time routing. So, with no other cars on the road and no data coverage, Windows 10 Maps wins out (as Nokia Maps and HERE MAPS did before it), but in a real world driving environment with congestion and incidents, I know which one I'd rather be depending on.

It's doubtful that there will ever be enough of a critical mass of Windows 10 users on the roads to be able to crowd-source road speeds in the same way (as Google Maps), but there's no reason that some sort of licensing deal with the 'Waze' part of Google couldn't be arranged? Mind you, we know how previous licensing deals with parts of Google have gone, so don't hold your breath...

Comments welcome if you too have been trying Windows 10 Maps out in real world navigation environments. How did it work out when things got tough? 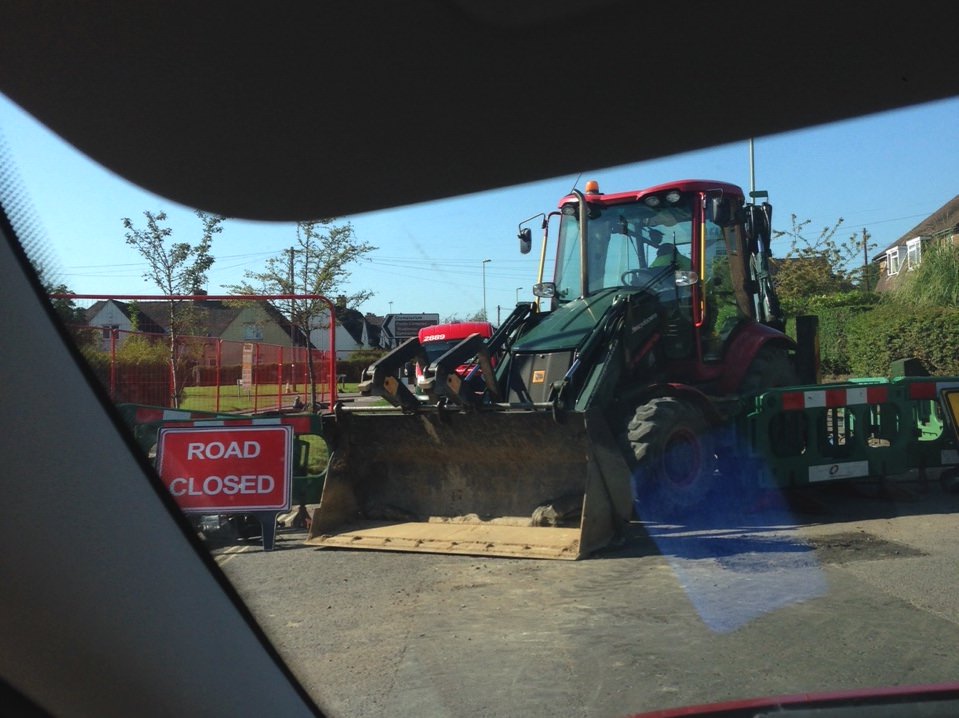