I often use the phrase 'by popular demand', but this time it really is. The Lumia 1020 was praised for incredible, stabilised, noise-free video capture, while the Lumia 950 sits two years on and a much more advanced smartphone in other ways - but can its video capture best the large-sensored 1020? I put both through their paces, the 1020 under Windows Phone 8.1, the 950 under its native Windows 10 Mobile. 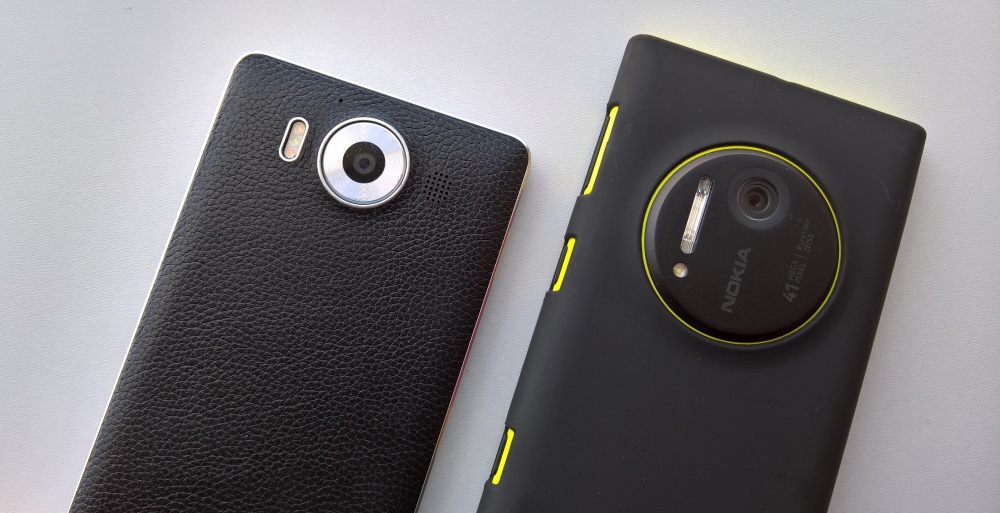 As usual with my video tests, for much of the time I use a custom jig to keep the test smartphones rigid in relation to each other, making sure that vibrations and movements are the same for each. Apart from the 'gig' section of the test, where I'd have got thrown out of the venue for using something outrageous and where I had to be discreet, so filmed with each phone in turn; here, it was all about coping with high volume though, I wasn't testing stabilisation per se.

Before heading into the testing, it's worth laying out a few video capture specs and guessing how things will pan out:

* in the split-screen (first) section of video below, I refer in the audio commentary to '6x' zoom for the Lumia 1020. Oops. That'll teach me to quote something off the top of my head without checking first!

Looking at the specifications, I'm expecting a pretty fair fight - the larger sensor and greater zoom capacity of the Lumia 1020 are offset by the (relatively) greater light ingress into the Lumia 950's camera module, by the more modern sensor and by the vastly greater processing power, capable of handling interpolative digital zoom on the fly. On the stabilisation side, the extra digital stabilisation of the 950 plus the faster and more accurate MEMS OIS should provide the winner.

But it's going to be close. On with the tests...

In most of the footage, I've commentated as I go in the audio track (which I've marked at switch points from one to the other phone). See below for my conclusions and analysis though. As usual with video material, maximise your playback window and set the quality to 1080p - and even then, bear in mind that you're seeing the original footage after it's been through iMovie rendering and YouTube re-encoding. Still, it's the same for both phone cameras, so we can still draw comparisons, I contend:

Breaking down the video into its sections, with comments, then:

Two things become very evident from this footage. One, that the larger, higher resolution sensor on the 1020 still produces the highest quality zoomed video - as you'd perhaps expect, the original concept for that 41MP sensor and 'PureView zoom' still works as well as it ever did. And again, apologies for mis-speaking in the audio commentary, it's 4.5x zoom, not 6x!

Secondly, that the OIS in the 1020, famously based on ball bearings(!) is somewhat clumsy in operation compared to the nimble, more conventional OIS mechanism in the 950 camera and that, surprisingly, the extra software stabilisation introduced with Windows 10 Camera is very effective indeed. The combination of the two creates a convincing steady-cam effect, spoilt only in low light, as we'll see below.

Just some ad-hoc footage, taking advantage of a little weak winter sun. Shot through a windscreen too, but no less of a test. The 1020's zoom again wins out on clarity and detail, while the 950 stuns with how steady its zoomed footage is, and with digital zoom in video mode not doing too shabby a job. If I were to be critical then I'd say that the 950 overexposes when shooting videos a little, you'll see this in most of the videos in this montage.

Very low light and focussing is the main issue here, with the 1020 having the most problems (it gets it wrong completely at the end of this segment and I had to fade it out to save its blushes!) Again the 950 overexposes the scene, the road was darker than it makes it look, but at least focussing was mostly OK.

Walking in the dark shows up a weakness in relying on digital stabilisation, with the 950 footage showing 'jello-vision' wobbling as the algorithms cope with near impossible conditions. Still, it's worth noting that this can be turned off, so that the 950 would just use its OIS - this would probably have worked better, in hindsight. The 1020's footage is jerkier but amazingly crisp and clear - and better exposed overall. See what you think.

And so to the biggest test of all - rock gig levels of volume to test the stereo audio capture, filmed up close, with low light, flashing colours, and still needing zoom to get 'close' to the players. I've filmed these segments back to back, rather than at the same time - I couldn't face explaining the two-phone jig to everyone else at the venue! But it gives you a better look at the strengths and weaknesses of each phone's video capture under extreme conditions.

The good news is that the 950's HAAC microphones performed well, with no distortion in the loud environment. In the clip above, there's very little coming from the left channel, but this has now been traced to a rubber seal whose glue had slipped - see here. The bad news is that there's not as much bass as there should have been - I'm wondering is the 'bass filter' from the old Lumia Camera software has been incorporated as default and there's now no way to turn it off. Which is a shame, though the audio's still usable. The 1020 audio is exemplary as usual, of course. I'd have liked a little more top end crispness, I think the older 808 PureView would have nailed this aspect even better.

In terms of picture quality, both phones do well, and stability is fine, thanks to me being knelt down and holding the phones in both hands, so there wasn't much wobble to worry about, even when zoomed. The 950 video does show more obvious digital noise when zoomed in, and there are some odd artefacts at some points as a result, but this is deep in digital zoom territory, so we shouldn't be surprised. In contrast, the 1020's zoom shows up some noise, but it's never an issue and this phone remains one of my top picks for gig footage such as this.

You'll be wanting a winner, of course. Tricky!

Both smartphone video cameras have pros and cons - and I'd welcome your comments and opinions - but for me the 1020 edges it in terms of raw quality and ability. Then again, the 950 also has the 4K and 8MP frame grab tricks up its sleeve, and is much more capable away from camera functions, and it's not that far behind overall. In addition, we know full well that there are significant improvements still to come to Windows 10 Camera on the video front, using the microphones better, integrating Dolby Digital, and bringing stereo capture back to W10M on older devices. So the 950 (and 950 XL) should hopefully continue to improve.