Windows 10: the differences between Mobile and Desktop

It's all very well Windows (phone) fans talking about Windows 10 Mobile being 'just part of the huge Windows 10 ecosystem' - and Windows (phone, err...) bashers talking about Windows being dead on mobile. Neither party is really telling the whole story, as you can imagine. In the interests of chipping in with helpful facts though, as AAWP is wont to do, here's the truth, shown below in chart form, a picture hopefully being worth a thousand words...

I was prompted to do a little research and do try and depict all this graphically after numerous discussions in AAWP comments and on social media as to just how much part of 'Windows 10' the mobile SKU, 'Windows 10 Mobile' is. We've talked a lot in features and in on the podcast about the half billion strong Windows 10 ecosystem and although it's slightly disingenuous to imagine that this is all directly relevant to mobile, it's not entirely irrelevant, either.

You see, Windows 10 for Desktop and Mobile have far, far more in common than they do in terms of differences. As the chart below shows, Microsoft's move to integrate all their platforms over the last two years has paid dividends. In addition to Mobile and Desktop here, there's 'ioT' (Internet of Things), Hololens, XBox, and so on. All with the same common code, as shown in the central overlap below: 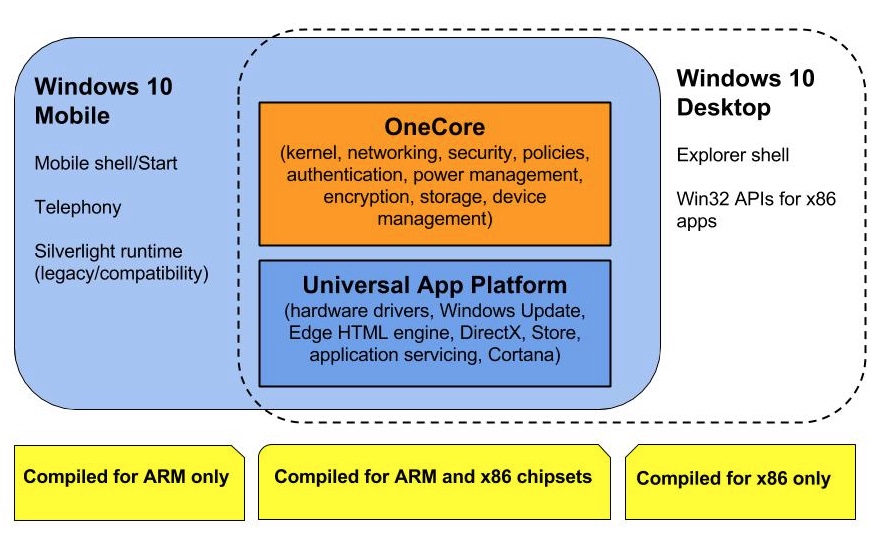 On top of the modules and systems shown in the chart, there are the actual first party applications, of course (e.g. Outlook, Mail, Maps, Groove), though these are nearly all UWP (Universal Windows Platform) applications these days and are also common to multiple variants of Windows 10. And then there are all the many third party UWP apps as well, most of which work just as well on phone, Continuum displays and desktops - they really are (for the most part) 'universal' too.

Although Microsoft has effectively - and hopefully temporarily - withdrawn from the first party phone hardware market (that's a rant for another day), it's clear that there's a lot of maturity that comes with Windows 10 Mobile now. Currently the 'Anniversary Update' (a.k.a. Redstone) is the production version, but the 'Creators Update' (a.k.a. Redstone 2) is due for release in April 2017, and it's quite a bit faster and sleeker, as current Fast ring insiders will attest.

Microsoft has already demonstrated 'Windows 10 on ARM', of course, the idea being to go back to Windows (NT)'s roots in running on multiple chipsets, for better portability, to reduce the dependency on Intel, and to establish better battery efficiencies in largely mobile hardware - phones, tablets, hybrids, etc. You can think of 'Windows 10 on ARM' as taking the few items in the white outlined area on the right above and optimising/compiling them for ARM too.

This raises an interesting question for the future - if everything above works on ARM then we only have one stack, one panel and a simpler chart - and the only differences in how Windows 10 looks and behaves will be in terms of the form factor it's running on and any minimum screen resolutions, for example. I can envisage phones, phablets and 7" tablets putting up the Start shell as we know and love it today, while 10"+ tablets, netbooks, hybrids and laptops will put up the rejigged 'Explorer' Start shell. But behind the front end user interface, there will be no difference whatsoever.

It's a compelling vision of the future and Microsoft's integration vision will have finally matured. Now all we'd need would be hardware to run it all - we have plenty of tablets, hybrids and laptops, but we're going to start needing more phones and phablets pretty soon, certainly by the end of 2017.

Anyway, hopefully you'll find the chart worth bookmarking, for the next time you wonder just what the heck is common to Windows 10 Mobile and W10 on the desktop...

Filed: Home > Features > Windows 10: the differences between Mobile and Desktop