No new flagship Lumia? Give your 950 XL some Mozo loving!

The disappearance of the Lumia 950 XL from sale across the world over the last three months has been disappointing, not just because it was Microsoft's flagship phone but also because the 950 XL is still a terrific smartphone. A market-leading phone camera, a glorious screen, plenty of RAM, a decent speaker (after it has been tweaked) and, best of all, the nigh on unique feature (in 2017) of having a user replaceable back and battery. Making it a doddle, in the absence of a new phone replacement, to simply freshen up with some Mozo (and battery) love.

(There's more to freshening a smartphone than swapping out the back and battery, of course, so watch this space for a tutorial on cleaning up the OS and applications too.)

I've featured various Mozo leather backs for the Lumia 950 XL before, of course (here and here), but never a wooden one. There's something rather special about the feel of real wood in your hands instead of metal, plastic or glass - and here we have 'Light Oak' and 'Zebra Wood', courtesy of those nice folks at Mobile Fun, here's their Lumia 950 XL accessories page worldwide and the 950 XL accessories page for the UK.

As with Mozo's leather replacement backs for the Lumia 950 XL, the genuine material (i.e. leather or wood) is bonded onto plastic - making the overall back slightly thicker than the Microsoft original (thin) plastic, but who cares when your Lumia flagship just turned to real wood? 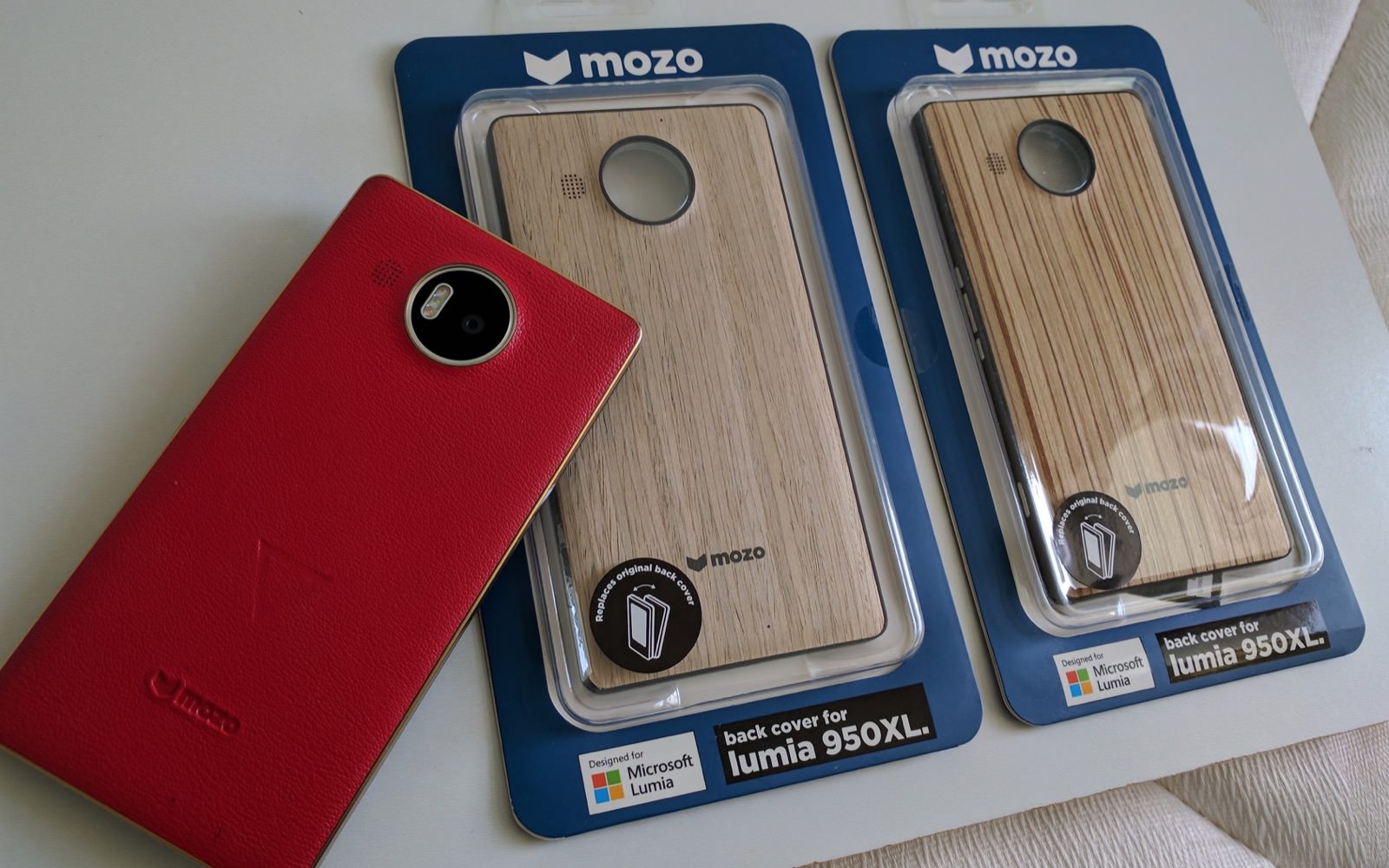 As usual with the Mozo backs, in addition to the natural materials, the insides of the plastic backs are identical to the Microsoft originals, i.e. with NFC antenna, speaker and microphone acoustic gaskets, Qi charging coils - it's a complete replacement. And this partly explains the cost (up to £40), which I'll come back to below. 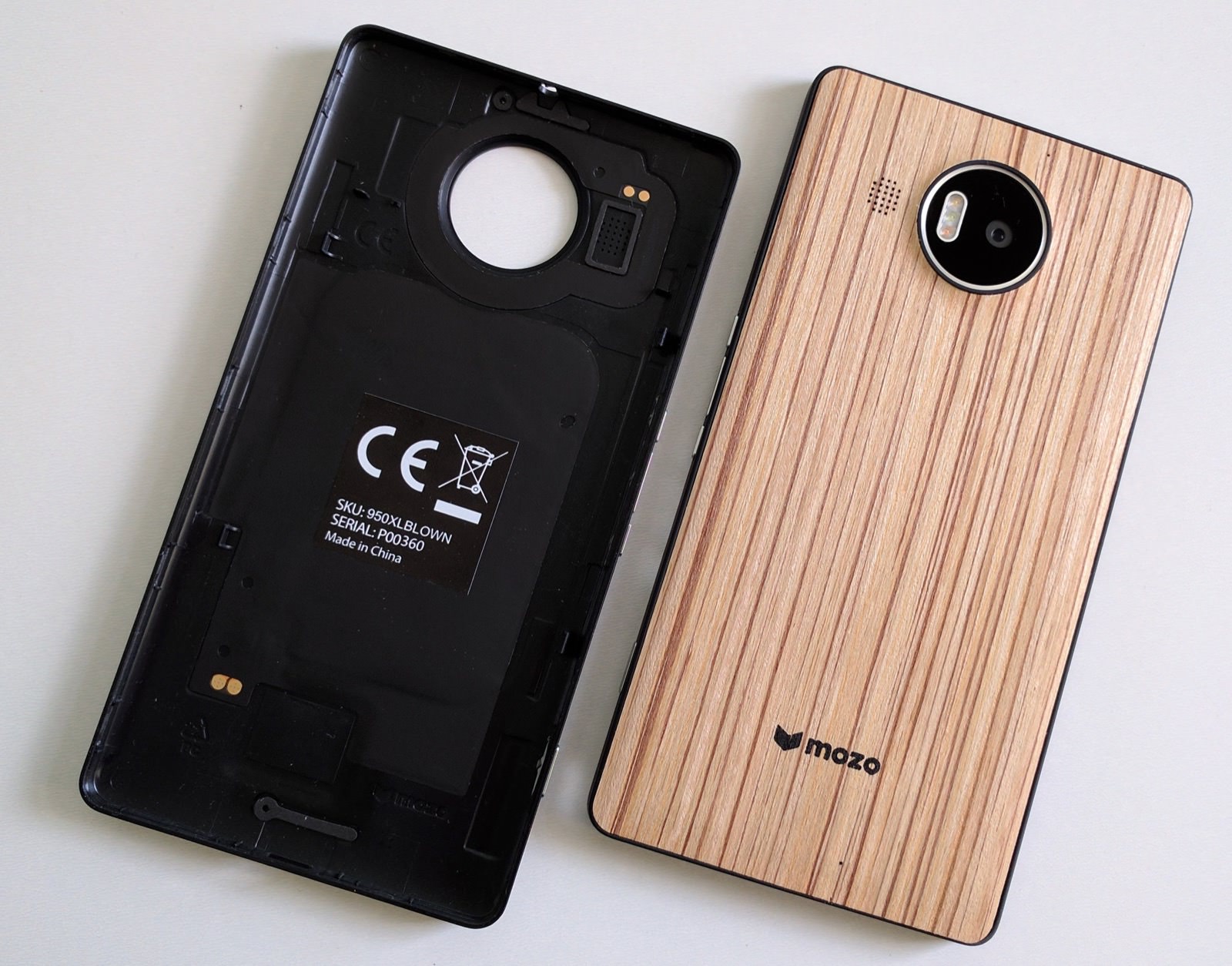 The attention to detail is terrific on Mozo's part, with just the odd small irregularity in the Zebra wood version shown above - but then this is a natural material, we're not talking wood-effect plastic here, so some natural variations should be expected. It's part of the charm of the Mozo concept, whether leather or wood. The 'Light Oak' back is shown below: 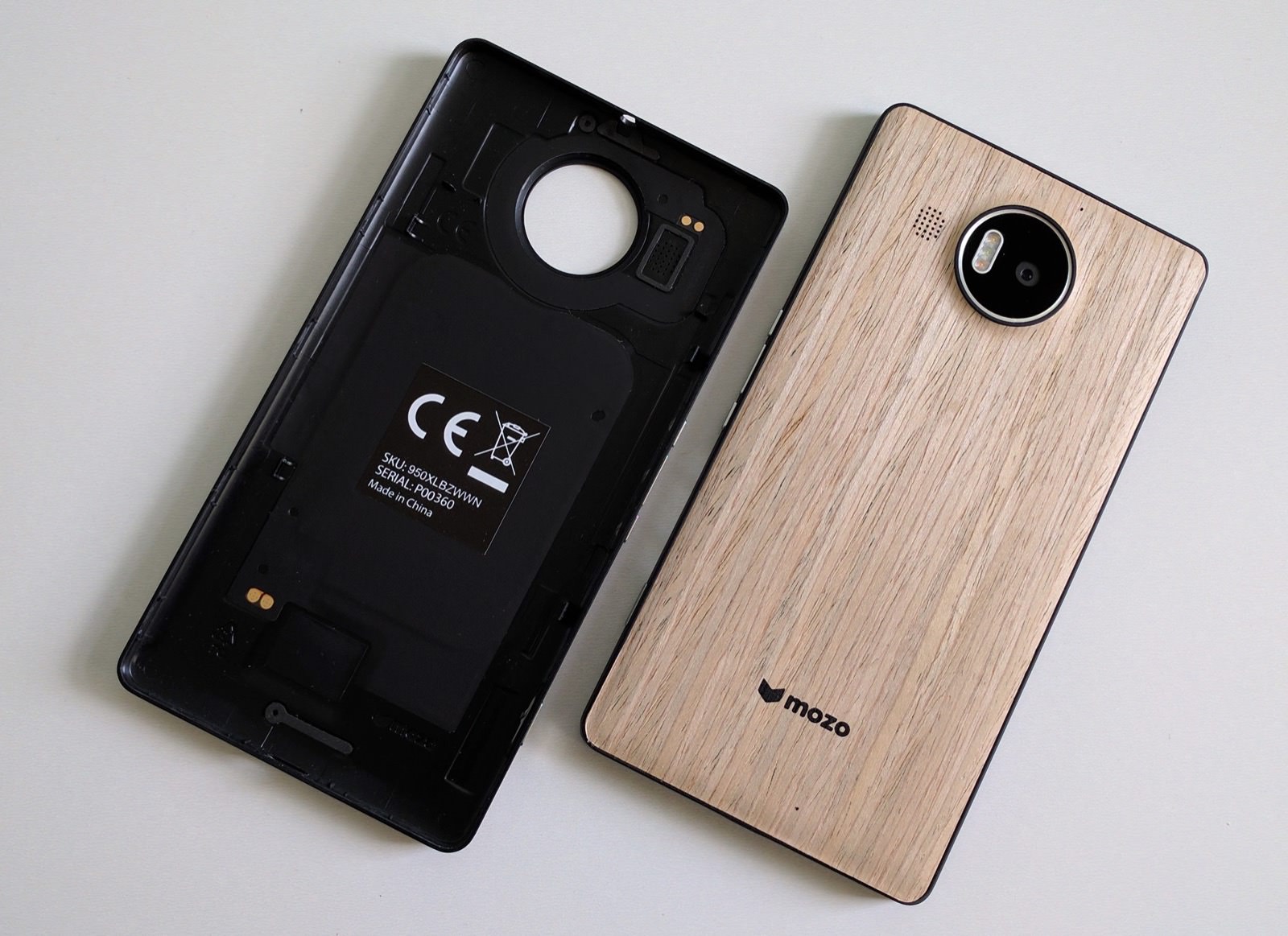 Of note is that Mozo vary the coatings and colours of the Lumia 950 XL back sides. From thin painted silver on the first leather samples I looked at (which tended to rub off at the corners after a while) to thicker gold paint on the later samples to (here) grippy matt black rubberised paint that feels like it should be even more hard wearing. 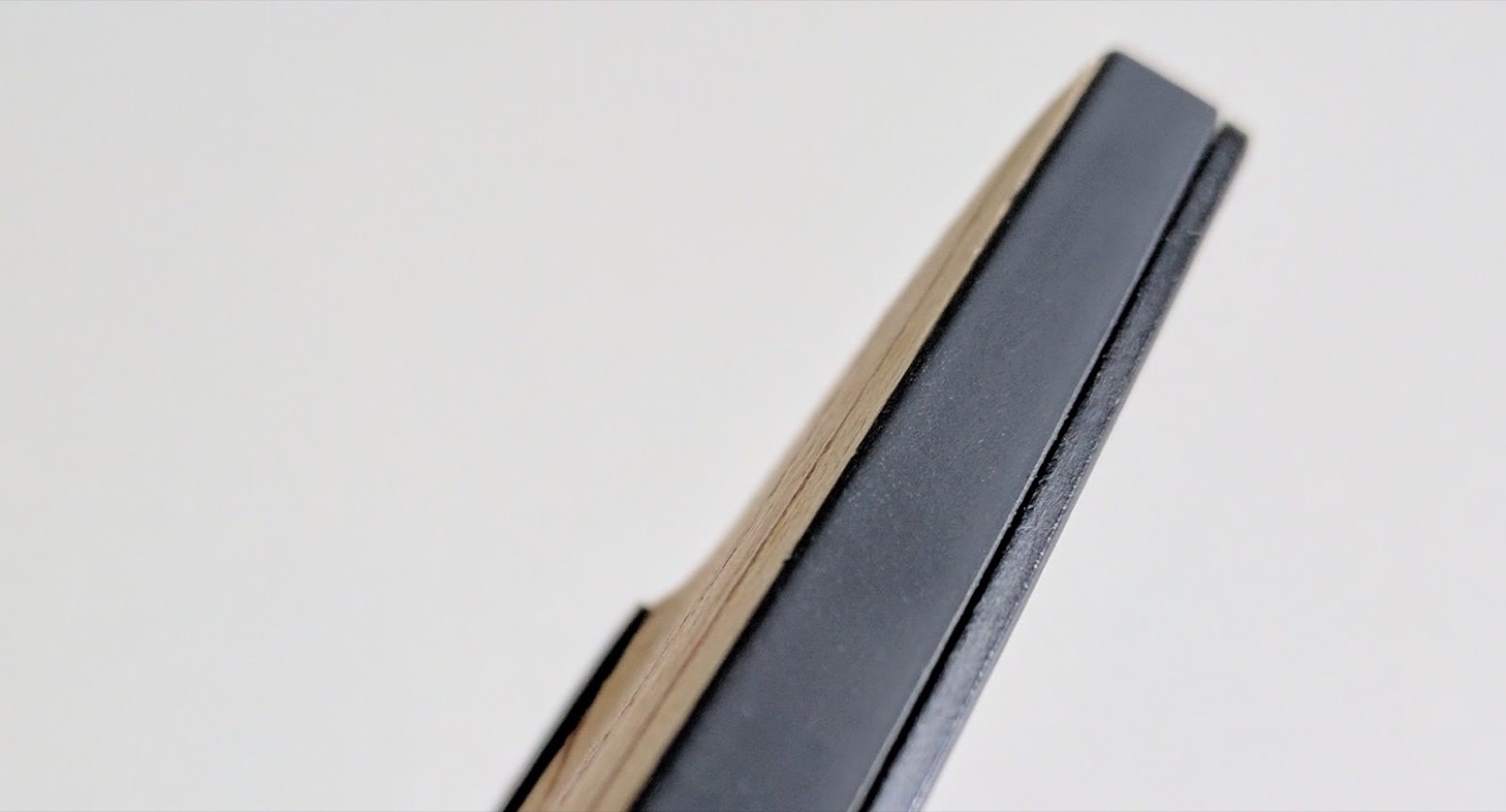 Up close, the Mozo wooden backs are tremendous in terms of (natural) texture - you'll find yourself running your fingers over the back of your Lumia 950 XL in meetings and enjoying the jealous glances of colleagues with their (often cracked) glass backed phones or (equally often scratched) metal backed phones. And each of those, when encased in TPU, has zero character.

Feast your eyes on the Zebra Wood Mozo back below, up close and personal - there's no actual danger of a splinter, but you get the idea. 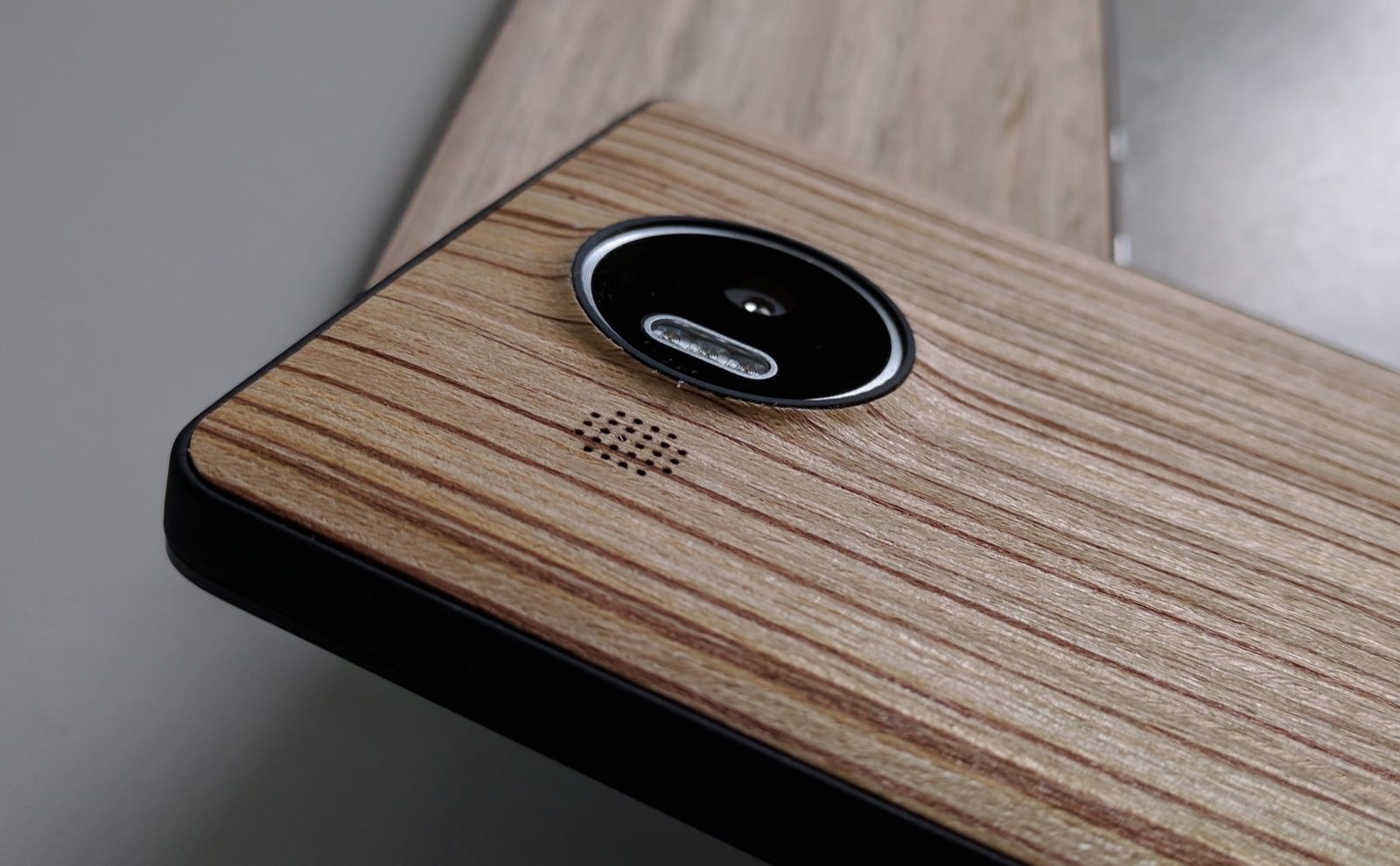 There's a certain retro thrill in seeing the speaker grille and stereo microphone holes drilled through the wood - and done very neatly too. And, unlike one of my early (950) review samples from Mozo, the holes are the right size and let sound out properly. Yes, the Lumia 950 XL speaker isn't earth shattering, but it's decent enough after my tweaks.

And so to the price. Which I don't think matters as much as it did a year or so ago, when the Mozo backs first appeared. We're now, in 2017, in the absence of any new Microsoft phone hardware (heck, your 950 XL purchase was probably at least a year ago), firmly into 'treat yourself' territory. In other words, you want to freshen up your Lumia and yet you can't just upgrade the phone to the newer model - since there isn't one. So treat yourself to a new back instead. Your Lumia 950 XL will feel new and exciting again (possibly)!

Perhaps, like me, you'll end up with something of a collection of Mozo (and original) backs and can then - quite literally - decide at the start of each day which mood you're in and then pick a 950 XL back to suit?

Also worth noting in the same context, while your wallet is open, is to treat yourself to a new battery. Your original may now be down to 60% original capacity (at worst case), after a year of charging and discharging, so why not look out and grab a new cell, keeping your charged original as the 'spare', for your coat pocket or similar? After all, there are precious few smartphone flagships with replaceable battery these days, so make the most of this Lumia USP.

I wrote up some suggestions for finding original replacement batteries for the 950 XL here, though the link now leads to 'out of stock'. Instead, note that this search on eBay UK produced some likely results that I believe. Look for good feedback, a realistic price (anything under about £12 is likely a fake, the original price from Microsoft was in the £20 region) and lack of typos in the page text!

The combination of real wood and a rubberised black surround, plus a fresh battery, has certainly injected new life into my own Lumia 950 XL, though again do note that a follow-up article is coming soon, looking at freshening up the software inside as well.

Filed: Home > Features > No new flagship Lumia? Give your 950 XL some Mozo loving!