I've had so many emails in asking me to comment on Joe Belfiore's stream of tweets over the weekend (and the reaction to it on tech sites) that I felt I had to, at least, update my ever-extending and hopefully still clear Windows 10 chart, showing what's happening to the OS. In summary, there's nothing in Joe's tweets that's new. Nothing to see, back to your homes, etc.(!)

The tweets themselves were honest, but the only thing 'new' in them was their very existence, since Microsoft's executives rarely speak frankly on Twitter. Anyway, for the record, the main ones, in response to the the initial 'Is it time to leave Windows 10 Mobile?' were:

(1/2) Depends who you are. Many companies still deploy to their employees and we will support them! ... https://t.co/LKQBL3w7gA

(2/2) As an individual end-user, I switched platforms for the app/hw diversity. We will support those users too! Choose what's best 4 u. https://t.co/LKQBL3w7gA

So nothing too shocking, in short, support will continue, but building new 'features' into Windows 10 Mobile and building new first party hardware based on W10M 'aren't the focus'. I.e. won't happen. But then we knew this already and have done so for at least a year. Microsoft is 'out' of first party consumer/phone hardware and Windows 10 Mobile, in its current 'feature2' state, is essentially 'feature complete'.

On with an updated chart anyway. The thing to note is that Microsoft has promised Windows 10 Mobile updates and security patches until at least Autumn 2019 (my chart only goes as far as the end of 2018) and that it will keep up with the core Windows 10 'branches'. So we currently have '1709' in the Fast ring for Insiders at the moment, for example.*

* whether this will be formally pushed to a wide range of phones is open to question, of course. I suspect that the 'push' will be to the same limited device set as the Creators Update

The relevant portion for Windows 10 Mobile then is the heavy red dashed area: 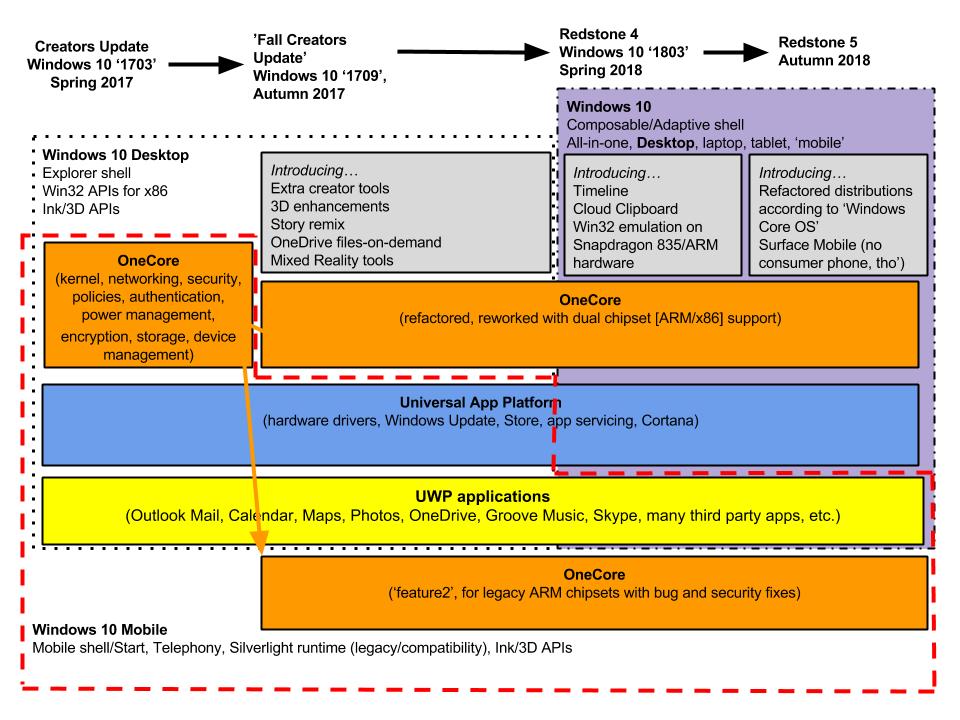 I'm not apologising for Microsoft's strategy and 'mistakes' in all this, note. They've bungled so much in 'mobile' over the last 15 years, but that's covered in other editorials. What I want to get across here - again - is that Windows 10 Mobile isn't 'dead', it's still supported. For another two years, at least, by which time other options should have presented themselves.

And the dearth of 'new features' is almost completely irrelevant - new features will come to Windows 10 Mobile users each week, each month, through the still improving UWP applications on the platform, both from Microsoft and from third parties.

Nothing lasts forever in the tech world, let alone the tempestuous mobile world. Let's take your average Lumia 930 user (something of a median on AAWP):

That's, for an enthusiast with a humble Lumia 930, a fairly full five year lifespan, for a single device. Just one data point, but five years on a single phone is unusual in the smartphone world, perhaps only a couple of iPhone models can match it for longevity.

Anyone with a Lumia 950/XL will fare better in terms of future proofing, getting the 'Fall Creators Update'/'1709' and support until Autumn 2019 and perhaps beyond, though not the same 'life span' as the 930 above.

In short, we're not blind at AAWP, we can see that the times, they are a changing. But let's not go off half-cocked, your Windows phone isn't going to suddenly stop working, it'll carry on getting important updates, new apps and app updates via the Store for quite a long time yet.