The Nokia 9 PureView launched a few weeks back and I've written optimistically about it in my feature 'The importance of zoom, and continuing the PureView brand'. It's not PureView in the traditional sense though, and heck, it's not the same Nokia that launched the original 808 and 1020, so maybe I was getting my imaging hopes up too much? AAWP regular and Nokia/Lumia old-hand Mark Swidler has leapt in with photo samples and comparisons against the trusty 2015 Lumia 950 PureView. 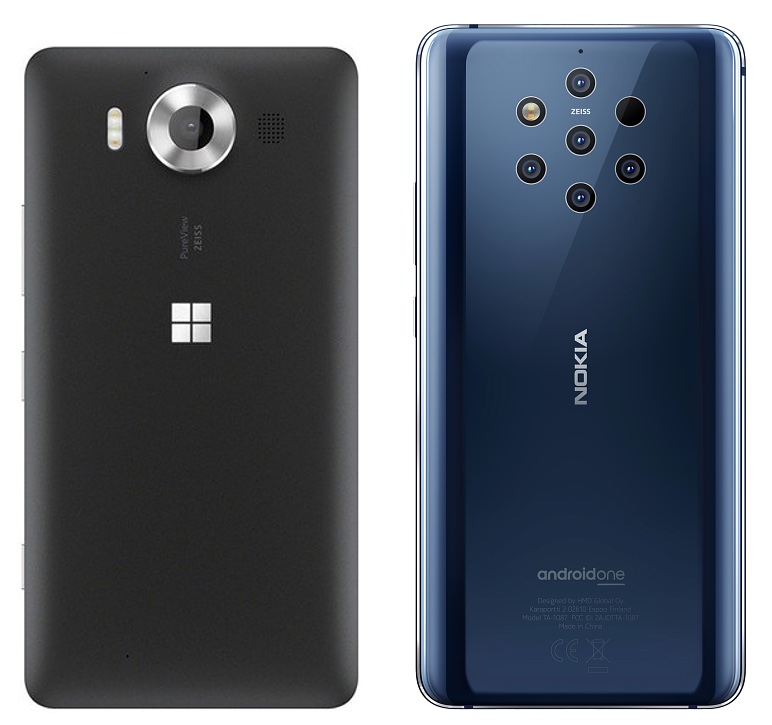 NB. I gave Mark specific instructions on test shots, resolution, and delivery to me. So he was shooting the Lumia 950 in its PureView oversampled mode of 8MP, both to get best quality and also to allow direct 1:1 comparisons with the results from the Nokia 9. I realise that analysing someone else's photos is fraught with danger, but in this case he's taken more or less what I'd have shot. I've asked Mark to send more examples after the next big Nokia 9 update, too...

Mark also, helpfully, provided some notes to go along with the samples, which I've packaged into the usual AAWP comparator system:

DO NOT TRADE IN YOUR LUMIA 950! The new Nokia 9 Pureview is a mixed bag. Some pictures are clearly better than the Lumia 950 while others are far worse...

The screen on the Nokia 9 is clearly better than the Lumia 950 and when the sun strikes the screen directly, the Nokia is very usable while the Lumia was not nearly as good. The pictures near sunset are better on the Nokia and the dynamic range is surprising. There was one moment that the Nokia had a bit of color wrong on the end cap of a wood bench, but I didn’t get a picture to show you. The sun was very orange and just a small part of the wood and that color shifted to yellow/orange. Generally, the Nokia shoots great pictures if there is sufficient light. When I do a max zoom on the Nokia, it says 5X if that helps. And again, the HDR screen is quite stunning if not a bit over saturated. It reminds me a bit like watching Netflix 4k HDR programming which has more punch.

In a very dark room, it was hard to frame a picture with the Nokia because the screen appears to be near BLACK. And the pictures are not much better. Lumia is better here.

When I took shots outside in at night, again the screen was very dark and hard to frame but the pictures accurately looked like what the native eye sees while as you know, the Lumia lightens the shot and digs deep and finds detail that my eye can not see. In this case, I would prefer the Lumia.

I wish I had a contact at Nokia support so that I could share my thoughts, frustrations, and things that made me smile. Those included the true refocus which does work as expected although we had similar with the Lumia with the refocus app that took a group of pictures at different focal points (much slower of course). I am still a Windows Phone/Mobile fan and the logical feature set that W10 brings me. Android seems to be designed by 30 different people who didn’t conform to some standards. Items were added without thinking about the whole big picture considered. Clearly, I need more time to spend with the phone, but the biggest weakness is the LOW LIGHT SENSITIVITY. I surprise my friends often with other phones when I take pictures with my Lumia in low light conditions and show them the result. The Nokia is not able to do this!

Thanks, Mark. Though I'd disagree with 'clearly better'! On the subject of the in-display fingerprint scanner being 'worthless', I'm not at all surprised. I ranted about this technology here in video form and I've heard of users returning their Nokia 9 units within a day or two because the finger unlocking just doesn't work. At least, not yet - I'm sure more tolerance can be applied in an update, at the expense of less secure authentication.

Let's pit the results against each other, using our Famed Interactive Comparator (FIC). All 1:1 crops are at 900x500 for comparison - due to technical issues with our server ("RAFE!!!!!!") I can't deliver all full resolution originals for your own analysis. Sorry. [Update, by popular demand, I've put the Nokia 9 photo originals on my own server, see the links below]

A car lit by late afternoon sun. Ideal conditions, no problem for both phone cameras. Here is the scene as presented by the Nokia 9: 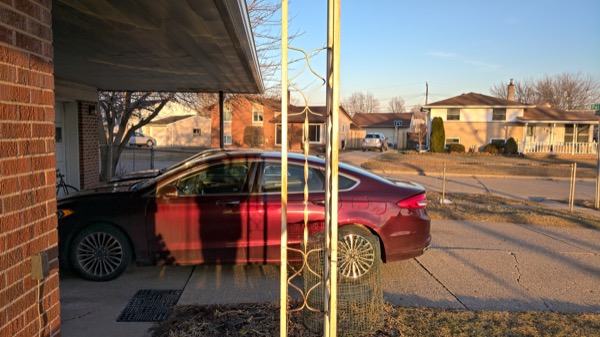 To look at the images in more detail here, here are fairly central 1:1 crops, just wait to make sure the page has fully loaded and then use your mouse or trackpad pointer to compare the images: 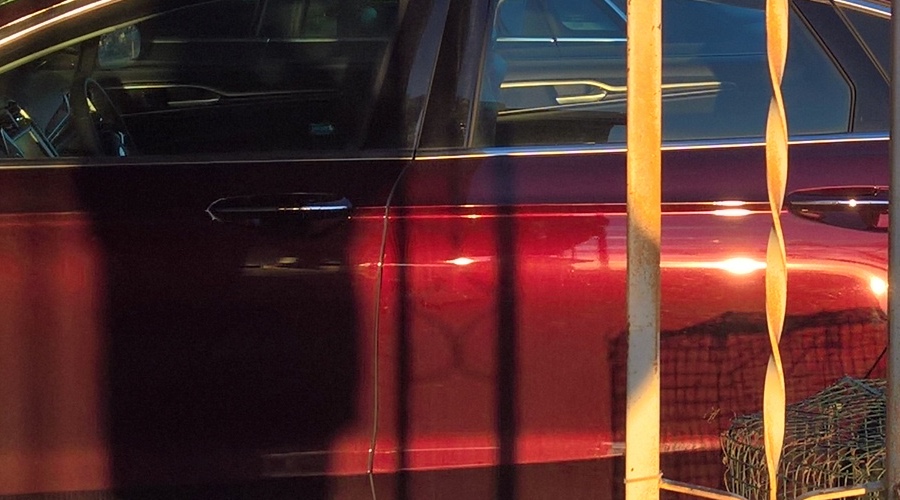 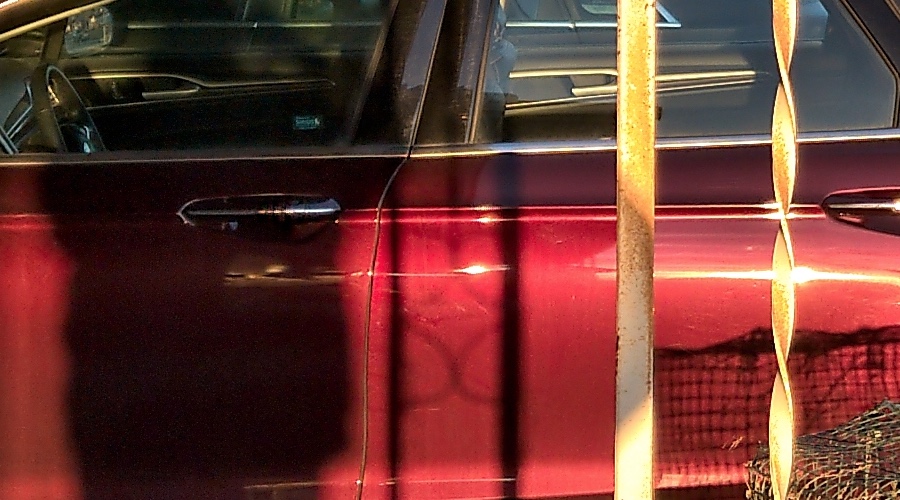 Decent snaps, of course, but the Nokia 9 introduces too much image sharpening for my liking. The 950's shot is definitely 'purer' and more natural. The Nokia 9 does manage to pull out detail in the shadows and has high dynamic range, but it's not enough to take my eye off its oversharpened results.

The Lumia 950 has 1.5x lossless zoom, but that's it.... while the Nokia 9 makes no big pretensions on zoom (yet) but you have to figure that it can do something, given the five camera lenses! Here is the unzoomed scene as presented by the Nokia 9: 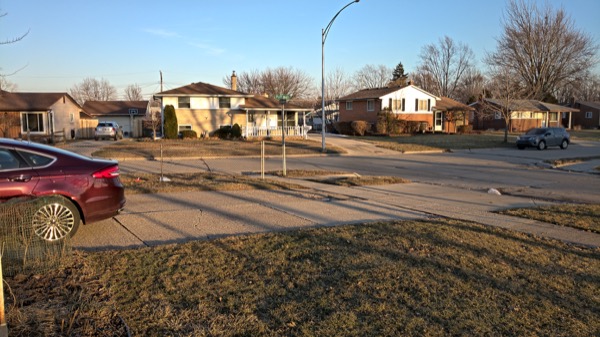 You can grab the Nokia 9 original unzoomed photo here on my own server, for your own analysis.

Mark then zoomed in to around 3x on each phone camera. Here are fairly central 1:1 crops from the zooms, just wait to make sure the page has fully loaded and then use your mouse or trackpad pointer to compare the images: 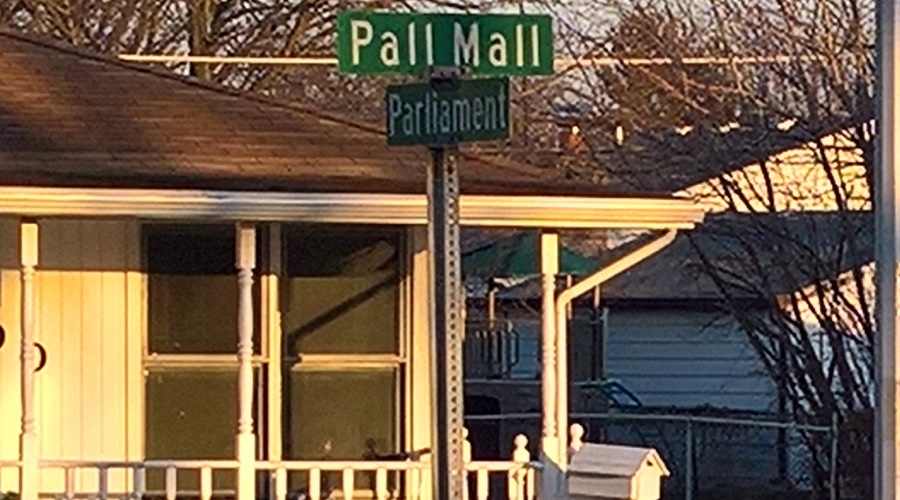 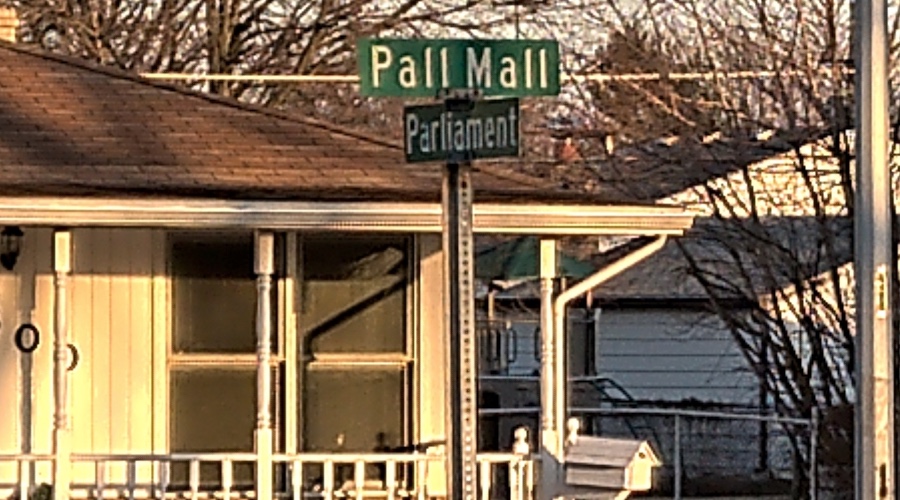 Neither zoom shot is particularly good, as you might expect, but I'm going to give the comparison to the Nokia 9 by a nose. I do get the impression that Nokia's software people can do more in terms of 'hybrid'/computational zoom and that this will come in a software update. In the meantime, it's a point up here.

Shooting straight into the setting sun, a test of dynamic range and resolution. Here is the scene as presented by the Nokia 9: 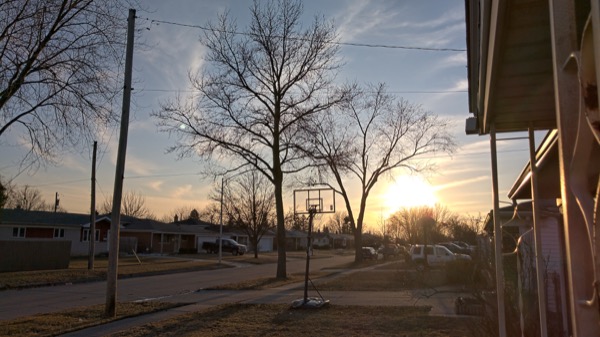 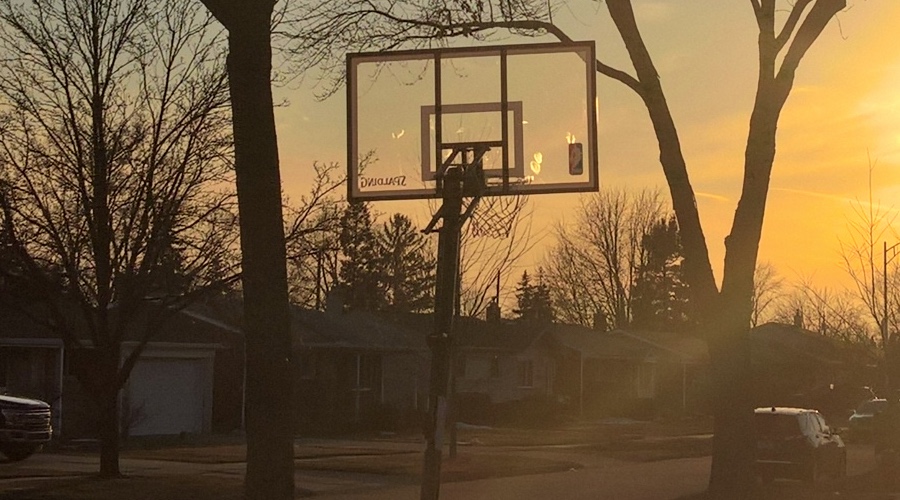 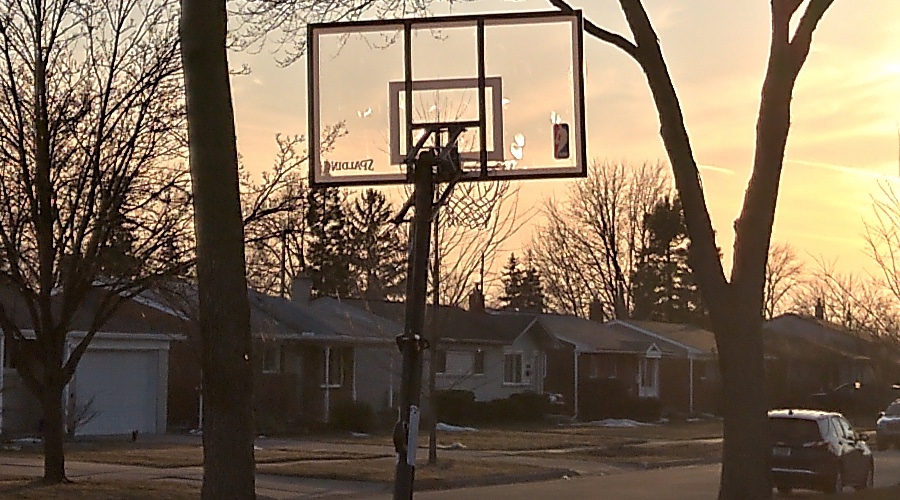 This again is a margin call - I prefer the purity, genuine detail and colours in the Lumia 950 shot, but some may prefer the high contrast, sharpened approach from the Nokia 9. I'm right and they're wrong, but hey....(!)

A test of what the phone cameras can pluck from a dark room, with Mark hardly able to see what he was shooting(!) Here is the scene as presented by the Nokia 9: 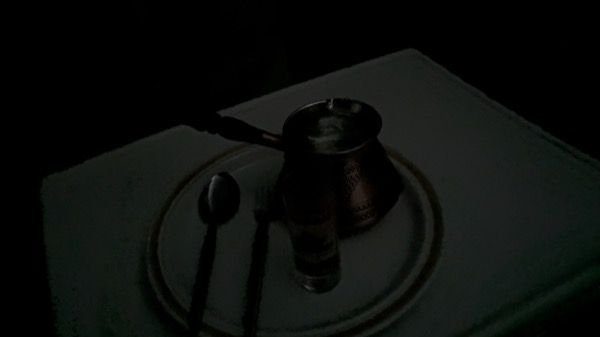 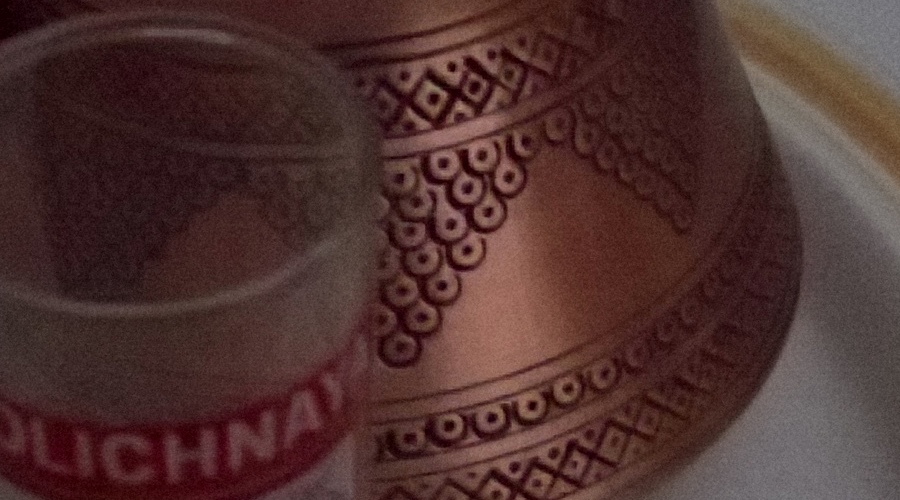 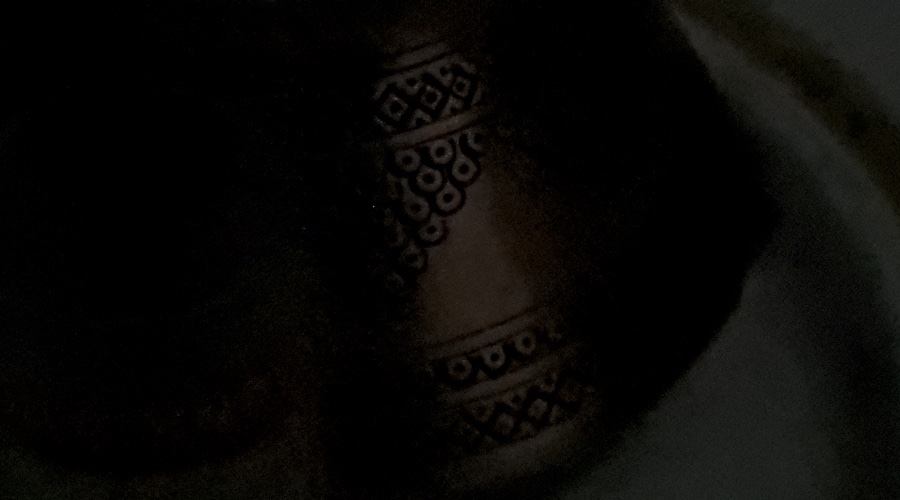 No arguments here, the Lumia 950's excellent OIS makes short work of the gloom and brings out colour and detail, while the Nokia 9's unstabilised cameras are in a different league. A lower one, this is the sort of shot camera phones were taking in 2010, for goodness sake.

Night time, with only street lighting, but plenty of suburban detail. Here is the scene as presented by the Nokia 9: 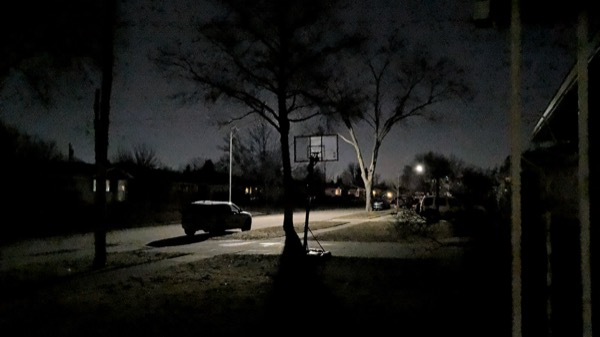 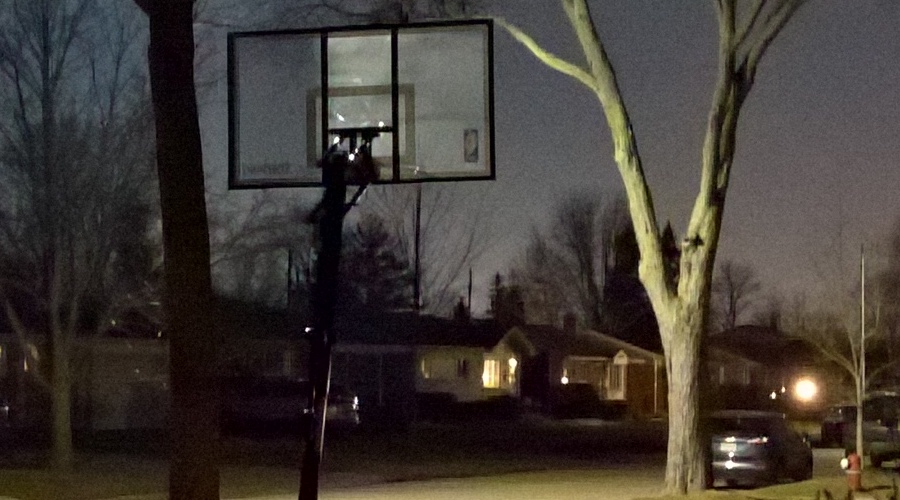 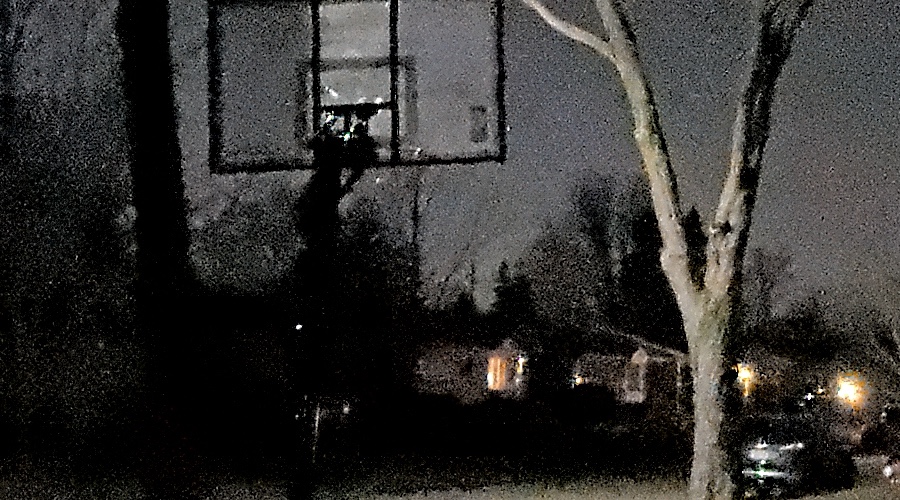 Ghastly, when looked at in detail. The overview looks OK at web resolution and then you see this mess at the pixel level. I cannot believe how badly the Nokia 9 currently performs, in terms of pixel 'purity', in low light. Again, we're looking at a modern (even if 2015!) smartphone camera against something from a previous era. Sorry, Nokia, but I think missing out OIS on any of your cameras was a horrible mistake. Maybe it's a good thing the Nokia 9 is a 'limited edition' - try again in a few months with a '9.1' with OIS on all the cameras and software alignment to keep detail clear.

As if a total was needed, but for the record:

This was all after Nokia's big update for the '9', but clearly there's more work to be done. As noted in the low light tests though, this current hardware is utterly hamstrung by the absence of hardware lens stabilisation. Yes, Google's original HDR+ camera software for the first gen Pixel in 2016 managed without OIS through some clever software, but a) Google's expertise in this area is a generation on from the current Nokia's, and b) even Google realised that OIS was really needed and added it in the Pixel 2 in 2017 (and on into the Pixel 3 in 2018 etc.)

Comments welcome. I know you want to get involved, so go for it!

PS. I did ask Nokia for a review/test unit a month ago - and.... nothing. With hardware in hand, I could have both identified these issues earlier and also downplayed expectations until updates rolled out, checking and testing each one and making suggestions. I did this with the 'old' Nokia with the N93, N95, N82, N8, 808 and Lumia 1020, helping report bugs, issues, and also writing about each stage in development on the All About sites. Right now, you'd think that the 'new' Nokia needed all the help it could get in the imaging department?