There has been another significant update to AAWP's own (ahem) much praised UWP application for Windows 10 Mobile. AAWP Universal v1.5 adds more UI tweaks, Disqus improvements and an option to donate to the developer. Thanks (a million) as always to Joe Blumenow..

This is a UWP app, as the name suggests, and is for any phone upgraded to (or running natively) Windows 10 Mobile. Since the last time we featured 'our' app, back in January, we have news from Joe for today's update:

"This is the apps 1st Birthday release, so felt it was worthy of a version bump (to 1.5)…  the ‘AAWP Universal Anniversary Update’!!

We now have comment/like counts, courtesy of the Disqus API!  Ryan at Disqus was a huge help providing the necessary UWP based API wrappers … and there should be more planned in this regard in the future.

I have also added donation IAPs!  I have purposefully not advertised it as a ‘remove ads’ thing, but more of a donation or gift a ‘thank you’… but I do still remove the ads on the first donation.  The reason why I’ve done this is because of the way I’m removing the ads… it’s not fool proof and I can’t guarantee that ads will remain removed – at least not without a future app update.  So I just wanted to try and make that clear.  A donation is 99p (GBP), but users can donate as many times as they like.  They only need to donate the once to have the ads removed and this should carry over to all installs on other devices.

Here's the new version 1.5 of AAWP Universal in action: 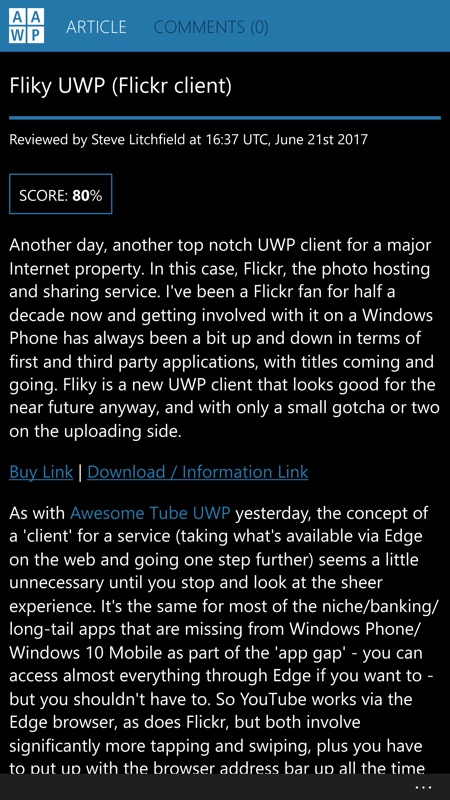 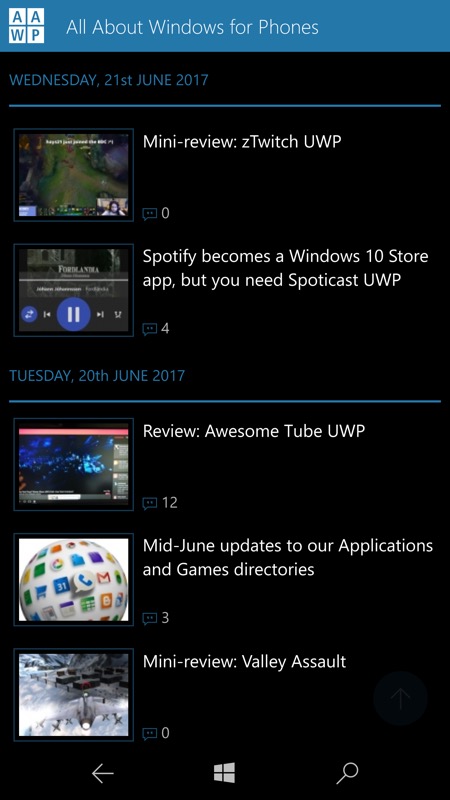 Note the slimline menu control at the bottom - this is 'minimal' - the old style is 'compact' in the Settings... (right) Disqus comment numbers now get shown up in article listings, so that you know where the most social action is... Ahem. 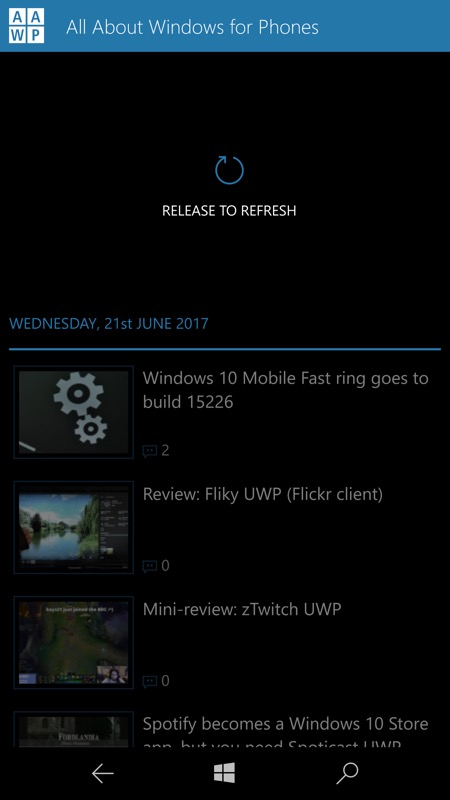 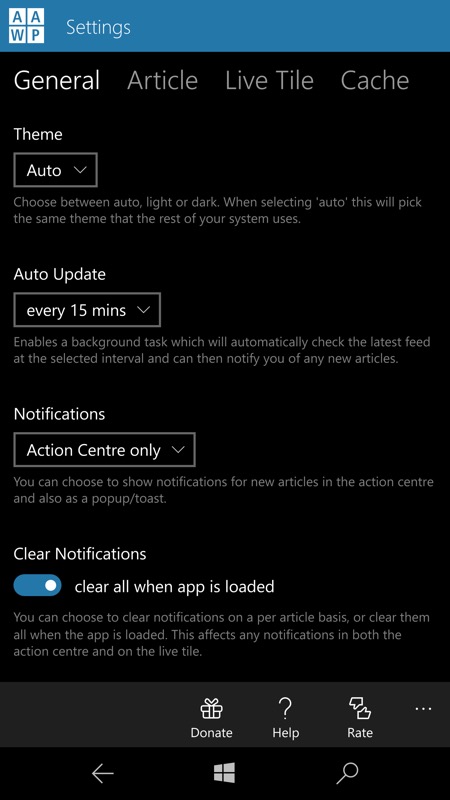 Article lists can now be pulled 'down' in oder to refresh them from the server (though this shouldn't be necessary 99% of the time) (right) Aha - there's a 'Donate' control now! This is for Joe, the developer, with our blessing, for all his hard work (if you want to donate to me, there's this. Just saying...!) 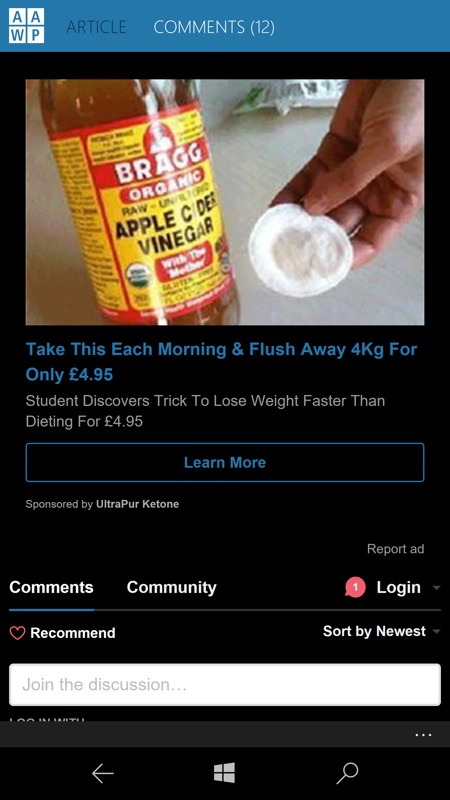 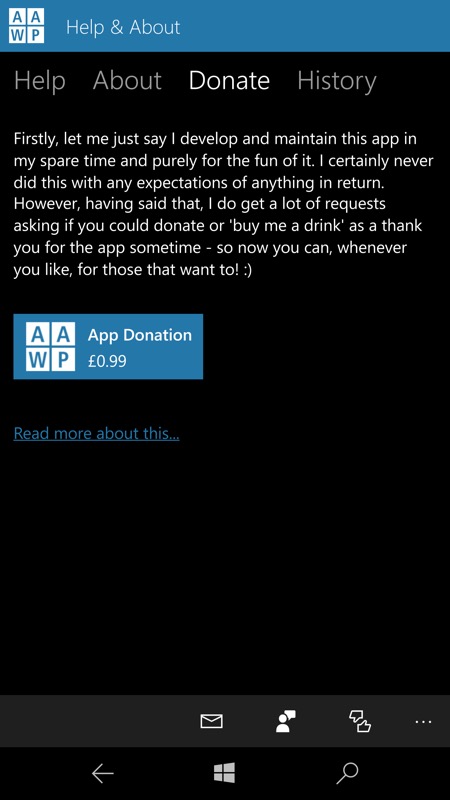 Although there are very few ads on AAWP these days, the comments panes do show them and they're often a bit intrusive. This is the 'before' shot, by the way... (right) Using the 'Donate' control to get to this screen. And then a 99p donation to Joe (to say thanks for the app) is only a tap away! 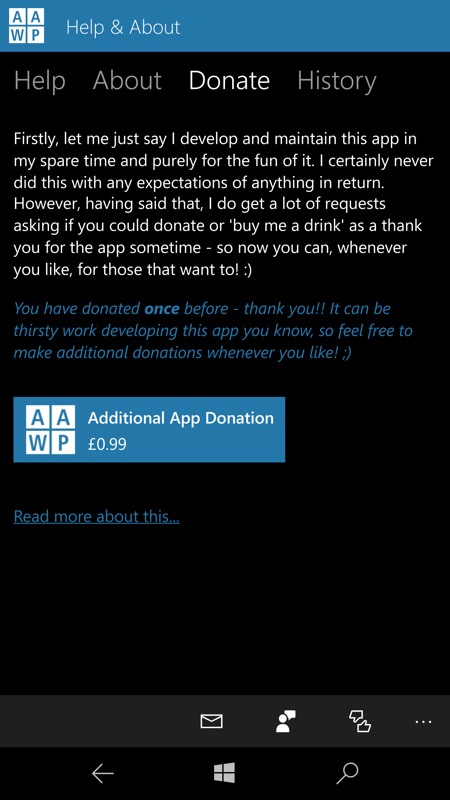 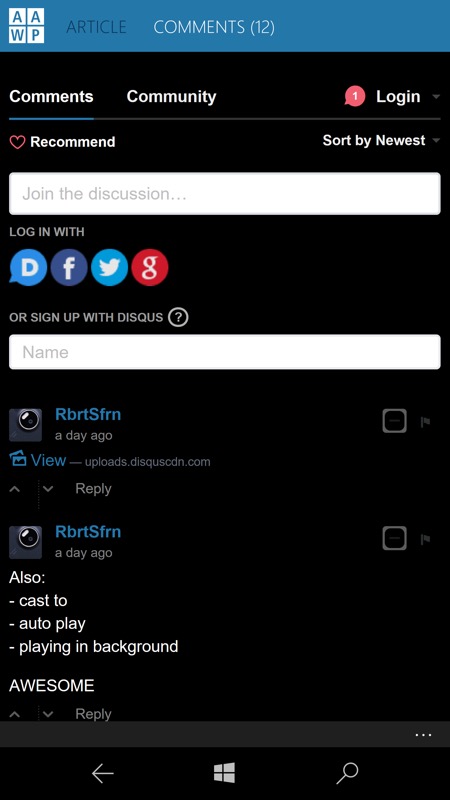 After donation, the button changes, as shown above. Go on, give Joe a quid now through the IAP - as he says, developing is 'thirsty work'! (right) Apart from the warm glow(!), donating also gets rids of the Disqus ads in Comments panes... 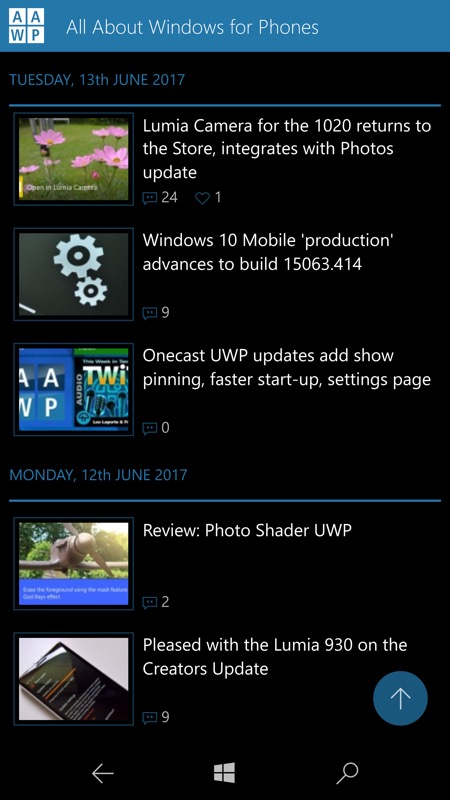 Finally, on long article lists, as you swipe down you'll see this 'back to top' control floating bottom-right. This should be a time saver when you're ten swipes down etc.

With respect to that aawp:// thing:

"I have also added a ‘aawp://’ protocol… this allows links such as: aawp://allaboutwindowsphone.com/flow/item/22240_Stats_from_AAWP_Universal_app_.php to open in the app.  You can test this with the app installed on the desktop, if you paste that link into Run, it should prompt you to open in the AAWP app.  This way other apps/sites could trigger the app like this – for example Ryan said he’ll add this to the Disqus app, so AAWP links should open the app (if installed).  This isn’t quite as integrated as ‘Apps for Websites’, but it’s a good workaround! :)

Comments welcome for Joe, he'll read and take it all in, we promise!

PS. By the way, aside from Rafe being in the podcasts, virtually all the content for AAWP is now being written by me, as you've probably gathered. I/we'd love to have some more guest articles in 2017, so do please get in touch if there's a topic, device or application that you feel strongly about. You can reach me at slitchfield@gmail.com . 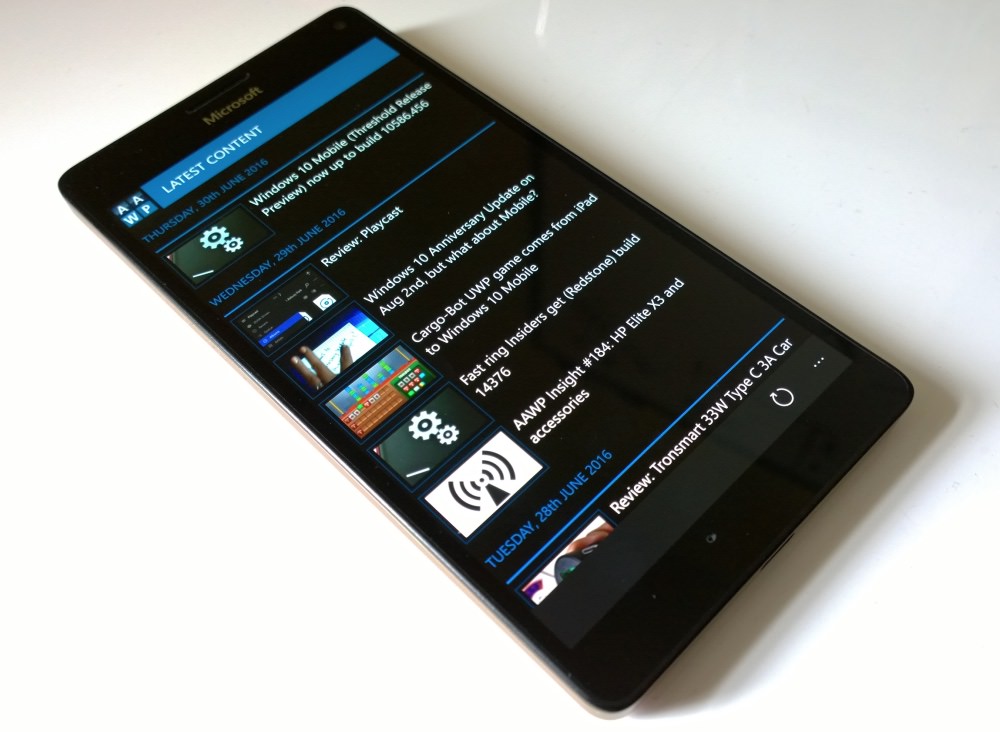